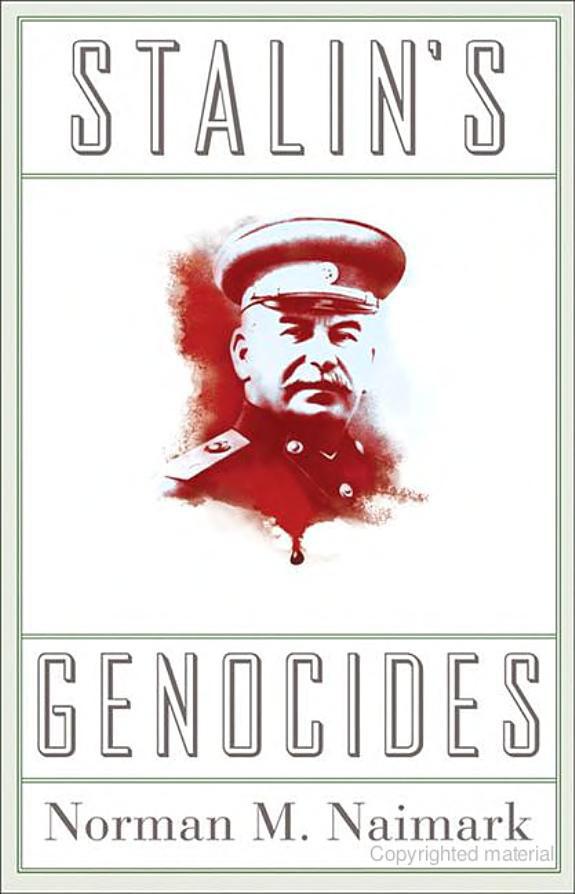 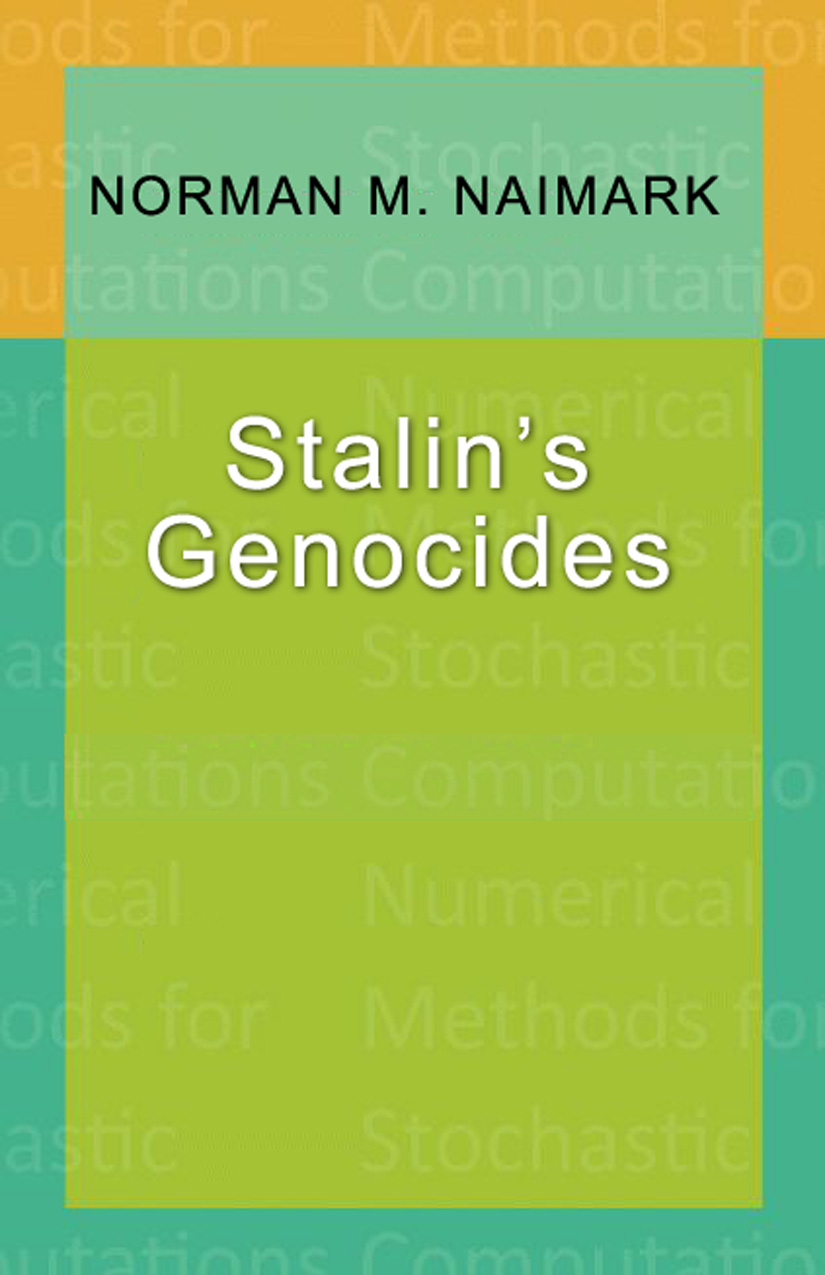 human rights and crimes against humanity

Echoes of Violence: Letters from

a War Reporter
by Carolin Emcke

with a foreword by Jan T. Gross

Torture and the Twilight of Empire from

Algiers to Baghdad
by Marnia Lazreg

and the Tragedy of Civilians in War

How Genocide Was Stopped in East Timor

Requests for permission to reproduce material

from this work should be sent to Permissions,

2. The Making of a Genocidaire

7. The Crimes of Stalin and Hitler

This study grew out of a long-term preoccupation with the history of genocide and the way Stalin and his crimes should be viewed in the context of that history. I explored some of these problems at a series of conferences and symposia that helped develop my views. I should mention in particular the Mellon Foundation Sawyer Seminar Series on Mass Killing at the Center for Advanced Study on the Behavioral Sciences at Stanford, which I organized together with Ronald G. Suny; a conference on “Totalitarianism” sponsored by
Telos
and organized by Russell Berman at Stanford; and a conference in honor of Robert Conquest, held at the American Enterprise Institute and organized by Paul Hollander. I am also beholden to those colleagues who commented on this work at a “Hitler-Stalin Workshop” at Yale, chaired by Timothy Snyder, and at the Workshop of Turkish and Armenian Scholars (WATS) held at Berkeley and led by Gerard Libaridian.

The comments and criticisms of participants at these conferences and meetings proved extremely helpful in sharp-ening my views of Stalin and the genocide question. Several published essays resulted from these talks and papers, viii

and the present book is built on the arguments that are contained in them.1

Similarly, I benefited enormously from the critiques of the draft manuscript by a number of distinguished scholars: Paul Gregory, Hiroaki Kuromiya, David Shearer, Robert Service, Yuri Slezkine, Ronald Suny, Amir Weiner, and Eric Weitz. The readers at Princeton University Press, Jan T. Gross and Lynne Viola, also provided valuable comments and suggestions. Throughout my professional life, I have had the remarkably good fortune of learning from my friends and colleagues in the field. This book, in particular, owes a lot to the input of these readers. Their criticisms, observations, and corrections helped me avoid some pretty bad mistakes and pointed out holes in my argument. They gave me additional sources to read and new perspectives to include. At the same time, I have dug in my heels on a number of issues where many of my friends thought differently. That familiar disclaimer works in this case in spades: I alone am responsible for the views that are expressed in this book.

I also am beholden to my friend and colleague Amir Eshel, director of the Forum for Contemporary Europe at Stanford’s Freeman-Spogli Institute, for having helped arrange the lecture at Suhrkamp in Berlin, which was the inspiration for actually writing a small book on Stalin.

Thomas Sparr at Suhrkamp has been a generous and encouraging editor and a strong advocate of the Stanford-Suhrkamp lecture program. Brigitta van Rheinberg at acknowledgments ix

Princeton University Press has been as supportive and understanding an editor as any author could hope for.

I have also had some very helpful research assistants at Stanford, who have not only chased down sources but also shared their views of the subject with me. None has been more important to the completion of this project than Val-entin Bolotniy, who has become a real friend in the process of doing this work. As usual, the archivists and staff of the invaluable Hoover Institute Archives have been wonder-fully helpful and patient with my requests. My gratitude to Kathryn Ward for her close reading of the book’s page proofs.

Finally, I would like to thank my wife, Katherine Jolluck, my son, Ben, and my daughters, Anna and Sarah.

The darkness that inevitably comes from immersing myself in Stalinism lifts immediately when encountering my joyful family. There is an added benefit in that Katherine is an accomplished historian and superb editor, who reads critically everything I write. This book is dedicated with gratitude and love to her.

This short book—really an extended essay—is intended to argue that Stalin’s mass killings of the 1930s should be classified as “genocide.” This argument is made more difficult by the fact that there was no single act of genocide in the Soviet case, but rather a series of interrelated attacks on “class enemies” and “enemies of the people,” met-onyms for diverse alleged opponents of the Soviet state.

Episodes of mass killing also took a variety of forms, some involving mass executions, others exile in special settlements and camps of the Gulag, where many hundreds of thousands died from the unusually harsh character of arrest, internment, and interrogation, on the one hand, and hellish conditions of transport, housing, sustenance, and forced labor, on the other.

The social and national categories of the supposed enemies of the USSR changed and shifted over time; the justifications for the assaults on groups of Soviet citizens (and foreigners in the Soviet Union) were similarly labile.

Yet Stalin and his lieutenants connected these genocidal attacks to the tenets of Marxism-Leninism-Stalinism and used similar police, judicial, and extrajudicial means of 2

implementing them. Both Soviet party and state institutions were involved, as Stalin applied the impressive instruments of exerting power and control created by the Bolshevik revolution to strike at his opponents and potential opponents, real and—for the greatest part—imagined.

As the result of Stalin’s rule in the 1930s and early 1940s, many millions of innocent people were shot, starved to death, or died in detention and exile. It is long since time to consider this story an important chapter in the history of genocide.

There are a number of legitimate scholarly and even moral inhibitions in making this kind of argument, not the least important of which is the understandable reticence—

pronounced among both scholars and journalists—

to apply an appellation designed primarily to describe the Holocaust, the mass murder of the Jews by the Nazis, to the murder of Soviet citizens in the 1930s. In particular, German and Jewish scholars of the Holocaust will sometimes insist that the Nazi murder of nearly six million Jews was an event of singular historical meaning that cannot be fruitfully compared with other episodes of mass murder in the modern era. The combination of Hitler’s murderous racism and traditional Christian anti-Semitic motifs make Nazi crimes, in the mind of many scholars, a unique genocidal undertaking.1 But even this question becomes more complicated when one takes into account what could be considered Nazi genocidal campaigns against gypsies (Roma and Sinti), homosexuals, and the mentally disabled, not to mention Soviet prisoners of war, Poles, and others.

Related to this issue is the fact that the December 1948

United Nations Convention on the Prevention and Punishment of Genocide focuses on the murder of ethnic, national, racial, and religious groups and excludes—though not explicitly—social and political groups, which were, after all, the main victims of Stalin’s murderous campaigns. Some scholars isolate the Ukrainian killer famine of 1932–33 or the forced deportations of the so-called punished peoples in 1944 to support a claim of genocide against Stalin. Others point to the “Katyn forest massacre” of twenty-two thousand Polish army officers and government officials in the early spring of 1940 as an em-blematic case of Stalinist genocide. But categorizing just these discrete murderous events as genocide, while leaving out others, tends to gloss over the genocidal character of the Soviet regime in the 1930s, which killed systematically rather than episodically.

Another objection to including Stalinist mass killings in the concept of genocide has to do with the special character of ethnic and national identity when thinking about the “human race.” Humanity is comprised of a marvelous diversity of peoples, each of whose distinct character, even if “invented,” in the famous formulation of Benedict Anderson, deserves special protection. As we will see, the development of the concept of genocide itself was closely tied to this idea. Yet the U.N. Genocide Convention also protects religious groups, despite the fact that their essentially ascriptive nature does not carry the same valence as ethnic and national groups. Jews and Armenians were killed as peoples, not as religious groups, though religion was used 4

as a marker of ethnicity, much as it was in the case of Serb attacks on Bosnian Muslims in the 1990s. But the obligation of protecting ethnic and national groups, as well as religious and racial ones, from mass murder should not obvi-ate the need to protect political and social groups from the same horrendous crime, especially when the Soviet Union insisted that these groups not be included in the Genocide Convention. Certainly the victims and their progeny would have difficulty understanding the moral, ethical, and legal differences—not to mention historical distinctions—

between one form of mass murder and another.

At the same time many observers think that the concept of genocide would lose its historical and legal salience, would in some senses be “cheapened,” by broadening the potential categories of victims to include social and political groups. It is certainly the case that the term is used im-precisely and irresponsibly by diverse, sometimes loosely defined, groups of people claiming genocide victim status.