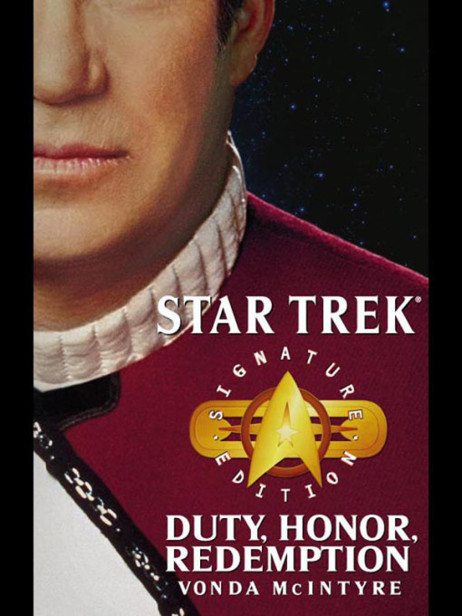 This book is a work of fiction. Names, characters, places and incidents are products of the authors’ imagination or are used fictitiously. Any resemblance to actual events or locales or persons, living or dead, is entirely coincidental.

STAR TREK is a Registered Trademark of Paramount Pictures.

This book is published by Pocket Books, a division of Simon & Schuster, Inc., under exclusive license from Paramount Pictures.

All rights reserved, including the right to reproduce this book or portions thereof in any form whatsoever.
For information address Pocket Books, 1230 Avenue of the Americas, New York, NY 10020

These titles were previously published individually by Pocket Books.

For Jane and Ole, with love & snarks

Introduction
Harve Bennett: The Man Behind the Movies

In a way, collecting these three stories into a single volume seems like a no-brainer. We now think of
Star Trek II: The Wrath of Khan, Star Trek III: The Search for Spock,
and
Star Trek IV: The Voyage Home
as a trilogy. But
Star Trek II
had been conceived as an ending—with the demise of a certain Vulcan—rather than as a first act. It was Harve Bennett, the film’s producer and cowriter, who broadened the tale of Spock’s death into one of resurrection and reunion. Given that Bennett had never seen
Star Trek
before producing these amazing stories, it was a remarkable feat.

“I was an ignoramus about
Star Trek,”
Bennett admits. “My own show,
The Mod Squad,
had been programmed against it while they were in their first run. And I watched
my
show.” So when Bennett was asked to create a follow-up to Paramount’s blockbuster,
Star Trek: The Motion Picture,
he had to start from scratch.

“I spent three months watching
Star Trek
episodes,” Bennett says. “It was a journey into the dark, but I sure got to be a
Star Trek
appreciator. I finally zeroed in on two episodes, ‘City on the Edge of Forever’ and ‘Space Seed,’ as potential source material.”

Recalling that many years earlier he had met “Space Seed” guest star Ricardo Montalban, Bennett called the actor to ask how he’d feel about co-starring in a
Star Trek
feature. “Ricardo said, ‘Yes. That would be fine,’ ” Bennett recalls. “And that was the genesis of
Star Trek II.”

With two key elements in place: “a splendid guest star, and the framework for a classic storyline of ‘man against super man,’ with Khan as a worthy adversary for Kirk,” Bennett and cowriter Jack Sowards began formulating a story. After Art Director Mike Minor showed them a science article about terraforming—making dead planets life bearing, Bennett says, “We took that idea to the next level: life from death. It became the basis for the Genesis Planet and for bringing Kirk’s son and a woman he had loved back into his life.”

Director Nicolas Meyer soon joined the team. They had one pressing problem to overcome—actor Leonard Nimoy had expressed a reluctance to return in the role of Spock. “We had to lure Leonard back in,” Bennett chuckles. “I said, ‘What if we pulled a
Psycho?’ ”
In that film, a major star, Janet Leigh, is killed in an early scene, throwing the audience off-kilter. “So we went to see Leonard,” Bennett says, “and told him, ‘We’re going to give you a great death scene.’ Leonard said, ‘Oh, that’s wonderful!’ and signed on.”

Unfortunately, it took only days for that “wonderful” idea to leak out, and for thousands of letters protesting the rumor of Spock’s impending death to pour in. So Bennett had another inspiration: the Kobayashi Maru test, meant to convince viewers that the character only
appears
to be killed in that early scene. The diversion worked—until, of course, his heartbreaking death at end of the film.

Qualms about Spock’s death, however, eventually developed among the filmmakers as well. “The cast and crew started lobbying,” Bennett sighs. “By now Leonard really liked being back with this gang. So I suggested, ‘Let us lay a little seed here.’ ” The producer, after all, had experience with bringing back the dead—“I had resurrected the Bionic Woman,” he grins. “So I suggested that Spock perform a mind meld and say something. Leonard said, ‘I got it. Just shoot it and watch.’ When the camera rolled, he put his hand on McCoy’s head and said, ‘Remember.’ It was perfect,” the producer recalls. “It was all we needed.”

Two days after
Star Trek II: The Wrath of Khan
opened to record box office sales, Bennett got a phone call from Paramount. “It was nine o’clock in the morning,” he says. “I heard, ‘Okay. Let’s get started on number three right now.’ ”

In Hollywood, this was an unprecedented mandate. “I wrote the last scene of
Star Trek III
that same day,” Bennett says. “And it was exactly the way we later shot it. ‘Jim. Your name is Jim.’ So I knew exactly how the picture would end, with a restored Spock, and that a lot of consequences had to be dealt with. But when? In this movie? Or the next? That’s when I started thinking of this as a
three
-act play.”

Bennett worried that the Genesis device could be a potential weapon hanging over
Star Trek
’s future. “An analogy with the atomic bomb suddenly came clear to me,” he says. “I realized that it had to backfire, and the only way it would was if it had been fraudulently created in the first place. So I decided that David Marcus had done something irregular that had made the formula faulty.”

This gave Bennett three things to work with: a pressing timeline for the crew’s rescue attempt, the end of the Genesis threat, and a way to dispose of the Marcus family. “The pieces just fell into place,” Bennett says. “I wrote it in six weeks.”

Bennett again looked back to the original television episodes for a villain. “I thought, ‘What could be more frightening than a berserk Klingon?’ ” And he gave the story a very dark tone; after all, he says, “We were discrediting Kirk’s son.” The darkness also provided a classic backdrop for resurrecting the dead, and supported Bennett’s confidence that, “After the darkness would be the sunlight of Spock’s being alive again.”

With Leonard Nimoy signed on as director, the team planned a surprise for their audience: the destruction of the
Enterprise.
Bennett explains, “Spock had died to save the crew. Now the
Enterprise
would be sacrificed to save Spock.”

Four days after the successful opening of
Star Trek III,
the go-ahead call came from Paramount. Leonard Nimoy again signed on as director. “It was Leonard,” Bennett confirms, “who said, ‘The crew has to come back and face the music, but there must be something threatening them other than the court-martial. What if something was obliterated in
our
time that proves to be necessary for life in
their
time?’ ”

Harve Bennett is a producer. In addition to writing, his job is to watch the budget, and this time, he admits, he took it a bit too seriously. “I said, ‘What if it’s a snail darter?’ ” Bennett laughs, noting that at the time the tiny, endangered fish was in the news. “If we said snail darters turned out to be the panacea for life, then we could…’ And Leonard looked at me like I was nuts and said, ‘What is that, about an inch long, a snail darter?’ ” “Yeah, we wouldn’t have to do any special effects!” After a moment of cold silence, Bennett realized he was fighting a losing battle. “I said, ‘Never mind, we’ll get something big.’ And Leonard replied, “What about whales?’ I told him, ‘We can’t do another orca movie with the same black and white fella they have at Sea World.’ And that’s when Leonard said the magical words: ‘What about a humpback?’ ”

Soon the filmmakers knew that they would write a lighter story, it would include whales, and they would “beam” the whales up in order to solve a problem. They also decided they would use a female in a heroic role. “With those things in place, we called Nick Meyer and said, ‘Can you do a rewrite?’ ” Bennett laughs. “Nick said, ‘Sure. I’ve got two weeks.’ He decided that I should write the first part of the movie, which is in the twenty-third century, that he should write the twentieth century sequence on Earth, and that I would do the last section, from when they slingshot back around the sun. And that’s exactly what we did.”

“I’ve always looked at the movies as a three-act play,” Harve Bennett says.

And so do we.
The Search For Spock
resolves a second act crisis.
The Voyage Home
delivers a final redemption and resolution. The level of sacrifice goes up and up, until the
Enterprise
crew saves Earth herself.

And that’s worth a read.