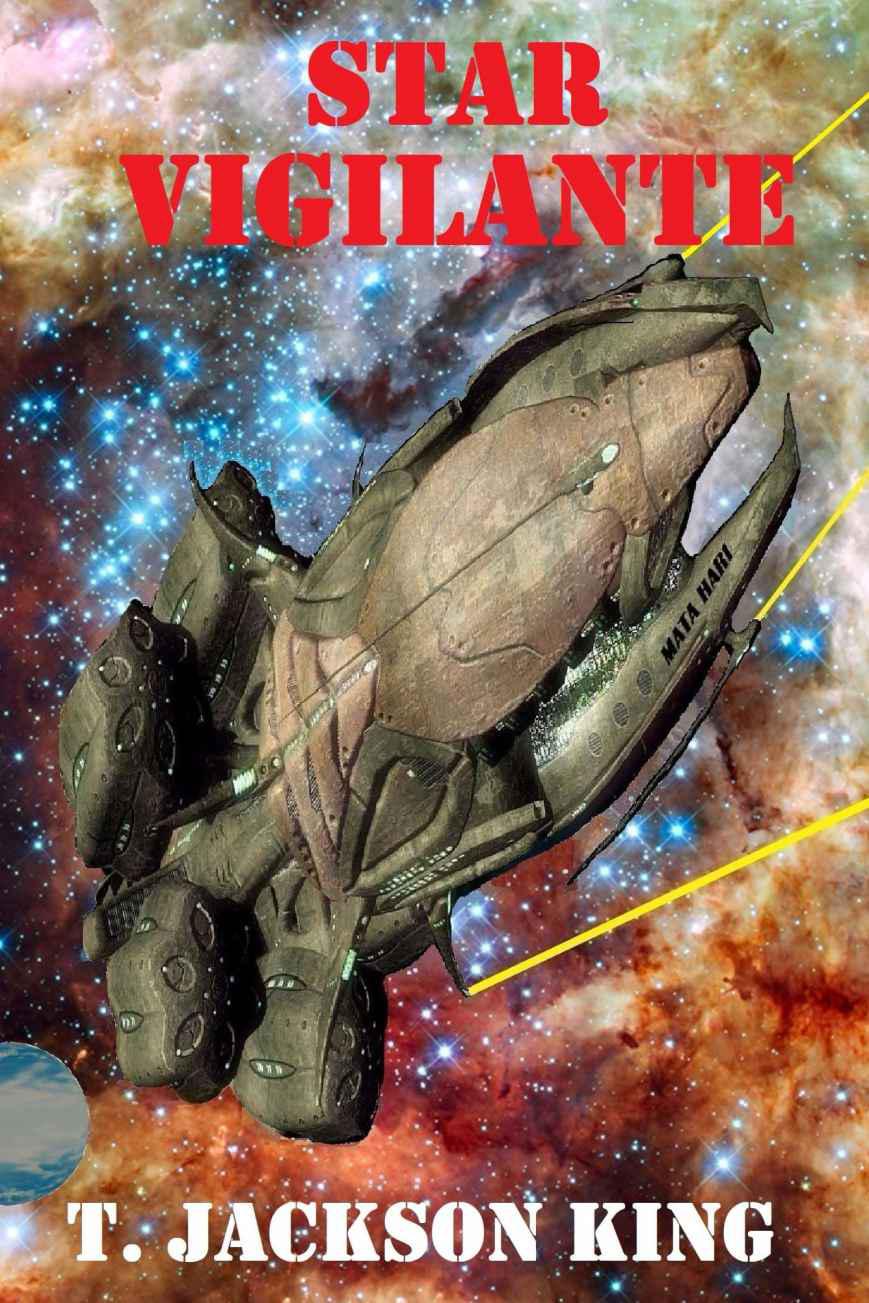 Book One of the Vigilante series

To my
son, Keith Eric King, Special Agent, Office of Special Investigations, USAF (ret.), who put his life on the line daily during three combat tours in the Middle East and in many other countries around the world which cannot be named due to security considerations.

First thanks go to my wife Cathy, who served as First Reader on this novel. Other First Readers who helped include Mia McLeod and Alicia Solomon. Second thanks go to William Dietz for a comment on the opening of Chapter One that I adopted. Finally, the military SF stories of David Drake, a true veteran of a major war, have been the inspiration for this book and its sequels.

This is a work of fiction. All the characters and events portrayed in this novel are either fictitious or are used fictitiously.
All rights reserved. No part of this book may be used or reproduced in any manner whatsoever without written permission except for brief quotations for review purposes only. Prior publication: Chapter One as “Paladin” in
Absolute Magnitude
, Fall/Winter 1997

A lizard-green laser beam hit Matt’s right shoulder and splintered into thousands of low-power sparkles as his combat suit’s sapphire crystal coating broke the beam into hundreds of pale green flares that filled a lonely corridor of Hagonar Station.

Attack
!
screamed Suit’s onboard Combat Information System as it flooded his mind and nerves with multiple datastreams.

One stream illuminated his attacker, a six-legged crab-like alien with natural chitin armor that it may have assumed would be protection enough against a two-legged humanoid who wandered the back corridors of the space station and wore only an armored lifesuit. The attacker had pretended to be a silvery-
grey outcrop of the corridor, betting on the faint orange light to shield it from early detection by Suit’s sensors. A bad bet.

Blinking his right eye twice, Matt approved Suit’s plan to hit the alien’s exoskeleton with six titanium penetrator darts, each dart carrying a biogel able to quickly kill any carbon-based lifeform. A squirt of the biogel was enough, but Suit believed in “Kill Thrice, Regret Never” —so a third counterstrike followed.

“Surrender and—” the crab-like alien’s Comdisk began to say.

Then it staggered as the penetrator darts hit its chitin shell-body, shuddered from the biogel neurotoxin, then it screeched in pain as Suit flashed ultrasonic beams against its shell, causing internal organs to liquefy as the resonance frequency for its flesh was reached and maintained by Suit’s feedback system.

Matt turned away from the low-caste genome harvester, heading inward to the dive bar where he was to meet a possible Patron, someone who sought to employ his combat capabilities.

His humanoid form, a rarity in the Anarchate galactic culture, made some aliens underestimate his capabilities. The crab-like alien had been the third effort by one of Hagonar’s freelance genome harvesters to collect Matt’s genetic code for sale to the highest bidder. A bidder who would then make copies of Matt, copies programmed to follow any order given by the bidder.

In a galaxy ruled by the Anarchate, everything was for sale, from infants and children, to the genomes of defenseless species, even whole star systems were bought and sold. The fact that Matt sought to right the wrongs of a society millions of years old by serving as a Vigilante for hire did nothing to change the system. Still he had a promise to keep, a promise made to a dead love, the last person he had cared for . . . .

An hour later he still sat in the bar
Wiggles
, wondering why the humanoid form so interested the exotic critters who filled the alien version of a booze-drug bar. It distracted him from thinking about her, Helen, the woman who had loved him, and whom he had loved. Until she died, leaving him to find a life purpose without her.

He sighed, his breath filling the armored helmet of his Mitsubishi-Toshiba Cyborg Combat Suit.

Work. That’s what he needed. That’s why he sat in a third-rate dive like
Wiggles
, stuck away in a corner of a backwater space station, waiting for his appointment with a possible Patron . . . and she was late.

For a Vigilante like himself, hanging around one place too long isn’t smart. As the corridor episode showed, you can get killed by staying in place. The code of a Vigilante is simple: track ‘em, strike ‘em, and be elsewhere when the Anarchate
Battleglobes show up.

Matt squinted into the clinging shadows of
Wiggles
, searching for the woman who’d answered his Job Board listing.

The listing had been brief enough:
Vigilante for Hire; Have Starship, Will Travel
. He smiled, recalling the ancient vidpic from which he’d stolen the words. He’d always liked the vidpic character Paladin. Their features were similar, though he was Amerindian/French by birth whereas Paladin had a strong Hispanic heritage. But the man had lived in a simpler time. A time when little Earth had thought itself the center of the universe.

Once again he wished humans weren’t spread so thinly across a galaxy infested by thousands of alien species, with no justice, no law, and a soul-destroying culture called the Anarchate. Why did he live when whole species sometimes died in the far reaches of space? What could he do, a lone human, against a cultural system already ancient when
homo habilis
walked the African savannah? But wishing doesn’t change reality—such as the fact that Earth had been ‘found’ by alien genome harvesters in A.D. 2040, and had never been the same since. Nor had he, since Helen’s death. Matt yearned for her touch, her kiss, her warm embrace, the smell of her hair, the feel of . . . .

He pushed away the memory pain. But once again, he felt exposed. Vulnerable. Weak.

That was not how he felt when linked to his alter ego, the self-aware Dreadnought-class starship
Mata Hari.
Thanks to her rescue of him as he drifted among the stars in a lifepod, the two had become one entity. Matt had learned what it was like to think at computer speed, to sense scores of inputs simultaneously and to “wear” the starship like a suit of clothes, with each movement of his directing some function of
Mata Hari.

With a slow blink of his left eye Matt raised his faceplate. The odors of
Wiggles
entered. He wrinkled his nose.

It stank. The air reeked of alien pheromones, rancid garbage, metal-scouring cleansers, disinfectants, and the acrid fumes from seven types of tobacco-analogues. Taste next hit him. The metallic bitterness of recycled air coated his tongue, telling him the dive’s titanium recycling filters hadn’t been cleaned in a long time. Next came sound. Screeching, squalling, heterodyning sounds filled
Wiggles
, as might be expected at a disreputable bar/restaurant/pleasure dive in the CHON section of Hagonar. Matt winced, wishing he could shut his ears as easily as his mouth.

Where the hell was that Patron?

Sighing, he looked around.

His neighbors were supposedly other lifeforms constructed of carbon, hydrogen, oxygen and nitrogen, who radiated at a moderate temperature and breathed oxygen. However, he counted four canister tanks encrusted with milky-white ice—it seemed the methane breathers were slumming tonight. But even stranger beings toured
Wiggles
. Not far beyond his alcove there glimmered the iridescent blue crystals of a barium titanate alien; its piezoelectric crystals fluxed and changed visibly, engaging in thought. In the middle distance, shapes moved about the circular, amphitheater-like room, its domed ceiling festooned with parallel bars for the avian and forest-evolved types.

Distantly, among the shadows of the room’s far side, there moved a humanoid form, one vaguely suggestive of a woman. His Patron? Maybe. Maybe not.

The humanoid form that resembled a woman spotted him and moved toward his alcove, still twenty meters away.
Ummm.
Not a hallucination.

Time to go to work.

Matt blinked to lower the faceplate, switched to Eyes-Up mode, and activated the virtual-reality display.
Wiggles
took form inside his helmet, the orange-lit room relegated to the faceplate’s right quadrant. He studied the circular room’s layout, the placement of lifeforms, energy sources, and motion vectors—all in three dimensions that rotated within a miniature graphics display. A great thing, the display. It could place his point-of-view at the ceiling, at either entrance to
Wiggles
, or in his own alcove. He switched focus to the faceplate’s left side as new data shimmered into being. A downlink from the feminine AI that was Mata Hari glowed like a red cloud. Within that cloud floated Hagonar Station, nearby ships, their classifications and weaponry ratings, unpowered asteroidal debris, gamma and beta radiation levels, solar wind fluxes from Theta Aurigae’s two stars, and a thousand other details. Too many details. But the flood had just begun.

Matt went to gestalt focus, simultaneously seeing the faceplate images and the inner surfaces of his contact lenses. On those lenses flickered readouts from the twelve weapons systems of Suit. All showed green-light Ready status. Then, filled with an unnamable ecstasy, existing both within and outside Suit, he surrendered his will and underwent Systems Checkout by Suit’s CPU.

Hundred megawatt laser pulse-cannons stirred to life on either shoulder, tracking around the room, seeking Lock-On. A thump-crump sounded from each bicep as ten rounds of High Explosive Discarding Sabot shells cycled into miniature rocket-guns; they made each bicep look like a bagpipes factory. On his chest, the pulse-Doppler radar whined on. Millimeter-wavelength pulses ranged out over the room, probing the inner composition of those lifeforms not wearing a stealth or radar-reflective body covering. Hard against his spine, the rocket launcher backpack grumbled down to Standby, told by Suit’s CPU the range was too close for a kiloton atomic. But on either hip, and snugged up against his belly, backup magnetohydrodynamic power units pulsed to life.

We are ready!
The MHDs screamed, sounding like little electron bees. They stood ready to feed surge-power to the shoulder lasers, to his fingertip lasers and to Suit’s tractor and pressor beam emitters. Other weapons systems flashed by, also powered on. Ultrasonic vibers. Fire-and-Forget Nanoshell launchers. Nerve gas dispensers.
“Now? Can we go now?”

God, they were so eager. Almost humanly eager. Then the ecstasy he called
ocean-time
eased off. Checkout done, Suit delivered a new display to his central faceplate, devoted solely to the approaching female humanoid.

Fifteen meters away
, Suit told him via his inbuilt PET sensors.

Matt focused on that central image.

Microwave sensors displayed clearly her skeletal structure. A subsidiary readout confirmed it as calcium-based, but with a titanium upgrade for strength. Infrared bio-sensors showed a body temp ten degrees above human-normal. Pulse-Doppler revealed a double-heart that beat steadily; that was a bioupgrade for a High Threat environment. Gas spectrometers documented the exact amount of carbon dioxide she exhaled. The heatmap glowed with thermal concentrations—at her head, both breasts, each heart, her hands, the groin, and her feet. Mech sensors showed she carried only a laser handgun, riding in a holster on her right hip. A machete rode on her left hip. Her black environment suit showed up as a vacuum-resistant monomolecular film, its oxygen reservoirs presumably strapped onto the woman’s back, buttocks or rear legs—and thus out of direct line-of-sight.

The Braided World by Kay Kenyon
Thing to Love by Geoffrey Household
The Bonded: The Allseer Trilogy Book I by Kaitlyn Rouhier
Stella in Stilettos by Romes, Jan
Friends and Enemies (Gwen Farris Book 5) by P.S. Power
Home to Caroline by Adera Orfanelli
Do Me Baby (The Beaumont Series) by Angie Daniels
Reunited by Ashley Blake
Children of a Dead Earth Book One by Patrick S Tomlinson
Love's Awakening by Stuart, Kelly