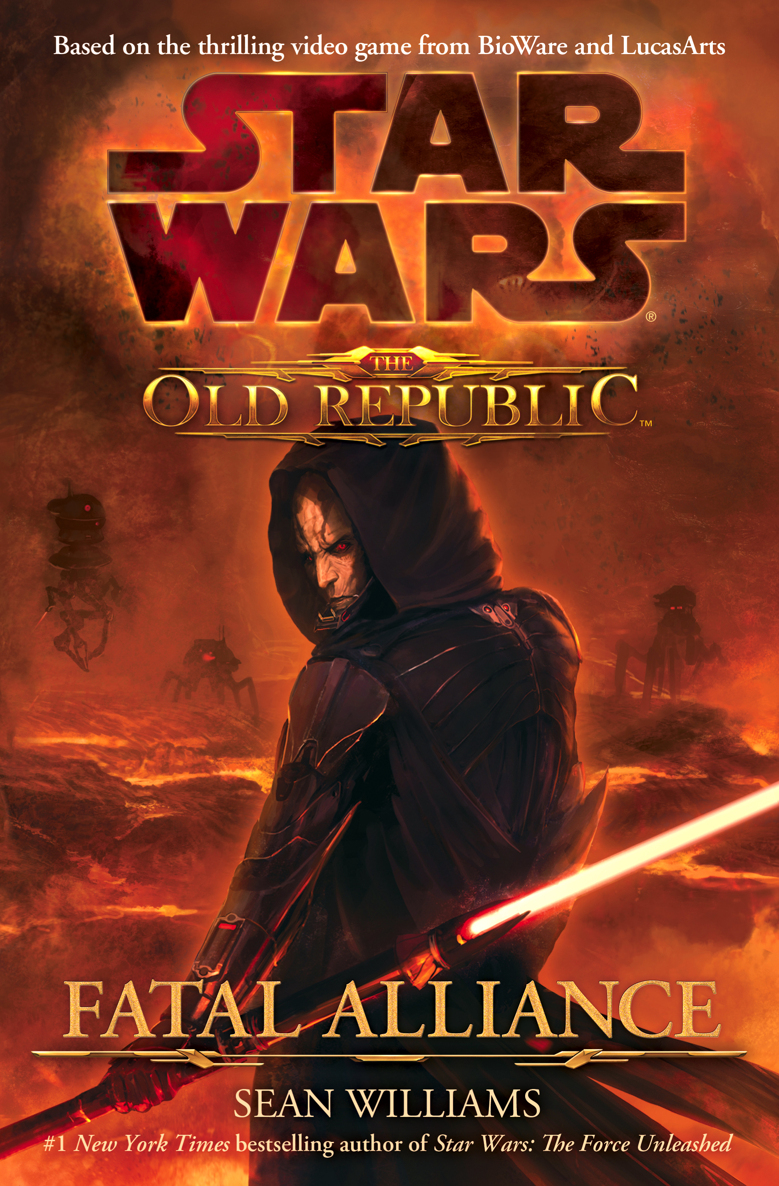 The
light star cruiser looked deceptively insignificant against the
backdrop of the galaxy. To the keen eye of a pirate, however, it
displayed several desirable qualities: no Imperial or Republic
markings; only moderate weaponry and shielding; a crew compartment
barely large enough to hold a dozen people; no escort or accompanying
vessels.

"It's
your choice, Captain, " hissed a guttural voice into Jet
Nebula's ear. "But don't take too long about it. Our friend here
isn't going to sit still forever. "

The
smuggler calling himself "Jet Nebula" enjoyed keeping his
first mate on tenterhooks. He harbored no ill feelings about the
mutiny in and of itself. The moment the Auriga Fire stumbled across
something really valuable, a takeover attempt had been inevitable. He
had hired Shinqo knowing exactly that and lost barely a minute's
sleep since. Dealing with scum was part of the job.

He
didn't like needless violence, though. The snub nose of a blaster
digging into Jet's side was pure overkill.

"Well?"
Shinqo prompted him in Rodese as he pretended to dither.

"Keep
your shirt on, " Jet said in mock-protest. "We only
interdicted them a minute ago. It's way too soon to plot another
jump. "

"Just
don't take any chances, " Shinqo said, emphasizing his point
with another jab of the blaster. "And be glad we don't want your
ship, as well. "

Something
heavy creaked to Jet's right. The boxy shape of Clunker swayed into
view, dented and dusty, photoreceptors glowing bright. Jet shook his
head minutely, and the droid backed out of sight again.

"All
right, then. " Jet took the captain's seat and punched the comm
active. "Since you put it so nicely, Jet's see who these guys
are before we steal the hide off their backs. "

The
star cruiser's running lights blinked and flickered against the
black. Its systems were still settling after their sudden wrench from
hyperspace, but Jet felt sure the comm was working by now. All ears
aboard would be straining to hear what the rugged ship hanging off
their bows had to say.

He
resorted to short, simple phrases that had served him well enough in
the past: "You're nicked, my beauty. Stand by for boarding. "

"Negative"
came the immediate reply. Male, brusque, and human, most likely. "We
do not recognize your authority. "

That
was a new one. "Who in their right mind would invest any
authority in the likes of us?"

"You're
a privateer. You work for the Republic. "

"Now,
that simply isn't true. " Not anymore, anyway, Jet thought.
"We're humble grifters of an independent set, and you happen to
have stumbled across our patch. Submit easily, and I'll see that my
bloodthirsty first mate doesn't blast you all on sight. "

"That
won't happen. We're on a diplomatic mission. "

"To
whom? From where? If I had a credit for every time someone tried that
line, you wouldn't be talking to me now. "

There
was a long pause. "All right, then. What will it cost for you to
let us go?"

Jet
looked at Shinqo, who was calling the shots. Shinqo's true employers
were the Hutts, and sometimes a bribe was worth as much as booty,
after the cartels took their cut.

The
Rodian shook his head.

"You're
clear out of luck, mate, " Jet told the person on the other end
of the comm. "Best vent those air locks, smartish. We're coming
in and don't want to scuff the merchandise any more than we have to.
"

The
star cruiser had nothing to say to that.

Shinqo
barked into a communicator as Jet brought the sublights into play.
"Fekk, Gelss, get ready for action. "

The
two Sullustans were part of Shinqo's treacherous lot, and Jet
wouldn't mind if they paid the price for the mutineers' haste. Jet
had a strong feeling the cruiser wasn't going to give up lightly. Its
lines were too lean, its hull too polished. The name on its starboard
side-the only ID it was sporting-said CINZIA in bold black letters,
recently affixed. That showed pride.

No,
the owners of this ship might not be above offering a bribe to
continue on their way, but they wouldn't roll over easily. Few did,
these days. With the Empire and the Republic still at each other's
throats, lacking but a declaration to call their squabbling an honest
war, people were taking the law into their own hands. There was so
much to lose and so little to gain on every front.

So
much for the Treaty of Coruscant. And so much for avoiding
unnecessary bloodshed, he thought, reminded of Fekk and Gelss. Be it
red or green, blood was all the same. The less spilled around him,
the smaller the chance it would be his, one day.

"What
are we going to tell our former bosses when we haul in empty?"

"That's
not my problem, " gloated Shinqo. "On flimsi, you're still
captain of the Auriga Fire. It's your job to come up with an excuse
the Republic will believe. I'll be long gone before then, with the
credits. "

True
to form, then, the Rodian was planning to stiff Jet at both ends of
the deal. That changed everything. Jet glanced at Clunker, who was
standing innocently in front of the entrance to the cockpit. No one
would get in past him, if push came to shove. More important, no one
would get out...

Barely
had the Auriga Fire closed half the distance between the two ships
when Jet's misgivings about the cruiser were violently justified. A
scattering of red lights danced across the instrument panels; a
buzzer harshly sounded. Jet studied the display for a split second,
making absolutely certain of what he was seeing, before raising every
shield to full and punching the sublights to maximum.

The
Auriga Fire rolled edge-on to the cruiser and Shinqo staggered
backward. Clunker caught him, deftly twisting the blaster out of the

Rodians
grasp as he did so. At that moment the star cruiser that should have
been their prize exploded, sending a blast of pure white light
through every viewport, screen, and shield.

Jet
had done more than just back the ship away. He had covered his eyes,
and now he peered warily through his fingers at instruments gone
completely haywire. There was barely anything left where the Cinzia
had been. Thuds and clangs registered on the hull as bits of the star
cruiser rocketed by.

Shinqo
was barking into his communicator again, quick on the uptake, but not
quick enough by half. "Who fired? Who ordered you to fire?"

"No
one did, " Jet said. "The ship blew itself up-and if I
hadn't caught the neutrino spike from the drives before they went,
we'd have been toasted, too. "

Shinqo
rounded on him as though he'd planned this all along. "I should
shoot you right here. "

"With
what, mate?" Jet nodded at Clunker, who pointed the Rodian's own
blaster into his chest. Jet enjoyed the confusion nakedly displayed
on his mate's green, leathery face. "Let's start this again,
shall we? We work for the Hutts now. I get that. One master's as good
as any other, provided the cut's the same. But we all get equal
shares in that cut, right? Or I tell the crew, who will be spoiling
for the fight they just missed. They won't be happy that you were
about to rob some of them. And I tell Clunker here, who badly needs
another oil bath, to tighten his grip on that trigger and send you
after the crew of that ship, whatever dim part of creation they
inhabit now. Get it?"

Acceptance
replaced anxiety on Shinqo's face. His hands came up.

"Here,
now, Captain, there's been some kind of misunderstanding. "

"Sure,
sure. You'll get your share. We all will. I never intended it
otherwise. "

"We'll
sort them out-together, like. It wouldn't be fair to leave it all up
to you. "

"I'm
relieved to hear that, lad. " Jet nodded at Clunker, who flipped
the blaster over and handed it back to its owner. "While I'm
captain of this ship, as written on flimsiplast, Barabel hide, or
whatever, I expect a certain degree of civility and common purpose.
So long as I have that, we're all going to get along fine. "

He
swiveled around to face the instruments, confident that Clunker would
stop anything untoward happening behind him. And confident also that
the Rodian was smart enough to recognize a compromise when he saw
one. Jet didn't mind who paid him, just like the Hutts didn't care
who handed them their treasure, so long as it was theirs. It all came
out in the wash, for those left standing.

"Let's
see what remains of our sorry friend out there... "

The
debris field was expanding fast. Sensors tracked the largest chunks,
many of which were human-sized or even bigger. That surprised him. A
drive blowout usually left only slag and dust.

"That
looks like part of the forward section, " said Shinqo, leaning
over Jet to point at a screen.

"No
witnesses, " said the Rodian with satisfaction.

"That's
normally our job, " said Jet, although he had never killed a
single person he'd robbed in all his years of pirating-not after he'd
robbed them, anyway. Broken a few hearts, sure, and busted a few
heads, but nothing worse. "Don't think they were doing it for
us. "

Shinqo
rubbed his chin, making a dry rasping sound with his fingertips. Now
that the situation between them was resolved, he had returned to
being a proper mate. He had the makings of a good one, when greed
didn't get in the way, otherwise Jet would never have taken him on in
the first place. "They had something aboard, something they
didn't want us to get ahold of. "

"Something
worth more than their own lives?" Jet turned to meet Shinqo's
slitted eyes. "That sounds pretty valuable to me. "

"Exactly
what I was thinking. " Jet indicated the copilot's seat. "Strap
yourself in and take control of the tractor beam. Let's see what we
can find. "

The
Auriga Fire came about and began scouring the remains of the ship
whose journey they had intercepted. A niggling feeling troubled Jet
Nebula as he did so. It felt like guilt, and he told himself not to
give in to it. He hadn't killed the crew of the Cinzia. They had
pulled that trigger all by themselves. It was just hard luck that
their path had crossed his, and his good fortune to be breathing
afterward. If his fortune continued to hold, he might yet make a
profit from this deep- space run, and then, finally, he could hire a
slightly more reputable brand of scum and get back into smuggling
again.

If I Did It by Simpson, O.J.
Carolyn G. Hart_Henrie O_02 by Scandal in Fair Haven
Prelude to a Dream by Rebekah Daniels
Fit to Kill by James Heneghan
Elm Creek Quilts [10] The Quilter's Homecoming by Jennifer Chiaverini
Acceptance (Club X Book 5) by K.M. Scott
The Woman Who Fell From Grace by David Handler
Blood Symmetry by Kate Rhodes
Alien Romance: Captured by Sweet Alien (Uoria Mates Book 1): A Sci-fi Alien Invasion Abduction Romance by Ruth Anne Scott
Almost to Die For by Hallaway, Tate