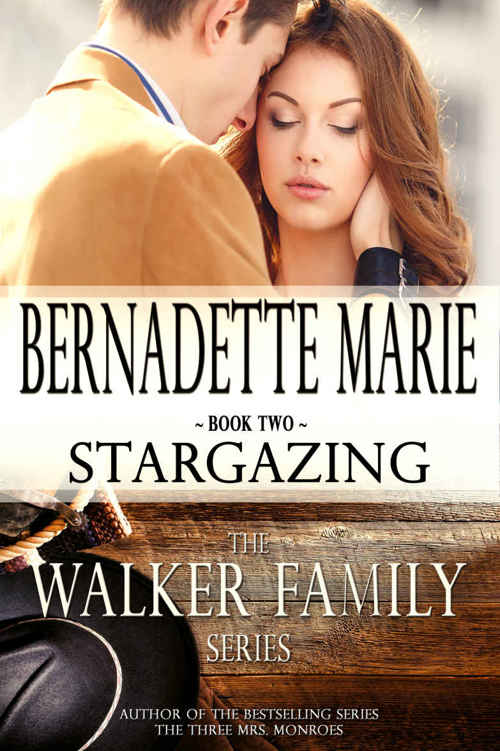 That is what I see when I look at our lives.

It’s as if I’m Stargazing.

To the five Stars of my life: I enjoy watching you shine. I love you to the stars and back.

To my brightest Star: You are my sun but you let me shine and for that I am forever grateful.

To my mom, dad, and sister: Thank you for allowing me to always let my mind wander into the stars as a child. I’ll never outgrow that.

To Connie, Clare, and June: You are my trio of light. Just when it seems that the sun will set, it is you three that bring out the brilliance of my projects.

To my Street Team, my readers, and my fellow authors who bring me back to the computer every day to do what I love because they share their support with me…Thank you!

This book, like so many of my books, took me on a journey I didn’t see coming.

Bethany Waterbury sure had a lot of skeletons in her closet. She was a challenge of the greatest kind as she fought back from a true, everyday demon which so many people fight.

Kent Black was the opposite. He was more fun, because he’s an author. It’s fun to look inside yourself and pull out those parts that are as important to the character as they are to the person who creates them.

I hope you enjoy this second installment of the Walker Family. They are so very different, each and every Walker. I look forward to what they will tell me each time I sit down at my computer.

Other books by Bernadette Marie

A Romance for Christmas (A Keller Novella)

Cart Before the Horse

Hands in front of her chest, palms pressed together, Bethany inhaled as she pressed her foot to her inner thigh. Her body wobbled on one leg as she closed her eyes in an attempt to achieve her balance.

The Georgia sun glittered through the trees and the spring air filled her lungs on the patio outside of her bedroom.

She held the pose for five full breaths, letting the peace of the morning wash over her.

Letting her foot slide to the floor, she lifted her hands over her head, sucked in a deep cleansing breath and folded in half. Her spine gave a few pops as it lengthened.

The problem with this pose was she could see her toes were in desperate need of a pedicure. The next exhale was a sigh.

Bethany Waterbury stood, reached for her lemon infused water, and her towel. She wiped the sweat from her brow and sipped her water. In six hours, she had an audition for a commercial. This would be her first audition in nearly a year. Deep inside she didn’t know what was worse, having done the horror movies she’d made in L.A. or wanting a grocery store commercial so bad she could taste it.

There was a tapping on her bedroom door.

“Come in,” she shouted as the door opened and her roommate Susan walked in, a cup of coffee in her hand.

“It’s beautiful out here today,” she said as she joined her on the porch.

“It is. Still can’t believe you gave me this room and didn’t take it for yourself,” Bethany admitted to her roommate who had given her the biggest room with the jetted tub and the patio.

Susan shrugged and sipped her coffee. “As soon as the house is built I’ll have my own porch off my master suite,” she said with a smile.

Bethany knew the day was coming. Susan would be moving in with her fiancé, who happened to be Bethany’s cousin Eric.

Two months ago a psychopath, who had once had an affair with Bethany’s mother, had shot Eric and burned his house to the ground before kidnapping Bethany. Weeks earlier he’d killed off Eric’s animals and caused destruction to Eric’s property and his grandfather’s. It seemed as though Douglas had been obsessed with Eric’s cousin Lydia as well.

She sipped her water again. Guilt still plagued her when she thought about it. Had she just stayed in California, where the magic of Hollywood had long given up on her, none of this would have happened to Eric.

It was her fault. She was the spitting image of her late mother. Just having seen her had set the man into some psychotic episode.

He’d been locked up and she’d been in counseling. When she’d come to Georgia, this wasn’t what she thought she’d be doing. The point in moving was to bond with her father, not seek counseling because of it.

He was a mess of a man, just as her mother had been a mess of a woman. Perhaps that was the common factor that had them together for the short time in which she was conceived.

Her father had a gambling problem, which had led him to using the family land as collateral to pay off his debt. His lack of discipline, of any kind, had nearly cost the family more than he already had.

There wasn’t a lot of pride in saying she was Byron Walker’s daughter.

“You look like you have a lot on your mind,” Susan said as she walked out onto the patio. Her new diamond ring sparkled in the sunlight.

“I was just thinking about everything. My counselor says I can’t blame myself for Eric’s loss, but it’s hard not to.”

Susan moved closer to her. “This is really bothering you.”

“How can it not? I’m lucky that when Douglas shot Eric it didn’t kill him. Or that he didn’t die in the fire.”

Susan knelt down in front of her and rested her hand on Bethany’s knee. “Eric is fine. The house is framed. The stalls are full of horses and you are safe. Honey, you have to be able to move on.”

She nodded. This wasn’t anything that she hadn’t been told already.

Susan stood and held out her hand to Bethany to stand. “What are your plans today?”

“I have an audition.”

“And you’re going with me to Pearl’s bridal shop this afternoon, right?”

Bethany had forgotten she’d promised to go wedding dress shopping with Susan. At least her sister owned the store. It was another step in getting to know her family—spending time bridal shopping would do that.

“I’ll be there. Pearl is expecting us.”

Susan sipped her coffee. “You’re still able to work tomorrow, right? Lydia has us set to cater the book club dinner. They have Kent Black coming.”

“The writer.” She held out her hand to gesture. “Haven’t you read him? Oh, he’s genius.”

Bethany narrowed her gaze on her. “He writes science-fiction doesn’t he?” she asked and Susan nodded. “Why would I read that? Why do you?”

Susan laughed. “I’m thinking you must be the only person who hasn’t read it. It’s been a New York Times bestseller for months. They’re looking to make a movie of it. Hey, maybe you can put in a good word to him and he can suggest they cast you as Dessilla.”

“Dessilla? Sounds like a role I was designed for.” She blew a hair from her forehead. “I’m done with horror movies.”

“No, she’s a beautiful alien.”

Bethany groaned. “I don’t think I want to be an alien either. I’d better get ready. And yes, I’ll be available for the book club.”

“How did she get him to come to the book club anyway?”

“I think she’s more connected than we think,” Susan winked. “I’ll talk to you later. Good luck on your audition.”

“Right. Are you supposed to break a leg for TV too?”

“It’ll do,” she joked as Susan walked back out of the bedroom.

Coffee houses once were a source of inspiration. They had a vibe and a feel to them. Now, Kent thought, they were more like bars.

The same people walked in and out of the door every day. They ordered the same addictive concoction and either carried it out or sat for hours and chatted with others.

He missed the days where he could pull up to a table and no one bothered him for hours. Since he was traveling, it was one of his only options. Sure, he could hole up in his hotel room, but that wasn’t very inspirational either.

Even though he’d rather be alone, he needed to surround himself with people for inspiration—he just wished they weren’t so noisy.

The door opened again. It had become a habit to look up and study the person. This one had him sitting up, removing his fingers from the keyboard of his laptop, and following her with his eyes.

Long red curls bounced over her shoulders, which were bare in a sundress with yellow flowers. She was lean and toned and absolutely radiant.

She walked to the end of the line and Kent turned in his chair to follow her with his gaze.

She smiled at the boy behind the counter. Kent noted that the young man flushed at her simple gesture. That said something.

She continued on to pay for her drink. He heard the woman ringing up her order offer a pastry, to which the redhead waved off with her hand and a laugh. Obviously she’d avoid that, he knew just by looking at her. Her drink was probably low-fat blah too.