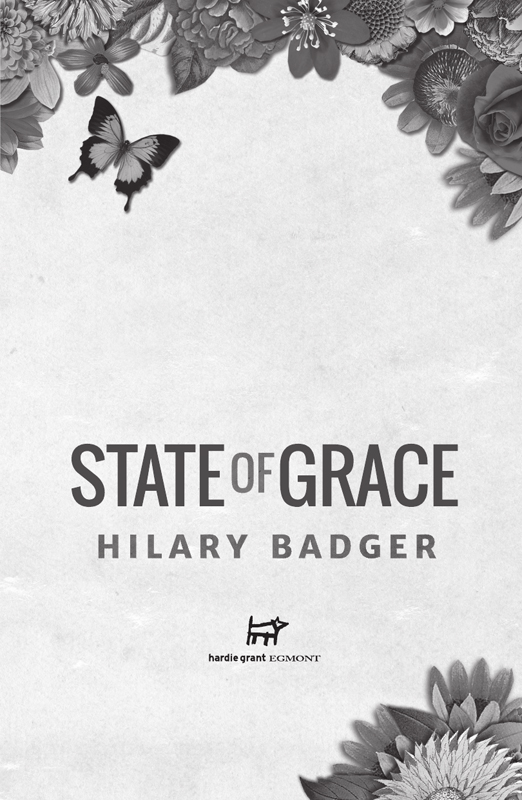 THE BOOKS OF DOT

The Book of Creation

The Book of Fun

The Book of Kindness

The Book of Love

The Book of Acceptance

The Book of Equality

The Book of Beauty

The Book of the Everyday

The Book of Contribution

The Book of Communication

The Book of the Chosen

The Book of the Beyond

Me and Fern are running across the lawn and everywhere around us there’s this haze that makes all creation shimmer. Literally nothing is still. The gazebo, the fountains, the lawn, every single flower, tree and animal – all of them are rippling and wobbling and floating.

There’s the smell of hot grass and frangipani flowers and ripe newfruit in the grove. And way, way off in the distance I can hear the waterfall gushing over the top of the escarpment into the lagoon below.

I grab Fern’s hand and tow her along beside me.

Dot created Fern short with big deer eyes and a face all round and sweet, exactly like a flower. She’s a dawdler, not a runner. A wanderer and a daisy-chain maker, the type of girl who’s always humming some dottrack or other. And smiling. Fern’s always smiling.

As we run, my sungarb catches the wind and mushrooms out around me, sending a breeze gusting up between my legs. The grass under my feet is a bright saturated green, stretching on and on in every direction. The lawn’s so huge, I could go on running forever.

From here, right in the middle of everything, I can’t even see the fringe of trees that marks the edge of all creation.

But endless as Dot’s creation seems, me and Fern eventually get to the lagoon. It’s so packed, it looks like all one hundred of us are here at the same time. Splashing, shrieking, bombing or just lazing the way the big cats do, kind of sprawled out on the flat, warm rocks.

‘Made it,’ Fern sighs, dipping her brown toes in the water. ‘Thank Dot.’

She peels off her sungarb, which today is coral pink with a low v-neck and a fringe of periwinkle shells swishing all around the hem. Fern lets her sungarb flutter to the rocks. The skin on her belly is the exact same shade as on her arms and legs. The girl is tanned from her toes to the tip of her tatas.

Did I mention Fern has really nice tatas? Oh my Dot, she totally does. The whole of Fern is kind of round – her face and her eyes – but the roundest part is those tatas, for sure. They’re like a pair of honeydew melons or ruby grapefruit, all
ripe
and everything.

No, I’m not planning to hook up with Fern or anything. Fern does hook up with girls.
Only
girls. But that doesn’t mean the two of us are ever going to. It’s so not like that between us. Never has been.

Right from the moment Dot created us, Fern and I have been the absolute bestest of best friends. Like, huts next door to each other, swapping sungarb, staying up all night,
inseparable
.We know
everything
about each other. I know which girls Fern likes to hook up with the best. That would be Luna number one and Sage number two.

And she knows which guys I like. (Right now, I’d probably say Jasper and maybe Drake if I’m in the right mood.)

That’s when she disappears under the water, leaving this fan of blonde hair on the surface. When she bobs up again, Fern’s gasping and spluttering but also smiling.

Luna’s clinging onto Fern’s back, arms sort of slung around her neck. She looks like one of those little monkeys riding around on a bigger monkey’s back. Luna’s teeny-tiny, with glossy black hair and just a sliver of brown around the black circles in the centre of her eyes.

Luna goes, ‘Sorry, Ferny,’ in a way that you know she doesn’t really mean it.

Actually, it’s pretty obvious Luna thinks the whole thing’s superfunny. There’s this loud, smacky
mwah!
sound as Luna kisses Fern’s neck then jumps off her back and into the water again.

‘I was swimming right past your legs. What could I do? They’re irresistible.’

You can so tell Fern and Luna are going to hook up on completion night. That’s if they don’t do it before.

But I’m too late and anyway, Fern’s too slow. Luna dives under the water and drags Fern down again. That gets the people beside them doing the same thing until there’s just this bunch of legs and arms, tatas and chubs flying all over the place. Just another standard late afternoon in the lagoon.

I’m halfway through taking off my sungarb (parrot-wing green, mid-thigh length, with billowy sleeves to keep the sun off my dotmarks) when I hear this voice beside me.

Without even looking, I know it’s Blaze. Dot’s given Blaze a voice that’s totally unlike anyone else’s. It’s all slow and deep and kind of drawn out, and that’s when you even get to hear it. Blaze isn’t the type of guy who likes to say a whole lot.

I whip my sungarb over my head. The entire time, Blaze looks down at his feet like they’re the most fascinating things Dot’s ever created. It’s like he’s not sure where to look now I have my sungarb off, which is sort of prenormal. I mean, bodies are Dot’s creation and that makes them beautiful to look at, the same as a flower.

I smile then, even though I haven’t said anything particularly funny. Seriously, it doesn’t take much to make me smile. That’s how I am. Laughing, joking, having fun – it’s how Dot created me. It’s how she created
all
of us.

Except, of course, Blaze.

Let’s just say Blaze is not the most light-hearted of Dot’s creations. And if I had to explain what he
was
like, you know what? I probably couldn’t. Blaze doesn’t give a whole lot away.

That’d be intriguing if you happened to like that sort of thing. You know, quiet, mysterious and oh-so deep.

‘What about you?’ I put my finger to my forehead like I’m thinking hard. ‘Oh, wait. I forgot. You never go in.’

I just shake my head at him. No matter what he says, Blaze totally never swims or does anything the rest of us do, not really.

‘Swimming’s fun. Jumping off the rocks is fun. And fun’s possibly the most important of the –’

‘Books of Dot,’ Blaze finishes for me, his mouth turning down and twisting sideways.

‘You’ve heard of them?’ I say. Another joke, obviously. ‘So I guess you are coming swimming then?’

I reach out, snatch the hem of Blaze’s purple sungarb and start to lift it. But really quick, Blaze knocks my hands out of the way and tugs his sungarb down again.

I make this huge deal of shrugging and folding my arms across my chest, where Dot’s given me flat little tatas and a whole stack of gingery freckles besides my dotmarks.

‘Sure, later. Uh-huh. Whatever you want.’

Blaze lets go of his sungarb.

Dot didn’t create us to hang around by the edge of the lagoon getting hot. She created us to have fun, so it’s probably my duty to get Blaze into the water with me, right? Who knows? Maybe that’s what Dot’s looking for when she makes her choices on completion night. It kind of doesn’t even need saying how indescribably awesome it’d be if I was one of the ones she chose.

So I make another grab for Blaze’s sungarb.

All gruff and everything he goes, ‘I said no!’

The way he’s looking at me, it’s hard to describe. Searching or scanning, if that makes any sense. So focused, I can’t help but squirm.

‘Fine. But you do realise you’re meant to be having fun?’ And then I sing-song, ‘And if you don’t, Dot’s not going to liiii-ke it!’

Blaze mutters something about fun being different for different people.

I think about that.

I do. I mean, Dot creates us all unique and it says in the Book of Equality (Chapter 1,Verse 1, to be specific) that every creation is equally wonderful, so Blaze could have a point. It’s just that, standing there, I don’t know how holding back the way Blaze does, watching everyone else swim, could ever possibly be fun.

‘Um, yeah. But I think
my
version’s the one Dot’s talking about in the Books.’

Blaze’s voice sounds deep but tight and sort of tired, saying that. He even starts doing that mouth thing again.

While he’s standing there, these two butterflies flutter out from behind a palm tree. There’s palm trees all around the lagoon, and mangos and avocados and some other type of tree that’s always blooming with these waxy flowers in the brightest purple known to Dot. Anyway, the butterflies do this lazy loop around the top of Blaze’s head before one of them finally lands right on top of his long, twisty-tangly ropes of hair.

He looks so funny, standing there all prehappy with a pink butterfly on his head, I start laughing. I can’t help it.

I shake my head and just keep on laughing. Blaze is trying his hardest to be all stern, I can tell. But even he can’t stay serious when the person next to him is losing it. He can’t quite stop a little smile spreading across his face.

‘What’s so funny?’ he repeats, softer this time.

And he’s looking right at me again, eyes stuck on my face like something pregood might happen if his gaze wandered anywhere else (say my tatas, for example).

I bend at the knees and launch myself into the lagoon. I’m so hot and clammy that hitting the cold water feels like hooking up with someone for the very first time. As in, all tingly and fresh and surprising and stuff.

It’s the feeling that makes you want to go straight to the gazebo and beg Dot to please, pretty please, make this last until the end of creation.

M
E AND
J
ASPER
and Fern and Luna are swimming, the four of us just a bunch of bobbing heads on the surface of the lagoon. Underneath, Jasper keeps on trying to hook his foot around the back of my right ankle and drag me under. Except, every time I feel even the top of his big toe anywhere near me, I pull away and start splashing him.

Jasper says, ‘You know you want to. You know it’s going to happen. It’s just a matter of time till I get you.’

I blink at him like I don’t quite understand.

When Jasper smiles, his teeth look all shiny white against his brown skin. ‘Maybe I do … and maybe I don’t.’

Since we were created, me and Jasper have hooked up a whole heap of times. He’s the kind of guy I like the absolute most. I mean, I love everyone equally, like it says to in the Books. It’s just, when it comes to hooking up, I obviously have my preferences. Jasper’s definitely one of them, his skin all honey-dipped and his hair long and gold and dotly.