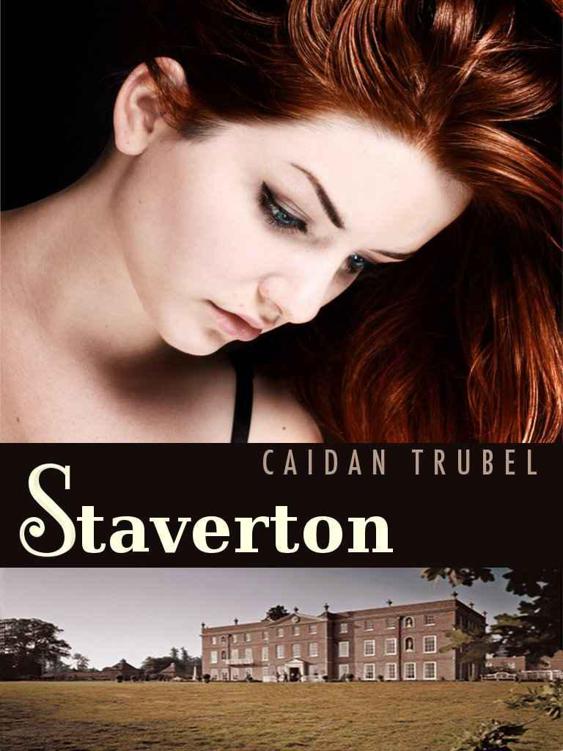 This book is a work of fiction. Names, characters, places, and incidents are either products of the author's imagination or used fictitiously. Any resemblance to real persons, living or dead, is entirely coincidental.

No part of this publication can be reproduced or transmitted in any form or by any means, electronic or mechanical, without permission in writing from the author.

I slouched in my chair and looked at the clock on the wall as Mrs. Reynolds, the math teacher, scrawled an equation on the blackboard. Only two minutes had passed since I last checked the time. I stifled a yawn and looked out of the large classroom windows to the playing fields.

The weather was scorching today. Outside, Jason, the school gardener, drove the sit-down lawnmower, and the smell of freshly-cut grass wafted in through the open window. The distant hum of the machine only added to my sleepiness.

I watched Jason manoeuvre the machine closer to the window. Most of the girls at the school had a crush on him, which probably had something to do with the fact St. Catherine’s was filled with two-hundred teenage girls, and Jason was the only man under fifty at the school.

The lawnmower juddered and made a spluttering sound. Jason cut the engine a few feet away from the window and climbed down off the mower, pushing his hair back out of his eyes. Then he peeled off his shirt, revealing his tanned torso.

The teachers would not approve. As soon as they noticed, they would be rushing out there, telling him to cover up. It wouldn’t do to have a half-naked young man strutting his stuff in a school full of hormonal young girls.

Jason removed the metal plate covering the engine and bent over the machine, then he looked up and caught me staring at him.

Whack! The teacher slammed the chalk rubber against her desk, sending out a puff of chalk dust. Every girl in the class jumped.

I straightened in my chair and blinked as Mrs. Smith stared at me.

“Lucy Carter, your attention, please. Do you think I am reviewing quadratic equations for the good of my health?”

I tried my best to look innocent, but Mrs. Smith wasn’t easy to fool. She looked out of the window, searching for the source of my distraction. Her lips pursed into a thin, tight line when she saw Jason looking into the classroom.

A dozen heads swivelled to take in the view, and I flushed scarlet. I kept my head down, staring at my textbook as if it was the most interesting thing in the world, in spite of the titters of amusement around me.

Mrs. Smith strode up to my desk and leaned close to me. I winced.

She reached up and yanked the blind closed. “Perhaps now, I will have your attention?”

I assumed that was a rhetorical question and didn’t reply.

Mrs. Smith resumed the lesson in her monotonous tone, and I sank down further into my chair, relieved. I had gotten off lightly. At any other time in the year, I would have been given detention at the very least. Luckily for me, Mrs. Smith didn’t want to waste her last few days of the summer term supervising me in detention.

I watched the seconds tick by on the clock and willed them to go faster. There was one more week of tedium to get through, and then we had six-weeks of summer holiday to look forward to.

It wasn’t fair of Mrs. Smith to expect us to concentrate on lessons. We finished our yearly exams last week. The other teachers set up DVDs in their classes.

I rubbed my eyes. Twenty minutes left, and I couldn’t even sit and moon over Jason, now the blind was closed. Not that he would be interested in me. There was a limit to how attractive someone could look in a school uniform that was a cross between a nun’s habit and a burqa.

I turned to my left and saw Caroline Harrington, sitting at the next desk, waving a scrap of paper at me. I glanced to the front of the classroom, and when Mrs. Smith turned her back to write something on the blackboard, I reached over and took the note from Caroline.

I unfolded the note, laid it flat on my desk and read Caroline’s messy handwriting.

Caught you looking! Don’t blame you!

I grinned and then pulled a face at Caroline. I picked up my pen to write a reply. I only managed to write one word before the classroom door opened, and Mrs. Hawksley, the school headmistress, entered the room.

Mrs. Hawksley’s hair, too dark to be her natural colour, was pulled back in a severe bun, revealing piercing blue eyes. Her sharp eyes surveyed the room before her gaze settled on me.

“I’m sorry to disturb your lesson, Mrs. Smith,” she said. “But I need to speak to Lucy Carter.”

I screwed the note up in my fist in a desperate attempt to hide it. Had old hawk eyes seen it?

I got to my feet and glanced over at Caroline. Her face was pale and pinched. She was probably worried I would tell Hawksley the note was from her. I stood up, pushing back my chair, which scraped along the floor.

Mrs. Hawksley winced at the noise and then waved a hand at my exercise book and math text book on the desk. “Bring your belongings too.”

I picked up my rucksack, shoved my books into it and put the screwed-up note into a side pocket. I could feel the eyes of the rest of the class on me. Flushed and embarrassed, I fumbled with my pens, knocking one of them to the floor. The lid of my old-fashion wooden desk fell shut catching my fingers.

I rarely got into trouble at school. I wasn’t a high flier, more a middle-of-the-road student, doing just enough work to keep me out of trouble, but not enough to get A-grades.

When I finally had everything packed away, I walked towards Mrs. Hawksley and the door. On my way, I shot Caroline another quick look, to reassure her I wouldn’t get her into trouble, and followed Mrs. Hawksley out of the classroom.

Mrs. Hawksley strode along the corridor, and I hoisted my rucksack on my shoulder and struggled to keep up. My mind raced through excuses I could give the headmistress for passing a note in class. My parents would go mad if they heard about this. Six months ago, I had been reprimanded for talking to Caroline in class, and my parents stopped my allowance for a whole month.

Our footsteps echoed along the elegant walkway. St. Catherine’s was over two-hundred years old. The walls were wood-panelled, and still held their rich colour, with only a few scuff marks. The floor showed signs of wear, but it was highly polished and gleamed, despite hundreds of girls stomping on it year after year.

As we approached the entrance to the dining hall, I had an idea. I kept my eyes fixed on Mrs. Hawksley’s back and willed her not to turn around. Then I inched open the side-pocket zip on my rucksack, and my fingers closed around the note. As we passed the dining hall, I stepped inside and flung the note into the bin, which stood next to the doorway, then I walked quickly to catch up with the headmistress. I felt a little better after I had thrown the evidence away. Hawksley wouldn’t be able to prove a thing.

We turned a corner and ahead of us, I could see the Headmistress’ office. I kept my head down and thought about how many other girls must have made this same journey over the years to be told off by the Headmistress.

Mrs. Hawksley slowed as we approached her office and turned to face me. She nodded and opened the door to her office gesturing for me to enter.

To my surprise, the office wasn’t empty. A tall, angular woman sat in one of the visitor’s chairs in front of the desk.

I stopped, and Mrs. Hawksley put a hand on the small of my back and directed me to the other visitor’s chair.

It didn’t feel right. The woman didn’t fit in at all. Her cheap shoes sunk into the thick carpet, and her shiny, green polyester suit contrasted sharply with the expensive, antique upholstered chair.

The last time I’d come to Mrs. Hawksley’s office, to be reprimanded, no one else had been there. My throat suddenly felt dry.

The stranger perched on the edge of her seat and looked anxiously at me. Her nose was long and beak-like. She looked like a huge, nervous bird.

In contrast, Hawksley was at home in these surroundings, almost like part of the furniture. She was the perfect example of what you would expect a school teacher to look like. She wore a tweed jacket, a mid-calf length skirt and thick tights, despite the warm weather.

It was hot and stuffy, and the office smelled of polish and coffee. I wished Hawksley would hurry up and get on with it, so I could get out and get some fresh air.

The stranger leaned forward to put her cup of coffee on Hawksley’s desk. The cup rattled in the saucer, and the woman steadied it with her other hand.

Mrs. Hawksley settled into her hard-backed chair and put on her reading glasses. Her face lost some of its harshness, and she even gave a small smile. “Lucy, this is Miss Richards. She is here to help you.”

“I’m afraid we have some terrible news, my dear. On Saturday, your parents were killed in a road traffic collision.”

I gripped the arms of my chair. “Killed?”

Miss Richards reached over and patted my arm with a bony hand. I wanted to snatch my arm away.

“Apparently, they had trouble tracking you down, though goodness knows why,” Hawksley said, looking pointedly at Miss Richards.

Miss Richards cleared her throat, then said, “It took us a few days to find out where you were, Lucy.”

But I hadn’t meant that at all. I wanted to know why I hadn’t felt something. How could I have been carrying on as normal, doing something as mundane as mooning over the gardener and not known my parents were dead? Why hadn’t I sensed something?

I was aware of Miss Richards’ lips moving, but I wasn’t actually listening. My parents had been dead for days, and I had been carrying on as if nothing had happened.

I felt dizzy and leaned forward, resting my head in my hands and staring at the carpet. The wool pattern swam before my eyes. I took a couple of deep breaths, but the smell of coffee mixed with the smell of furniture polish made me feel sick.

I could hear the clock ticking and the sound of the younger girls playing hockey outside. I turned to the window, squinting at the bright sunlight. The girls wore short, pleated skirts and waved their hockey sticks around like weapons. A huge cheer rang out as one girl raced up the field toward the goal. Life was going on as if nothing had happened.

Miss Richards was still talking, but I tuned her out. I felt a hollow sensation spreading out from my stomach. Guilt. I hadn’t even seen my parents during the Easter holidays. I had taken up the Harrington’s offer and gone skiing with Caroline and her parents instead.