Steps For A Taboo Roadtrip 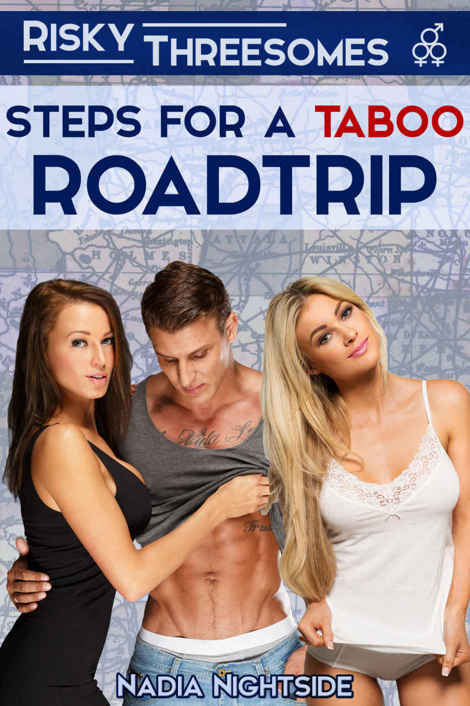 Risky Threesomes: Steps For A Taboo Roadtrip (No Limits Erotica, #3)

Your opinion influences other readers and matters quite a bit to me! If you enjoyed this sexy story, please leave a review on Amazon and let others know what you thought. I want to write what you love!

Subscribe to the Nadia Nightside New Release Newsletter
for a private link to THREE completely free stories available ONLY for subscribers! Not only that, but you'll also receive exclusive access to regular special offers and discounts!

Victor, just a regular guy, finds himself blessed with the ability to put any woman alive under a hypnotic trance whenever they taste his seed. If he's not careful, this absolute power will corrupt him absolutely...

A sexy, curvy sexual servant is the object of royal affection; the only problem is that it's coming from TWO studly, alpha princes who won't take “no” for an answer!

H
er Mind, His Control – Knocking Up The Bride

B
imbo Casino – No Restrictions

Overworked couple Jonathan and Rosie arrive at the Shining Spiral Casino for what is supposed to be a free vacation, but they slowly transform into brainless lactating bimbos and hulking studs, ready to screw all day with their overly-fertile bodies!

N
ora was nearly packed. She walked downstairs to the entry, bending down to sort through the massive pile of shoes next to the back door. In Alder City, they would need some good walking shoes. It was difficult to sort through her stepbrother Charlie’s various boots, sandals, work shoes, dress shoes...how did a guy have more shoes than her?

Only he didn’t, not really. He just kept them all in a pile down here next to the door, so they seemed like more. Her own shoes were kept in her closet, neatly arranged on a stand. Except for her walking shoes, apparently.

Their house was a tall three-story, located far on the outskirts of town. Her stepfather, Archibald, didn't trust city living or city livers. As a result, his family—his stepdaughter Nora, his son Charlie, and his new young wife Annette—lived far from anything truly interesting. All the restaurants and stores were chains, and all the concerts were smooth jazz or holiday symphonies.

In the kitchen, she heard her stepbrother Charlie and their stepmother Annette preparing food. The swinging door to the living room, and then to the kitchen, were arranged just so, and Nora could see clearly as Annette strutted toward Charlie from behind. She wore a tight white tee shirt, her glamorously sexy body on display in tiny blue shorts.

“Do you think these shorts are too short, Charlie?”

Charlie turned to look. He was a tall young man, muscular and handsome. Annette clearly was tugging her shorts up at him. She did a short turn and showed off her behind—tight and bubbly—and then even bent forward a bit on the counter.

“They show quite a lot,” said Charlie.

Nora herself was slender, short. Her bust always felt too big on her short frame—with big 36D breasts that felt like they were going to topple her over in a strong wind. But boys seemed to like them; or at least, they did whenever she bothered to show them off, which wasn’t often. She didn’t like the attention of other men, really. Their attention always invited comparisons.

Not comparisons of her to other girls. That wasn’t so bad. Men were always doing that. Nora ranked well enough, with her lovely blue eyes and thick, dark hair. But no, Nora’s problem was that the men who looked at her never were quite the type of Real Man she wanted to look at her. And the only Real Man she knew was absolutely, completely off-limits to her.

The only Real Man she knew was her brother Charlie.

From her position in the entry, Nora could see Charlie’s eyes eating up Annette’s form. Flashes of jealousy sparked in her chest, powering through the darkness of her mood. She tried to put them down, extinguish them somehow. What did she care who Charlie looked at?

Even if it was their stepmother.

Their beautiful, ex-glamour model stepmother who had only married Charlie’s father for his money. And in an obvious way, too—but Charlie’s dad didn’t seem to mind. He had plenty of money to pass around. Not that Nora ever got much of it. Nora’s mother, Jean, had died when Nora was quite young and Charlie’s father, Archibald, always seemed to take his frustration and grief out on Nora. She, Nora’s mother, had died right after marrying Archibald, in point of fact. Nora had leaned on Charlie for all those years afterward, needing someone to hear her, to help her soldier forward.

Charlie never complained. Not once.

“Could I ask you to do something for me?” Annette went on. “It’s a little weird.”

“Could you...would you mind
feeling
how short they are? I just...I keep feeling like there’s something caught up right underneath the edge. Like some grime or dirt or something, but I
know
they’re clean. Could you feel for me?”

Charlie laughed. His broad, eighteen year-old frame was lean and ruggedly hard from years of playing lacrosse. “Are you serious?”

Annette nodded. Her hands were on his chest now, stroking up and down. Breasts, thick and round, were barely contained inside of her tiny half-buttoned sweater.

The excuse was flimsy as anything. Surely, Charlie could see that. Surely he would see that Annette just wanted to take advantage of him like she had done to his father...wouldn’t he?

Think without your dick for once, Charlie!

Of course, when it came to Nora, Charlie had never thought with his dick. And how did she feel about that?

But Annette had already pressed her bum back against Charlie’s thighs, bending over slightly. The barely-covered crack of her denim-clad ass rubbed intently over Charlie’s crotch. Charlie, for his part, looked rather amazed at the entire situation. Annette was a one-of-a-kind beauty, and even if she was his stepmother, she was still drop-dead gorgeous. It was hard just to ignore that type of beauty practically begging you to touch it. It was especially impossible if you were an eighteen year-old male with no real attachments to any kind of girl in the world. At school, before they graduated last spring, Charlie had been notoriously single, despite every girl he came across basically drooling all over him.

“Annette, seriously. This is...I mean, this is a little weird.”

His hands floated over her perfectly tanned skin. Her golden hair was thick, like a soft blanket, and slowly his fingers sank down into the silken locks. Annette moaned just slightly in response.

“Why is it weird? I just want your help.”

Another woman, confronted with her own lack of subtlety, might have fled from the scene. But Annette doubled down. She pushed her ass completely back into Charlie and then rose up from the hips, sliding her slender waist and back into his broad, muscled torso.

She giggled slowly. “You found me out. Such a
smart
man.”

Grabbing one of his hands and sliding it up her bare midriff, she began to tilt and turn into his hard body.

He preened slightly. Nora had trouble not rolling her eyes. He
preened
.

Annette’s hands slid Charlie’s grip upward, onto the soft balloon of her tits. They were real. Annette bragged about how they were so big, so buoyant and perfect, and yet still real. She did this at the dinner table, admonishing Nora for not showing off her own healthy bust.

“I want us to really get along on this trip, Charlie. I think that would be
so
great. I want you and to understand each other. You know? We’re family now.”

Nora couldn’t help herself. She had to stop this. It was...it was all so wrong. The way that Charlie’s head rolled back as Annette stroked him so urgently through his shorts. Annette’s tight, hot ass bouncing slightly with every little stroke as her weight shifted from one long leg to the other.

On her own body, Nora’s hands drifted against her crotch. Heat, palpable and wet, grew outward from there. It was so hard to ignore. Why was her body
doing
that? Watching...watching her mother and her brother, doing that terrible act...

Her fingers were so close to her pussy. They were
on
her pussy, in point of fact, with just that stupid denim in the way. And it was nothing, a nothing movement, nothing at all, to let her fingers slide across the brass button of her shorts and let them pop down.

But the best part of her—or at least she hoped it was the best part—kicked her bag down on the ground across the lobby. It made a big crash, sliding over and into the other gathered bags and shoes in the hall.

“Oh, crap!” she said, trying to make herself loud.

From the kitchen, she heard a sudden scuttling. The doors banged and Charlie was there, face flushed. He leaned against the doorway. In other circumstances, his pose would have been positively normal. But now, Nora knew that he was simply hiding his boner.

“Oh.” Charlie gulped slightly and nodded, looking back over his shoulder at Annette. The brilliant young blonde smiled devilishly.

“Are you guys ready to go?” Nora asked. “I’m ready. Whenever you are.”

I
n less than an hour, they were all packed, and just waiting for Annette to finish up a quick video chat with Archibald, Nora’s stepfather. The newlyweds were, as far as appearances went, crazy about one another. It wouldn't last—so far it had been just about four months, and Annette was ringing up bill after bill as she bought bigger and better wardrobes full of clothing, cars, helicopter rides to her favorite restaurants, and even a yacht. But they were happy, now. Annette got to have whatever she wanted, and Archibald got to make the beautiful young woman smile.

Charlie and Nora were in the large living room. Charlie sat languidly in one leather couch, while Nora sat at the edge of her seat, one foot bouncing restlessly. In her hands, she fingered the small silver locket that her mother had left for her. It was a simple thing with the shape of a shell on one side. Nothing special by itself, other than that Jean had left it for her.

“Something is wrong,” said Charlie. “What’s up?”

Nora sighed. She couldn’t hide anything from him.

“Something. Come on.” He sniffed. “Yeah. I can smell it. You’re worried about something.”