Read Touch Me and Tango Online

Touch Me and Tango 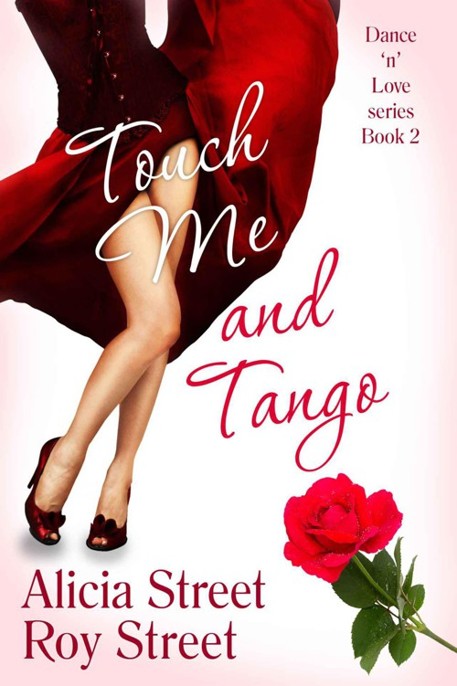 Touch Me And Tango

All rights reserved. No part of this publication can be
reproduced or transmitted in any form or by any means, electronic or
mechanical, including photocopying, recording, or by any information storage
and retrieval system, without permission in writing from Alicia Street and Roy
Street, with the exception of brief quotations embodied in reviews.

This is a work of fiction. Names, characters, places,
brands, media, and incidents are either the product of the author’s imagination
or used fictitiously. Any resemblance to actual events, locales, or persons,
living or dead, is entirely coincidental.

Driving samba music blared from the speakers. Tanya immersed
herself in a familiar routine of turns and whisks, her hips swiveling, legs and
feet moving at breakneck speed to the percussive rhythm.

“You okay?” Andre asked when their heads bent close to each
other’s.

“Yes.” But how could she be? Mark’s marriage proposal at
breakfast today sent her mind reeling off course. And when the mind goes off,
the body tends to follow.

Andre spun toward her and reached his arm out to catch
Tanya’s back in a deep drop. She met him several beats behind their musical
cue.

He growled under his breath. “Get it together, please.”

Every second in a dance performance was like a lifetime.
There was no room for hesitation or error, especially in the screaming fast
samba they’d created to impress the crowd. Her moment of hesitation was enough
to ruin their timing for the complicated lift they’d rehearsed so many times
she’d run out of Advil.

Andre still managed to press Tanya over his head as her leg
opened in a high
développé
. She felt
herself off kilter. On the landing, her feet fumbled slightly when she touched
down, but she regained her balance and seemed solid.

Until she smelled the lilacs. Or thought she did.
Am I losing it
?
This is a ballroom in the center of London
.

She snapped out of her daze and tried to compensate. But in
her attempt to get back in sync, Tanya rushed a pattern of ball changes that
led to her next turn. Before she knew it, her foot slipped, and she went down
on her butt.

She quickly flung out a dramatic arm, trying to make the
fall look intentional. Andre gripped her hand and yanked her to standing,
barely masking his fury.

The music hit a crescendo. Tanya struck her final pose with Andre
and waited for the applause. Having toured Europe and Asia for the last eight
years performing in all sorts of venues and in front of all kinds of crowds,
she knew the difference between a fired up audience and one that was merely
being polite.

Two guesses which kind they got tonight.

After taking their bows, the pair bounded off hand-in-hand.

As soon as they hit the darkened corridor leading to the
dressing rooms, Andre glared at her in disbelief. He spit out his words through
a thick French accent. “I hope you have a good reason for what just happened.”

She heaved a remorseful sigh, grateful the show was only an
exhibition and not a competition. “Sorry about that.”

“People came from miles around to see us. You have a growing
reputation as an international star. Or at least you did.”

Her fingers nervously twisted the shiny fringe on her dress.
She couldn’t blame him for hating her right now. “I feel terrible. Something
came up today and I’m having trouble dealing with it.”

“Makes no difference. You’re a professional. And one of the
best. Otherwise I wouldn’t have agreed to do this tonight.”

“I apologize. There’s no excuse.”

“I have never seen you do anything like this. I don’t get
it.”

“Neither do I.” Her mouth crumpled. She turned and rushed to
her dressing room before anyone saw her tears.

Shutting the door, Tanya perched on a wire-back vanity stool
in front of the makeup mirror. No, she didn’t get it at all. She dug through
her purse and pulled out a small velvet box, opened it, and gazed at the
sizable diamond in the ring’s beautiful setting. Why couldn’t she make herself
put it on?

Her relationship with Mark was custom made. From the start
it had been fast and effortless. Her catching Mark’s eye on the dance floor in
a club near Piccadilly. Two Americans with a nasty case of the hots for each
other. Purely physical at first, their chronic lovemaking evolved into an
amiable affair that had lasted ¬over a year.

Of course Tanya credited that to the fact that they both
traveled so much, rarely spent a full week together, and allowed each other a
very long leash.

She glanced into the makeup mirror. Most women would kill
for her camera-ready face and body. And not many could wear a dress like this
one. Short, backless and shiny, with high slits in the skirt, a plunging
neckline to highlight her full breasts, and cutout sections along the torso to
reveal her tight waist. But who was she?

A superficial
showpiece with no substance
. The words still haunted her.

Words spoken long ago by a man she should’ve forgotten by
now.

Her cell rang. It was Mark. She wiped her eyes and cleared
her throat. “Hi.”

“Oh, come on. We both know the answer to that. Must I go
into it again?”

“We’re already living together. So, what’s the difference?
We can still manage an independent lifestyle. The way it is now. Except, we’ve
tied the knot.”

“Then why are you all of a sudden so keen on getting
married?”

“What if I gave you a million dollars as a wedding gift?”

She laughed. “I know you earn a lot, but you haven’t got
that much.”

“No, but my grandfather does. And since I just turned
thirty-five I was supposed to get a cool five million. But he won’t give me
anything unless I’m married.”

Tanya was not exactly the most romantically inclined woman,
but this was a bit much to take. “So that’s the only reason you proposed.”

“No. Of course not.” He lowered his voice to a sexy murmur,
“You know how much I like every part of you. And you know you’re going to say
yes.”

A flush of heat ran through her. Yeah, sex with Mark was
great. But the thought of marrying him nearly brought on a panic attack. “I, I
can’t answer you now.”

“I’m serious about the wedding gift. A million all your
own.”

“For what? We’re good together, babe. And at thirty you
ain’t getting any younger. Why the stalling? What more do you want?”

What
did
she want?
A dramatic fairytale love to overwhelm her? She didn’t believe in that. A
desperate part of her just wanted to run, to escape.

Her call waiting saved her. Not only from the awkward conversation.
But from a door she feared would close forever if she married Mark. The call
was an SOS from her mom who’d broken

her
leg and could use some help.

“I’ll arrange my schedule and get a flight to New York
tomorrow.” Tanya couldn’t stop herself from asking her mother about
him
, adding in the names of a few other
locals so she could pretend it was casual curiosity about people back home.

But after she signed off, a tiny voice inside reminded her of
that one taste she’d had of love.

It reminded her of the delicate thread she had never let go
of.

Flimsy as it may be, it was still there.

And it kept her heart hopelessly tied to Parker Richardson.

Parker Richardson couldn’t shake the odd feeling he woke up
with this morning. Like a storm was brewing. Not in the weather. He could
usually tell what to expect on that score just by looking at how the trees and
animals behaved. No, this was a people thing. He could feel it.

He’d checked up on a couple friends. His mother. His two
sisters. Nothing out of the ordinary. His mom needing a refill of her blood
pressure meds wasn’t anything new.

Telling himself it was probably that dumb TV show he’d
watched two nights ago, he eased his white 4X4 van into a parking space, shut
the van’s door painted with
Richardson
Landscape Gardening and Lawn Care,
and stepped onto the narrow sidewalk of
North Cove’s Main Street.

He loved the pokey ambience of this town. Turn of the
century-style street lamps and a handful of one-story shops with striped
awnings. A post office. A little white church with a steeple. Straight out of a
greeting card.

Rubbing his sore shoulder, stiff from a morning spent laying
flagstone for a client’s garden, he headed for the pharmacy. He’d barely
crossed the sidewalk when the storm appeared. Or rather a tempest of a woman.

The sight of her nearly took his breath away. What was she
doing here? Why had she come back?

Strange thing was she looked kind of ruffled. Like she’d
been walking in the wind. But even in baggy trousers and wrinkled blazer he
could see that perfect figure eight of her totally female form. Bright April
sunlight turned her honey-colored hair golden. And, oh God, that heart-shaped
face he used to cup in his hands.

Dipping his head, hoping she hadn’t seen him, Parker made a
beeline for his truck. He’d just lay low until she drove off.

“Parker? Is that really you?”

Too late. He turned. A tight half smile etched his mouth.
“Hey, Tanya.”

She walked up to him, a study in predatory grace. “Long
time. Must be, what, ten years?”

“Could be,” he said, making an effort to keep his expression
indifferent. But he knew how many years, months, even days had passed since
that night when she’d laughed at the idea of marrying someone like him.

“Same old. And you?” Was she married now? Kids? Her mother
told him she’d become a ballroom dance pro and did shows throughout Europe. But
he hadn’t been able to bring himself to ask what he really wanted to know. He checked
her hands. No rings.

“Right now I’m pretty fried,’ she said, running a hand
through her hair. “Just got in from London and fought my way through traffic
from JFK airport in that stupid rental car.” She gestured to a white Ford
sedan. He glanced at the car, relieved to see there was no man waiting in it.
“I’m here to play nursemaid and chauffeur to my mom. Did you hear that she
demolished her car?”

Parker nodded. He’d never been a man of many words, but his
shields were at max with Tanya there in front of him.

Better Nate Than Ever by Federle, Tim
Boogers from Beyond #3 by M. D. Payne
Grand Master by Buffa, D.W.
Running Blind by Shirlee McCoy
Cold, Lone and Still by Gladys Mitchell
B00DSGY9XW EBOK by Ryan, Ashley
Ellen Under The Stairs by John Stockmyer
Muller, Marcia, [McCone 01] Edwin of the Iron Shoes(v1, shtml)
To All the Rakes I've Loved Before (A Honeycote Novella) by Barton, Anne
Shallows of Night - 02 by Eric Van Lustbader