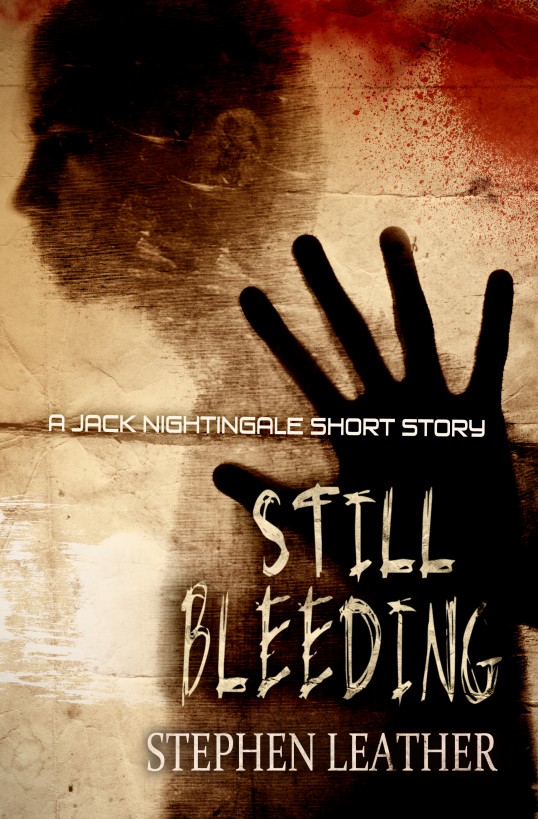 This is a work of fiction. Names, characters, places,
brands, media, and incidents are either the product of the author’s
imagination or are used fictitiously. The author acknowledges the
trademarked status and trademark owners of various products
referenced in this work of fiction, which have been used without
permission. The publication/use of these trademarks is not
authorized, associated with, or sponsored by the trademark
owners.

This ebook is licensed for your personal enjoyment
only. This ebook may not be re-sold or given away to other people.
If you would like to share this book with another person, please
purchase an additional copy for each person you share it with. If
you’re reading this book and did not purchase it, or it was not
purchased for your use only, then please return to Smashwords.com
and purchase your own copy.

Jack
Nightingale had never been a fan of Fridays. They always seemed to
get in the way of a perfectly good weekend. Friday was always a bad
day to start a case and finishing one on a Friday meant the bill
wouldn’t go out until the following week. All in all, he found it
hard to drum up any enthusiasm for Fridays. There were the odd
exceptions. Bank Holiday Fridays were always a pleasant surprise,
and every now and again New Years Eve and Christmas Day fell on a
Friday. This particular Friday was different, though. As soon as he
stepped into his office, his assistant Jenny McLean told him that
he had a client waiting for him.

‘There was
nothing in the diary,’ said Nightingale, hanging his raincoat by
the door.

‘I never put
anything in the diary because you never open it,’ said Jenny. ‘He’s
a priest from the Vatican.’ She was wearing a blue dress that
looked expensive and had tied her blonde hair back into a
ponytail.

‘Yes, where the
Pope lives.’

‘Well, strictly
speaking it’s a separate independent city-state, but yes, that’s
the one.’ She pointed at the door to the office. ‘He’s waiting for
you in there.’

‘What does a
priest want with a private eye?’

‘I don’t know.
Maybe you could ask him.’ She shrugged. ‘Just a thought.’

Nightingale
grinned and shook his head. ‘I meant would you bring me one in. And
one for the client.’

‘How are we off
for chocolate biscuits?’

She smiled
sweetly and turned back to her computer monitor. ‘Then we haven’t
got any,’ she said.

She went over
to their coffee maker as Nightingale headed into his office. A tall
dark-haired man with piercing blue eyes was sitting on the chair
opposite Nightingale’s desk. He was wearing a clerical collar and a
floor-length black cassock. He stood up and offered his hand.
‘Jonah Connolly,’ he said. His accent was difficult to place but it
certainly wasn’t Italian.

Nightingale
shook hands. ‘You’re from the Vatican, my assistant tells me.’

Connolly
smiled. ‘I am indeed.’ His hand disappeared inside his cassock and
reappeared holding a slim black leather wallet.

‘But you don’t
sound Italian.’

The priest gave
him a business card and slid the wallet back inside his cassock.
‘Not everyone who works at the Vatican is Italian, Mr
Nightingale.’

Nightingale
studied the card. The name on it read ‘Jonah Connolly’ and
underneath it was a Post Office Box number in Vatican City. And a
phone number. A mobile.

‘Do I sound
Irish?’ asked the priest.

‘No,’ said
Nightingale. There was a flatness about the man’s accent, not Irish
and not English but not American either, somewhere in between.
Nightingale walked around his desk and sat down.

‘
There
you go then,’ said Connolly as he sat and smoothed the cassock
around his legs.

Nightingale
tapped the card on the desk. ‘And what do you do for the Holy
See?’

The priest
smiled amiably. ‘I’m sort of a middle man.’

Connolly
gestured at the white collar around his neck. ‘I’m not wearing this
as a fashion statement,’ he said.

Nightingale
held up the card. ‘It doesn’t say priest on this.’

‘No, that’s
true. Would it help if I recited the Lord’s Prayer? Would that
convince you?’

Nightingale
smiled thinly. ‘How about you tell me what’s in Luke Chapter
Eleven, Verse Nine.’

The priest
raised one eyebrow. ‘Are you serious? You want to test me?’

‘Perhaps you should also consider Deuteronomy
Chapter Six Verse Sixteen. You shall not put the Lord your God to
the test, as you tested him at Massah.’

‘Yeah, well I’m not testing God, am I? I’m
testing his representative, which seems fair enough. Isn’t that
what John said?’

Connolly’s frown deepened, then he nodded
slowly. ‘Beloved, do not believe every spirit, but test the spirits
to see whether they are from God, for many false prophets have gone
out into the world.’ The priest smiled. ‘You know your Bible, Mr
Nightingale. Are you by any chance a Catholic?’

‘But clearly a believer?’

‘I read the Bible every now and again. Do I
need to be a believer to get the job?’ He put the card down on his
desk.

‘It wouldn’t make any difference either way,’
said Connolly. ‘I came to you because your website makes it clear
that you have some expertise in supernatural matters.’

‘I’ve had my moments,’ said Nightingale.
‘What is it you want doing?’

The priest bent down and Nightingale realized
there was a battered leather briefcase at his feet. Connolly picked
it up, opened it, and took out a newspaper. He passed it over to
Nightingale. ‘Page three,’ he said.

The paper was the Bromley Times, and the
story was headlined ‘MIRACLE GIRL HEALS CANCER SCHOOLBOY’.
Nightingale quickly read through the story. A twelve-year-old girl
had begun to bleed from her hands and feet and from a wound in her
side. Stigmata. The wounds corresponded to the wounds of Christ on
the cross. The girl’s name was Tracey Spradbery and according to
the newspaper the Virgin Mary had appeared to her in a vision.
Living next door to Tracey and her family was a ten-year-old boy
who had leukemia. According to the boy’s parents, the disease had
gone into remission the day after he had gone around to play with
Tracey and after a week doctors had pronounced him fully cured.

‘Interesting,’ said Nightingale. He looked at
the date of the cutting. It had been published a month earlier.
‘This is a big story, why haven’t I seen this in the nationals? Or
on TV?’

‘Because as soon as that appeared in the
local paper the family shut the doors. The girl hasn’t been seen
since and they don’t allow visitors. You’ll see in the article that
no one from the Spradbery family spoke to the journalist and
there’s no photograph of Tracey.’

‘So she hasn’t healed anyone else?’

‘There’s no evidence that she healed anyone,’
said Connolly. ‘The entire story is based on an interview with the
next door family.’

Jenny knocked on the door and brought in a
tray with two mugs of coffee. She put it on Nightingale’s desk.
‘There’s creamer and sugar on the tray,’ she said to the priest and
he thanked her.

Nightingale looked back at the newspaper.
There was one photograph of Ben Miller, the boy who had beaten
leukemia, standing with his parents ‘So how did they know the
little girl has stigmata?’

‘Good question,’ said the priest. ‘The little
boy saw the bandages on the girl’s hands. And he said she told him
about seeing the Virgin Mary. But we’ve made our own enquiries and
from what we have discovered, the wounds are genuine and she
is still bleeding from her
hands and feet and from a wound in the side. The stigmata
sites.’

‘And what’s
your interest? Why is the Vatican so concerned?’

‘Because it
could well be a miracle,’ said the priest. ‘And we investigate all
miracles. Especially those that involve the appearance of the
Virgin Mary.’ He stood up, took one of the coffee mugs, and sat
down again.

‘And for that
you hire a private detective?’

The priest
smiled. ‘Generally we do the research ourselves. But this case is
unusual in that the family are refusing to speak with us.’

‘Sounds as if
they don’t want any publicity,’ said Nightingale. ‘Who can blame
them?’

The priest held
up his hands. ‘Absolutely, it’s perfectly understandable. But we
would still like to know if this is a genuine miracle, or something
else. In a case like this it’s sometimes more advantageous if we
use outside help.’

The priest
chuckled. ‘It’s not as simple as that.’

Nightingale
pulled a pack of Marlboro from his pocket. ‘Do you mind if I
smoke?’

Nightingale
took a cigarette for himself and offered the pack to the priest.
The priest took one and Nightingale walked around the desk to light
it for him.

‘She has the
stigmata,’ Nightingale said as he dropped back down into his seat.
‘That’s a sign of Christ, right? The marks left from the nails when
Jesus was crucified and the wound in the side where he was stabbed
with a spear.’

‘Do you have
any idea how many cases of stigmata the Vatican investigates every
year, Mr Nightingale?’

‘Well over a
hundred. All around the world. And then we have sightings of the
Virgin Mary, angels appearing, vegetables that look like Christ,
the face of Jesus in damp patches on ceilings. Do you know how many
of them turn out to be miracles?’

‘I’m going to
guess that the answer is none.’

The priest
smiled tightly. ‘And your guess would be right. None. There are no
miracles, Mr Nightingale, at least not involving civilians. That is
now how the Lord God demonstrates his presence in the world. In
every case we have ever investigated, the stigmata has had another
explanation.’

‘So you think
she’s faking it?’

The priest
shook his head. ‘Not necessarily. It could be psychosomatic. The
brain is a very powerful organ and can affect the body in ways that
we barely understand. Or it could be the parents doing something to
her while she is asleep. Or forcing her to wound herself.’

‘Why would they
do that?’

‘In the past
we’ve had parents who want money, or fame, or just to be noticed.
But usually in these cases the parents are keen to get as much
publicity as possible. These parents won’t let journalists near the
little girl.’

The priest
shrugged. ‘Maybe they’re in for the long haul. They live in a
council house, maybe they could spin this into them getting a
better house. Or a book deal. A reality TV show. Who knows? There
are lots of ways of benefiting from a kid who can perform
miracles.’

‘You’d think
that if this was a genuine stigmata they’d want someone from the
church involved.’

‘The family’s
not religious,’ said the priest. ‘The father’s a confirmed atheist,
that’s what I’ve heard. The mum is a very lapsed Catholic, which
might be what’s behind this.’

‘Maybe the
mother has suppressed her belief to be with her husband. And the
stigmata is her way of getting it out in the open.’

Murder in Moscow by Jessica Fletcher
Burned Away by Kristen Simmons
All For One [Nuworld 3] by Lorie O'Claire
Dublin Noir by Bruen, Ken
Bones by John Wilson
Esperanza Rising by Pam Muñoz Ryan
When Paris Went Dark by Ronald C. Rosbottom
The Widow and the Orphan by J. Thomas-Like
Firespark by Julie Bertagna
Nolan by Kathi S. Barton