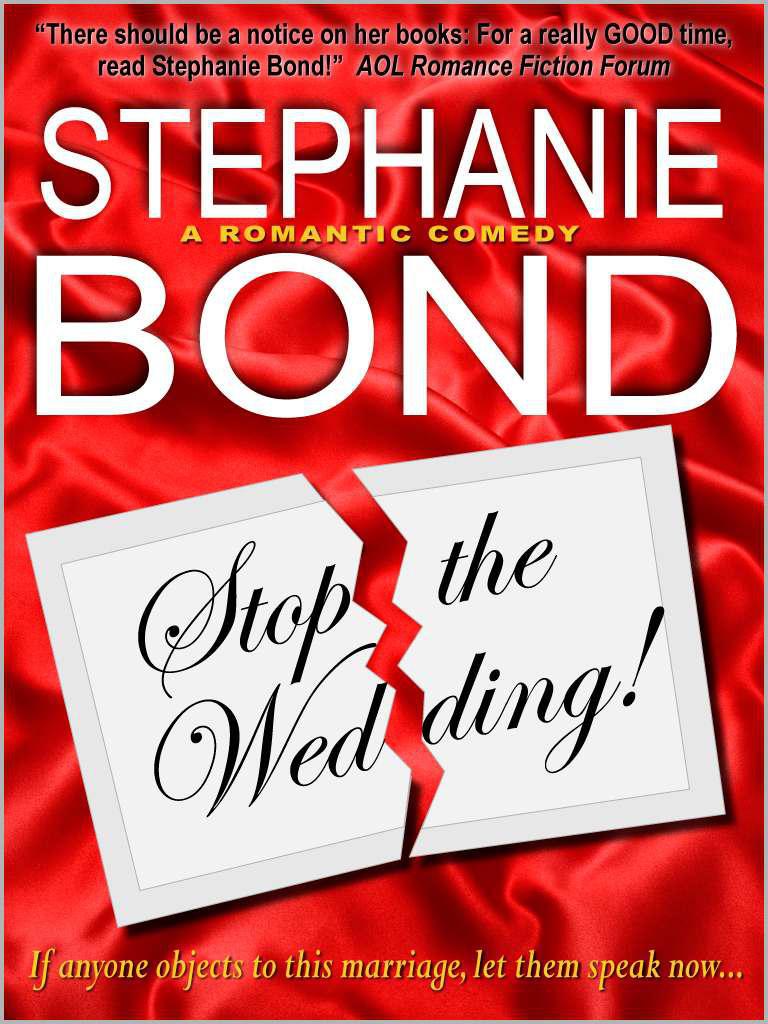 If anyone objects to this marriage, let them speak now…

Other works by Stephanie Bond

ANNABELLE COAKLEY picked up her half-eaten sandwich to make room for a pile of folders her assistant Michaela held, then juggled the phone to her opposite ear. “Mom, I’d love to chat, but right now I’m really covered up.” Mike pointed to her watch and mouthed that Annabelle was due in court in twenty minutes. Annabelle held up one finger. “Can I call you back tonight?”

A clucking sound came over the phone. “Tonight is my dance class, dear. I won’t keep you, I just called to tell you I’m getting married.”

Annabelle stopped mid-nod to her assistant and jammed the receiver closer to her ear. “You’re what?”

Her head felt as if it might implode. “Hold on, Mom.” Annabelle covered the mouthpiece and told Mike which files she needed for court, then waved her from the cramped office. As soon as the door closed, she uncovered the phone and laughed. “With all the confusion here, I must have misunderstood. I thought you said—” she laughed again, harder, “—that you were getting
married
.” She shook her head at the sheer absurdity that her sweet widowed mother would consider something so reckless.

Annabelle sobered and curled her fingers around a dagger-shaped letter opener on her desk. “To Melvin?”

“The washed up movie star?”

Her mother sighed, making Annabelle wish she had inherited her patience. “To my generation, he’s a legend.”

She stabbed the letter opener into the corkboard pad on her desk calendar. “But you’ve only known him for what, three weeks?”

“Which is roughly equal to the number of times he’s been married.”

Another sigh. “This will be Martin’s sixth marriage.”

“Six, eight—after a while, why bother counting?”

She wanted to scream in frustration. “Mother, how could you
marry
a man you’ve only known for two months?”

“Martin and I knew we were meant for each other after two
hours
, dear.”

“But… but—” She cast around for convincing words, then blurted the concern that lay closest to her heart. “But Dad’s only been gone for a little while.”

The words hung in the ensuing silence, and although Annabelle regretted the timing, she didn’t regret her honesty. Finally, Belle cleared her throat delicately. “Your father has been gone for over two years, Annabelle, and I’m lonely.”

Her heart wrenched and guilt settled around her shoulders like an itchy wool cape. “So come to Detroit for a little vacation.”

Her mother made a dissenting noise. “The last time I visited I felt as if I were imposing. You have so many responsibilities.”

Indeed, Annabelle recalled a day they’d spent shopping and her phone had rung at least two dozen times. She closed her eyes amidst surging regret. “Then I’ll come to Atlanta more often.”

“You know I’d love to see you any time. And I was hoping you’d be able to make it down for the ceremony.”

“Next Saturday,” her mother sang.

“A week from tomorrow?”
She struggled to keep the panic out of her voice. Martin Castleberry was at least seventy-five—a good twenty years older than her mother—and his romantic escapades were more legendary than her mother believed his movie career to be. She hadn’t met the man, but she remembered how he’d dominated the tabloid headlines only a few years ago when he’d married a TV starlet forty years his junior. The May-December match-up had been fodder to the late night comedians for a full three months—the duration of the ill-fated marriage.

The man was a laughingstock, and Annabelle had nearly fainted when her mother first revealed she was actually dating him. She had placated herself with the thought that while her mother was a beautiful woman, Castleberry would soon be distracted by even younger fare. Now she could kick herself for not nipping the flowering flirtation in the bud. She wet her lips. “Mom, let’s talk about this tonight, shall we?”

“So will you be able to make it down for the ceremony?”

The thought of watching her good-hearted, naive, lonely mother vow to love, honor, and cherish a playboy like Martin Castleberry made her skin crawl—Belle’s sweet loyal heart would be trampled when he moved on to another dalliance, and she’d experienced enough heartache the last two years. Loath to pile on more at the moment, Annabelle forced cheer into her voice. “I wouldn’t miss it.”

“And will you be my maid of honor?”

“Oh, thank you, dear! The ceremony will be a small affair, just a few friends. Martin suggested that we say our vows by candlelight.”

She rolled her eyes. “How…romantic.”

“I know how busy you are, so I assume you’ll fly in the day of the ceremony?”

Her teeming court docket flashed through her mind. “I’ll have to check my calendar and get back to you, Mom.” A glance at her watch brought her to her feet. “Speaking of which, I need to run. I’ll call you later, okay? I love you.”

Annabelle returned the handset and jogged across the room, her mind spinning. June might be a popular month for weddings, but no one knew better than she that it was also a popular month for divorces. Maybe the uncommonly warm weather they were experiencing inflamed domestic tempers, but it seemed that every disadvantaged woman in Detroit wanted a divorce and needed the assistance of her office. With the caseload she carried, she would be hard-pressed to spare a weekend for
paradise
, much less to witness the union of Belle Coakley and Martin Castleberry.

She shook her head and expelled a long breath. In this day and age of disposable relationships, why on earth would anyone
want
to be married?

Annabelle yanked the strap of her brimming briefcase over her shoulder, then her gaze settled upon a picture of her parents on the top of a bookshelf. With her throat tight, she lifted the silver frame and ran a finger over their smiling faces. When she’d taken the photo, who could have predicted it would be the last time they would all be together?

Her parents had built a steadfast marriage on old-fashioned values and traditional roles—relics of today’s society. Belle had stayed home, cooking and cleaning and gardening and mothering Annabelle. Her father had worked long hours at a small law firm on the outskirts of Atlanta, providing a middle-class living while managing to attend most of her weekend swim meets in high school. After Annabelle graduated college, her father had been looking forward to retirement, but a heart attack had claimed him weeks shy of his goal. Later, Annabelle had wondered if he’d suspected his health was failing, because of a peculiar request he’d made of her on one of their last outings.

Anna, promise me you’ll look after your mother if something happens to me. She’s so vulnerable.

Of course, Dad. You know you don’t even have to ask.

Losing her beloved father at twenty-six had given her insight into a house having its foundation ripped out from under its joists. Mindful of her promise to her father, she’d foregone a term of law school at the University of Michigan to help tie up the loose ends of his estate. She remembered thinking how fortunate that her parents’ property had appreciated so much in value—developers were building posh neighborhoods all around their house, which had once been considered rural.

Little did she realize the imposing structure built directly behind her mother’s home housed the lecherous Martin Castleberry.

Annabelle swallowed past the lump in her throat. How miserably she’d honored her father’s request. Her stingy visits and phone calls had driven her mother into the arms of a notorious playboy. Her eyes narrowed as she imagined the silver-haired, perpetually tanned Castleberry with his arm looped around the shoulder of a buxom pinup. The man wasn’t good enough to stand in her mother’s shadow. Her blood pressure ballooned.

A perfunctory knock on her door preceded Michaela opening the door. “Annabelle, your cab is waiting, and your real estate agent is on the phone. Are you okay?”

She drew in a long, deep breath and the detached underwire in her bra gouged her rib. What did the fact that she didn’t have time to buy new underwear say about her life? “I’m fine,” she said, her voice surprisingly strong as she replaced the picture frame. “Do me a favor, Mike?”

“Clear my calendar for next week.”

No way was Martin Castleberry going to drag her mother’s—and her own—name through the mud. She’d simply fly to Atlanta and expose him for the promiscuous thrill-seeker he was, then whisk her mother back to Detroit to live with her. Annabelle lifted her chin. “Yes. I have to stop a wedding.”

Clay Castleberry used a laser pointer to indicate the last and most impressive spike on the chart. “As you can see, over the last eight years, the Munich-Tyre Venture Fund has outperformed the Dow Jones Industrial Average by six to nine percent.” He paused to allow the French interpreter to translate, double-checking every intonation for the appropriate emphasis. “My partners and I predict—” At the sound of a timid knock on the door, he turned and bit back a reprimand as the receptionist stuck her head inside the dimly lit meeting room.

“Mr. Castleberry, there is a Mr. Jacobson on the telephone for you.”

“Tell him I’m in a meeting, and please take a message.”

Alarm seeped into his chest as his mind jumped from one tragic reason to another why his father’s friend would be placing an urgent phone call to him in Paris. He murmured, “Excuse me,” then strode from the room, blinking to adjust to the bright light of the reception area. His heart thudded in his ears as he grabbed the phone on the desk and pushed the flashing button. “Jake, what’s up?”

“Sorry to bother you, Clay, but I’m about to board a plane for New Zealand. I’ll be out of touch for a while and I wanted to talk to you before I left.”

“What? Oh, yeah, Martin’s going to outlive us all, the rogue.”

Clay’s shoulders eased with relief, but tensed again when Jacobson emitted the long whistling sound that Clay had come to recognize as a prelude to breaking the news of one of his father’s shenanigans. He glanced back toward the room full of wealthy international investors he’d left hanging, and massaged the bridge of his nose. “What did he do this time?”

“Afraid so. Your father does seem to possess an odd affinity for matrimony.”

Like father, nothing at all like son. “Who the devil is it this time, and please tell me she’s of legal age.”

“Her name is Belle Coakley. He told me she’s a neighbor of his, but he clammed up when I asked her age. I thought maybe you’d met her.”

Clay’s mouth tightened. “No, Dad hasn’t mentioned her, and I haven’t been to his place in a while.” They scarcely got along over the phone, much less in person. The twenty miles between their houses in Atlanta might as well be twenty thousand. “I’m sure this Coakley woman is some little starry-eyed wannabe who’s caught wind of the settlement check for back royalties on
Streetwise
.”