Read Storm in a Teacup Online

Storm in a Teacup 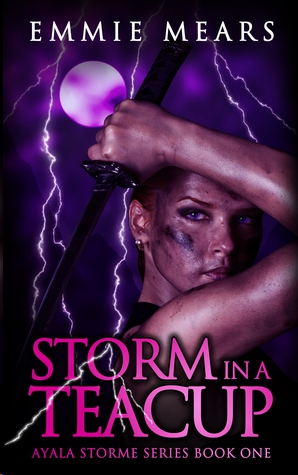 STORM IN A TEACUP

STORM IN A TEACUP

This book is a work of fiction. Names, characters, places, and incidents are either the product of the author's imagination or are used fictitiously, and any resemblance to actual persons, living or dead, business establishments, events, or locales is entirely coincidental.

All rights reserved. In accordance with the U.S. Copyright Act of 1976, the scanning, uploading, and electronic sharing of any part of this book without the permission of the publisher constitute unlawful piracy and theft of the author's intellectual property. If you would like to use material from the book (other than for review purposes), prior written permission must be obtained by contacting the author at [email protected]

Thank you for your support of the author's rights.

Published in the United States by Emmie Mears

For Kristin and Jes, who always keep fighting.

I keep my car messy so no one can hide in the backseat and scare the bejeezus out of me. At least that's what I tell everyone else. At times like this, when I'm rooting around for my SPF 120 prescription sunscreen, it's more of an inconvenience.

Being out here is better than pushing my pen around my desk, I suppose.

I find the bottle of sunblock hiding under a pair of only slightly bloodstained jeans, halfway inside an empty pizza box. The cream goes on white and greasy. What I wouldn't give to tan.

I get out of my car, sliding my favorite sword from the scabbard that rests next to my duffel bag full of sweaty gym clothes. Yeah, you heard me right. Sword. She's beautiful. Almost a saber, actually. Curved in all the right places, tapers to a delicate point, and she can slice your eyebrows in half before you can say "Hello, Dolly."

She glints in the sunlight. I don't glint. I wince. Like now. I blink into the sharp light, adjusting from the air-conditioned haven of my car to the muggy Tennessee summer. Moisture clings to my bare arms and beads on my forehead within seconds.

A truck is parked a little ways away from my car, busy not glinting in the sunlight, just like me. The truck is a rusted black piece-a. Short for piece-a-shit.

Dammit. I kick a discarded beer bottle cap and send it skittering over the gravel.

It's too bright out here. An open field isn't the place to be doing this. I reach the edge of the grasses and peer at the center of the field. Ben's out there. So is Ripper, the proud owner of the rusted black piece-a. They're both pointing their weapons at waist-level.

Jeez-oh-sakes. The critter they're pointing at doesn't clear the level of the grass. And this is my critter. They're invading my afternoon.

I stride through the waist-high weeds, resisting the urge to slash at them with my sword. That would just be unprofessional.

I feel the imp before I see it, like someone's placed a fist-sized rock on top of my beating heart. The sense is somehow a comfort, a squeeze of a teddy bear that reaffirms every step I take in the monster's direction. Ben and Ripper surely hear me whooshing through the grasses, but they don't turn. "Exactly what are you two doing here?" Gregor wouldn't dispatch three Mediators to deal with an imp.

The imp in question chitters something, but doesn't move. It's hemmed in between Ben and Ripper, gnawing on something I can't make out. The presence of the guys makes this sort of like sending three lions to take out the gopher in your grandad's carrot patch.

Ripper grunts something noncommittal and jerks his head in Ben's direction.

Why Ripper allows Ben to lead him around like he's got him on a leash, I'll never know. Ben turns toward me with a grin on his face, and I stop. Ben's cheek drips with blood from a small family of little wounds. It doesn't fit well with his ashy brown hair and farm-boy-with-a-pitchfork-handle-you-know-where looks. Not that blood complements anyone's face, really. Why is he here again?

Oh, yeah. Because he jumped at the chance to be within ten feet of me. Probably overheard Gregor on the dispatch channel. I'm gonna regret this. Should have stayed at work, out of the sun and ensconced in the air conditioning.

I start walking again. "Can't you and Ripper handle an imp without turning into a pincushion? It did that while it was eating?"

Ripper, who has his back to me, stiffens at my comment. Baby. Ben, on the other hand, grins at me again, causing a half-dried rivulet of blood on his cheek to crack and start seeping again.

I wave my sword at the area between them. "Probably shouldn't turn your back on that little fellow," I say. "Might get feisty."

The little fellow in question growls something indecipherable. His skin, steel gray and metallic in the sunlight, steams and hisses. It's not the heat – it's the sun. There's something wrapped around its neck. It looks like a thin dreadlock. Is the imp wearing human hair? Red blood drips from his mouth, and it chucks whatever it's been chewing onto the grass. For a moment, I expect it to be a bit of person. It's not. It's rabbit's head, dangling bits of fur and spinal cord.

The snarl culminates in a rasping growl, and its eyes glint at me, the color of kryptonite, just like its blood. Something squeals. The gods-damned monster has a baby bunny wedged under its foot.

"Oh, hell no," I tell the imp. I advance a step toward it, eyes on the bunny. The fucking monster killed a mama bunny and is wearing a necklace of human hair? Sometimes I hate the world.

It's the third creature I've seen wearing such a necklace in two months, too. I don't like new trends.

"Careful, Ayala. It's quick," Ripper grates, turning ever-so-slightly to look at me. Shit.

His neck and face are slashed in ten different places. One of said places is dangerously close to his carotid artery. It's also about two feet out of the imps reach. The little creature has also managed to slice off part of Ripper's blond ponytail and the leather thong that ties it. He looks more like I think a Mediator should, like he's got some grit to him – a younger, bitchier Robert Redford. Ripper's wounds are already healing, but from the looks of it, a millimeter or so closer, and he would have been watering the parched field with a sprinkler of his blood.

They nod. Great. This day is just getting better. And I have to get back to work without looking like I've been at Hannibal's Slice-n-Dice.

I take a breath. The thing with imps is that you have to get them quick. Usually it's nighttime, and we have a leg up on them. I don't know what this little bastard is doing out in Miller's Field, skin sizzling, at half past one on a Tuesday afternoon. Imps are the only brand of hellkin that can withstand the sun, but since they usually get skewered the moment they pop their heads into the daylight, they still avoid coming out before sunset. I doubt this one came out here just to munch on a family of bunnies. Either way, it doesn't matter. Mediator strength may be better in the dark, but that doesn't mean I'm Susie Homemaker at afternoon tea, either.

That baby bunny the imp's holding down ain't dying here. It's going to live a long, happy bunny life. Do bunnies get PTSD?

I push the furry critter from my mind and flash a grin. Always, always, right before a fight — even as insignificant as this one — my blood starts to sing. It's like having sparkling water in my veins. Effervescent. This is why I came trundling out here when Gregor sent me.

I whirl my sword once and fall into a back stance, left arm pointed toward the imp, right arm holding the sword poised above my head. I stand on the balls of my feet. I feel a tingle behind my right ear, and I lunge.

The imp bounds into the air, aimed at Ben. The bunny shrieks and goes streaking away toward a bush. I swing my foot around and kick Ben out of the way. He grunts and curses, but the jumping bean from hell is coming down right at me. I swing my sword in a smooth arc, ending with the point facing up. The imp lands right on it, the force of the impact causing me to drop my elbows to absorb it. Imps may look small, but they're dense.

I heft the sword again, using the momentum of the imp's impalement to fling him to the ground, then I decapitate him. I look at the fallen carcass — es — for a moment, then stab the imp through the heart. Better safe, as they say. I've been on the sorry end, and it's not fun.

Ben grumbles to his feet. Ripper scuffs his Nikes against the grass, looking abashed.

"Explain to me again why you two are out here?" I feel like glaring, but settle for rolling my eyes. They feel relieved by the motion, like scratching a hard to reach itch. My eyes always want to roll more often when I'm in proximity to Ben.

"Thought we could help," Ben says, grumble changing to a you-got-me grin in a moment. His grin is made goofier by the spray of kryptonite green mist across his face from where the imp splatter painted him with its blood. I can't help but grin back – until I remember the probable reason behind Ben turning up at my kill.

No such luck with Ripper. "We had him fifteen minutes ago. Ben insisted on waiting for you, since it was your call and all."

Right. That's my cue. "I gotta go, guys. Catch you later." I turn and start walking back to my car.

A startled
whoomph
makes me spin back around just in time to see Ben go down as if he's been clotheslined. Ripper tightens his grip on his sword, meeting my eyes from five feet away.

"You okay, Wheedle?" Ripper takes a step toward the dent in the grasses where Ben lies on his back.

"I'm guessing it wasn't a pissed off rabbit." I look around, scanning the field. A light breeze from the west tosses the stems around us. Except there. Just behind Ben, the swaying grass changes direction.