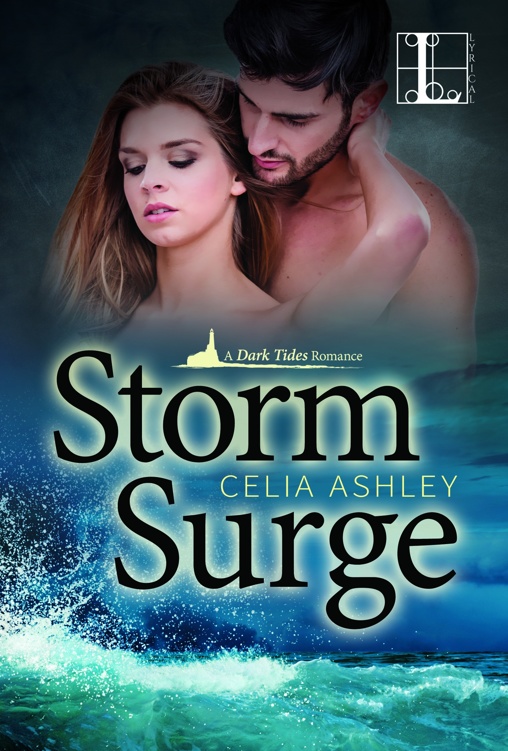 Named after a goddess who turns her lovers to stone, an insular New England coastal town holds more secrets than it can keep…

Torn from her hometown and her father as a child, Paige Waters’ last memory of both is fraught with mystery and confusion. Now, sixteen years later, with both her parents gone, Paige returns to Alcina Cove, certain there is more to the painful story than she’s been led to believe. The answers must lie within the community, buffered from the larger world by the sea; but when she finds the townspeople more reticent than ever, her only hope is the intriguing man who lives in her childhood home—if she can break down his reserve…

A fisherman turned writer, Liam Gray is haunted by secrets of his own, some of which are deeply entangled with the closure Paige seeks. But as he and Paige grow intimate, their attraction building, Liam finds himself torn between truth and betrayal. Whichever he chooses will risk his future with Paige and cause someone pain—until an even greater danger leaves him no choice…

To the marks against the silence

I would like to give thanks here to Janet Hetherington, who—w
ith much exuberance—unearthed the mythology of the goddess Alcina and suggested hers as a name for the town in which this series is set. After learning of the goddess’s propensity for turning discarded lovers into stone, I added to Book II of the Dark Tides Series the stone circle named after the goddess and from which the fictional town derives its name.

I wish also to thank my wonderful editor, Corinne DeMaagd. Her enthusiasm and her expertise have been invaluable. When initially approached about turning the first book, Dark Tides, into a series, I bemoaned the task of creating synopses for the next two books in record time, but with Corinne’s assistance, the task became more pleasure than pain. Corinne remains a joy to work with throughout every editorial process, and I can only hope I have not been too much of a nuisance in return.

Thank you to all the wonderful women in my writers group for their friendship, the brainstorming sessions, the spontaneous bouts of cathartic release.

I would like to acknowledge my familiarity with the paranormal. Although I have experienced nothing near to what I put my characters through in my books, I have had encounters that have changed my life view. If you would like to read more about them, I do make the occasional entry in my blog about things that go bump in the night.

Last but far, far from least, I wish to thank my readers—for their loyalty and the enlightening comments they offer about my work and life in general.

Of his bones are coral made:

Those are pearls that were his eyes:

Nothing of him doth fade,

But doth suffer a sea-change

Into something rich and strange.”

She’d forgotten how callous and greedy gulls’ cries could be, and yet how evocative of place. Sixteen years of exile vanished in the sound.

Mom, what is that?

Paige considered her friends’ warnings about coming home, how they had cautioned her regarding sounds and smells splitting open the aged cask of memory. In the past, fragments had occasionally risen from the murky recesses, but they always slipped back into the dark without being fully realized. She didn’t know what she feared more—the memory itself or the darkness holding it at bay.

Keeping her distance from the shoreline, Paige studied the seabirds’ flashing ghostly wings through the gloom, unable to see what incited their frenzy. Beyond, waves crested in thunderous approach. Paige shoved her hands into her pockets. Out on the water, a ship appeared to barely move, the lights lining its hull burning like pinprick holes. Sunrise was not yet a glimmer where sea met sky. She turned away.

To the west, the sky possessed a dull radiance. Traffic lights and street lights burned through the wee hours in Alcina Cove, a pervasive smoky glow in comparison to the bright lighthouse signal rotating in the distance, warning sailors of the rocky coast, guiding them home. Alcina Cove had grown in the years since Paige had been gone. She’d barely recognized the meandering road that led to her old home, bordered now by the sprawl from the town’s center.

The night she and her mother fled with nothing but a suitcase between them, the sky had been black except for the lighthouse beacon, the stars above blocked by heavy clouds. She remembered how the sedan’s headlights had created a stark, white tunnel, remembered her mother hunched forward over the steering wheel, peering ahead through the eye not swollen shut. Rust discolored her blouse, more blood dripping from her mouth. Paige had attempted to staunch the flow with a cloth, but had given up. At thirteen, she’d understood only one thing with clarity. They were never coming back.

Mom, who did this to you? Was it Dad?

Paige heard a noise and turned to scan the dark beach. She found nothing and started walking again away from the raucous, opportunistic gulls and their meal. The breeze wrenched at her curly hair, tumbling sections free from her ponytail. She attempted to tuck the trailing strands behind her ears, only to discover them tangled and damp from the sea air.

Her eyes burned, but back at the rental cottage, an uncomfortable bed awaited her. High threadcount sheets covering a lumpy mattress didn’t make the bed any more restful. And the freshly laundered pillow case was tainted by the tang of seaborne dampness. She’d tossed and turned, disturbed by the combination of clamminess and lavender scent. It reminded her of the sheets on her childhood bed.

Eventually a desire to flee the cottage had prevailed, forcing her from bed and into the night wearing sneakers and a sweatshirt jacket over her nightclothes—a T-shirt and ratty cut-off sweatpants. Sand sliding beneath the shoes’ smooth soles had, until then, been all but forgotten. It had only taken five minutes wandering the beach to get her rhythm back.

Paige turned toward the structural silhouette on the rise above the beach. A narrow chimney rose above the angled roof against the backdrop of the town’s lights. For some reason she’d always pictured the chimney succumbing to gravity, broken brick and mortar scattered on the ground, as if representative of what had happened to her family. But there it stood, maintaining its crazy tilt against Newton’s laws. So much for symbolism.

With her father’s passing, she wondered if the house might be empty, abandoned. She saw no lights in any of the windows, some of which lacked reflection, possibly missing panes. The cedar shakes on the walls had weathered to a color like tarnished silver in the darkness, and beneath the porch overhang a shutter on a lower casement hung canted by a broken hinge.

Paige’s stomach twisted in a spasm beneath her diaphragm. She pressed the heel of her palm against her belly.

“Are you aware there’s a penalty for trespass?”

Paige jumped, a solitary expletive flying from her lips. Heart in her throat, she hastened several steps away before turning to face the speaker. “Sorry,” she said, breathing hard. She squinted in an effort to make out a visible face in the shadows, but was unable to determine anything but gender.

“For what? The fact you’re trespassing? Or using a word that would have gotten my mouth washed out with soap as a kid?”

Paige couldn’t believe this guy was chastising her for swearing after he’d practically jumped out at her in the dark. What the hell? “You startled me.”

“You’re not from around here, are you?” the man said. Not like a question. More like an accusation. Paige bristled despite standing in the dark five feet from an unseen stranger on an empty stretch of beach before dawn. Even the ravenous gulls had abandoned their midnight repast. The waterfront was deserted.

“And what makes you so sure I’m not?”

Paige clamped her lips together. More than half a lifetime in Tennessee had altered her speech’s cadence but hadn’t fully erased the characteristics of an early New England dialect, which made for a strange accent indeed. If the man hadn’t been so antagonistic, she would have admitted as much.

“Nothing to say to that?” he nudged.

Her mouth dropped. “You’re right. With that attitude, I probably should say goodnight.”

“The next time you decide to take a stroll on this beach, seek permission, day or night.”

“Understood.” Paige started to turn away, but irritation got the better of her. She spun back. “I didn’t realize I needed an invitation.” Who did this guy think he was? There was only one man who could claim proprietary rights to this stretch of beach, and he was dead. Yanking her fist from her pocket, she jerked a thumb at her former home over her shoulder. “Do you live there?”

“I own ‘there,’” he said. “Bought the place from Edwin Waters just before he died.”

“Oh.” One of the things she was planning to check was the allocation of the house and land before her father’s death. The knowledge her father had sold her old home outright to someone hit her harder than if he’d walked away from it. Not that she would have expected him to leave it to her, but by selling it, he’d made it pretty clear he hadn’t even considered that option. Tears stung her tired eyes, nausea sweeping through her stomach. “Well, doesn’t look like you have much pride of ownership, I’ll tell you that.”

As soon as she spoke, she realized she should have taken a moment to gather her emotions under a tighter rein.

“You can tell that in the pitch black, can you?” His voice traveled like rumbling thunder.

Paige attempted to tame her annoyance. If this man had bought her old home, he might be in possession of information she could use. The predawn gloom had lightened, revealing a hulking shadow well over six feet tall. Paige slid her left foot behind her and shifted her weight over it, hoping he wouldn’t notice the movement away. She didn’t want anything in her actions to indicate fear. She had learned the tactic in a self-defense course she’d taken several years past. The course had been fairly useless except the one stratagem. Never. Act. Afraid.