Read Strengthen What Remains (Book 2): A Time to Endure Online

Strengthen What Remains (Book 2): A Time to Endure 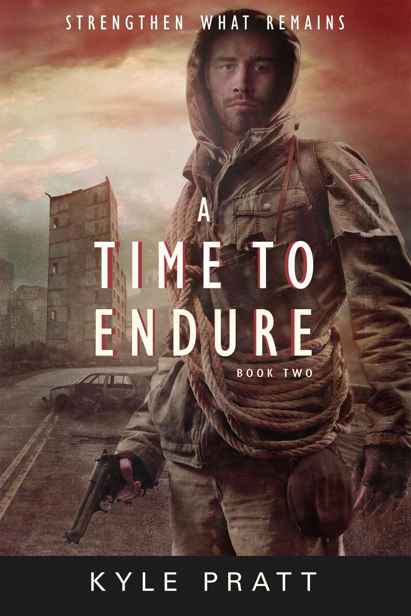 A Time to Endure

A Time to Endure

This is a work of fiction. Names, characters, places, and
incidents either are the product of the author’s imagination or are used
fictitiously, and any resemblance to actual persons, living or dead, events, or
locales is entirely coincidental.

All rights reserved. No part of this book may be used or
reproduced in any manner whatsoever without written permission from the author.

Writing
is usually done alone, but creating a book is a cooperative effort.

Many
authors say that their spouse is their biggest fan. My wife Lorraine most
certainly is mine. This book would not exist without her support, ideas and
constant encouragement.

I
owe a huge debt of gratitude to the members of my critique group; Robert
Hansen, Barbara Blakey, Carolyn Bickel, Debby Lee and Kristie Kandoll. They are
more than fellow writers, they are friends and mentors. In our weekly meetings
I continue to learn the writing craft.

Also
by the Author

The
frigid mud sucked the warmth from Caden’s body. He moved close to the
blackberry bramble for concealment. This ground was drier, but the thorns
slashed his skin and scratched at his camo uniform.

On
either side a soldier lay watching with him. Looking through the binoculars, he
saw several Humvees and soldiers on the west edge of Hansen. He was certain
more were just out of sight.

He
shivered.
Two months ago I was promoted
to Chief Foreign Policy Advisor for Senator Stevens. Now the senator is dead, the
capital destroyed and I’m lying on the cold, muddy ground about to fight a
battle in Washington
state
.
Funny
how things change in our lives.

With
the binoculars he scanned the forces arrayed against him. “They’ve been there
for hours. Why haven’t they made a move?”

The
question was rhetorical, but one of the privates beside him shrugged.

As
they continued to watch the convoy, the red-haired boy and girl Caden had seen
often in the area strolled across the field to the stream carrying fish traps.

The
boy was in his late teens, the girl a year or two younger. Together they moved
along the bank, and then put their traps in the water just twenty yards from the
recon position. Afterwards, the two sat idly nearby looking in the direction of
the trucks.
Go home kids.
But there was
no way to communicate the message without exposing his position.

Caden
pulled out his radio.
“CW returning to unit.”
Watching
the scouts, he whispered, “Keep watch on the convoy. When they move out, alert
us.” Crouching, he headed back around the corner with a silent prayer on his
lips.
Please God, keep those kids safe.

Zach’s
stomach growled as he pushed back his blankets. He turned on the lamp beside
the bed and watched the steam of his breath rise into the cold air. There was
no hurry. He knew that for him and his sister, Vicki, this February morning
would be like all recent ones, cold and wet; a time to be endured as they
labored to stave off hunger for another day.

The dawn had yet to peek over the horizon as
the two teens rose from their beds and donned coats, gloves, caps and waders.
Vicki stuffed the backpack with hot tea, smoked fish and other supplies as Zach
gathered fish traps and nets.

“Leaving
so early?” their mother asked, as she staggered into the room.

She
slumped into a chair and shook her head. “I don’t feel well.”

“Don’t
be disrespectful. I haven’t had anything to drink for three days now.”

Because you can’t find
anything
.
“Good. Come on, Sis.” Zach exited the pastel blue, single-wide trailer that was
their home.

The
predawn glow provided enough light for Zach to lead his sister along the narrow
path through the woods. He had walked this way many times, along the streams
that flowed through the valley. Just visible under the canopy of cedar and fir
trees were the ferns that dotted much of the forest. But this was not the lazy
pastime of earlier days. He would not have gotten up so early or on such a cold
morning for fun.

Since
the terrorists had set off nuclear bombs in Washington D.C., Seattle and other
cities, people had bought or looted everything in the stores. Food was scarce
and fish were now a primary source of nourishment and barter for his family.

Zach
set down the wire mesh traps at the edge of the woods and pulled the cap lower
on his head. He looked back at his sister and her long red hair. She often
complained about the color or frizz of it, but right now he envied her well-covered
ears.

In
the distance Zach heard the rhythmic mechanical clatter of vehicle engines. Gas
was rare and expensive so the sound of engines demanded attention. Sometimes he
saw a police car and occasionally military trucks, but rarely a private car.
The rumble came from the highway at the edge of Hansen, the nearby town. He
picked up the traps and continued down the path. They were headed in that
direction.

The
waist high grass was thick and the trees thin as the two moved along a muddy
path toward the stream. Zach saw the water now, but here it ran too deep for
the traps. They would continue along the bank to another location, close to the
highway.

It
took only minutes to reach his favorite spot. The culvert where the water
flowed under the road was fifty-feet farther downstream, but despite the road
being nearby the only sound was the rippling of the water and birdsong from the
nearby forest.

The
creek was wide, but shallow. The fish preferred a narrow, deeper channel near
the bank. That was where they would place their traps. Vicki knew the spot well
and, reaching it, dropped the backpack on the bank. The two waded into the cold
water each holding a wire cage.

Zach
pushed a pole through the wire mesh of the trap into the silt below and then
gathered rocks. As they worked to secure the first snare, the roar of engines
returned.

“Do
you hear that?” Vicki asked.

She
stuck out her tongue and headed back to shore.

“Oh,
very mature.” Zach frowned. At barely fifteen she was a year younger than him
and, in his opinion, still very much a kid. He bent low to weigh down the
second cage with a few of the stones they had gathered. When the trap was
secure, Zach sloshed to shore. He pulled a towel from the backpack and wiped
the frigid water from his arms, and then held the warm thermos in his hands. He
joined his sister in peering over the bank near the road.

The
grass was low in the rocky soil along the highway and with Hansen located slightly
uphill from them, he could see the road and three, maybe more, army trucks
along it with smoke rising from their tailpipes. An American flag fluttered in
the morning breeze. Why are they just parked there wasting gas?

Vicki
slid below the bank. “We’re done here; let’s go on to the next spot.”

Vicki
raised her head back over the edge and watched with him for several minutes.
“I’m going to set the last two traps.”

As
an orange sun topped the nearby hills, Zach counted more army vehicles, mostly
Humvees and jeeps, parked along the highway shoulder. Nothing happened and he started
to follow his sister, when a single Humvee rolled slowly down the road. He
caught a glimpse of two people inside as it passed. Then he watched as it
continued down the highway, around the curve, toward the lake. When he returned
his gaze to the main group, dozens of fighters stood on either side of the
road.

The
troops moved into the field, like hunters flushing birds from bushes. These were
American troops, but something told Zach to be cautious and unseen. He moved
into the tall grass a few yards up the bank. He couldn’t see as much, but if he
remained still in his brown waders and a green shirt, he would be difficult to
detect.

A
Humvee raced back from the lake. Less than a minute later, a dozen truck
engines started almost at once. As the seconds ticked by he heard the troops
approaching.

Grass
rustled behind him. Zach turned.

Two
soldiers moved from the bramble on the far side of the stream. How long had they
been there? They were dressed in the same uniform as the men coming down the
road, but they stayed hidden in the shadow of the thicket. One soldier looked
right at him. The man crouched lower and motioned for Zach to leave. The soldier
reached into the bramble for something. Zach realized it was a radio.

A
shot rang out.

The
soldier collapsed back into the bushes.

The
other returned fire and jumped for cover.

Zach
wanted to run, but his legs refused to move.

The
sound of gunfire became deafening.

The
boy crouched low in the grass.

Dirt
and leaves flew around the surviving soldier. Then he fell hard onto the first
man and their blood flowed into the stream.

As
the gunfire ceased, Zach’s breathing was so loud that he feared it would reveal
his position. He struggled to control it as he tried to understand the bloody
spectacle just a few yards from him. Why were American soldiers shooting at
other Americans?

Gun
at the ready, another soldier burst from the tall grass.

Vicki
appeared from nowhere and screamed.

The
soldier jerked his gun in her direction.

The
man took a deep breath. “Hide,” he commanded. “A lot of people will die today.”

Acquainted With the Night (9781101546000) by Maitland, Piper
String Bridge by Jessica Bell
Tom Clancy Under Fire by Grant Blackwood
Mrs. Everything by Jennifer Weiner
The Reluctant Bachelorette by Rachael Anderson
The Vanishing Season by Anderson, Jodi Lynn
La naranja mecánica by Anthony Burgess
The Marquess’s Ward by Elizabeth Reed
Infatuation- Harmless Military 7 by Melissa Schroeder
Drop of the Dice by Philippa Carr