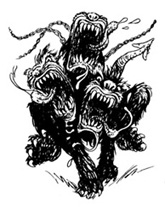 For Lindsey Heaven, my wonderful editor,
and for Philippa Milnes-Smith, my equally
wonderful agent, for not laughing at me
(well, OK, not too much!) when I first suggested
I'd like to write a series about superpowersâ¦

a hawk swooping towards a ruined castle on a hill. With a savage scream, the bird flies into the castle keep. As it lands beside the one tower that is still standing, its body starts to stretch and grow. Within seconds it has become a woman. She is twice as tall as an ordinary woman and a cloak of brown-grey feathers swirls from her
shoulders. Her black eyes flash with angry fire.

She claps her hands together and a square of stones on the inner wall of the tower crumbles.

As the dust clears, a tall man with long hair and a noble face looks out 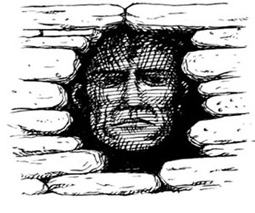 through the gap. He is trapped inside the tower's thick walls. This is the superhero Hercules. He meets the evil goddess's angry gaze without flinching. âAnother day dawns, Juno,' he says. âBy the end of today I will have my sixth superpower back.'

âYes,' Hercules snaps back. âFor five days now you have set the two human boys a task to do each day. Each day they have won a superpower back for me. Soon I will have all my powers back and you will not be able to keep me as your prisoner any longer. I will break free from these walls!' He thumps the inside of the tower with both fists. 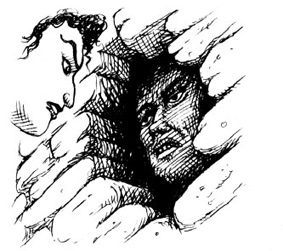 âYou cannot!' Hercules' voice raps out. âYou made a deal with them, Juno. The boys are allowed to choose one of my superpowers each day to help them complete a task you set. If they succeed the superpower returns to me. You know as well as I, that although the
boys can be hurt or killed while carrying out the task, you must
not
injure them directly. You cannot break the rules, Juno. Gods play fair when they deal with humans.'

âYou dare to tell
me
what gods do?' Juno cries in outrage.

They stare at each other, superhero and evil goddess. They have been enemies for centuries.

âIt is true!' Juno spits. âI might not be able to kill the boys myself while we have a deal, but I can make the task they have to complete as dangerous as I like.' Her eyes light up suddenly. â
Doubly
dangerous in fact.'

Hercules frowns. âWhat do you mean?'

âYou'll find out soon enough!' Juno's
cruel mouth curves into a smile. âAnd so will they!' She claps her hands. There is a crash of thunder and the stones re-form over Hercules, trapping him once again in his magical prison. âWho's powerless now, Hercules?' Juno breathes. A flash of lightning strikes down. As it hits the ground, the goddess transforms into a hawk again.

Beating her powerful wings, she speeds away across the dawn-streaked sky.

Max Hayward and Finlay Yates were facing each other in the lounge in Max's house. Their hands were balled into fists. âAfter three,' Max said, looking at Finlay.

Their fists moved lightning fast and they shouted at the same time.

âI win this time,' Finlay said. âPaper wraps stone.' He grabbed Max's hand, and made his voice sound all creepy. âI am the evil hand of paper. I will destroy you!' He changed to a dalek's voice
from
Doctor Who
. âI will exterminate!' He grabbed Max round the neck.

Max ducked and grabbed Finlay's legs behind the knees.

âOof !' Finlay exclaimed as he lost his balance. He yanked Max's ankles as he fell, and Max crashed down with him. They wrestled for a moment and then Finlay suddenly pulled away, his thick blonde hair sticking up.

âHey, I've had an idea! Let's change the game. How about cannonball, sword and net instead of stone, scissors, paper?'

Max realized what he was getting at. âYeah! So a sword could cut a net but be blown up by a cannonball?' he said.

Finlay nodded. âAnd a net could catch a cannonball. What d'you reckon?'

âIt's cool!' Max replied. âBetter than
the real game. I've never got that bit about paper beating stone by wrapping round it, but a net
could
actually catch a cannonball. What hand shapes should we use?' 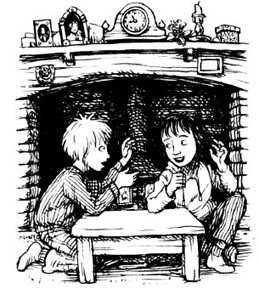 They were just working them out, when Max's dad came into the room. âHi, you two. Got any plans for today?'

âWe're going to the castle again,' Max replied, glancing at the clock above the mantelpiece. It was eight-thirty. âWe should go soon,' he said to Finlay.

âYou've been at the castle every day this half-term,' Mr Hayward said curiously. âWhat are you doing there?'

Finlay wondered what Mr Hayward would say if they told him the truth â that they were helping the superhero Hercules escape from his castle prison.

âOh, well, so long as you're having fun and not getting into any trouble,' said Mr Hayward.

Not much
, Finlay thought, picturing the Man-Eating Birds they had killed the day before. Max still had a wound on his arm from where one of the birds had slashed at him with its razor-sharp beak. Every day, either Finlay or Max seemed to end up with a scar from facing Juno's challenges.