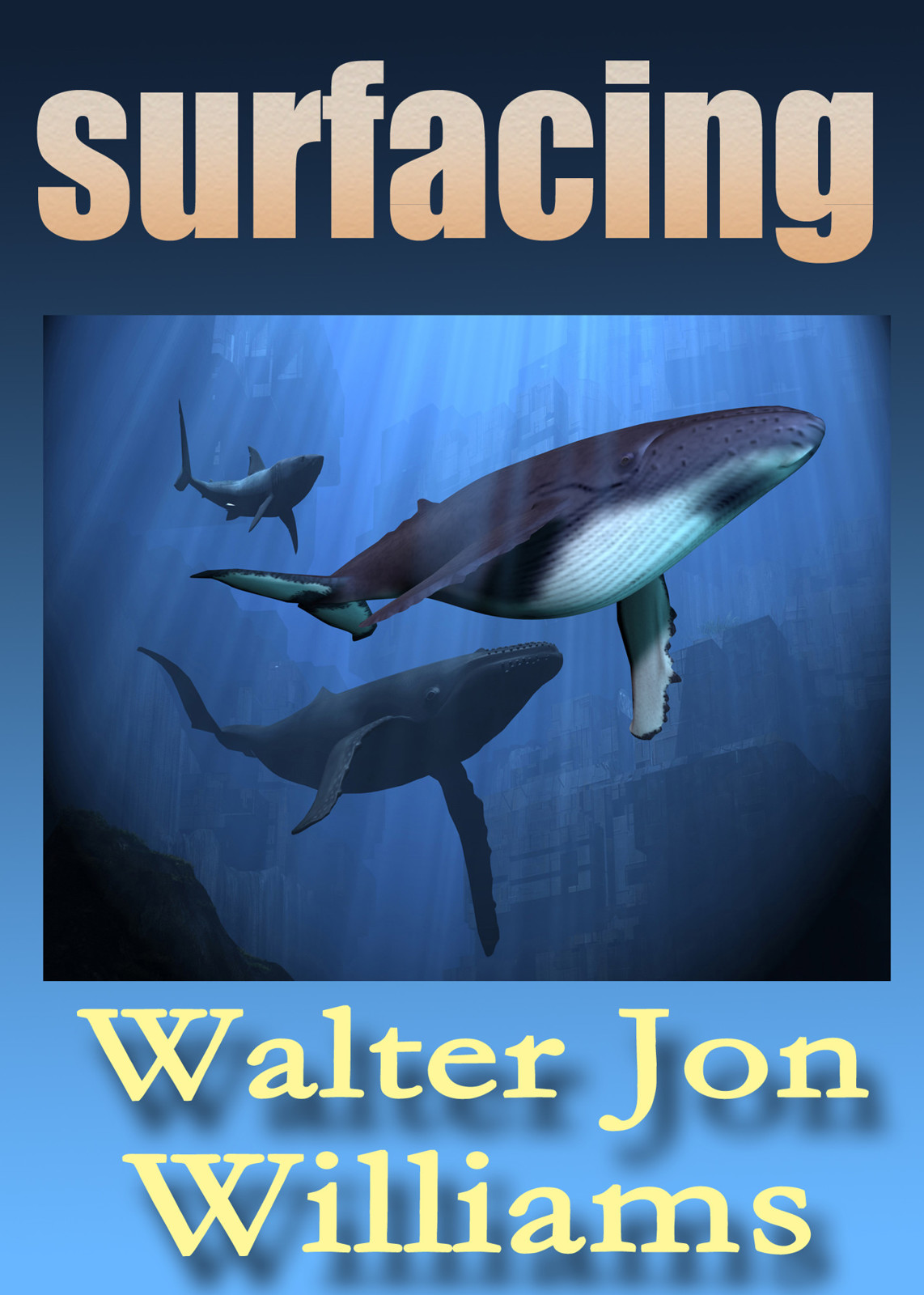 Nominated for Hugo and Nebula awards, “Surfacing” is the story of Anthony, an emotionally scarred researcher who finds it easier to talk to whales and to aliens than to members of his own species. Until a stranger named Philana enters his life, with a terrifying problem of her own that dares him to break through the surface of his world.

There was an alien on the surface of the planet. A Kyklops had teleported into Overlook Station, and then flown down on the shuttle. Since, unlike humans, it could teleport without apparatus, presumably it took the shuttle for the pleasure of the ride. The Kyklops wore a human body, controlled through an
n
-dimensional interface, and took its pleasures in the human fashion.

The Kyklops expressed an interest in Anthony’s work, but Anthony avoided it: he stayed at sea and listened to aliens of another kind.

Anthony wasn’t interested in meeting aliens who knew more than he did.

The boat drifted in a cold current and listened to the cries of the sea. A tall grey swell was rolling in from the southwest, crossing with a wind-driven easterly chop. The boat tossed, caught in the confusion of wave patterns.

It was a sloppy ocean, somehow unsatisfactory. Marking a sloppy day.

Anthony felt a thing twist in his mind. Something that, in its own time, would lead to anger.

The boat had been out here, both in the warm current and then in the cold, for three days. Each more unsatisfactory than the last.

The growing swell was being driven toward land by a storm that was breaking up fifty miles out to sea: the remnants of the storm itself would arrive by midnight and make things even more unpleasant. Spray feathered across the tops of the waves. The day was growing cold.

Spindrift pattered across Anthony’s shoulders. He ignored it, concentrated instead on the long, grating harmonic moan picked up by the microphones his boat dangled into the chill current. The moan ended on a series of clicks and trailed off. Anthony tapped his computer deck. A resolution appeared on the screen. Anthony shaded his eyes from the pale sun and looked at it. 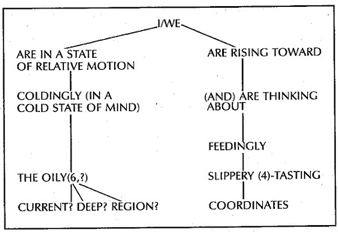 Anthony gazed stonily at the translation tree. “I am rising toward and thinking hungrily about the slippery-tasting coordinates” actually made the most objective sense, but the righthand branch of the tree was the most literal and most of what Anthony suspected was context had been lost. “I and the oily current are in a state of motion toward one another” was perhaps more literal, but “We (the oily deep and I) are in a cold state of mind” was perhaps equally valid.

The boat gave a corkscrew lurch, dropped down the face of a swell, came to an abrupt halt at the end of its drogue. Water slapped against the stern. A mounting screw, come loose from a bracket on the bridge, fell and danced brightly across the deck.

Wrong, he thought, there is no Other in the Dwellers’ speech.

We, I and the screw and the deck, are feeling cold.

We, I and the Dweller below, are in a state of mutual incomprehension.

Inchoate anger burned deep inside him.

Anthony saved the translation and got up from his seat. He went to the bridge and told the boat to retrieve the drogue and head for Cabo Santa Pola at flank speed. He then went below and found a bottle of bourbon that had three good swallows left.

The trailing microphones continued to record the sonorous moans from below, the sound now mingled with the thrash of the boat’s screws.

The screw danced on the deck as the engines built up speed. Its state of mind was not recorded.

The video news, displayed above the bar, showed the Kyklops making his tour of the planet. The Kyklops’ human body, male, was tall and blue-eyed and elegant. He made witty conversation and showed off his naked chest as if he were proud of it. His name was Telamon.

His real body, Anthony knew, was a tenuous incorporeal mass somewhere in
n
-dimensional space. The human body had been grown for it to wear, to move like a puppet. The
n
th dimension was interesting only to a mathematician: its inhabitants preferred wearing flesh.

Anthony asked the bartender to turn off the vid. The yacht club bar was called the Leviathan, and Anthony hated the name. His creatures were too important, too much themselves, to be awarded a name that stank of human myth, of human resonance that had nothing to do with the creatures themselves. Anthony never called them Leviathans himself. They were Deep Dwellers.

There was a picture of a presumed Leviathan above the bar. Sometimes bits of matter were washed up on shore, thin tenuous membranes, long tentacles, bits of phosphorescence, all encrusted with the local equivalent of barnacles and infested with parasites. It was assumed the stuff had broken loose from the larger Dweller, or were bits of one that had died. The artist had done his best and painted something that looked like a whale covered with tentacles and seaweed.

The place had fake-nautical decor, nets, harpoons, flashing rods, and knick-knacks made from driftwood, and the bar was regularly infected by tourists: that made it even worse. But the regular bartender and the divemaster and the steward were real sailors, and that made the yacht club bearable, gave him some company. His mail was delivered here as well.

Tonight the bartender was a substitute named Christopher: he was married to the owner’s daughter and got his job that way. He was a fleshy, sullen man and no company.

We, thought Anthony, the world and I, are drinking alone. Anger burned in him, anger at the quality of the day and the opacity of the Dwellers and the storm that beat brainlessly at the windows.

“
Got
the bastard!” A man was pounding the bar. “Drinks on me.” He was talking loudly, and he wore gold rings on his fingers. Raindrops sparkled in his hair. He wore a flashing harness, just in case anyone missed why he was here. Hatred settled in Anthony like poison in his belly.

“Got a thirty-foot flasher,” the man said. He pounded the bar again. “Me and Nick got it hung up outside. Four hours. A four-hour fight!”

“Why have a fight with something you can’t eat?” Anthony said.

The man looked at him. He looked maybe twenty, but Anthony could tell he was old, centuries old maybe. Old and vain and stupid, stupid as a boy. “It’s a game fish,” the man said.

Anthony looked into the fisherman’s eyes and saw a reflection of his own contempt. “You wanna fight,” he said, “you wanna have a
game
, fight something
smart
. Not a dumb animal that you can outsmart, that once you catch it will only rot and stink.”

That was the start.

Once it began, it didn’t take long. The man’s rings cut Anthony’s face, and Anthony was smaller and lighter, but the man telegraphed every move and kept leading with his right. When it was over, Anthony left him on the floor and stepped out into the downpour, stood alone in the hammering rain and let the water wash the blood from his face. The whiskey and the rage were a flame that licked his nerves and made them sing.

He began walking down the street. Heading for another bar. 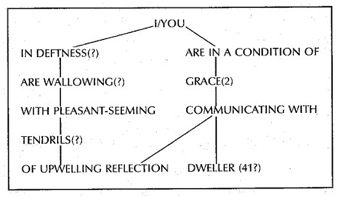 GRACE(2) meant grace in the sense of physical grace, dexterity, harmony of motion, as opposed to spiritual grace, which was GRACE(1). The Dweller that Anthony was listening to was engaged in a dialogue with another, possibly the same known to the computer as 41, who might be named “Upwelling Reflection,” but Deep Dweller naming systems seemed inconsistent, depending largely on a context that was as yet opaque, and “upwelling reflection” might have to do with something else entirely.

Salt water smarted on the cuts on Anthony’s face. His swollen knuckles pained him as he tapped the keys of his computer deck. He never suffered from hangover, and his mind seemed filled with an exemplary clarity; he worked rapidly, with burning efficiency. His body felt energized.

He was out of the cold Kirst Current today, in a warm, calm subtropical sea on the other side of the Las Madres archipelago. The difference of forty nautical miles was astonishing.

The sun warmed his back. Sweat prickled on his scalp. The sea sparkled under a violet sky.

The other Dweller answered.

Through his bare feet, Anthony could feel the subsonic overtones vibrating through the boat. Something in the cabin rattled. The microphones recorded the sounds, raised the subsonics to an audible level, played it back. The computer made its attempt. 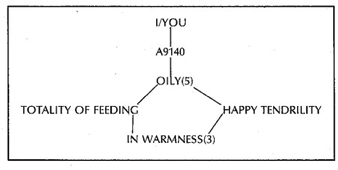 The Dweller language, Anthony had discovered, had no separation of subject and object; it was a trait in common with the Earth cetaceans whose languages Anthony had learned first. “I swim toward the island” was not a grammatical possibility: “I and the island are in a condition of swimming toward one another” was the nearest possible approximation.

The Dwellers lived in darkness, and, like Earth’s cetaceans, in a liquid medium. Perhaps they were psychologically unable to separate themselves from their environment, from their fluid surroundings. Never approaching the surface— it was presumed they could not survive in a non-pressurized environment— they had no idea of the upper limit of their world. They were surrounded by a liquid three-dimensional wholeness, not an air-earth-sky environment from which they could consider themselves separate.

A high-pitched whooping came over the speakers, and Anthony smiled as he listened. The singer was one of the humpbacks that he had imported to this planet, a male called The One with Two Notches on His Starboard Fluke.

Two Notches was one of the brighter whales, and also the most playful. Anthony ordered his computer to translate the humpback speech.

Anthony, I and a place of bad smells have found one another, but this has not deterred our hunger.

The computer played back the message as it displayed the translation, and Anthony could understand more context from the sound of the original speech: that Two Notches was floating in a cold layer beneath the bad smell, and that the bad smell was methane or something like it— humans couldn’t smell methane, but whales could. The over-literal translation was an aid only, to remind Anthony of idioms he might have forgotten.

Anthony’s name in humpback was actually He Who Has Brought Us to the Sea of Rich Strangeness, but the computer translated it simply. Anthony tapped his reply.

What is it that stinks, Two Notches?

That is a good name, Two Notches.

I and a small boat discovered each other earlier today. We itched, so we scratched our back on the boat. The humans and I were startled. We had a good laugh together in spite of our hunger.

Meaning that Two Notches had risen under the boat, scratched his back on it, and terrified the passengers witless. Anthony remembered the first time this had happened to him back on Earth, a vast female humpback rising up without warning, one long scalloped fin breaking the water to port, the rest of the whale to starboard, thrashing in cetacean delight as it rubbed itself against a boat half its length. Anthony had clung to the gunwale, horrified by what the whale could do to his boat, but still exhilarated, delighted at the sight of the creature and its glorious joy.