Read Icing on the Cake Online

Icing on the Cake 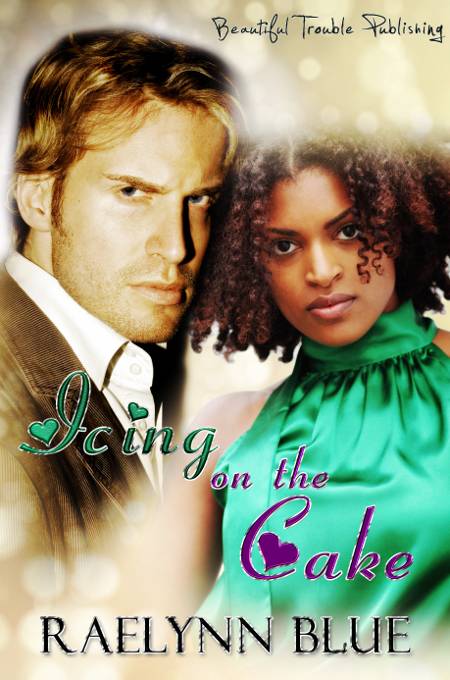 Thank you Jayha and Jeanie of Beautiful Trouble Publishing for believing in my work, my writing, and my crazy idea to write about the Piedmont Triad area. Thank you Dréa for all of the amazing support!!

N
OTE
ABOUT
E
B
OOKS

eBooks are NOT transferable. Re-selling, sharing or giving away eBooks is a copyright infringement.  No part of this book may be reproduced or transmitted in any form or by any means without written permission of the author or Beautiful Trouble Publishing.

“Aerial, table sixteen is chomping at the bit! Get your hefty ass in gear!” Antonio said, a wide smirk on his sweaty face. He watched her over the row of tea and coffee selections. His button-down shirt carried large, circular wet stains under the arms and around the neck. Antonio’s hairy hands were on his hips.

The people piled against the u-shaped counter inside Tate Street Café seemed to collectively pause at the comment. The room’s whispery conversations dropped and a tense energy swelled like an inflated balloon—pressing against Aerial’s person. Standing near the kitchen’s entrance, she rolled her eyes and popped her gum. Aerial stepped around the tables and people standing, drawing close to them, every eye on her, like a dozen flies. Sure, it was silly, but she did have a reputation to uphold and no one was going to make her feel bad about her big, beautiful body, especially not Antonio who spent most of their working hours trying to brush against the very large ass he’d just publicly criticized.

“Don’t be mad, Antonio, that your little chica doesn’t have these thick curves.” She waved her hands over her luscious hips and thighs clad in ebony jeans.

Garrison snorted from his position by the coffee cisterns before catching himself. She winked at the other clerk as she headed to table sixteen. Tate Street’s Café brimmed with college kids and professors at dusk. Some sat in isolation, a party of one, with laptop opened, earbuds in. She shook her head. How could they come to such an open and public place and still manage to isolate themselves like that? When she went to a café, she people watched. As an actress, she had an innate ability to read people. Often, she felt drawn to those injured and in need. Her empathy made her good at what she did. Without really trying, she could connect to those emotions when in character. If people watching were a sport, she’d get a gold medal. Listening to conversations, accents, and dialects, smelling the different fragrances on the air, in hair, or on people as they passed by, and of course, talking to people. She loved talking to others and observing and absorbing culture, life, and body languages.

It made her a great actress.

“Sorry about the wait. I’m Aerial, your server. What can I get you today?” she asked.

“It took you long enough, sis.” Her only sister, Tawana pushed her oversized sunglasses into her hair, a mass of big loopy curls. “I’ve been sitting here for over half an hour.”

Aerial gave her a big smile. “If you’d come at six like I told you, when my shift starts, instead of 5:30, when my shift doesn’t start, you wouldn’t have been sitting her like two African statuettes.”

Her cousin, Chloe, laughed—loud, like a sonic boom. Several surrounding people cast them curious and furious glances. Aerial ignored them. Tawana chuckled too, unfolding her arms and setting aside the menu.

Chloe grinned as she read the menu choices. “That
does
sound good. Bring me one too.”

Chloe held up two fingers indicating she wanted one too.

Aerial nodded and headed back to the kitchen. The Tate Street Café had expanded its menu to include seasonal fair and more entrée items. Seriously, the bakery section took up most of the leased space, but at six in the evening, the baker, Freddy, had gone home. If they ran out of pot pies, well, they ran out. But that seemed unlikely since more folks came for the pastries and the coffee.

Augustine picked two out of the commercial refrigerator and slipped them into the oven. Latin music filled the kitchen and Aerial danced a bit to the upbeat rhythm.

“There you go! Shake those hips!” Augustine said. She lifted her arms and danced too.

Laughing, Aerial exited the kitchen. Clearly, Augustine had missed Antonio’s attempt to dismiss her full figured frame. She liked Augustine because the woman simple didn’t have a bad day. They shared that personality trait. When life gave lemons, Aerial just poured sugar on them and served them with southern sweet tea. Still humming the catchy tune, she went to the u-shaped counter. Nudging by Shelia, she took two cups and filled them with blackberry tea. More than aware of Antonio’s eyes on her, she shimmed a little bit, careful not to spill her sister’s and her cousin’s drinks, and walked over to their table.

“Aerial…”Antonio warned, but it still held a hint of heat underneath.

Ignoring him, she kept walking. Antonio could kiss all of her deep dark-chocolate ass. There wasn’t a thing wrong with being thicker.

She set the drinks on the table.

“Who’s that fine man you keep brushing off?” Tawana asked, turning around in her seat. Her back was to the door and the ordering counter.

“Fine nothing. He’s got hairy hands and too much facial hair,” Aerial said with a shake of her head. Chloe snickered.

Chloe rolled her eyes and held out her hand. “I need a straw, Munchkin.”

Aerial shrugged at Chloe’s childhood nickname for her. “Munchkin is now several inches taller than you. I must outweigh you too.”

Chloe laughed. “Too true. Too true.”

Aerial slapped the straw into her open palm. Not that it did much. Straws didn’t slap very well. She handed one to Tawana, but her sister ignored it, distracted by a new customer who’d just walked in.

Aerial followed her sister’s open-mouth gaze to a man carrying an electronic tablet. People shuffled out of his way as he walked, and when he passed, women stared—like her sister was doing.

“If you leave your mouth open like that for much longer, you’ll catch flies,” Chloe said casually.

“It isn’t summer yet,” Tawana snapped in reply. She straightened up in her seat. “Besides, that right there is the best salesman at C.A.K.E.”

But Chloe rarely cared about anything that happened at her cousin’s job. If it didn’t involve the law, most often, she didn’t subscribe or entertain it. Aerial, on the other hand, did. She peered across the crowded café to the rear corner, almost the last table before the restrooms. Nestled there, the tall blond sat, laid down his tablet, and picked up one of the folded menus. Uninterested in the people watching him, he appeared to read the selections. The table full of women to his right couldn’t stop whispering and giggling, but he seemed to not notice or care.

“So, he doesn’t normally go where real people go, like cafes and restaurants,” Tawana answered.

With his golden blond hair and sun-kissed skin, the man looked like he’d just returned from vacationing in some Caribbean resort, or skiing in Vail. He wore a white dress shirt and ebony dress pants. His suit jacket had been tossed over the empty chair beside him. Fit with nice, lean muscles, he obviously worked out, but probably something like jogging or biking. Aerial had to admit, the man was fine. He looked strong enough to support her when she climbed onto that delicious looking body and rode him hard and fast…

“Now you need to stop staring before you burn a hole in him,” Tawana said, her bemused tone poking Aerial out of her musings.

Aerial blinked. Where had that lusty thought come from? Shaking her head, she cleared her throat. Chloe snickered again, but didn’t say anything.

The Confessions of Henry Hooter the Third by Gabriel Rosenstock
La madre by Máximo Gorki
The Cross (Alliance Book 2) by Inna Hardison
Have to Have It by Melody Mayer
Forsaken (The Djinn Wars Book 5) by Christine Pope
Jax (The Protectors Series) Book #8 by Teresa Gabelman
Bride Games: (Alien's Bride) by Yamila Abraham
The Deal (Trading Hearts #3) by Saskia Walker
Rosemary for the Holidays (Consulting Magic) by Amy Crook
Queen In Play (The Manhattan Tales Book 2) by Thorne, Willa