Read Surrender to the Earl Online

Surrender to the Earl 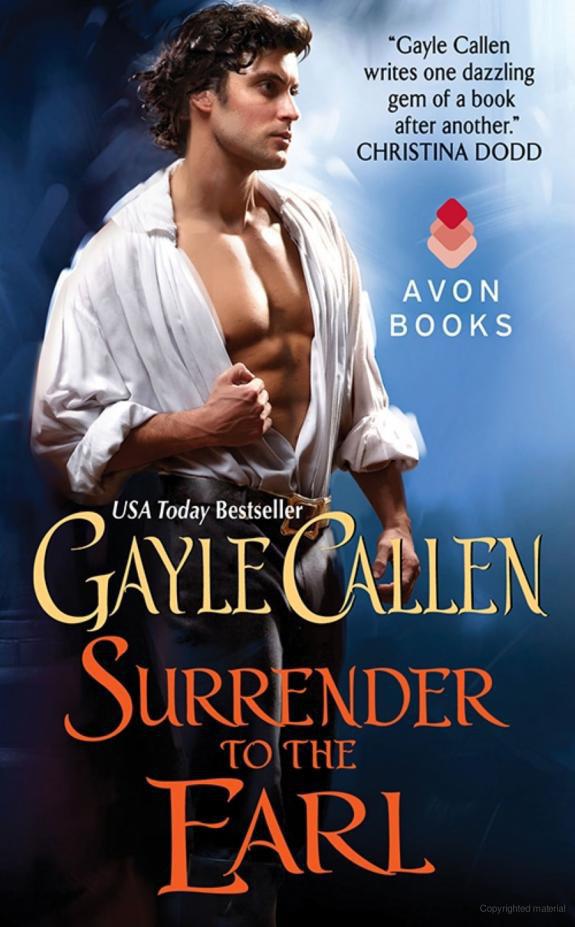 Surrender to the Earl

To Molly Herwood, fellow Purple, dear friend. I can’t think of this book without remembering the laughter and ah-ha moments of our brainstorming sessions. Thanks so much for your time, your creative brain, and for showing me that perseverance and love of the craft are crucial to a writer’s happiness.

R
obert Henslow, Earl of Knightsbridge, late of the Queen’s army, paced the drawing room in Lord Collins’s modest country mansion and debated how best to see to the welfare of the baron’s daughter—considering he’d never met her before. Robert had spent the six-week journey home from India pondering this dilemma, but he was no closer to an answer. He hoped he wouldn’t have to tell her the real reason: a military decision he’d help make had cost the life of her husband, Martin Blake. The guilt would never leave him, but at least the nightmares had ceased in the last year.

Blake hadn’t been the only man to die. Two others in their regiment had met a bloody end, including their commander, leaving Robert and two of his good friends to feel the need to make amends. He had made Mrs. Blake a widow, and he didn’t know how to make that right.

Robert was staring broodingly at the rolling grass fields of the park and the gold- and red-tipped trees when he heard the first chords from a piano in a nearby room. The sound grew into a merry melody, reminding him of a springtime awakening during this blustery autumn day.

And still Lord Collins did not come.

Robert decided to investigate the next room. It only briefly occurred to him that it might be impolite, but he was an earl, and his father had bred into him the loftiness of his title. It hadn’t taken the army long to beat the worst arrogance out of him, but he still had his moments. So he went back out to the entrance hall and peered through the next doorway into a small parlor. A young woman sat alone at the piano, her eyes closed, her face luminous as she enjoyed her music. Her light brown hair was caught simply at the back of her head, and it gave a faint sheen in the shaft of sunlight streaming through the window. She looked neither tall nor short, a perfectly average figure clothed in a dark blue day dress with a bit of lace above the bodice. Her face held him, with its pixieish pointed chin, slanting eyebrows, and the hollows beneath her cheekbones that made her striking rather than truly beautiful.

And then she started to sing, her voice angelic, her expression distant, as if her music took her away from her life, from the pain of loss.

He took a step into the room, and she suddenly stopped, although not even a floorboard had creaked.

She tilted her head at an angle, her face turning toward the doorway, her gaze off to the side. “Is someone there?”

She was blind. This couldn’t be Mrs. Blake. Surely her husband would have said something during the six months they’d served together. It must be a sister, he told himself. But his stomach was clenched tight, and he had an instinct for the truth, after all his years with the army.

“Forgive me for intruding,” he said, then cleared the roughness from his throat. “I am Knightsbridge, come to visit Lord Collins and Mrs. Blake.”

Her face smoothed into a polite expression. “The Earl of Knightsbridge? Mr. Blake’s fellow officer?”

“My husband was not given much to letter writing,” she said candidly, “but I heard your name more than once.”

Heard. Of course, the letters would have been read to her. Mrs. Blake was blind, and from the perfection of her features, it was not a recent injury. Had she been born that way? He found himself powerfully curious to know everything about her. She was a blinded invalid, who’d never have a normal life. And it certainly made him think differently of Blake, who’d seemed a shallow, though good-natured, man. To marry a blind woman, he must have had depths of compassion Robert had never seen.

Before they could exchange another word, an older man came up behind Robert and made a polite coughing sound. Robert stepped out of the doorway.

Lord Collins was a portly man, with long, gray, muttonchop sideburns and a red face. Without responding to his daughter, he eyed Robert with interest and said, “Knightsbridge?”

Robert gave a brief bow. “We have not met, sir, but it is a pleasure.”

“Come in, sit down,” the man said heartily.

Robert had heard this unctuous tone of voice before. Mrs. Blake smoothly slid off the piano bench and crossed the room. She didn’t use a cane, only allowed her hand to gently slide along the back of a chair as if to navigate. She pulled the bell cord hung in the corner, then glided with unerring accuracy back to a small sofa across from him. He almost warned her about the low table between them, but she obviously knew it was there. Her father didn’t seem to notice her movements at all.

Mrs. Blake shook her head. “Edwin is shooting this afternoon, and Blythe is visiting a friend in the village.”

Lord Collins grimaced. He probably wanted both of his daughters to meet an earl—or maybe just the sighted one, Robert speculated.

A young footman dressed in dark livery entered the room and bowed.

It was obvious she knew the workings of the household, and controlled the servants as the mistress of the home. Robert was impressed.

Lord Collins turned a speculative glance on him. “To what do we owe this visit, Knightsbridge?”

“As I mentioned to your daughter, I served in India with Mr. Blake. I know two years have passed since his death, but I’ve only just returned to England permanently, and I thought I would pay my respects and condolences.”

“You sold your commission?” Lord Collins asked, without acknowledging his daughter’s loss.

“Yes. I’m home for good.” Home. And he’d never felt so useless, for the entire estate ran smoothly without him. He’d wanted a steward to make that happen all those years ago when he’d left—and the man had succeeded. But now . . . Robert was at loose ends, as if he were unnecessary. And since it was autumn, even Parliament was not in session for him to take his place in the House of Lords.

He was used to being in charge and living an exciting, dangerous life. Oh, he’d been invited to country house parties and shooting parties from the moment of his return, but he’d only been able to focus on meeting Mrs. Blake. He snuck a glance at her, as if she’d even notice. Though her eyes appeared normal, they were strangely blank, and she wasn’t quite looking at him. They were an unusual color, a light amber that seemed to shine from within dark lashes. One wanted to focus on their beauty, which only made it even more apparent that they were so very different in
every
way.

“Thank you for your kind condolences, my lord,” she said with quiet dignity. “You were in the same regiment as my husband?”

“He joined us because so many from our parish were in the Eighth Dragoon Guards.”

A maid pushed a teacart through the open door, and Mrs. Blake rose. Robert watched, astonished, as she poured the cup herself, noticing that she left one finger just inside the rim. She didn’t need to actually touch the tea, since she must have felt the rising heat.

“How do you take your tea, Lord Knightsbridge?” she asked.

She held the cup and saucer toward him and he took it. She poured more for herself and her father, adding milk and sugar in the appropriate amounts. Her father took his almost without looking at her. She placed a little plate of iced cakes on the table, then sat down with her own tea.

Robert had thought such a woman would be an invalid, but he’d heard her play the piano, watched her move gracefully about the room and serve refreshments like any competent hostess. He admired her, yet he felt pity that she could never live a normal life.

“This may be an awkward question, my lord,” she began slowly, “but were you with my husband at the end?”

Memories swamped him of the dark jungle night, and the swarm of unexpected attackers. “Yes, ma’am, I was.”

“I do not believe so. The head wound was swiftly mortal.” Blake had died in his arms, and Robert had found the last letter from his wife that Blake hadn’t even had time to read. Robert had kept that letter for the next two years, reading several times the innocent, cheerful details of home and hearth.

She stared down into her tea—no, she didn’t stare, he amended to himself. But her head was bent, and he wondered at her emotions, though he could guess: grief and perhaps despair.

“I am glad he did not suffer,” she said at last.

Her father glanced at her almost impatiently. “Such sorrow is in the past,” he intoned. “No need to dwell, now that we are out of mourning.”

Mrs. Blake’s mouth tightened briefly, and Robert guessed she and her father had not reacted the same way to Blake’s death.

Lord Collins glanced out the window at the faint sound of harness jingling and the clop of horse hooves on the drive. A curricle, driven by a groom with a lady at his side, moved past the house and took the corner. “Ah, there is my youngest daughter,” he said with satisfaction. “She will be so pleased to meet you, Knightsbridge. I will hurry her along.” He rose and waddled from the room.

Mrs. Blake took another sip of her tea before giving Robert a fixed smile. “My sister came out several years ago, my lord.”

“And it must not be as successful as your father wished, considering the speed with which he departed.”

Her expression lightened, and her smile, though faint, eased his tongue.

“While we have a moment alone, Mrs. Blake, I would like you to know that, as your husband’s friend, I wish to be of service to you in some way. He saved my life once, and I was not able to save his. I owe a debt in his memory, and it would ease me to assist you.”

He expected her to downplay such an offer. After all, she was a blind widow who had a comfortable life with her family.

She slowly set down her cup, and for the first time he felt the intense focus of her interest, even though she was not looking directly at him. But those eyes were mesmerizing, and the line of her body grew slowly tense.

He set down his own cup and leaned toward her. “If I can grant it, I will.”

“I am trapped here,” she said, her voice impassive even though her words were startling. “I inherited my husband’s manor, but my father refuses to allow me to live there, though I am twenty-five years of age and have managed this household for many years. No one will go against him. But you can, my lord. Will you help me?”