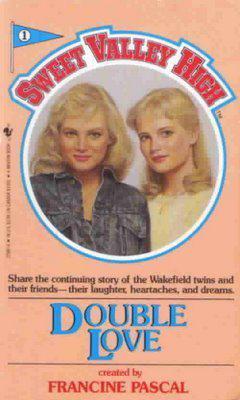 (From The Back Cover)

Will Jessica steal Todd from Elizabeth

Elizabeth and Jessica Wakefield are identical twins at Sweet Valley High. They're both popular, smart, and gorgeous, but that's where the similarity ends. Elizabeth is friendly, outgoing, and sincere--nothing like her twin. Snobbish and conniving, Jessica thinks the whole world revolves around her. Trouble is, most of the time it does. Jessica always gets what she wants--at school, with friends, and especially with boys.

This time, Jessica has set her sights on Todd Wilkins, the handsome star of the basketball team--the one boy Elizabeth really likes. Now it's a game of double love, with Todd as first prize. Elizabeth doesn't want to lose him, but what Jessica wants, Jessica usually gets... even if it ends up hurting her sister.

Meet the Wakefield twins, their guys, and the rest of the gang at Sweet Valley High

Elizabeth ran down the last flight of stairs, tore through the lobby, and rushed toward the big Romanesque clock that was the pride of Sweet Valley High.

Please, Todd, don't be angry with me for being late, she prayed silently. If only he wanted to ask her to the dance, it would be all right. She would forgive Jessica for everything.

At first she didn't see Todd. But then, as she came outside, there he was--walking across the lawn to the little red Spider and climbing in beside Jessica. Her own twin sister!

Sweet Valley High is a trademark of Francine Pascal

This book may not be reproduced in whole or in part, by mimeograph or any other means, without permission' For information address: Bantam Book, Inc.

Published Simultaneously in the United States and Canada

PRINTED IN THE UNITED STATES Of AMERICA

To Maria Guarnaschelli, with thanks

(This Page Is Blank.)

"Oh, Lizzie, do you believe how absolutely horrendous I look today!" Jessica Wakefield groaned as she stepped in front of her sister, Elizabeth, and stared at herself in the bedroom mirror. "I'm so gross! Just look at me. Everything is totally wrong. To begin with, I'm disgustingly fat. ..." With that, she spun around to show off a stunning figure without an extra ounce visible anywhere.

She moaned again, this time holding out one perfectly shaped bronze leg. "Isn't that the grossest? I swear I must have the skinniest legs in America. And the bumpiest knees. What am I going to do? How can I possibly go to school looking like this today? Today of all days!"

Jessica, stared at herself in the full-length mirror and saw a picture of utter heartbreak

and despair. But what was actually reflected in the glass was about the most adorable, most dazzling sixteen-year-old girl imaginable. Yet there was no stopping Jessica Wakefield when she was in this mood.

"Why couldn't I at least have had an oval face? It looks like someone stuck a pumpkin on top of my neck. And this hair--a dull yellow mess of split ends. I hate it!"

In a gesture of absolute hopelessness, she ran her hand under her silky blond hair, flipped it up, and watched as it drifted lightly back to her shoulders.

"Only thing duller are my eyes. Look at that color, Liz." She poked her face an inch from her sister's nose and fluttered long eyelashes over almond-shaped eyes the blue-green of the Caribbean. "They're so blah."

Without waiting for Elizabeth's response, Jessica reached again into her bag of sorrows. "I mean, there could be a telethon just for all the things that're wrong with me! I can't even look at myself another minute!" And with that she threw herself facedown on her sister's freshly made bed.

"Thanks a million," Elizabeth said in mock anger.

"I wasn't talking about you," came Jessica's pillow-muffled voice.

"Oh, no? All you said was that you're the

grossest-looking person in all of Sweet Valley. Your figure's terrible, your legs are chopsticks, your knees are bony, and on top of that, your face is all wrong. Right?"

"And I just happen to be your identical twin sister. So what does that make me--Miss America?" Elizabeth asked, deciding to take a good look in the mirror. If Jessica were such a hopeless case, she might be in trouble, too. But the image she saw reflected in the mirror was hardly cause for alarm.

Both girls had the same shoulder-length, sun- streaked blond hair, the same sparkling blue- green eyes, the same perfect skin. Even the tiny dimple in Elizabeth's left cheek was duplicated in her younger sister's--younger by four minutes. Both girls were five feet six on the button and generously blessed with spectacular, all-American good looks. Both wore exactly the same size clothes, but they refused to dress alike, except for the exquisite identical lavalieres they wore on gold chains around their necks. The lavalieres had been presents from their parents on their sixteenth birthday.

The only way you could tell them apart was by the tiny beauty mark on Elizabeth's right shoulder. Their friends might notice that Elizabeth wore a watch and that Jessica did not. Time was never a problem for Jessica. She

always felt that things didn't really start until she got there. And if she was late, let 'em wait. Otherwise, there was virtually no way to distinguish between the beautiful Wakefield twins. But beneath the skin, there was a world of difference. A wicked gleam of mischief lurked in the aquamarine depths of Jessica's eyes, while Elizabeth's reflected only sincerity.

When the phone in the hallway shrilled, Jessica leaped to answer it, assuming, of course, that it was for her.

"Jessica, of course! And who's this?" she demanded.

He wanted her sister! Jessica's eyes narrowed dangerously. One of the cutest boys at Sweet Valley High, and he was calling to talk to Elizabeth! Todd Wilkins was currently the basketball team's hottest star, and Jessica had been admiring him for some time now as she practiced her cheers in the gym alongside him. The idea that he would prefer Elizabeth to her infuriated Jessica, though she was extra careful to conceal this from him.

"Todd," she purred, "I should have known it was you just from your voice. I'm so glad you called. You know, I've been meaning to tell you--that was an absolutely fantastic drive shot

you made during practice today. I was really impressed."

"Uh, gee, Jessica--thanks." She could almost hear Todd blushing. "I didn't know you were watching."

"I always make it a point to watch the best players." And the best-looking players, she added silently. "You know, you could probably play professionally one of these days if you really wanted to, Todd." Jessica heaped on the flattery, hoping to distract him from the real purpose of his call.

But Todd hadn't forgotten. "That's really nice of you to say so, but it's probably too soon to tell." He paused. "Listen, Jessica, it's been nice talking to you, but is Liz around?"

Jessica frowned. "Uh, I think she's in the shower."

"I could wait," Todd said hopefully.

"Oh, you wouldn't want to do that. Liz stays in the shower practically forever."

"Maybe I should try calling back in a few minutes." His disappointment was evident.

"You could, but she probably won't be here. We've got to run, or we'll be late for school. This is the big day--they're announcing the Pi Beta pledges! Liz and I will just die if we don't get in!"

"I'm sure you won't have any trouble," said Todd. "But good luck anyway."

Jessica experienced a slight twinge of guilt about sidetracking Todd, but she quickly brushed it away, telling herself she really hadn't done any harm. It wasn't as if he were Elizabeth's boyfriend. She probably didn't even know he existed.

Jessica couldn't have been more mistaken. Just as she was hanging up, Elizabeth poked her head around the doorway. "Who was that?" she asked.

"Oh, just Todd Wilkins," Jessica replied, flashing her sister a brilliant smile to cover up the deception. "He called to wish me good luck with Pi Beta today. Wasn't that sweet of him?"

Elizabeth's heart sank, but she didn't let Jessica see her disappointment. She'd been hoping Todd would call her. The other day she'd caught him glancing at her in the cafeteria line. She'd turned around and there he was--tall, lean, his gorgeous brown eyes looking straight at her. She had quickly glanced down at her tray, a blush coloring her cheeks. Had Todd realized how much she liked him? He sat near her in Mr. Russo's science class, and though she'd never spoken to him, she'd always been aware of his compelling presence. In the cafeteria she had cast another glance over her shoulder. As their eyes met again, they both smiled. Elizabeth felt as if she'd been jolted by a thousand watts of electricity.

He was waiting for her after school that day. As she caught sight of him, leaning against the front railing, his sky-blue shirt open at the throat to reveal a glimpse of tanned, muscular chest, Elizabeth's pulse took off at a gallop. As he caught sight of her, a slow, shy smile spread across his features. He was nervous, too, she realized.

"Hey, Liz, I--I was wondering if you had today's chem assignment. I forgot to copy it down."

"Chemistry assignment?" Elizabeth couldn't tear her eyes off that blinding white smile. "Uh, sure, I think I have it somewhere. ..."

Frantically, she began juggling books, searching for the assignment she'd scribbled hastily on a sheet of loose-leaf paper.

"Are you always this organized?" Todd teased, his coffee-colored eyes dancing.

"Only when it comes to chemistry." She laughed, thinking of the special chemistry between Todd and her and hoping he wouldn't notice how nervous he made her.

She walked away from Todd that day, feeling as if she were floating two feet off the pavement.

Now, discovering that Todd had preferred Jessica all along, Elizabeth felt as if she'd been grounded by a five-hundred-pound weight. Not wanting to reveal her true feelings about Todd, she quickly changed the subject.

"Speaking of Pi Beta," she said, "have you decided what you're going to wear today?"

At noon the Wakefield twins would find out if they had made Pi Beta Alpha, "the positively best sorority at Sweet Valley High," according to Jessica. That meant "the snobbiest" in Elizabeth's book.

"Wear?" squealed Jessica, her thoughts immediately switching from Todd back to the subject of her hideous appearance. "I have nothing, absolutely nothing to wear."

"This sounds like a job for my new tuxedo shirt," Elizabeth offered. She'd thought about wearing it herself, hoping to impress Todd when she saw him, but suddenly it didn't seem to matter.

"Nothing will help." Jessica moaned.

Elizabeth shrugged. "Well, it was just a thought." She began collecting the books she'd need for school.

"But it's a beginning," Jessica said quickly. "Could I wear the pants, too?"

"And the little bow tie?"

"On one condition," Elizabeth said. "I want the whole outfit back, clean and hanging in my closet, by the weekend."

"Elizabeth Wakefield, you're the best!"