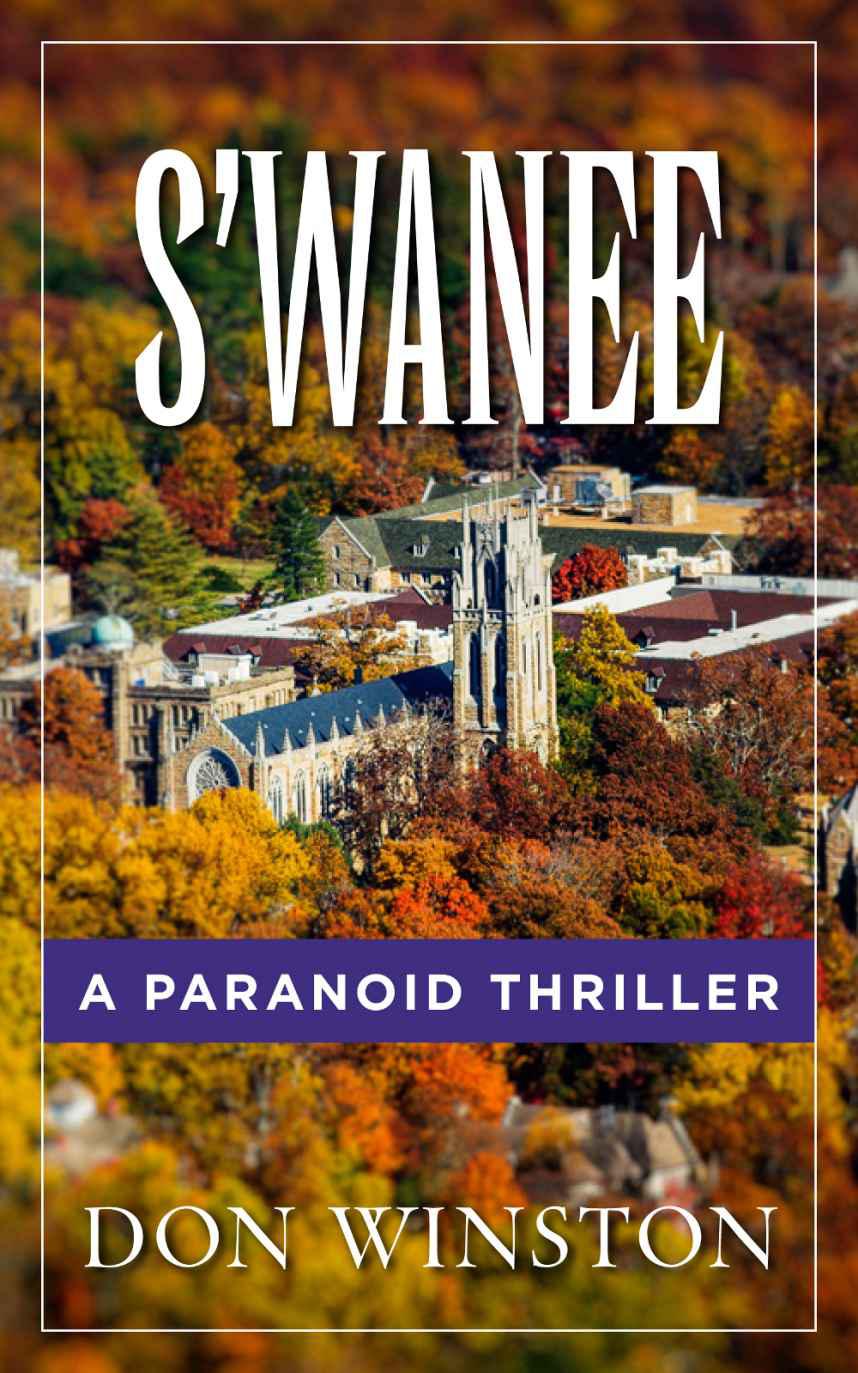 This is a work of fiction, and all names, characters, places, and incidents either are the products of the author’s imagination or are used fictitiously. Any resemblance to actual events or locales, organizations, or persons, living or dead, is entirely coincidental.

“S
’wanee” is the literary doppelganger of Sewanee, the University of the South, high in the Tennessee hills. Growing up in Nashville, I was vaguely aware of it as a child. As an adult, I paid a visit to “the Domain” not so long ago, and I can only suggest you add it to your list of places to see before you die. Perhaps you’ll understand why it has inspired so many poems and stories and loyalties, or why Teddy Roosevelt declared, “I believe in Sewanee with all my heart.” Or why Tennessee Williams, himself a passing visitor, bequeathed his literary estate to the school.

And perhaps you’ll understand why a realm this magical and spellbinding and perfect demands a doppelganger—an evil twin, if you will—just to keep the world in balance.

Although the following story is fictional, it is riddled with real-life places, histories, and happenings. I leave it to the reader to speculate which are which.

Like introduction letters from other colleges (Oberlin, University of Alabama, Pomona), this one arrived with a separate letter addressed to his parent or legal guardian.

But unlike the others, this one arrived very late. In June.

“That’s a slow school,” his mother Marcie barked, crushing out her just-got-home cigarette on their apartment’s balcony. Cody didn’t let her smoke in the apartment or in the white Toyota Camry they shared. Most days, when their work schedules synced, he drove them back from the Brunswick Square Mall in East Brunswick, New Jersey—Cody at the Apple Store and Marcie at Macy’s. After eight hours, she still looked immaculate in her white Clinique lab coat. She always looked immaculate. She was not yet forty.

Cody had graduated high school in May and had settled on Rutgers for a variety of reasons, mostly financial. It was cheap for New Jersey residents, they offered interest-free student loans, and he could live at home. He’d major in computer programming, schedule classes early in the day, and keep his job at the Genius Bar at the Apple store, evenings and weekends.

But mostly he couldn’t leave Marcie alone. In spite of living three years in this “temporary” city and “temporary” apartment, Marcie had few friends in East Brunswick and hadn’t had a steady boyfriend since the one who’d lured them here had drifted away. She’d met him in Palo Alto, California, where he was traveling on business. On the cosmetics floor at Macy’s, where she worked. Shortly after, Marcie got a transfer, packed up Cody and moved them east to New Jersey. She hadn’t stopped to think about whom he’d been shopping for on the cosmetics floor. Marcie rarely thought these things through.

That’s how they’d ended up in Palo Alto when Cody was nine and East Brunswick when he was fifteen. That’s why Cody couldn’t leave her alone.

Marcie liked meeting men “on business,” and she made a habit of it. “They have a job important enough to fly them around,” she explained when Cody was old enough to ask about his own father. “If they’re
happily
married, I steer clear. I’m not a monster. But men who buy perfume for their wives are not happily married. What an ignorant thing to buy a woman.”

She’d met Cody’s father on a plane from London to Sofia, when she was a flight attendant. “First class,” she always reminded Cody. “Where they put the youngest and prettiest.”

She’d transferred and followed him to Chicago on a temporary work visa. They never married, but she gave birth to Cody, all she needed to stay in the United States for good. She’d given him her last name. Soon after, she followed another man to Walnut Creek, outside Oakland, whom she was married to for three years. Cody vaguely recalled him.

After her divorce, she speared a boyfriend in Palo Alto, but they never married either. They got stranded in East Brunswick after the boyfriend she’d followed from the Palo Alto Macy’s—“the ONE,” Marcie initially claimed—had drifted away. “We’ll blow this joint soon,” she’d been telling Cody for two and a half years. But quality men didn’t travel to East Brunswick “on business,” and lacking a bead elsewhere, Marcie stayed in a restless holding pattern as Cody grew up through high school. And she neared forty.

Cody’s above-average SAT score surprised him, since he’d taken it raw. He couldn’t afford a prep course, and the practice tests in his school’s library were outdated and marked-up. Several colleges sent him letters and brochures, but none offered scholarships, except a potential-maybe tease from the University of Alabama, seeking geographical “diversity.” The others simply wanted his business. He didn’t respond to any of them.

He had dreamed of NYU and living in Manhattan, but without a scholarship it wasn’t doable. He didn’t let himself even dream of Princeton. His scores weren’t good enough, and he was “unaccomplished,” at least according to the free online survey his school counselor had recommended. Cody had settled on cheap and functional and close to Marcie’s apartment. It was only college, after all.

Rutgers was familiar, with its office park campus and satellite branches with thousands of students who seemed like his high school classmates—not surprising, since most of those who did go to college went there. But that wasn’t a lure, since Cody had few high school friends, thanks to his late start. Friendships were set by the time he’d arrived sophomore year.

Plus, he was more than a year younger than his classmates, having just turned seventeen in January. He’d always been the youngest in his class, and Marcie couldn’t remember why she’d started him early. “It didn’t seem early for you,” she said. “You were just very advanced, I guess.” It was typical of Marcie not to think about these things, or think they mattered much.

He was a better-than-average student and ran cross-country when he could and wrote two articles for the school paper his first year, but he didn’t buy a class ring or yearbook and didn’t keep up with anyone Facebook after graduation day.

His on-again, off-again girlfriend Kimberly had graduated the year before. Her parents were wealthy, and she went to Syracuse. She’d met someone else the first semester, which she informed Cody in a text. That bothered him for three long weeks, but he knew instinctively it was an unimportant pain that wouldn’t matter at all once he was older. Nothing bothered Cody for very long. He got that from his mother.

Unlike Cody, however, Marcie wore her resilience on her face. She constantly beamed a dazzling and joyful smile of gratitude. “I’m an immigrant!” was her gleeful excuse. “What’s the problem, kiddo?” she’d bellow whenever Cody would mope. “It’s all here for you. All of it!” How could anyone complain in a country where everything was possible? America was simply a wonder to a girl from Bulgaria.

But the American Dream took money. And Marcie had to look her best—and did. “A job requirement,” she’d explain in justification, loading the trunk with cheery shopping bags from all over the mall. That her Clinique lab coat uniform concealed the latest styles she claimed to “need” was conveniently lost on her, even as her closet grew ever more choked. “And it’s all on sale. Every day!” from the mall’s twenty-percent discount. They never discussed it, but Cody knew his mother was deeply in debt.

Cody paid almost half the rent from his wages and after the Rutgers deposit had close to four thousand dollars in his savings account. Marcie had saved nothing for her son’s college education. The thought had never occurred to her.

So Cody made his peace with Rutgers. It was a fine school, as Marcie said. He sent his deposit and circled classes and entered the lottery because the good lectures were overstuffed and picked randomly, and there was always a waiting list. He would live in his mother’s apartment and drive to class each morning and meet her in the mall for lunch and leave school at four and work till nine weekdays and Sundays till six. It would be like high school, but with more people around as he walked through the days. It would be over in four years.

And that’s when a letter arrived, blindly, from a place called S’wanee.

“Where is it again?
Tennessee?
” Marcie asked as she breezed into the apartment one night after work, sorting mail. The pay-attention-pink bills went facedown in the stack on the kitchen counter, the blue-envelope Valpak coupons landed on the dining room table for later clipping. Cody followed behind. Marcie’s mother/son dachshunds, Maisy and Max, ever desperate for attention, pinged about her legs like little clowns. “I see you, I see you,” she said to them.

“Isn’t Dolly Parton from Tennessee?” Marcie asked. “Did she go there?”

“I put the letter on the coffee table. Three days ago.”

Marcie picked it up. “Parent or legal guardian? Aren’t you legal yet?” she asked.

“Don’t worry about it,” Cody said, closing the subject.

“No, no, I’ll read it right now. You left it for me, it must be interesting to you. I just thought…we were done with this.”

She took the letter and leashes to the door. “Back back!” she ordered the pinging dogs so the opening door wouldn’t scrape their paws.

The brochure—“A Place Called S’wanee”—exploded with color. Marcie thumbed through it at the dining room table that night, as Cody had several times in the past three days. She stirred her Lean Cuisine but ate little. Food rarely passed her lips. She seemed to subsist entirely on cigarettes and Starbucks and pinot grigio over ice at night. Cody ate a regular Stouffer’s lasagna.

Saving All My Lovin' by Donna Hill
Coral-600 by Roxy Mews
Sex or Suffer [Dark Colony 1] (Siren Publishing Ménage Amour) by Lara Santiago
Perfect by Viola Grace
IronStar by Hallman, Grant
I Was Dora Suarez by Derek Raymond
Tigerman by Nick Harkaway
The Revenge of the Elves by Gary Alan Wassner
The Way of the Blade by Stuart Jaffe
The Martian Falcon (Lovecraft & Fort) by Alan K Baker