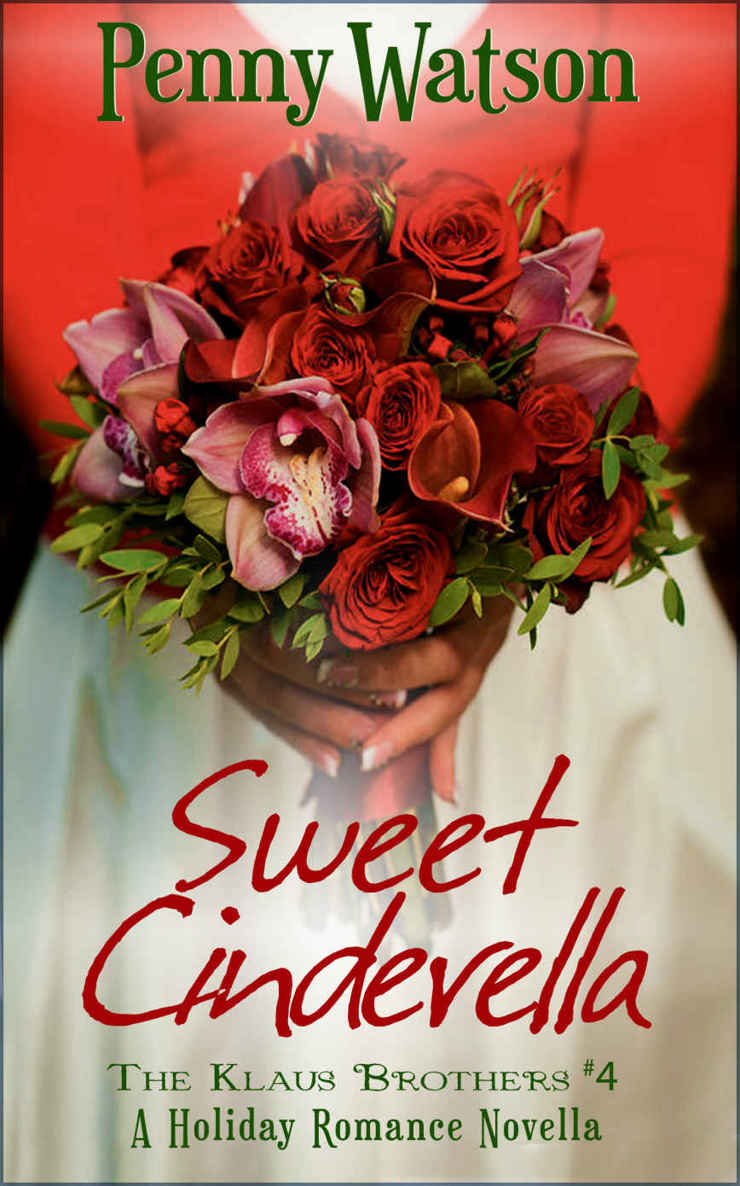 Other Works by Penny Watson

All rights reserved. Except for the use in any review, the reproduction or utilization of this work in whole or in any form by any electronic, mechanical or other means is forbidden without the express permission of the author.

This is a work of fiction. Names, characters, places and incidents are either the product of the author’s imagination or are used fictitiously, and any resemblance to actual persons, living or dead, business establishments, events or locales is entirely coincidental.

A Quick Note from Penny Watson

This is the fourth installment of The Klaus Brothers, a fantasy romance series based in the North Pole (and a few other locations). SWEET CINDERELLA is a novella that takes place at the same time as SWEET ADVENTURE.

For those of you not familiar with this world, I have provided a
handy-dandy cheat sheet
and
glossary of terms
.

Gregor Alric Klaus, fourth son of Nicholas and Alena Klaus, Director of Finance for Klaus Enterprises, knew what his colleagues whispered behind his back.

There was a reason he was a formidable opponent in the boardroom, and it wasn’t because he was a nice guy.

Gregor Klaus never lost the game. He played to win, every time.

Because of his financial expertise, Klaus Enterprises had established itself as a powerhouse in the industry. The company that produced handcrafted toys was unparalleled in quality and distribution. The company that brought so many children happiness owed its success to the most coldhearted brother in the Klaus family.

Even as a child, Gregor displayed an uncanny talent with numbers. While his brothers baked gingerbread and carved toys, he pored over the books with their elfin accountant, assessing each season, calculating ways to cut overhead, predicting trends. His father didn’t know quite what to do with him, so he set him up as Director of Finance and moved him to New York.

It was a perfect fit.

Gregor thrived in the urban environment. He loved the architecture, the cutting edge technology, the competition within the industry. He lived in a sparse apartment, adorned with a minimalist décor. He dressed in the height of fashion and enjoyed his gadgets. Even his dates—when he found time to squeeze in a social life—were elegant, tasteful.
Cold.
His brothers enjoyed an old-fashioned lifestyle in the North Pole, but Gregor had assimilated into the affluent world of Manhattan, a world away from
Pfefferkuchen
cookies and elfin Magik.

He lived for two things—his job and his family. Family loyalty was everything. He knew how much his parents and brothers depended on him. He was a rock in a sea of chaos. And how could Glasdorf—their town in the North Pole—be anything but chaotic? They lived within a magical ice wall, hidden from the rest of the Sudenwelt, with hundreds of elves. His brother Oskar did his best to control the unruly bunch, but it was a daily challenge. Between unpredictable spells and an unlimited supply of eggnog, the elves in Glasdorf were quite a handful.

All of their lives were currently mired in turmoil. Nicholas and Lucy had just welcomed their first baby into the family. Sven was secretly planning to open a furniture studio—and only Gregor knew the truth. Oskar and Kiana had adopted an elfin Bändiger and were building the North Pole’s first library. And his parents—Santa and Alena—had a full schedule packed with triathlons and philanthropic projects. Tonight was one such event, which his brother Wolfgang had been organizing for months. The New York Children’s Literacy gala promised to be a huge success, thanks to Gregor’s financial support and Wolf’s attention to detail.

Gregor wove through the crowds on Fifth Avenue, dodging shoppers and Salvation Army buckets. Bitter winds tugged at his coat and reddened his cheeks. He stopped and glanced at a window display. A fat Santa smiled at him and waved, its robotic arm twitching with Christmas cheer.

It stood to reason that the Klaus family had some natural holiday generosity in their DNA. His father was filled with compassion, his mother was sympathetic to children all over the world, his brothers poured their hearts and souls into the toys and sweet treats and acts of philanthropy and caretaking of the elves.

Emotional, kind, and thoughtful—those were traits appropriate for the Klaus family. Those were traits nestled firmly in the genetic code of his parents and siblings. In some ironic twist of fate, those characteristics had skipped right over him. Nothing about Gregor Klaus was warm or cuddly.

He was the polar opposite of Santa Claus in every way.

He’d promised to meet his family at the affair. He needed this walk first, striding along the icy Manhattan sidewalks. He did this every day. The bracing wind reminded him he was still alive, not a robot but a man. He kept hoping that immersing himself in a sea of humanity would help him to find his own humanity.

His family hadn’t noticed that anything was wrong. They were distracted by life’s adventures, and none of them knew what Gregor hid behind his impeccable clothes, well-trimmed goatee, and self-confident expression. That now, in addition to ice cold, he felt numb. He peered into the frosted holiday windows on Fifth Avenue and felt absolutely . . .
nothing.

Yes, it certainly was ironic.

Santa’s son was a cold, hard bastard with nary an ounce of Christmas cheer anywhere to be found.

Her five-year-old son blinked at her. “Why are you so fancy tonight?”

Hannah glanced down at her gown. For the first time in a year, she was dressed for a special occasion. Her heart raced with excitement. She felt like Cinderella getting ready for the ball. “I’m going out with my sister. To a formal gala.”

Anthony’s twin, Matteo, bounced into the room waving a dime-store tiara. “Here it is! I found it!”

“A princess crown. Granny gave it to Mom for Christmas last year. She has to wear it tonight.” Matteo slumped against the sofa, trying to catch his breath. “Mom, don’t forget this.”

Hannah’s heart lurched. The tiara was a sweet gesture from her mother. A crown for her princess.

If princesses were thirty-year-old single moms who lived in Hell’s Kitchen.

“Thank you, sweetheart. I won’t forget.” She took the plastic toy from her son and kissed him on the forehead. “You two boys need to be well-behaved tonight for the babysitter. Promise?”

The twins offered her blank stares.

Hannah held out her pinky.

Both boys shrugged and held out their pinkies for a solemn promise.

“We promise to be well-behaved.”

“Thank you. Auntie Andi and I are heading to the New York Public Library for a fund-raiser. I shouldn’t be too late.”

“Is Auntie Andi going to be dressed up like you? I can’t imagine her being all . . . girlie.” Matteo giggled.

“Yeah. Andi’s not that girlie. She wouldn’t wear a tiara,” Anthony said.

“A bum?” Anthony finished her sentence with a smirk.

Hannah pursed her lips. “Not. Nice. Auntie Andi works hard for a living, and being glamorous is not part of her job.”

“What are you guys doing at this thing?”

“Dancing! Who would you be dancing with?” Anthony tugged on his mother’s dress and shot her an accusing look.

“I don’t know. It’s just a possibility. Anything could happen tonight.”

Well,
something
. Something different. Something that didn’t include scouring pots after dinner, picking up dirty socks, or correcting term papers. Anything was a welcome diversion from the mundane details of her life. Not that she would miss a moment with her boys. They were a gift, truly. But the past year had been brutal. David had finally succumbed to his battle with cancer. They lost their home after an error with the insurance. Hannah was juggling a stay-at-home job, the twins, her disabled parents, and her autistic uncle. There were days—many days—when the idea of escaping for a bit was tempting. Andi’s push for this celebration was just what she needed.

Thanks to a favor from one of David’s colleagues, Hannah had secured two tickets for the gala and a limo for transportation. Klaus Enterprises was sponsoring the event to raise money for the New York Children’s Literacy Program. Andi insisted she was working on a free-lance article about the charity. Hannah hoped that was true. Her sister—a tabloid reporter for
The Scoop
—had initially believed the Klaus family was hiding a huge secret. Nothing got her sister more excited than the prospect of uncovering dastardly deeds. But Andi had promised she’d dropped the Klaus investigation and tonight was just for fun.

A World Divided by Marion Zimmer Bradley
The Big Short: Inside the Doomsday Machine by Michael Lewis
Sociopath by Victor Methos
Rugged by Tatiana March
Dark Space: Avilon by Jasper T. Scott
Elixxir (The Brethren Series) by Remiel, Deena
Final Challenge by Cooper, Al
This Town by Mark Leibovich
Outbreak The Living (The Outbreak Series) by Kristal, Deausha
Chance and the Butterfly by Maggie De Vries