The Time Portal 2: Escape in Time 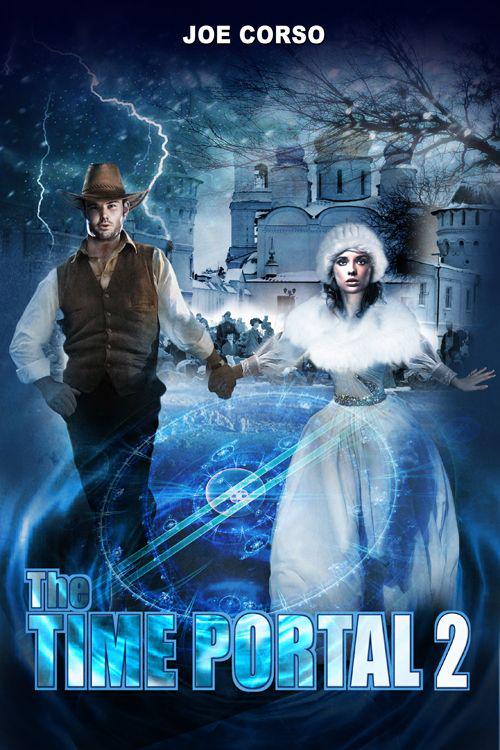 The Old Man and the King

The Revenge of John W

The Adventures of the Lone Jack Kid

This novel is a work of fiction. Names, characters, places and incidents are either the product of the author’s imagination, or, if real, used fictitiously. No part of this book may be reproduced or transmitted in any form or by any electronic or mechanical means, including photocopying, recording, or by any information storage and retrieval systemwithout the prior written permission of the author or publisher, except where permitted by law or by a reviewer who may quote brief passages in a review to be printed in a newspaper, magazine or journal.

Lubyanka Square is often first on a tourist’s list. It’s hard to miss the massive structures in downtown Moscow that formerly housed the KGB. What originally began as the site of the All-Russia Insurance Company eventually morphed into the most prominent address in all of Russia. At one time or another, various KGB directors, from Lavrentiya Beriya to Yuri Andropov, had occupied offices on the third floor of the grand dame. A statue of Felix Dzerzhinsky, founder of the first communist secret police, the Cheka, known for their signature style execution method – a shot to the back of the neck that left very little blood – is no longer there.

The main yellow building of the Lubyanka is the one most often seen, the one taken over by the Bolsheviks in the 1900s. Inside the building, situated firmly in the middle of its courtyard, was the prior site of the Lubyanka Internal Prison, famous for its basement inmate torture and interrogation. Automobile engines revved to drown out the noise of prisoners being shot. The structure now serves as the headquarters for the Border Troops and its Federal Security Service (FSB) Directorate. This building is a dull, lifeless gray building, No. 1/3. Its construction began under Andropov and was completed under Chebrikov. Nowadays, the buildings also house a KGB Museum, open to the public. This was the result of KGB chief and chairman of the Communist Party, Yuri Andropov, and his desire to improve the KGB's image. The ground floors are used for conferences and a clubroom for retired KGB officers. It features, among other things, a disco, and since the Soviet collapse in 1991, Russia's intelligence agencies have given guided tours through the yellow Lubyanka in an attempt to create an impression of openness. Across the square is
Dyetski Mir
or “Children’s World,” the largest children’s shop in the country.

For almost twenty years, Vladimir Putin served as a KGB Lieutenant Colonel. As the President of Russia today, members of the FSB now report to him.

Oleg Karpov, Head of Security for the KGB, read the report on his desk for the third time. He still had trouble believing it. He wondered if the Americans were purposely trying to goad him into reacting to this nonsense. He didn’t think so, but no matter, he would have to present this information to President Vladimir Putin and let him decide whether this information was important enough to warrant action or if perhaps this might be a carefully designed ploy to create frustration and confusion.

Each morning, problems in the form of files in folders with different names on them were placed on his desk. Karpov was the one who made the difficult decisions – how best to handle these problems. If one supposedly innocuous threat to national security fell through, it was his hide on the line. Granted, an issue such as this one only manifested itself maybe once in a chief’s career. He smiled as he imagined the expression on Putin’s face as he opened the file and read it. Karpov experienced a modicum of satisfaction knowing that this was one of the few times he could justify passing the file, and therefore the problem, to a higher up; that higher up being only one of two, or two of two men. What awesome power he held in his hands. That thought brought about another smile as he picked up his phone and pressed the button linking him to the President’s secretary.

Lucky couldn’t wait to test out his new executive jet aircraft. He decided how better to do so than by taking the gang – Samantha, his ex-girlfriend; Mickey, his CIA colleague and childhood friend; Nicky, a friend Dukie, Casey, Sal, and Jimmy Lamb, to Monte Carlo for . . . a cup of coffee. The “cup of coffee” was his euphemism for vacation. The coffee break was now nearing its third week of days of lounging on the edge of the clean, white sands of man-made Larvotto beach. The sun’s warmth, as well as that from the voluminous intake of beach served exotic drinks, was intoxicating. They figured out the trick. By submerging their knees and allowing the ocean water to splash about their skin, it almost neutralized the heat.

Lucky sat transfixed as he watched the sun’s rays pierce through the topaz sky. Bouncing off the undulating rivulets of water was a kaleidoscope of color, glittering like thousands of sparkling stars. No matter how many times he looked into the clear ocean water, he still marveled at the curious multi-colored fish swimming, unafraid, around and around his body, right through his legs. It was hard to tear away from the beauty of it all, but hunger pangs told him that it was now time for lunch.

Lucky and friends had frequented a number of lunch eateries, but they always ended up at "The Yellow Bar" or
Spiaggia
, located at the far end of the beach. It became their go-to place. Today was no different. Nothing could beat it, and besides, the little bit of exercise to walk there made him feel somewhat better in light of the number of calories that each drink held.

Eventually, the sun abandoned them, opting to descend, having fulfilled its duty for the day, and the group gathered up their beach belongings and began the slow walk up the sand toward the Monte Carlo Sporting Club, to their cars, to initiate the short drive back to their hotel – the luxurious SBM Monte Carlo Beach Club. It was Saturday night, a big night in Monte Carlo, but Lucky had instructed Bobby Boots, his personal pilot, to prepare the jet for an early morning takeoff, so the gang opted to quickly shower and meet in the hotel dining room for dinner only. It was a wonderful evening as they recounted their many stories from their recent travels with Lucky; Lucky their generous friend who loved life and loved adventure. With their appetites now sated with outstanding French cuisine and the best that the local vineyards had to offer, the group turned in early.

Bobby Boots and his co-pilot buddy, Tommy Sheridan, completed their preflight inspections and were cleared for takeoff. Methodically, he inched the throttles forward until they unleashed the full power of the sleek jet’s engines. The plane shot down the runway, gaining speed with every foot of forward momentum. Bobby gingerly coaxed the plane skyward into a smooth, upward arc and onto its designated path. Once in the air, and after the aircraft had reached its proper altitude, Lucky abruptly instructed Bobby to change the flight plan to Rome, and just like that . . . it was done, on a whim. He wanted to see Italy.

Things had changed for Lucky and “life is meant to be lived” was now his philosophy. His reasoning was simple: Lucky’s former boss had attempted to kill him by booby-trapping the building that was the scene of one of Lucky’s CIA agent assignments. What Lucky endured after being blasted out of that sixth story window was almost unfathomable. Rows and rows of clotheslines, filled with laundry, had saved his life by breaking his fall, but the blow to his brain had left him teetering between life and death for quite some time. Skilled specialists worked for hours connecting veins and arteries and reattaching his severed cranium. Unlike Humpty Dumpty, he was indeed “put back together again.” The doctors, aware that this kind of brain trauma could cause blindness, coma, and irreversible motor senses damage, had no idea what to expect. But Lucky was “lucky.” He beat the odds. He awoke. He was coherent. He could walk. He could talk. He was . . . a living miracle. His memory was completely intact, but it was his sight. His sight was affected. He saw things – things that other people could not see. There were these life forces of energy, suspended mostly in fields, surrounding objects, but with no apparent energy source. Lucky had no explanation for them. They were curious indeed. Upon closer examination, he discovered that what he saw was actually two energy fields, one behind the other. When Lucky walked directly through the two fields, nothing unusual happened. But when he tried walking
between
the fields, to his amazement, he found he could enter something and be transported to another time – times such as twelfth century England and Roman gladiator days, where he witnessed men fighting each other to their deaths. He called his discovery a “time portal” and learned through trial and error that one time portal led to another. As a result, Lucky had already seen the
ancient
Roman Coliseum, but on this day, he wanted to see it in its
modern day
form and Lucky’s friends, well, they were all too happy to accompany him on this little detour. They were along for the ride.

The Preschooler’s Busy Book by Trish Kuffner
Twisted (Delirium #1) by Cara Carnes
Tahoe Blues by Lane, Aubree
Not a Marrying Man by Miranda Lee
Sookie and The Snow Chicken by Aspinall, Margaret
Getting Over Mr. Right by Chrissie Manby
Devil Disguised by Howard, Karolyn
No Turning Back by HelenKay Dimon
Things I Know About Love by Kate le Vann
And We Go On by Will R. Bird