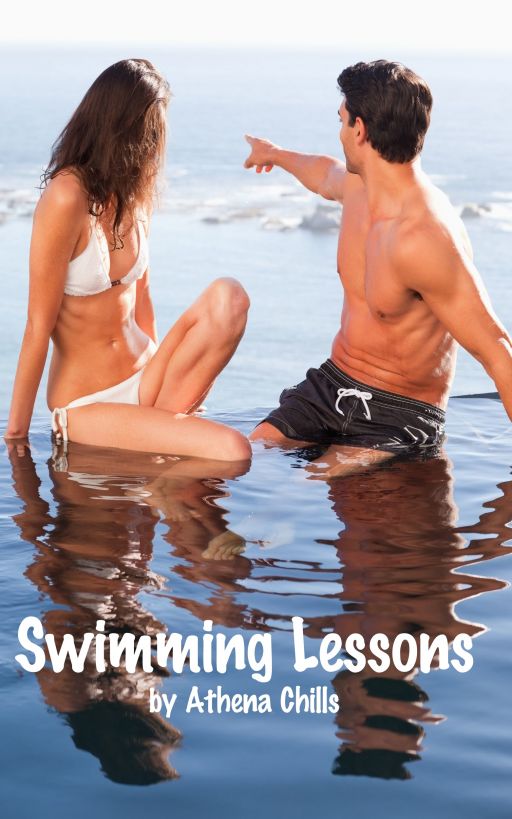 To Kevin, who is hotter
than any fiction

Sam stepped onto the beach
from the sidewalk that ran from the parking lot. It was an early
Friday in June and the place would be swarming with kids and
families on vacation soon. For the moment, however, he was alone on
the beach. He tiptoed carefully across the already-warming sand,
cautious not to step on any of the jagged shells.

He admired the beauty of
the beach this morning. He took a deep whiff of the salty air and
closed his eyes. Some days the air was full of the smell of decayed
things, but today, everything smelled clean. He opened his eyes and
continued his walk toward the guard station. He scanned the waves,
paying close attention to the height of the breakers. The tide was
coming in, not that it mattered on this stretch of beach. The waves
themselves were unusually calm today. Sam sighed; it was going to
be an easy day.

Coming to the base of his guard station, Sam
fished in his pocket for the padlock key. He climbed the steps up
to the door and unlocked it. He hung the padlock and the key on a
nail inside the shady refuge.

He opened the cover that
shut up the tower at night, giving him a full view of the
coastline. He pulled a pair of binoculars down from a shelf and
made a quick sweep of his section of the beach. There was nothing
dangerous or particularly interesting out there today. It was just
a matter of waiting for the inevitable crowds.

He put the binoculars down
and set up his folding chair. He sat back on the chair, propping
his feet up in the window. He rested there for the next half hour
as several families arrived on the scene, carrying blankets,
coolers, umbrellas, and all manner of beach toys. There was a group
of four teenage boys, all carrying body boards. Sam shook his head,
as he already knew how that was going to work out. The waves were
too calm for body boarding, at least too calm for his
tastes.

About a half an hour after
he had arrived, a group of four college-aged girls walked past his
tower. He heard one say conspiratorially, "he's pretty cute," as
they walked past. Sam smiled. Most days, he could have his pick of
the girls and young women who spent their days here enjoying the
sun. Right now though, he was content to sit back in his chair and
scan the beach and waves.

The group of boys had
their body boards out, but they were quickly finding that the waves
weren't strong enough to push them anywhere. Instead, they were
trying to splash each other by smacking their boards into the
waves. Occasionally, one would jump on another and dunk him. Sam
didn’t care, so long as they didn’t get carried away.

The group of girls were mostly just standing
there in the waves, squealing like children when the little
foot-high waves broke against their butts or backs. Some of them
were walking out slowly, seeing how far they could get and still
touch bottom. The girls were in water up to their chins now, so Sam
figured they would come back in soon.

A family with two very
young children had just set up their base right below Sam's
station. One of the children wanted to run off into the waves, but
was instead scooped up by the mother and placed into a playpen.
"Who brings a playpen to the beach?" Thought Sam to himself.
Apparently the child had similar thinking, because it immediately
started crying uncontrollably.

The boys with the body
boards had come in and set their boards in a pile. Now they seemed
to be digging for something. With no one else in the water, he was
able to focus on the four girls.

The girls who had been up
to their necks had found a sandbar and had climbed up on top of it,
since now it appeared the water only reached their waist. Some of
them continued out into deeper water, while one girl remained
behind on the sandbar. The other girls paddled around in the
very-calm deep water for a couple of minutes, then they returned to
the sandbar. All of them started heading back to the
shore.

Except for the one girl who hadn't gone off
the sandbar. She had tried to come back with the other girls, but
couldn't find a shallow path back in. The incoming tide had made
the calm water deeper than it was when she'd gone out, and now
there was no way to walk back in.

Sam knew where this was
headed; he’d dealt with this before. He grabbed his flotation
device and started walking in her general direction. He'd have to
swim out and tow her back in, no big deal. The water would probably
feel pretty good by now. He waved to her to signal that he was
coming, and that she shouldn't panic.

She didn't see him. She
was up to her chin with her head back, desperately trying to walk
in. She took one slow, exploratory step at a time, each time going
lower in the water. She understood that the tide was coming in, and
if she didn't hurry, this was going to get worse. She took another
step forward.

The other girls saw Sam
approaching them and started calling out flirtatiously, not even
noticing their friend behind them was in trouble. Sam was almost to
the water's edge when he saw her go under. Then he broke into a
run. She was easy to spot, as her head was still breaking the
surface occasionally. She was panicking, but still managed to jump
up and down, catching enough breath each time. She must have
misjudged a breath, because he saw her come up and then go back
down without breathing: she was choking on the water.

He reached her quickly.
She couldn’t have been in real trouble for more than a half a
minute. He pushed the life preserver toward her, and she grabbed it
instantly. He started swimming back in, but after a couple of
strokes, she let go of the floatation device and just lay there
face down in the water, unmoving.

He immediately went back for her, rolling
her on her back and pulling her in. It wasn't long before his feet
could touch bottom, and he carried her, running back to the dry
sand as quickly as he could through the waves.

He put her down and checked her breathing.
Nothing. He rolled her over and shook her, hoping she would cough
up water. He didn't think she'd actually inhaled much water, just
enough to choke on to the point of passing out. He was right. She
twitched and shook her head, and a mouthful of water came out. She
twisted and pushed herself to her knees, retching and gagging. She
was also breathing, so Sam knew she'd be OK now.

Her friends were
surrounding her now, patting her back, bringing her towels, and
generally fawning and doting all over her. Two of them were
apologizing for not helping or not noticing. Sam couldn't fault
them; he'd seen this plenty of times. It was so easy to miss a
drowning, since the victim rarely gets a chance to yell for help.
He helped the girl to her feet. "What's your name?" He
asked.

She looked at him with thankfulness and
relief. "I'm Jean. Jean Young. Who are you?"

"Sam. Sam Peters. Are you
feeling OK?" He still had her by the arm, making sure she could
walk without falling. She was starting to get some color back, and
he really did think she'd be fine, "You should probably still go to
the hospital and get checked out. You were unconscious, and you
could possibly have inhaled or swallowed something."

Jean didn't argue. One of her friends took
her arm and started leading her away from Sam, toward the parking
lot. Sam made sure they all heard his advice about getting checked
out, and watched them leave. He walked back to his tower and
started filling out the rescue report.

The rest of the morning
and afternoon were mostly uneventful, which was the way Sam
preferred it. Later that afternoon, after he had finished taping up
a child's cut foot, he returned to his tower to find Jean
there.

She had gone to the hospital, gotten checked
over, and the doctor said she was fine. "Then I went home, got
cleaned up and dressed, and it came to me that I hadn't thanked
you, and that maybe you had paperwork for me to sign or something.
I sure don’t want you to get into trouble because of me.”

Sam smiled, "No trouble at
all, that's why I'm here. The paperwork is fine. I already
submitted it to my supervisor when he came through on his last
circuit. As far as thanking me, you weren't really in any condition
to talk then."

She smiled back at him. Sam had been too
busy that morning to properly pay attention to her, but he looked
at her now. She was wearing a tight striped t-shirt and very short
little cut-offs with white tennis shoes. She was about his age,
with long brown hair, and very pretty. He imagined she must have
had her hair tied back earlier, since he'd have noticed that
before.

“
One thing though,” he
hesitated, but continued, “You should probably stay out of water
that’s over your head if you can’t swim.”

She blushed. “I know. My friends were going
out, and I didn’t want to stay behind, so I went with them. I
wasn’t expecting to get stuck out there.”

“
No one expects accidents,
that’s why they’re…” he thought of the word he wanted,
“…accidental.” The more he looked at her, the more attracted to her
he became. He started to stammer when he spoke. “I could show you
how,” he added, much more quietly.

“
How to swim. It’s not
hard, and you only need to learn enough to be safe.” Was he
actually concerned about her safety, or did he just want to spend
more time with her? He thought he had her best interests in mind
when he started this topic, but now he wasn’t so sure.

“
I get off work at five
every weekend, or pretty much any time on Monday through
Thursday.”

“
How about tonight?” She
looked surprisingly eager.

Sam looked at the clock inside the tower. It
was 4:20 right now.

“
Are you sure you’re up to
it? You had a rough morning.”

“
I feel fine. I’d feel
better if I knew it couldn’t happen again.”

“
I have nothing else going
on tonight. Let me get things wrapped up and closed here at 5:00,
and we can get started.”

“
Cool, it’s a date then!”
She sounded excited. “I have some time before then, I was thinking
of grabbing some food. With my hospital visit, I haven’t eaten
since breakfast. Can I bring you something?”

Sam nodded, “Sure.
Whatever you’re having.” Had she said
date
?

She returned about twenty minutes later,
just as he started getting ready to close up his tower. She parked
out in the lot, and had a big bag of food, some drinks, and a bag
of clothes.

The Coach House by Florence Osmund
12 Rose Street by Gail Bowen
My Foot's in the Stirrup . . . My Pony Won't Stand (Code of the West) by Bly, Stephen
Third-Degree Burn [Southern Heat 3] by Alexa Aaby
Breaking Noah by Missy Johnson, Ashley Suzanne
The Memoirs of Mary Queen of Scots by Carolly Erickson
Clade by Mark Budz
Let Loose the Dogs by Maureen Jennings
The Giannakis Bride by Spencer, Catherine
Lundyn Bridges by Patrice Johnson