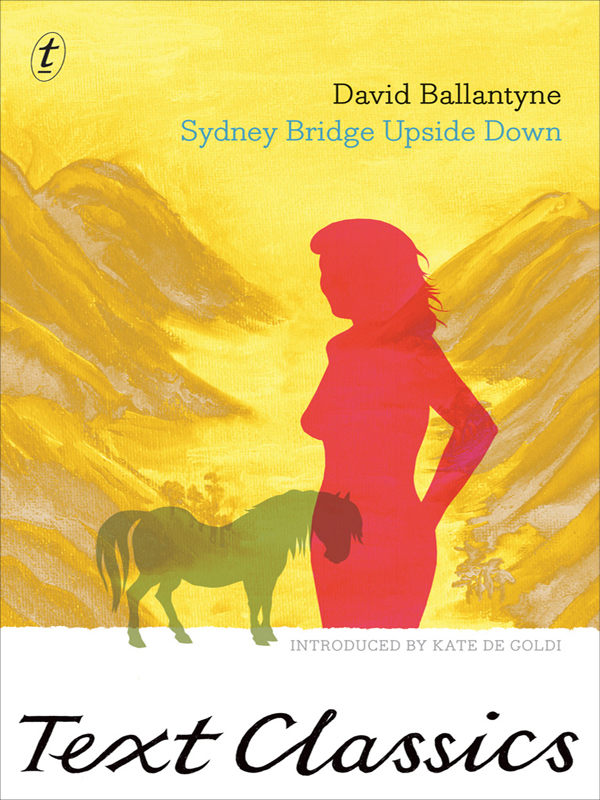 DAVID BALLANTYNE, one of New Zealand’s greatest writers, was born in Auckland in 1924. As a child he lived for a time in Hicks Bay, a remote seaport on the east coast of the North Island and the setting for
Sydney Bridge Upside Down.

Ballantyne left school at fifteen after his father died, and soon started to work as a journalist in Auckland. He was something of a prodigy. His first novel,
The Cunninghams
, was published to critical acclaim, in both the US and New Zealand, when he was twenty-three. He married his wife Vivienne in 1950, and they had one son.

By 1954 Ballantyne and his family had decamped to London, where he worked in journalism. He wrote stories, television plays and a novel,
The Last Pioneer
, published in 1963.

Ballantyne and his family returned to New Zealand in 1966. His masterpiece
Sydney Bridge Upside Down
was published in 1968. He was beginning to struggle with alcoholism but continued to write, and was to produce seven books in all.

KATE DE GOLDI was born in Christchurch. She is a regular radio and television book reviewer in New Zealand. Her books for young adults are published internationally to great acclaim.

A Friend of the Family 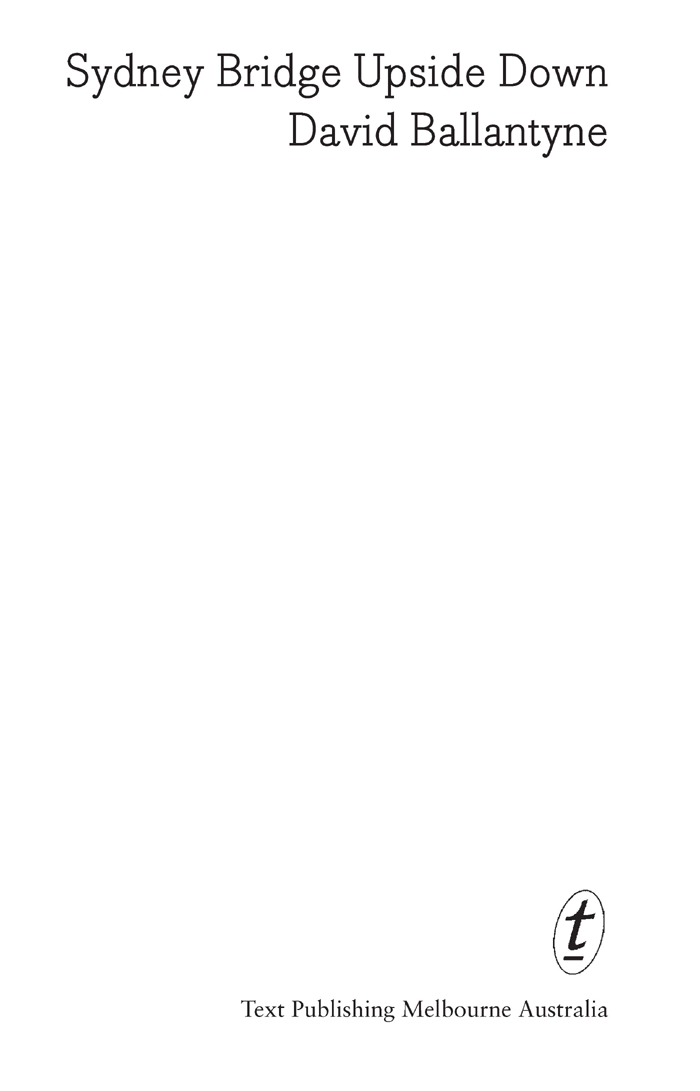 Every effort has been made to trace copyright holders and obtain permission for the use of copyright material. The publisher apologises for any errors or omissions and would be grateful if notified of any corrections that should be incorporated in future reprints or editions of this book.

About the Introducer / Also by

New Zealand literature began in 1882 with the introduction of refrigerated shipping.
This was the inimitable opening line of the New Zealand Lit course offered at Canterbury University in 1981. It was delivered by Dr Patrick Evans whose undergrad fame preceded him: his jokes were so good people actually wrote them down in lectures. Evans’ thesis, as it unfolded, was mesmerising—and deeply unsettling. Born in discussion with Dr Peter Simpson, developed through his lectures and burnished in several provocative essays published in the late 1970s and early 1980s, it went something like this:

Refrigerated shipping—the vehicle for the frozen meat trade—entrenched the basis of the nascent New Zealand economy: the farming and slaughter of animals. The consequent despoliation and industrialisation of the landscape, and the transformation of the New Zealand colonist into ‘a systematic and calculating’ butcher, described the progress of the ‘New Zealand dream’ from an imagined South Pacific Eden (a ‘better Britain’) to a fallen society with, literally, blood on its collective hands. New Zealand became, not the pastoral paradise envisioned by British utopians, but a society in which an industrialised violence was merely the sanctioned version of other widespread
malignancies. In short, we passed from innocence to a decidedly ugly experience.

New Zealand literature, Evans argued, oscillated between work that danced around the ‘truth’ of this national mythology, and work that confronted it in various compelling ways. Using short fiction and novels from the mid nineteenth century through to the late 1960s he laid out the evidence for a ‘slaughterhouse fiction’: the farmer in
The Heart of the Bush
confessing to his wife that not only is he a sheep slaughterer but also the killer of their loved childhood dog; Pat, the servant, in Mansfield’s ‘Prelude’, beheading a duck for dinner in front of the Burnell children (
Even Isabel leapt about crying: ‘The blood! The blood!’
); the very title of Jean Devanny’s
The Butcher Shop
; the ‘severed heads, human incineration, necrophilia, drowning, car crashes’ of Ronald Hugh Morrieson’s fictional world, and much, much more.

It was chilling stuff, and somehow, in 1981, the culture around us seemed to be disposing itself in ways that underscored everything Evans was pointing up. The Springbok Tour (always spoken of in upper case) was underway and the violent clashes between protestors, police and Tour supporters revealed the fault-lines just below New Zealand’s apparently harmonious surface. Significantly, those lines ran between town and country. The laagers of farm vehicles providing barriers against protestors at provincial games were one of the more potent symbols of a country at war with itself.

I was twenty-one that year, newly politicised, idealistic, eager to anatomise our cultural tics and hypocrisies,
to debate the national stories we comforted ourselves with (land of plenty, racial harmony, egalitarianism, social radicalism, shared visions, etc). Patrick Evans’ alternative cultural narrative seemed like nothing so much as an eerie annotation to the ugly community upheavals we were all witnessing.

And reared as I had been on British and American literature (children’s and adult), this immersion in New Zealand fiction, and the invitation to assess it on Evans’ terms, was nothing short of a cultural awakening. Book after book that year galvanised and disconcerted me. Our damaged relationship with the landscape, our repressive puritanism, the casual violence of family relationships, the inarticulate gropings of romance Kiwi-style, the sweat and tedium of work, and, so often, a watching child—a child doubly burdened by preternatural insight
and
fatal misunderstanding of the behaviour and events unfolding around him. These themes and the fictional worlds that buttressed them blew open my reading habits and preconceptions; they certainly marked a crucial step in my own progress to becoming a writer.

But the book that contained all the foregoing, and some other, haunting quality, the book that really knocked me sideways was
Sydney Bridge Upside Down.

There are many ways to describe
Sydney Bridge
(in our house Sydney Bridge is always the book, not the splendid piece of engineering): a coming-of-age story, a gothic anti-romance, a ruined-pastoral thriller, a family tragedy. It has been variously assessed as proletarian fiction, young adult fiction, post-provincial fiction. It is all those things,
of course,
and
the pre-eminent example of slaughterhouse fiction: an abandoned meat-works is both the central symbol of the novel and the site of the story’s most troubling events.

For myself, the most piquant description of the book was Patrick Evans’:
Sydney Bridge Upside Down
, he said, when introducing it to us, is
the
great, and
unread
, New Zealand novel. Merely picking up the book to read it, then, was instant admission to a select literary community. Actually reading it was a beautiful and sinister and unforgettable experience.

Ironically, my first reading was in a sheep-shearers’ hut on a high country Canterbury sheep station. It was waning autumn and the day after a wedding. I lay in a hard, cold bed most of that day, incapable of leaving the story, which —in the way of these things—was hung about with the emotional and sensory circumstance of the reading. So, though the story is set ‘up the coast that summer’ (almost certainly Hick’s Bay, on the east coast of the North Island) and in the mid-1960s, it was also somehow now shot through with the melancholy colours and light of late April, and the mountain air, and the queasiness of the morning-after.

Nearly thirty years later, the novel’s opening is still one of the most entrancing I’ve ever read:

There was an old man who lived on the edge of the world and he had a horse called Sydney Bridge Upside Down. He was a scar-faced old man and his horse was a slow-moving bag of bones, and I start with this man and his horse
because they were there for all the terrible happenings up the coast that summer, always somewhere around.

The DNA for the novel is so artfully laid down in that passage: the mythic setting (‘up the coast’); the faintly threatening old man and his horse, suggestive of Quixotic notions and old conflicts; intimations of watchfulness, of secrets, of decline. And the sing-song voice of the storyteller, evoking a fairy-tale ambience, alerting us to an ‘other’ world and the possibility that nothing is quite as it seems.

It
seems
, on the surface, that Harry, his brother Cal, and his Dad are simply waiting out the summer in their tiny hometown, Calliope Bay (referencing the muse of epic poetry is entirely deliberate, of course) while Harry’s Mum is away in the city. Harry’s holiday is marked by forbidden adventures at ‘the works’ with his mate, Dibs, and the trailing Cal, picnics with the Kelly family, spiky exchanges with his snoopy neighbour Susan Prosser and, most excitingly, naked morning frolics with his sexy cousin Caroline who has come to stay. Caroline is, for the summer, de facto mother and sister, but something much less comfortable, too: the object of men’s frank admiration and a thoroughly sophisticated sexual tease.

So, beneath the surface of this summer-holiday story, behind the faux-innocent narrative voice, is a simmering and most disturbing sexuality—the sense of danger around sex permeates the novel. Harry’s innocent romps with Caroline give way to agitation about his cousin’s safety and an increasingly frantic desire to protect her. Meanwhile,
Susan Prosser is watching narrow-eyed over the fence. Mrs Kelly, Cassandra-like and enigmatic, intones meaningfully as she hands out the picnic food. And Mr Wiggins, the laddish butcher, is disconcertingly ever-present. Only Harry understands the multiple pending threats.

I have read
Sydney Bridge
a number of times since that first fervid immersion, and each time it has been equally powerful, but subtly different—because of course I am different, and because a great book always accommodates revisiting and new insights. Most recently, it seemed more sinister and somehow much sadder than I can ever remember, but I marvelled all over again at Ballantyne’s restraint and control, at the quietly brilliant way he wrong-foots the reader. This is a novel of suppressions and elisions. You must pay attention to what is not on the page. It is after all, and amongst much else, a thriller, and much of the story’s impact comes from the reader’s growing anxiety around exactly what is happening and who is responsible for the ‘terrible things’.

The last chapter remains as mysterious and seductive as ever. I have spent hours anatomising that epilogue. And every time I have anticipated and dreaded the final two sentences, knowing they will break my heart.

Perhaps the real mystery is why
Sydney Bridge Upside Down
is still—more than forty years since its publication— not read. In a sort of faithful, and hopeful, ongoing test of Evans’ long-ago claim, I check it out quite regularly, ask people—book groups, librarians, teachers, other writers— if they’ve ever read it, if they’ve even heard of it: nope.

One reason, of course, is that it’s been out of print for thirty years. But why has it stayed out of print? Patrick Evans had a characteristically provocative theory about David Ballantyne’s critical neglect and lost readership. Ballantyne, he argued, had never attained a recognisable public persona, any public persona for that matter—and since this had become an almost essential condition of literary success, it was his, and the book’s, burden. He contrasted memorably Ballantyne’s lack of serious attention with the reverence accorded Janet Frame and her work, insisting that Ballantyne, too, was a writer of ‘considerable skill and coherence of vision’. But Ballantyne presented a picture of his country that was, forty years ago at least, unpalatable to his potential readership: a dark, unredemptive vision challenging some of our most clung-to mythologies.

I’m thrilled that a publisher has now recognised the power and beauty of
Sydney Bridge
and that it will be out there again, finding its readers, pulling in a new generation, giving them the opportunity to experience what all great fiction offers, and what this book has always delivered in spades: transport, discomfort, and, ultimately, transformation.