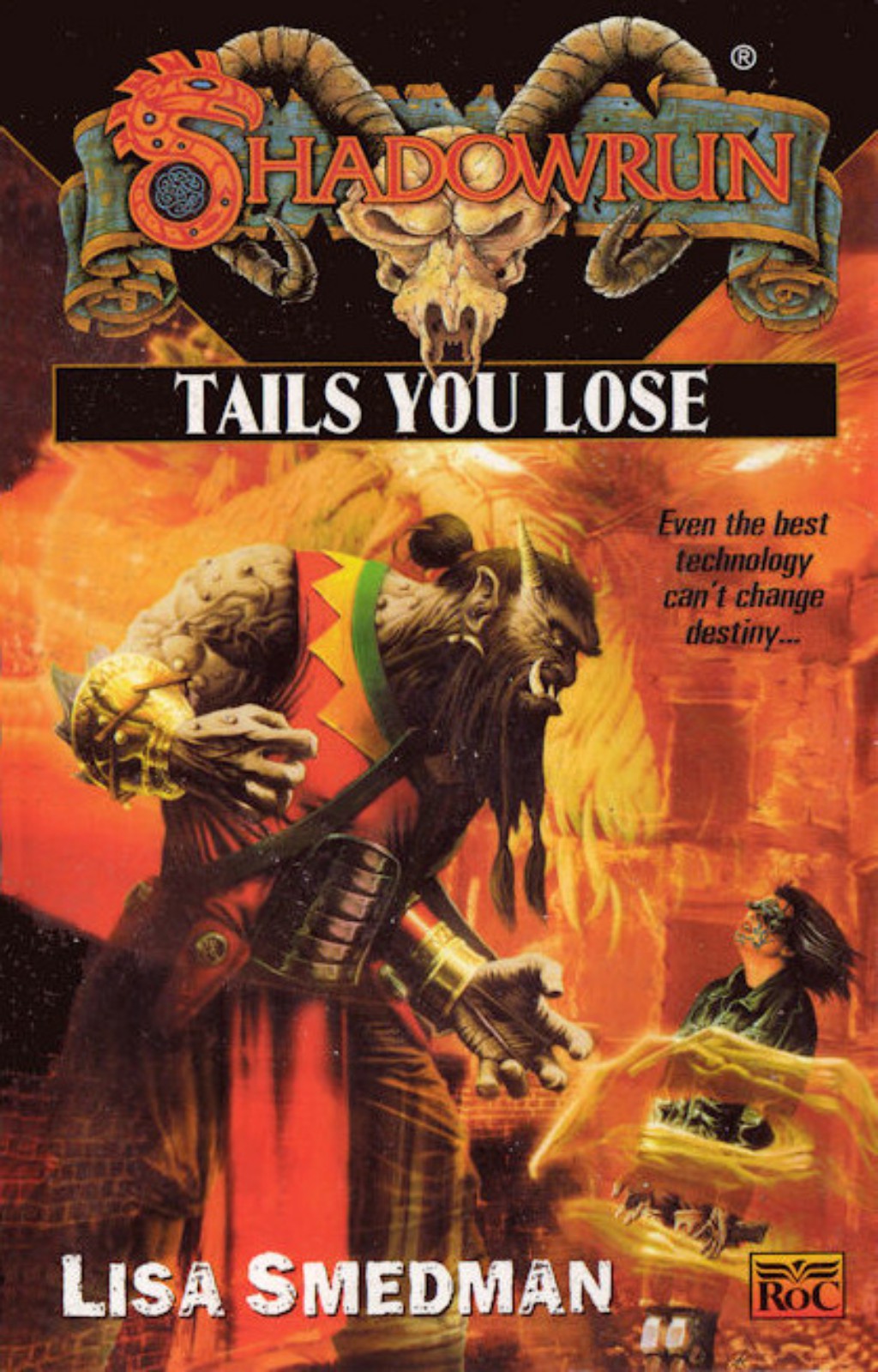 TWO SIDES OF THE SAME COIN

When a shadowrunner managed to extract PCI's most vital employee, it was Alma's job as security expert to get him back—no matter the cost. But all the evidence pointed to the one person who couldn't have done it. . .herself. Branded a traitor, Alma has one shot at redemption: find the real culprit. But she's never faced an enemy like this one. This 'runner not only looks like Alma—she's also equipped with Alma's top-of-the-line cybernetic implants, and she's backed by the powerful magic of the Chinese underworld. Now, the expert in defense must attack—and risk it all to bring down a rival so much like herself that there can be only one shocking explanation. . . .

The troll rose to his feet, lifting his knee from her chest. One cartilage-crusted hand was balled into a fist; he held it over her, maintaining the magical spell that pinned her to the ground.

"You're a dead woman," he said in Cantonese.

"No . . . I'm not," Night Owl gasped. She knew better than to believe his threat. Gangers didn't make speeches before killing someone. They just greased them.

"You have angered Eldest Brother by cheating him," the troll said, eyes blazing. "You sold him property, then told the original owners where to find it again."

"That wasn't me . . . who told. Someone else." It was the truth—but she didn't expect the troll to believe it.

"You agreed to the contract," the troll continued in a grim voice. "You bore the ultimate responsibility."

The troll clenched his fist tightly, causing his bony knuckles to crack. Night Owl's vision swam with stars as the magical arms that were holding her squeezed the last air from her lungs She fought to take a breath, but it was as if she were underwater. Dimly, over the pounding that filled her ears, she heard the troll's final pronouncement—and realized she'd been wrong. Sometimes real-life gangers like to make speeches, too. . . . 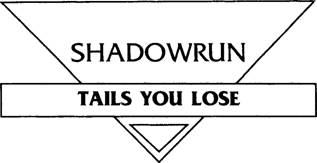 Once again, thanks to the B.C. Science Fiction Association Writers' Workshop for their aid in critiquing this book. Special thanks to Matthew Claxton, Fran Skene and Peter Tupper for their excellent advice and suggestions and, of course, to Leanne Taylor, both for her support and for always being able to suggest just the right plot twist.

Year of the Rat

Anxious not to be a failure, those born in the year of the rat use their intelligence and imagination to suceed. Charming, honest and practical, they are alert individuals who learn from experience. Their materialism is tempered by their sentimental natures; their tendency to be opportunistic is concealed by their grace and elegance.

Attracted to whatever is clandestine and secretive, those born in the year of the rat live for today. Restless and sometimes quick-tempered, they are calculating folk whose actions usually have an ulterior motive. Prone to gossip and grumbling, they obsessively hoard their possessions and often allow their reach to exceed their grasp. 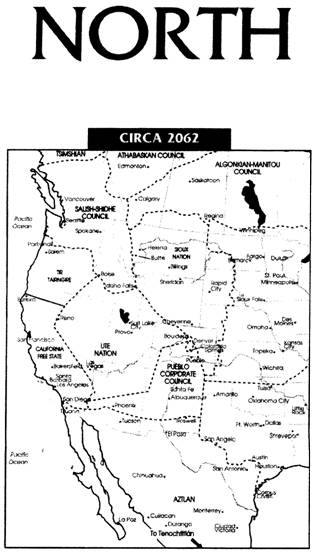 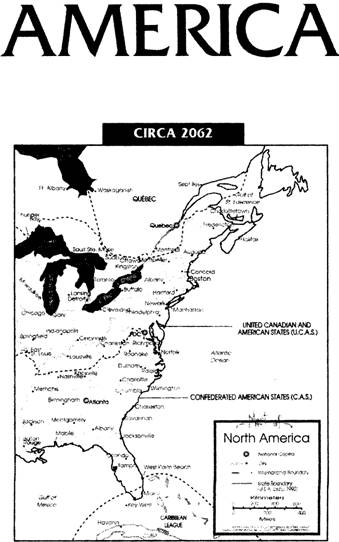 The tremor struck her left hand just as she was completing the first trigram of the I Ching. Three bronze coins with square holes at their centers clattered onto the countertop as her fingers sprang open wide and then fluttered like a moth in a flame. Cupping her left hand in her right, Alma activated the timer in her cybereye and watched the glowing red numbers that appeared in her lower right field of vision. Twenty-three seconds later, the tremor passed.

When it was over, she flexed her hand once and then ran her fingers through the series of complicated gestures that were part of her daily tai chi routine. Her hand moved smoothly, fingers flowing through the forms with absolute precision. She sped the gestures up, and her hand became a blur. Her move-by-wire system seemed to be working fine, accelerating her reactions until her fingers flowed with the speed and grace of rushing water. Sighing with relief, she lowered her hand.

The tremors had started six days ago, on February 17. She'd barely noticed at first—her hand would twitch once or twice and then return to normal. But they'd gradually increased in frequency and violence, and they now struck two or three times a day, preventing her from using her hand properly until the shaking stopped.

Worried that they might be the first signs of temporal lobe epilepsy, she'd booked a scan with PCI's physicians the day after she'd first noticed them. She'd also spoken to Gray Squirrel, asking him if the experimental cyberware she'd been fitted with six months ago might be the cause of the problem. He'd promised to run some tests.

Two days after making that promise, Gray Squirrel had been extracted from PCI. In the wake of the kidnapping, Alma had canceled her CAT scan. Getting Gray Squirrel back was much more important than testing for something that would take months to become full-blown. Even if the tremors were the onset of TLE, the corrective nanosurgery could wait for a few days. The area of brain tissue that had become dysfunctional was probably still very small. She was glad it was her left hand, and not her right, that had been affected.

Alma
reached for the three coins, sliding them across the countertop so that she could see them. All three had landed with Chinese characters face-down: changing yin. Together with the two lines that had already been cast, it formed the trigram for thunder.

Just as Alma was about to begin the second trigram, her cellphone chimed softly. She picked it up and flipped open its screen.

The face that appeared on the tiny monitor was a computer-generated, cartoonish image whose gestures and expressions were slaved with the caller's. Text below the cartoon listed the caller as UNKNOWN MOBILE UNIT. Whoever was telecoming her had blocked the caller ID function.

Alma
thumbed the audio-only respond button. She didn't want the caller to see her face—or her apartment. "Yes?"

The voice that came out of the speaker was male and spoke English with a linguasoft-perfect accent. "Ms. Johnson?"

Alma
allowed a fraction of a second's delay before answering, despite the hope that she felt. Appearing too eager would be unprofessional, especially in front of a shadowrunner. "Yes."

"This is Tiger Cat. I've uncovered some data on the 'package' that was stolen from your firm. How soon can you transfer payment?"

Alma
's heart beat a little faster at the good news. Forcing herself to remain calm, she activated her retinal clock. It was 8:07 a.m.

"Are you near a cred machine?" she asked.

"Wait at least five minutes after this call ends, then slot your stick and call back. I'll give you an access number to key in, and you'll get the first payment. If your data checks out, a second payment will be transferred later."

"My data's good as platinum. I guarantee it."

It took Alma two minutes and eighteen seconds to access her corporate expense account and preauthorize the transfer of three thousand nuyen to a certified credstick. As she waited for Tiger Cat's second call, she stared out through a rain-streaked window at the city of Vancouver and sipped a glass of tyrosine-boosted soymilk. Fourteen stories below her apartment, banks of artificial grow lights inside the biodome that enclosed
illuminated it from within, making it look like a gigantic, multifaceted light bulb. Beyond it, the twinned Lion's Gate and Dan George bridges led to the
, where row upon row of overpriced condoplexes climbed the foot of a blue-green mountain that rose to meet the rain clouds.

Alma
picked up a remote and adjusted the window's polarization. The view of the city was replaced by a reflection of the tiny loft apartment that was kitchen and bedroom in one. Stark white walls, counter and furniture accentuated the room's minimalist look. The only images on the walls were framed certificates of appreciation from Pacific Cybernetics, arranged in a neat row above a table that held a potted cinnamon-scented orchid. Beside the plant was an animated holopic of a dozen children forming a human pyramid in front of a gigantic logo of a rising yellow sun: the Superkids. Their tiny images knelt on a ten-centimeter-wide square of projection plastic, grinning up at the viewer. All wore bright blue-and-yellow New Horizons Incorporated T-shirts, and all were exuberant and happy—except for the boy on the bottom left, who looked pensive and troubled: Aaron.

L.A.P.D. Special Investigations Series, Boxed Set: The Deceived, The Taken & The Silent by STYLE, LINDA
The Means of Escape by Penelope Fitzgerald
Amy, My Daughter by Mitch Winehouse
The School for Brides by Cheryl Ann Smith
Atalanta and the Arcadian Beast by Jane Yolen
Half Brother by Kenneth Oppel
Somewhat Saved by Pat G'Orge-Walker
What I Know For Sure by Oprah Winfrey
Battle Mage: Dragon Mage (Tales of Alus) by Wigboldy, Donald
Melt (Hidden Pleasures, #3) by Kitty Hunter