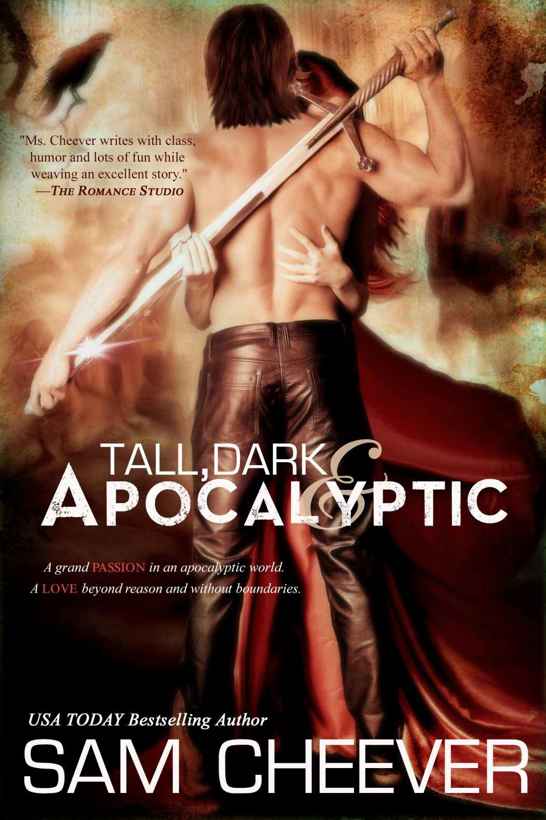 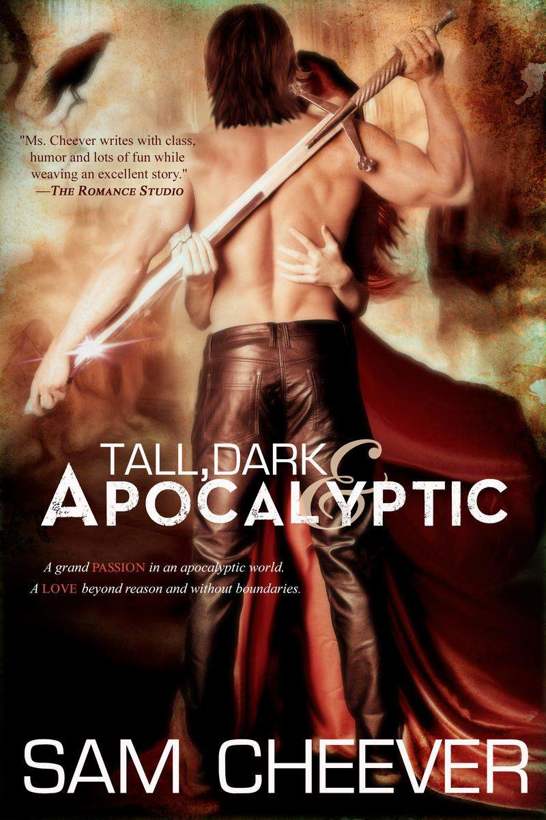 This ebook is licensed for your personal enjoyment only. This ebook may not be re-sold or given away to other people. If you would like to share this book with another person, please purchase an additional copy for each person you share it with. If you're reading this book and did not purchase it, or it was not purchased for your use only, then you should purchase your own copy. Thank you for respecting the author's work.

A grand passion in an apocalyptic world.

A love beyond reason and without boundaries.

He’s a warrior, a bounty hunter in a world turned upside down. She’s a target, a creature of dark magic. His job is simple. Kill the target. Her goal is more complex. She must stay alive until she finds and destroys the source of death magic staining the twenty worlds. But the passion burning within them may be their undoing. It’s going to take an apocalyptic will to overcome the distraction their bodies are creating…and not lose themselves in the process.

Yeira clawed her way across the floor, her limbs locking and clamping as horrific pain racked her slim frame. A fresh blade of agony speared through her as she struggled to crawl just another sliver of space. The pain jolted her to a stop as she sucked in a breath, sending her into a coughing spasm. Blood sprayed the floor as she crawled. Her dazed, blue gaze stared down at the bright droplets arrayed before her over the oily stone and she knew a stark moment of pure fear.

What if she didn’t make it in time?

Beyond the thick, concrete walls of her hideaway, the sound of explosions and chaos were a constant drone, an unrelenting impetus pushing her ever forward.

With a monumental effort of will, Yeira gritted her teeth and dug her fingers into the rough surface beneath them, dragging herself another inch.

She barely noticed the spark of pain as her soft, exposed belly was ripped open by shards of debris on the battle-ravaged floor. Her goal was a mere five inches away.

She thought she could make it.

Yeira closed her eyes as agony washed through her again and lunged another inch. Her fingertips stretched…strained…mere inches from the leather strap.

The world beyond the door exploded and Yeira’s head snapped around. The blast had sounded close. Too close. Panic made her heart pound. “No!” Tears filled her eyes as something heavy hit the door. He’d found her.

With a cry of desperation, Yeira dug her toes into the stone and shoved. The pain erupted in a burst that made her vision gray. She screamed as agony gripped her gut with icy needles, tearing and dislodging the ordered cells of her flesh.

Yeira fell onto her back, her fingers clenching against the torment. Warm, thick blood drenched her lips, dripping down her chin.

The door blasted inward, sending smoke and shrapnel through the room and driving the razor-sharp projectiles into her flesh.

On some level, Yeira felt the pain of the tiny missiles piercing her skin. But she was in the grip of a misery so complete that her mind could barely form a thought. All she could do was scream, her fingers closing convulsively around the thin strap of leather she’d been fighting to reach.

Yeira’s gaze slid to the large shape framed in the door. He was nothing more than a gray haze behind the smoke. A vision of massive male, whose form all but filled the ragged hole that had once been the door.

Yeira shook her head, offended by the thought even in her tortured state. No! The man was there to kill her. She couldn’t lose sight…

The enormous figure shimmered and she realized he was moving closer. On some level Yeira knew she needed to move. But the pain had finally receded as her body gave out. It felt good not to be consumed by it. For just a moment she longed to lie there, enjoying the numbness, and let her life slip away.

Her fingers moved along the leather strip in her hand. Oblivion would be bliss. Yeira slipped her hand inside the bag, feeling for a smooth, oblong shape.

The sound of his footsteps across the littered floor was like a series of canon blasts, and she winced under every one. His massive arms arched from his sides as he walked, the huge hands loosely fisted. He held a long knife in one hand. Thick, muscular legs stuck out from underneath a bloody and tattered kilt, the burgundy and black pattern barely visible under the filth of an extended battle.

Yeira noted the blade in his hand, knowing it was meant for her.

He stopped a foot away, his intense, dark-blue gaze sweeping over her. “My god, woman. You look like hell.”

Yeira’s lips opened and something gurgled in her throat. She thought it might be a death rattle, but it emerged as a laugh. She licked her lips as he cocked his head. “Bite me, Sorceri.”

Amazingly his wide mouth turned upward in a smile. “I don’t swing that way, zombie.”

A dense cold crept up her legs, slipped along her spine. In another minute she would be completely numb. She wouldn’t even feel the knife he held down at his side as it sliced her head from her body. But though she was a breath away from dying, Yeira couldn’t help tweaking him one last time. “You haven’t got what it takes anyway, Kord.”

His smile slipped. The sexy gaze darkened. Yeira realized the smoke was clearing and she could see him in all his glory…a dark avenging angel sent to rip her from the living world. He inclined his dark head, the silky strands of black hair framing a square chin, dark with shadow even when cleanly shorn. “You could be right, woman. But…” He seemed to swallow. “There was a time I would have wished for a different outcome.”

Her eyes widened. A different kind of pain ripped her chest apart. She swore, her fingers closing over the slick, oblong object she sought.

So it was to be a death of a thousand cuts—the first cut deeply severing her heart?

She licked her dry lips. “I never wish, Sorceri. Wishing is for children and fools.” Holding his gaze with her own, she clutched the ancient bluestone in her fist and envisioned her lair. The air above her thinned, turning glossy, and her nemesis started to blur.

As his sexy gaze widened in realization, Yeira was brutally ripped from the battered castle. Her lips open in a silent scream as the ascension tore her apart at a cellular level and sent her plummeting through the void between time.

But all was good. The last thing she heard as her earthly form disintegrated, was the rage-filled roar of the deadly sexy Sorceri warrior as he realized she’d escaped him again.

Audie Kord kicked a chunk of rock and watched it sail through the smoke-drenched air. Somebody called his name and he swung around, glaring.

A fellow Sorceri strode toward him through the chunks of broken stone and dark, shattered wood. The other man lifted his hands and grinned when he saw Audie’s face. “Whoa, Kord. I come in peace.”

Audie looked away. His fists clenched as he tried to reign in his legendary temper. He couldn’t believe he’d lost her again. He quickly buried the tiny glimmer of relief at the thought.

“Did you get the moldy flesh bag you were chasing?” Grimm Forbes asked.

A rumble started in the vicinity of his throat and Audie realized he was growling. He was glad for the surrounding chaos that masked the sound. He wasn’t sure if it was the other Sorceri’s derogative term for Yeira that had brought his hackles up, or the fact that he was going to have to admit she escaped him again.

“No.” His lips curled up in what he knew would be a predatory smile.

Forbes blinked but held his ground, a warrior to the core.

Audie didn’t elaborate. He didn’t want to have to kill the other Sorceri if he laughed. The elders tended to frown on that.

Grimm was suddenly at his shoulder, striding along with him. The man was strangely silent and, glancing quickly at his expression, Audie thought Grimm seemed unusually contemplative. Audie couldn’t help remembering the rumors he’d heard about Grimm—that he was sympathetic to the zombies—wondering if they were true. “She’ll probably die anyway,” he offered gruffly. “She was in pretty bad shape.”

Grimm nodded, a frown creating dual lines between his coal-black brows. “They don’t fare well without the death magic.” He sounded surprisingly unhappy about the statement.

Audie grunted agreement, feeling the tightness in his chest ease a bit. If Yeira made it back to her lair, maybe she would be able to stave off the decay.

He blinked in horror, realizing that what he was thinking was disloyal at best and traitorous at worst. The Sorceri had been engaged to rid the twenty worlds and twenty times of the scourge the dark witch had caused with her nasty little pets. Though not a simple task, the parameters were not complex. Kill them. All of them. Whatever it took.

Audie, more than most, should understand there was no gray area in the orders. He’d watched many of his friends succumb to the vile creatures, who’d managed to lure them in and use their humanity against them.

They could be very alluring when they wanted to be. It was the reason the Sorceri used derogative terms for the creatures. To remind themselves that, despite the often pretty exteriors, they truly
were
dealing with monsters.

Grimm cleared his throat and Audie glanced his way. The other hunter was frowning.

Grimm looked surprised by the question. “What? Oh. It’s just something I heard.”

“What did you hear?”

“Before I could extinguish it, one of the zombies accused me of working for
her
.” Grimm frowned.

“For whom? The dark one?” Audie asked.

“That’s what I thought too, but when I laughed at the idea that I’d be working for the dark witch the creature insisted she wasn’t the one he was talking about.”

Audie shrugged. “He probably meant one of the mages…”

“No. The creature insisted the woman was one of them.” Grimm’s frown deepened. He stopped, casting a worried gaze toward Audie. “Kord, these are very advanced creatures. It’s plausible that one of them somehow gained a sense of right and wrong when she was created. What if there
is
a zombie working against the witch? That would mean she was on our side.”