Read Tears of No Return Online

Tears of No Return 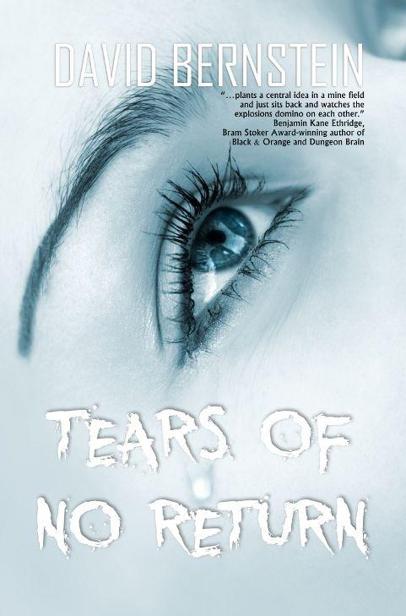 “David Bernstein has a knack for getting to the heart of a story, and with
Tears of No Return
, he’s taken a classic tale of lovers on the run and made it boldly and genuinely his own. Reading Bernstein’s latest, I felt like I was reliving everything I loved about
The X-Files
, and Dean Koontz, and
Buffy the Vampire Slayer
...yet filtered through a tough, original voice, one that maintains perfect control over the story at all times. I’ve said before that Bernstein is who you should be reading now, and this book is absolute confirmation that Bernstein is a storyteller of the first stripe.”

“
Tears of No Return
begins with a gripping chaos of mind-readers, secret government agencies and vampires and never lets up. It demands to be read for all its intensity. David Bernstein plants a central idea in a minefield and just sits back and watches the explosions domino on each other. Thoroughly entertaining and highly recommended!”

“David Bernstein deftly threads the needle with this one, intertwining genres and stitching together with honed precision a story of two most improbable protagonists thrown together to foil a most devious government agency. There are aliens. There are vampires. And amidst a relentless narrative, blood spills, tears fall, and the tropes get wonderfully skewed! This is what the Friday-Night-Frights always wanted to be! I loved this!”

Tears of No Return

No portion of this publication may be reproduced, stored in any electronic system, or transmitted in any form or by any means, electronic, mechanical, photocopy, recording, or otherwise, without written permission from the authors. This is a work of fiction. Any resemblance to any actual person, living or dead, events, or locales is entirely coincidental.

Formatting and design by Peter Giglio

This book is dedicated to my family, as always. I cannot thank them enough for supporting me in whatever I do.

Karen was on her way to work and needed cash. She had spent her entire paycheck at Donna’s Male Review the night before where she and her best friend, Melanie, were celebrating Melanie’s landing of a new client for Gimble, Mercowitz and Steiner, the architectural firm where they both worked. Looking forward to taking her best friend out for some time, Karen had paid for tips, drinks, everything.

Heading down Houston Street—a route she knew well—Karen pulled her Mercedes over to a metered parking spot.

She grabbed her purse and quickly exited the car, pressing the lock button on her remote keychain. Even when she was only going to pop in and out of a place, the task had become habit.

Karen slid her ATM card into the card reader on the bank’s door. The red LED on the device switched off, replaced by a green one. As she pulled the door open and stepped inside, someone from behind slammed into her spine, knocking her to the floor.

“Get up. Get the fuck up,” a man’s voice demanded.

Karen turned and saw what looked like a homeless man standing a few feet from her. He was huge, easily over six feet tall. His clothes were ragged and bombarded with a multitude of stains, but his face was cleanly shaven, the skin appearing soft. He wore a dirty wool hat, but no hair showed from beneath it. A noxious aroma, a mixture of bad body odor and garbage, invaded her next desperate breath. She wanted to vomit.

“Are you deaf? I said get the fuck up.” The man had lowered his voice, but his eyes were as intense as a starving lion’s.

Karen did as ordered, her right leg biting. She glanced down and noticed her knee was scraped and bleeding. Not wanting to take her eyes off the man, she looked back up and asked, “What do you want? Money?”

The man pursed his lips together. Cheek muscles bulged as he ground his teeth. “I want you to do exactly as I say. You got it, Lady?”

Karen nodded as if she understood, but just wanted the man gone. She held out her ATM card, hoping he’d take it and leave.

“Here,” she said. “The pin is 4-3-5-5.” She had seen enough news stories about people getting mugged while at ATMs and knew it best to just surrender. The most he could get was five hundred dollars, not an amount worth dying over.

Ignoring her, he asked, “Is that your car out there?”

Karen glanced at her Mercedes—had he seen her drive up in it?

The man didn’t like that response, his face grimacing as if he was in physical pain over the lone word. He stepped toward her.

Karen recoiled. The man’s right arm became a blur, shooting forward with lightning quickness. He grabbed her by the throat and pinned her against the wall. “I’m not playing around here, honey, so stop the lying.”

Loosening his hold on her, he said, “Let’s start again, okay? You do what I say, and don’t lie to me, and maybe—just maybe—I won’t plunge this knife into your skull.”

The man drew a large steak knife from the inside of his jacket and held the menacing-looking piece of cutlery in front of Karen’s widening eyes. He grinned wickedly, revealing nicotine stained teeth, then slid the knife under her chin and caressed the nape of her neck with its sharp edge.

Karen closed her eyes, too frightened to look, and raised herself up onto her toes in an attempt to get as far away from the knife as possible. She struggled to breathe while waiting to feel the burn across her throat as the blade separated her flesh.

The man released his grip on her and stepped away.

Karen opened her eyes to see the man returning the weapon to his filthy coat. She tried not to cry, but the situation was too much for her. Tears welled, blurring her vision.

“Don’t even think about crying,” the man told her. “I hate that shit.”

Karen fluttered her eyelids and took a few deep breaths, trying to stem the flow of tears.

“Now, this machine is out of order, so we’re going to take a little ride in your car, okay?”

That was a no-no, the worst possible outcome, and Karen knew it. He could have the money, but getting into her car with this guy could lead to bad things, very nasty things; things she didn’t want to think about. She looked back and saw the ‘Out of Order’ sign taped to the machine. The man grabbed Karen by her left arm and pulled.

“Please, don’t do this,” she pleaded.

The man released Karen’s arm, instead grabbing her by the hair. Turning, he headed for the door, dragging her with him. She reached up, trying to pry the man’s gargantuan mitts off of her, and dropped her ATM card in the process.

The man stopped abruptly. He pulled Karen close and spoke through clenched teeth. “I’ll kill you. Right here, right now. Your pretty little face doesn’t mean shit to me. I’ll find another bitch to use. Now pick up the fucking card and stop screwing around.”

Karen was frightened, but could feel a seed of fury growing in her belly. She was angry and growing more so with every second. Who the hell was this pig, thinking he could treat her as if she were a worthless piece of trash? To do with her whatever he wanted?

Karen told herself that if he didn’t have the knife, she’d fight back, punching, kicking, clawing, biting—whatever it took. She’d leave the scumbag with war wounds he would never forget, but she was scared, terrified. Beyond that, there was something wrong about him. He was dressed like a homeless guy, but his face, skin, and breath spoke otherwise. He was
acting
like a homeless man—but why?

Karen bent down. Her bruised knee protested. She picked up the ATM card. Dropping it into her pocket, she pondered the walk to the car.

It was Monday morning. She remembered pulling up to the bank at ten minutes after six, according to the clock in the car. Leaving the bank with this guy—dressed as she was in her gray suit, long legs jetting out from her skirt—might be enough to attract the help she needed. The bloodied knee only added credibility.

He made Karen give him her car keys. “I’ll unlock your doors on the way, but you’re driving, and don’t try to run or yell for help.” Then he added, “I won’t give you another warning.”

She believed he would cut her down the minute she made a sound or tried to break for freedom.

They left the bank, Karen in the lead with pretend-boy behind her. The lights flashed twice on her car, indicating that the alarm was off and all four doors were open. She glanced left and right without moving her head, looking for someone she could make eye contact with, but there was no one. At the end of the block, people were waiting for a bus. Even if she could get someone’s attention the big guy would probably kill her before help arrived.

Karen walked around the front of her car while the man waited at the passenger side door. She got in and sat down. The man stood outside with his door ajar, keeping her from locking him out.

This guy was no street resident. He was too clear-headed, and acting like he’d done this before.

The man got in and shut the door. He pushed the lock button and all four doors clicked simultaneously. His nauseating odor filled the car, making the air too thick to breathe. Karen gagged, the foul combination of odor and nerves threatening to overpower her consciousness. She began breathing through her mouth in order to avoid the acrid smell. Another wrong move on her part and the guy would simply off her and move on to another target.