Read A Week for Love to Bloom Online

A Week for Love to Bloom 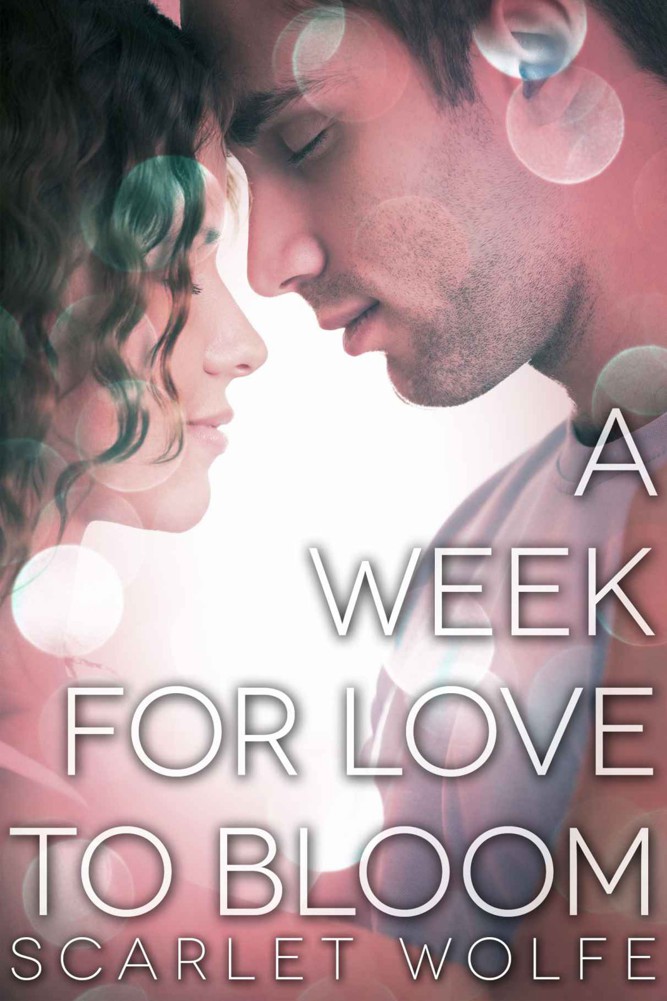 A Week for Love

An excerpt from Brett and Hannah

This is a work of fiction. Names, characters, places and incidents either are products of the author’s imagination or are used fictitiously. Any resemblance to actual events or locales or persons, living or dead, is entirely coincidental. No part of this book may be reproduced in any form or by any electronic or mechanical means including information storage and retrieval systems, without permission in writing from the author. The only exception is by a reviewer, who may quote short excerpts in a review.

To my husband, Patrick, who has repeatedly pulled me up from the darkness and believed in me when I couldn’t. You’ve shown me that unwavering love and passion do exist.

Lauren
noticed how bright the moon was as she rolled down the windows and felt the rush of the cool, late May air. She was wearing her work t-shirt, jeans, and her long, dark hair was pulled back into a ponytail. On the drive back from her father’s house, she became flustered and confused over the conversations with him. He tried to persuade her to sell the family gardening and nursery business he walked away from and move near him a few hours from where she lived with her mother in Masonville, Tennessee.

She
wanted to feel in control, but since her parents’ separation one-year prior, Lauren felt powerless. She found it irritating that at the age of twenty-one, her parents continued to fight over her. She once believed that this was something only young children experienced in divorcing parents.

Lauren snapped out of her trance a mile and a half from her home when she spotted someone walking on the side of the
road. Passing by the hitchhiker, she impulsively brought her pick-up to a screeching halt. Her anger toward her parents caused a desire to be defiant, and it was overruling her concern for her personal safety.

L
auren looked in her rearview mirror and saw the man hesitate before he approached her truck. She was surprised by his appearance as he peered at her from the passenger side. She quickly took in his attractive features from his dark hair and the distinct outline of his muscles being hugged by his t-shirt, to the profound depth of his rich, blue eyes. She guessed he was a little older than she.

L
auren gave him a shy smile. “Get in if you want a ride.”

Before
climbing in, he threw his backpack into the bed of the truck. The thud echoed around them. Lauren looked straight ahead after pulling back out onto the road. Her decision to allow a stranger in her vehicle started to sink in, making her heart pound in her chest.

She
looked over at him. “You’re not a serial killer or axe murderer are you?”

“What gave it away?” he asked as
he looked straight ahead.

Lauren’s eyes darted nervously a few times between him and the road.

He could be one of those hauntingly handsome serial killers I see in movies.

“Seriously, tell me you’re not.”

“Isn’t it a little late for that? I mean, I’
m already in your truck.” He finally looked her way and smirked.

The guy
hung his head and shook it. “I’m just saying, you should’ve thought that through before you picked up a total stranger.”

Panicking from her reckless
behavior, she slammed on her brakes. “Get out! Get—out—now!”

H
e jumped out hastily and slammed the door before he grabbed his backpack from the bed of the truck. He looked back into the passenger window. “I was joking. You know, I was perfectly content walking. It appears I might’ve been safer!”

Her face flushed. As she drove away, Lauren was bewildered by
her attraction to the man. His words had her mind filling with self-doubt over kicking him out. She slammed on her brakes, bringing her truck to a stop again.

Lauren jumped out and walked back to meet up with him in the road. The darkness had her questionin
g her decision once again. “Listen, I’m sorry. I got spooked. Please let me give you a ride.”

The man
furrowed his brow. “No thanks. I’m good.”

Lauren grasped her hips and lightly stomped her boot
at an angle in front of her. “Just let me give you the damn ride. I feel bad about yelling at you and throwing you out.” She observed him trying to conceal a smile and figured he found her change of heart amusing.

They both walked back to
her truck.

“If it makes you feel better,
I’m not a hitchhiker. I chose to walk, and murder is not a pastime of mine, either.”

Lauren
took a glimpse at him. She felt safer once she saw a grin on his face. “Are you headed somewhere close?” she asked.

“
I’m staying just a couple of miles down the road. So … what are you doing out this way so late on a Friday night? And I couldn’t help but notice your work boots. What are those all about?”

Lauren kept her
eyes on the road as a chuckle escaped her.

“
I didn’t see that question coming. I was out of town today visiting someone, so I had a long trip back, and as far as the work boots ... I work outside every day. Do you make it a habit of admiring women’s shoes?”

“Masonville may be in the country, but I don’t recall seeing
many women in work boots when I lived here, especially any that were attractive. I was just curious.”

Lauren blushed
. She passed the road she lived on and made a mental note that where he was staying was only a half-mile from her home.

After driving a little further
, the silence made her uncomfortable. “Did you grow up in Masonville?” she asked. She glanced his way as the cool breeze whisked through his tousled hair. Lauren thought the length was just right, long enough to run her fingers through. She was unaware of how long she stared at him until he grinned and pointed to the road in front of them.

Lauren swiftly looked straight ahead as her face turned crimson.

“I’m from here, but I’ve lived out of state a long time. The house is right up there on the left,” he said, pointing to a spacious home that Lauren always admired whenever she passed it. She pulled up into the driveway.

The man
got out of the truck and grabbed his bag before he leaned back into the passenger side and smirked. “You know, you really shouldn’t pick up men on the side of the road. They might be serial killers or even worse—axe murderers.” He ran a hand through his wind-blown hair.

Lauren flashed a grin
. “I guess I got lucky this time.”

“Can I get your name in case I take up stalking instead of murder?” he
asked.

Lauren seldom flirted with men, but she found herself
very attracted to his charm and great looks, so she couldn’t resist. “I’ll give you a few clues—you know, to better your stalking abilities. My last name is Evans, and ... dirt and the work boots are your other clues,” she said, letting out a giggle.

Oh my God,
Lauren. You’re acting like a flirty teenager. Stop it!

“That so
unds like a challenge, Ms. Evans. I mean, it is Ms., right? I can’t imagine a husband being happy with you picking up strange men.”

Lauren realized how personal the conversation was becoming
, and her rebellious side was wearing off fast, so she felt it was time to leave. “It’s Ms. Have a good night stranger.”

He
called out to her as she started to pull away. “All right
woman
. I bet I figure it out!”

He watched her pull out onto the country road.

Damn, she’s beautiful. This town isn’t that big. I
'll find her.

Justin Garrison felt an invading force pulling him toward her. He
recalled how he found her green eyes striking from how brilliant they appeared in the night. He thought it was interesting that along with her having soft, feminine features, there was dried mud on the toned, thigh area of her jeans. Her appearance piqued his curiosity about what she did for a living.

“I
t might be a good summer after all,” he said in the darkness.

He didn’t expect to be offered a ride when he decided to walk the couple of miles from the bus stop to his brother’s home. Not in a hurry to get to his hometown, he forewent a plane ticket and took a tediously, long bus ride from California to Masonville. He was exhausted and questioned his logic with that decision.

His father owned one of only two law offices in Masonville. His older brother Jonathan, who worked in his father’s office, would soon take over the business when their dad retired. The family wanted Justin to follow in their footsteps, but he was always interested in science and knew, since becoming a teenager, that he didn’t want to be an attorney. His family never accepted his decision and believed they could get him on board if he was home long enough.

He walked up to the large two-story home and
stared at the front door. Letting out a deep breath, he hesitated before he grabbed the key from under the mat. He didn’t want to admit it, but he was ready to crash on a comfy bed, even if it belonged to his wealthy, successful brother.

Lauren made it home safely and tried to slip up to her room without her mother hearing. After the long day and embarrassing encounter with the mysterious young man, she wanted to bury her face into her pillow and pray for a better tomorrow.

“Lauren, honey is that you?”
her mother Claire called from the living room.

Wax by Gina Damico
The Day of the Moon by Graciela Limón
Cowboy Famous: Book 4 (Cowboy Justice Association) by Olivia Jaymes
Out of Reach: A Novel by Patricia Lewin
Darkness on Fire by Alexis Morgan
The Gossip File by Anna Staniszewski
Forbidden (Addicted to You Book 2) by Flatman, NJ
The Champagne Queen (The Century Trilogy Book 2) by Petra Durst-Benning
Billow by Emma Raveling
Copycat by Erica Spindler