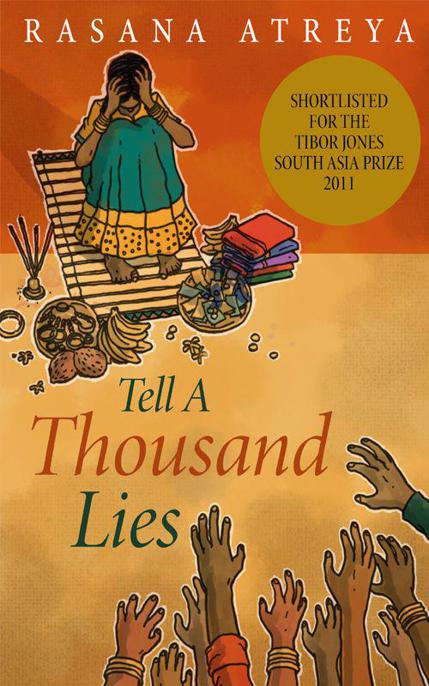 Synopsis of
Tell A Thousand Lies

I
n a land where skin
colour
can determine one's destiny, fraternal twins PULLAMMA and LATA are about to embark on a journey that will tear their lives apart.
Dark skinned Pullamma dreams of being a wife. With three girls in her family, the sixteen year old is aware there isn't enough dowry to secure suitable husbands for them all. But a girl can hope. She's well versed in cooking, pickle making, cow washing -- you name it. She's
also obliged her old-fashioned grandmother by not doing well in school.

Fair skinned and pretty, her twin sister Lata would rather study medicine than get married. Unable to grasp the depth of Lata's desire, the twins' Grandmother formalizes a wedding alliance for the girl. Distraught, Lata rebels, with devastating consequences.
As Pullamma helps ready the house for her older sister Malli's bride viewing, she prays for a positive outcome to the event. What happens next is so inconceivable that it will shape Pullamma's future in ways she couldn't have foreseen.
Tell A Thousand Lies
is a sometimes wry, sometimes sad, but ultimately realistic look at how superstition and the
colour
of a girl's skin rules India's hinterlands.

For my grade school children, Sunaad and Aamani, who really, really wanted to design the cover of this book. Maybe next time, kids.

I
am not my husband’s wife, nor my child’s mother. Who, then, am I?

Preparing for the Bride Viewing

“G
ood thing you aren’t pretty, Pullamma,” Lakshmi
garu
said with a laugh. “Can you imagine the headache if we had to hide you, too?”

I bit the inside of my cheek. Lakshmi
garu
was here to lend moral support for my older sister’s bride viewing, and I mustn’t forget it.

I wondered if
‘garu,’
as a term of respect, was wasted on this friend of my grandmother’s. Still. I was sixteen now. Couldn’t let words escape my mouth without proper consideration.

Lakshmi
garu
studied me for a long moment, the wide slash of her mouth disappearing into the flat rectangle of her face. Shaking her head, she turned back to my grandmother.

It couldn’t be easy for our Ammamma, saddled as she was with three orphaned granddaughters and no male support, to marry us off. If today’s alliance for Malli fell through, where would we find another family willing to accept the limited dowry we had to offer?

Of the three of us, Malli was the most beautiful. But my fraternal twin, Lata, was pretty, too; it was for this reason she’d been packed off to a relative’s house, out of sight of the groom’s family. For, if they got it into their heads to take Lata home as their daughter-in-law, it would be hard for us to refuse them. Given that Malli was the best-looking, it was unlikely, but why take the risk? If they chose Lata over Malli, forever people would think there was some defect in Malli that had caused the groom’s family to reject her. Who would marry her then?

Now, as Ammamma, Lakshmi
garu
and I waited for the prospective bridegroom’s family to grace us with their presence and decide if our Malli was good enough for them, I surveyed our walled-off rectangular courtyard. Our house was a series of rooms lining the back of our courtyard, one opening into the next, like the compartments of a train. A veranda separated the rooms from the courtyard. Perpendicular to it was our cowshed. On either side of the cowshed were a tamarind tree and a
sampangi
tree. A coconut tree drooped against the far end.

Lakshmi
garu
was settled next to the
sampangi
tree, on a straw mat laid out on the mud floor. It was against this tree I sat, as I made my promise to
Goddess
Durga
– if this alliance went through, I’d break coconuts at her altar.

That got me thinking. How many coconuts would it take to appease the Goddess? Two? Five? Twenty? Two seemed a little... miserly. This was bride viewing, not some silly plea to have a cute boy smile at me. But, if I promised too much and couldn’t deliver, the wrath of the Goddess would surely befall me. Even more important, if Ammamma were forced to pay for twenty coconuts out of our meagre household income,
she
would strike me dead. Five seemed safer all around.

“Pullamma,” Ammamma said, interrupting my internal debate. “They should have been here twenty minutes ago. Go over to the post office and keep a watch for them.”

The only way into the village was past the post office, so I sprang to my feet.

“Let the girl be,” Lakshmi
garu
said. “How can they come here so soon? That, too, after travelling all night? They need time to freshen up, don’t they?”

I flopped back on the ground.

I sighed, carefully arranging my half-sari over my feet. Remembering to be ladylike wasn’t as easy as it sounded.

Lakshmi
garu
’s sons were to pick the groom’s family up at the railway station and take them to their relatives’ house. There the visitors would take their baths, have breakfast, and don their finery before coming over to view the bride.

Ammamma face’s reflected the tensions of the past few days. She stood, hands on hips, eyes locked on the narrow courtyard gate built into our compound wall.

“Oh, for goodness’ sake, sit down.” Lakshmi
garu
patted the straw mat. “It is hurting my neck to look up at you.”

Ammamma sighed. She sank onto the mat, taking care not to wrinkle her orange silk sari. She fanned herself with a palm-leaf, despite the chill of the winter morning. Her eyes remained on the gate.

“At least the walls appear new,” I said, proud that I’d helped make the house so festive.

Ammamma gave me a distracted smile. She had done her part by getting the vegetable seller to whitewash the walls of our house in return for a whole year’s worth of homemade mango pickle. But I’d been the one to make the intricate
muggu
pattern on the courtyard floor, blending white rice flour with coloured chalk. I’d also been the one to apply a fresh coat of cow dung to the courtyard walls in an effort to gloss over the cracks. Now the walls looked almost new. But what I was most proud of were the flowers strung across our doorways – bright orange marigolds and pure white jasmines.

I’d risen before dawn to visit the wholesale flower market with Murty
garu
, husband of Lakshmi
garu
.
Women were already streaming into the tight lanes, huge wicker baskets balanced on their heads and hips, the overflowing flowers a stunning contrast to the dusty by-lanes.

After the women settled alongside the road, squatting next to their baskets, Murty
garu
and I walked past, picking a small basket of flowers here, a length of woven flowers – measured from finger-tip to elbow – there.

If my efforts helped Ammamma get a granddaughter married off, I’d be forever grateful to Goddess
Durga
. I felt a pang at the thought of sweet Malli getting married and going off to her in-laws’ home. Then it would be Lata’s turn. Soon, I’d be the only one left. Oh well, at least I’d have Ammamma.

A fragrant yellow-green flower floated down in the gentle breeze. Ammamma reached for it and shredded its rubbery petals, her eyes fixed on the gate. The cow mooed, startling her. “Where are these people?” she asked again.

This event was all we had talked about, planned for and worked around for two whole weeks; actually all our lives. Ammamma had high hopes for this alliance. The marriage broker had assured her the groom’s family was more concerned about the colour of Malli’s skin than the size of her dowry.

This lack of interest in dowry was of particular worry to Ammamma. “My Malli is a gem, no doubt, but why are they settling for less?”

For Lakshmi
garu
, the most suspicious part was the marriage broker’s assurance that the dowry demands would be quite reasonable. “I just hope the boy doesn’t have some disease they’re hiding,” she said.

Lakshmi
garu
was a great one at being supportive.

“If he limps or something, I’m okay,” Ammamma said. “But anything more serious…”

Impatient at the delay, I jumped to my feet.

Nodding, I hurried through the gate to the post office on the other side of the village square.

The post office was a tiny, airless room which the postmaster rarely used; most days, he was to be found at his desk under the tamarind tree. Today, Murty
garu
was seated on a metal folding chair next to the postmaster, facing a line of squatting villagers. Letter reading was, of course, the job of the postmaster, but Murty
garu
pitched in whenever he could.

While Murty
garu
read a letter out loud to an elderly man, the postmaster was busy writing a letter on behalf of Lakshmi
garu
’s neighbour, a young woman whose husband had migrated to the city in search of work. He leaned forward, his ink-stained fingers tapping on the sun-dappled desk. “Do you want to tell your husband that your
Chitti
lost her first tooth?”

The postmaster bent forward and scribbled.

“About your mother-in-law’s fainting spell?”

“What about the child that is coming? You haven’t given him the news, have you?”

The woman covered the lower half of her face with her sari and giggled.

I flushed with excitement.

A couple of labourers, cotton towels wound around their heads to prevent sweat from dripping into their eyes, ran up the dusty road, heralding the arrival of the groom’s family.

Murty
garu
looked up from the letter he was reading out loud and smiled apologetically at the old man squatting across from him. “I’m an elder at the bride viewing for Pullamma’s sister.”

When a Laird Loves a Lady (Highlander Vows: Entangled Hearts Book 1) by Julie Johnstone
Passage at Arms by Glen Cook
A Very Good Life by Lynn Steward
Raw Silk by Delilah Devlin
Shapeshifters Anonymous by J A Konrath
(#20) The Clue in the Jewel Box by Carolyn Keene
Manhunt: The Ten-Year Search for Bin Laden--From 9/11 to Abbottabad by Peter L. Bergen
Longitude by Dava Sobel
The Alexandru Chronicles: The Beginning by Julienne Holmes
06.Evil.Beside.Her.2008 by Casey, Kathryn