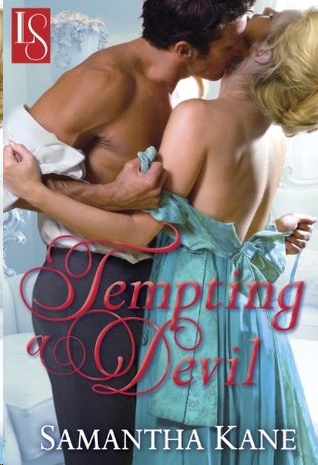 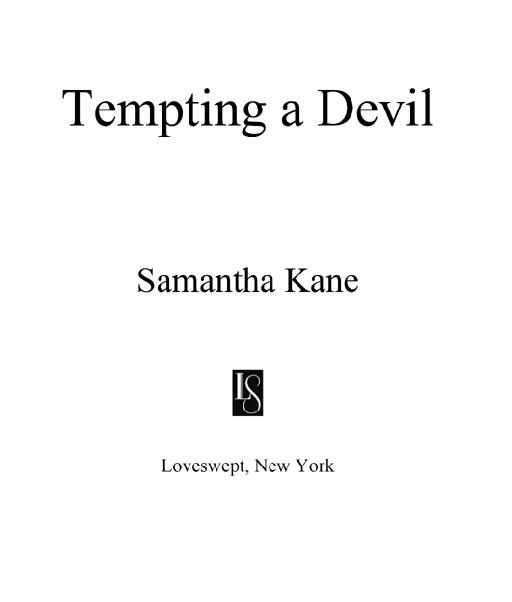 Tempting a Devil
is a work of fiction. Names, places, and incidents either are products of the author’s imagination or are used fictitiously.

Published in the United States by Loveswept, an imprint of The Random House
Publishing Group, a division of Random House, Inc., New York.

LOVESWEPT and colophon are trademarks of Random House, Inc.

This book is for my husband and my children, as every book has been and will be. They are my rock, the foundation upon which my creative endeavors are encouraged to grow and thrive. For all the times you patiently waited for me to finish my work, and didn’t complain about sandwiches for dinner, thank you.

I’d like to thank my critique partner, Julie Gupton; my editor, Sue Grimshaw; my agent, Eric Ruben; and Kati Brown. At some point while writing this book they all took the time to help and encourage me. I’d also like to thank my readers and my friends within the writing community for your support. You all never fail to cheer me up and you inspire me to sit back down at the computer every day.

Excerpt from
The Devil’s Thief

Excerpt from
Flirting with Disaster

Roger Templeton slowed his pace as he heard the woman’s angry voice coming through the trees on his right. He couldn’t see anything in the darkness. If he remembered correctly from past experience, there was a clearing of sorts over there, a favorite trysting spot at Crumley’s entertainments. Perhaps this was a lover’s quarrel? In which case he ought to just move on.

He’d slipped out of the ballroom to take a walk through the garden and get some fresh air. He wished he had his own tryst awaiting him since he hadn’t had a woman in over two months. There wasn’t anyone to his taste here this evening, either, in spite of the interest of several women of questionable character. He’d actually had to sneak out of the house to avoid their pursuit. This party was fiendishly boring despite the crush and he was seriously contemplating leaving altogether to simply get drunk in his room back at his friend Sir Hilary St. John’s house. Hil was probably out enjoying one of his numerous, mysterious lovers, so he’d have to drink alone, which was so damned sad.

“I said let go,” the same woman demanded in a loud, angry voice. Roger stopped walking. There was something vaguely familiar about it. She certainly wasn’t trying to be discreet.

“Madam, perhaps you have forgotten why we came out here.” The man’s voice was a harsh whisper. At least he was attempting discretion.

“The why matters not,” she said coolly. “What matters is that I now find your company unappealing and wish it removed.”

“I will remove my presence when it suits me. And it will not suit me until I get what you so blatantly offered inside.” He was clearly angry.

Roger had just let out a deep sigh of resignation at the inevitability of having to interfere when she let out a sharp cry. He swiftly cut through the light brush in the stand of trees off the path and headed toward the sounds of struggle.

When he emerged through the trees into the clearing, lit by the pale moonlight, he saw a tall, voluptuous woman grappling with a man of equal size. The battle was even, but rather than leave them to it, Roger stepped forward so they would see him. He hated to leave the woman’s safety to chance. She saw him first.

“Well, don’t just stand there,” she admonished. “Get this cretin off me.”

Roger laughed out loud as the other man quickly stepped away from the woman, smoothing the front of his jacket. “It would seem my services are not required after all,” Roger commented. He made a shooing motion with his hands. “Go on, then. The lady has made her wishes known.”

“You shall regret your interference, Templeton,” the man said in an unsteady voice.

“Good God, Dumphrees?” Roger said incredulously. “You actually found a woman who would agree to an assignation? It’s no wonder she changed her mind after she got a good look at you.”

“What’s wrong with him?” the woman asked suspiciously. “Shall I have to see a doctor?”

This made Roger laugh even harder. “Not that I am aware, but I shall make discreet inquiries if you desire.”

“How dare you?” Dumphrees demanded. “I’ll have you know that women adore me.”

“For a steep price,” Roger said with amusement.

“Enough,” the woman said in a strong, no-nonsense voice. “Dumphrees, you are dismissed. Be gone.”

She raised both arms as she repinned her hair and for the first time Roger noticed how outrageously attractive she was. She was incredibly voluptuous, her curves accentuated by her clearly expensive and well-cut dress of some indeterminate light color, which highlighted her hourglass figure against the dark trees behind her. Her hair was a rich, burnished dark gold, a riot of unruly curls barely contained by the pins she shoved in randomly. While she seemed familiar, Roger was quite sure he’d never enjoyed the pleasure of this particular lady’s company before. He would definitely remember her.

“Why …” Dumphrees was speechless. “I’ve never … that is impossibly rude.”

“Hardly. I found it entirely possible.” She lowered her arms and treated Dumphrees to a glare from the largest almond-shaped, long-lashed eyes Roger had ever seen. He knew those eyes, yet try as he might he couldn’t place her. Her sharp, slanting cheekbones highlighted those amazing eyes and drew attention to her luscious, full-lipped mouth. She had the body of Venus, and the face to match. The result was an exotic mix. If not for her proper British accent he’d have thought her Italian, or perhaps Greek. Her heavy dark blond hair was barely contained by those flimsy pins in an entirely too suggestive style. She looked like she’d been well and truly tousled. Her beauty was
almost ludicrous. No woman should look like that. Particularly not one who had been in Dumphrees’s arms. Roger shuddered in revulsion at the thought.

“Slut,” Dumphrees threw at her caustically.

Roger took a menacing step forward, but she only laughed.

“Really? If that were so, the fact that I find you entirely disgusting says more about you than it does about me, I’m afraid.” She shook her head. “Honestly, I must have been confused by the heat and press of the company inside when I agreed to this. What could I possibly have seen in you? Whatever it was, rest assured I have regained my wits.” She snapped her teeth at him like a tigress suddenly and Dumphrees leapt back in alarm. She laughed harder. “Be gone, toad.”

Dumphrees stalked off in a huff. Roger watched as his damsel in distress adjusted her clothing. She didn’t seem to be too perturbed by her encounter with Dumphrees. There was a curious sort of satisfaction in her expression and her movements. “Are you going to stand there staring at me all evening?” she said archly, putting her hands on her hips as she regarded him. He saw the moment her regard went from amusement to calculation. “You could do more than stare, you know.” She turned and showed him her back. Her dress was partially undone. “You could do something with this.”

Roger met her look with calculated regard of his own. Apparently there
had
been a tryst awaiting him in the woods. “I might be tempted.”

And there it was. The opening Harry needed. She couldn’t tolerate Dumphrees’s touch, but this man reminded her of her childhood hero, a shadowy version of the knight of her
dreams when she’d grown to adulthood. Those fantasies were long gone now, but surely she’d find his touch inoffensive? It was imperative she find a man she could stomach if her plan was to succeed. And it must. Faircloth was becoming more and more insistent.

She pasted on a smile, her insincerity causing a burning in her stomach and an increasingly insistent pounding in her temples. “Well,” she murmured delightedly. “What a handsome devil you are.” She put every ounce of mummery she could in that smile as she waved him closer. She didn’t trust her feet to carry her the few steps across the clearing.

His smile never wavered as he walked over and bowed before her. “And you, my lady, are exquisite. What shall I call you?” She held out her hand and nearly cried out with relief when he took it in his and kissed her wrist and she felt none of the revulsion she usually did at that type of familiarity from men.

“Why, friend, of course,” she replied, hanging on to his hand longer than was proper. He raised a brow as he regarded her in surprise. Surely he could see her interest was more than friendly? Most men fell all over themselves for even that simple contact with her. She had every intention of offering him far more.

“It’s always nice to make a new friend,” he said softly, and for the first time in years she felt the sharp bite of attraction. She ruthlessly tamped it down. Tears sprang to her eyes but she blinked them back. She didn’t have the luxury of genuine desire or emotional attachments anymore. She had a son and her independence, and she wasn’t going to give up either one of them. She’d earned them over the last seven years. If she had to ruin herself to keep them, then by God that’s just what she’d do. This was about survival, not lust and certainly not love. Those useless emotions had gotten her nowhere
in the past. Although, with this handsome lothario her plan seemed much more palatable than it had yesterday when she’d had no candidates in mind for her ruination.

“Yes, it is,” she was able to say honestly, her voice a little husky from emotion. She delicately cleared her throat. “And how shall we celebrate our new friendship?” She smiled again, letting him believe it was desire that prompted it, narrowing her eyes and licking her lips. He was no different from other men. His eyes tracked her tongue as she glided it along her upper lip slowly. “I was wrong,” she said, lowering her voice just a little bit more, adding a breathless quality that had his eyes dilating. “You are even more handsome than the devil.” And he was. His hair was black as a raven’s wing and worn in the latest style. She’d always preferred dark-haired men. The short cut emphasized his classical features. He looked like Adonis. He was tall and broad, carrying his masculinity like a standard announcing his arrival. The size and strength of him made her quite, quite nervous. His gorgeous eyes and the dimples in his cheeks gave her pause. She’d known someone once who looked like him.

Bittersweet Sixteen (A Dodie Jenks Novel) by Lexi Witcher
Fractured by Amanda Meadows
Fly Away by Patricia MacLachlan
The Recovery by Suzanne Young
The Brave: Param Vir Chakra Stories by Rachna Bisht Rawat
The Dust: Book Three - Sanctum by Sharp, David H
Dancing Barefoot by Wil Wheaton
A Woman of the Inner Sea by Thomas Keneally
The Tibetan Yoga of Breath: Breathing Practices for Healing the Body and Cultivating Wisdom by Anyen Rinpoche, Allison Choying Zangmo
The Explanation for Everything by Lauren Grodstein