Read The Singer of All Songs Online

The Singer of All Songs 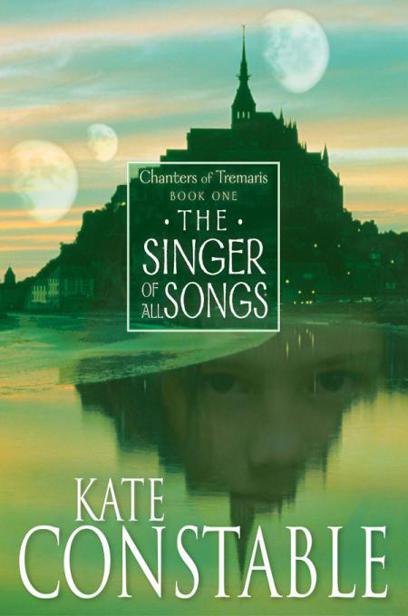 K
ATE
C
ONSTABLE
was born in Victoria but spent much
of her childhood in Papua New Guinea, without television but
within reach of a library. She studied Arts/Law at Melbourne
University before working part-time for a record company.
The Chanters of Tremaris series has been published in the USA,
Japan, Denmark and Slovenia. Kate now lives in Melbourne,
Australia with her husband and two daughters.

Praise for the Chanters of Tremaris series
‘I am such a hugh gigantic big fan of the Tremaris series! I read
The Singer of All Songs
and
The Waterless Sea
ten times each.’

All rights reserved. No part of this book may be reproduced or transmitted in any form or by any means, electronic or mechanical, including photocopying, recording or by any information storage and retrieval system, without prior permission in writing from the publisher.
The Australian Copyright Act 1968
(the Act) allows a maximum of one chapter or ten per cent of this book, whichever is the greater, to be photocopied by any educational institution for its educational purposes provided that the educational institution (or body that administers it) has given a remuneration notice to Copyright Agency Limited (CAL) under the Act.

The Wall of Ice

The Clarion of the Flame

The Song of the Trees

one
The Wall of Ice

L
ONG BEFORE SUNRISE,
even before the first faint blush of gold had touched the snowy peaks that ringed the valley of Antaris, the bells began to peal. The sky was still dark overhead, and the three moons sailed silver-bright between fading stars as the priestesses gathered under the cloisters. A hundred women shuffled and rustled in their yellow robes, their breath rising in puffs of mist into the cold air.

The sisters did not whisper to one another. Shivering, they drew their shawls over their heads and nodded in silent greeting. It was forbidden for any of the Daughters of Taris to use her voice on this day, unless to do the work of the Goddess. But the quiet footsteps of the priestesses on the stones of the courtyard and the swish of their robes made a kind of wordless murmur beneath the steady clang of the bells.

Slowly the sky began to lighten. By the pond, the ducks shook out their feathers; the goats bleated, rubbing their bony heads against their pens. Sunlight crept down the wooded slopes of the valley in a wash of gold, and the snowcapped mountains sparkled pink and blue-white. But the orchards, the river and the walled gardens, the grey stone Dwellings where the priestesses lived, and the villages and cottages of the ordinary folk of Antaris, those who had no gift of chantment, were all in cold shadow.

In the courtyard, the sisters turned their faces upward, to the square of pale sky that framed the three moons, strung like beads on some invisible thread. Steadily they breathed. The chilly air burned their nostrils and lungs, but they didn’t falter. In and out, to the rhythm of the bells, they breathed together. Some closed their eyes and swayed a little, back and forth; others held up their hands as if to gather in the air and the power that it held.

Nine times a year, the three moons, the Lamps of the Goddess, sailed full in the sky; nine times the sisters set out for the Day of Strengthening.

The first time Calwyn helped perform the ritual, two years before, she’d stayed awake all night, too full of pride and nervous anticipation to sleep. But she was sixteen now, almost a full priestess, and the idea of a long day’s walk and chantment, all on an empty stomach, no longer seemed as enticing as a festival. She wriggled her toes in the narrow strip of warmth under her bedcovers, calculating the last possible moment she could wait to get up before Tamen would notice her absence. Would it really matter if the Wall did melt away? She had never seen any attackers from the Outlands lurking in the forests.

Even the traders, who came every year to bring goods from the lands across the mountains, were far from being bloodthirsty invaders. Indeed, they seemed reluctant to be in Antaris at all, uneasy for every moment they spent within the Wall, always struggling for breath in the unfamiliar thinness of the air, jumping with fright at the sight of any yellow-robed sister. The only time Calwyn ever saw a look of happiness on an Outlander trader’s face was at the end of their stay. Last year she and the Guardian and some of the other priestesses had led them back to the Wall and had sung the spell of unmaking, to melt a gap in the ice through which they could squeeze themselves and their handcarts, laden now with precious honey, herbal medicines and fine woven cloth. When the crack was sealed up again behind them, Calwyn heard a great pent-up rush of laughter from the far side of the Wall. the nervous laughter of those who have managed to escape from death, and can’t quite believe their luck. The memory made her smile. The Outlanders feared the magic of Antaris, and they were right to fear it.

As the last echo of the bells died away to silence, Calwyn threw back the covers and leapt out of bed. Pulling on loose trousers and a soft yellow tunic over her undershirt, she ran down the stone steps toward the cloisters, braiding her long dark hair into two plaits as she went. If she was lucky, she could slip into the back of the crowd without Tamen or Marna seeing her. Down the steps and out into the chilly courtyard she ran, with her boots still unlaced, stumbled, tripped and cannoned into the tall upright figure of Tamen herself, the Guardian of the Wall.

A warning finger rose to Tamen’s lips as she gave Calwyn a cold glare and pointed silently to the throng of women who stood breathing as one, the cloud of their sighs rising toward the dimming moons and the slowly brightening sky. Calwyn bent to her shoes, glad to hide herself from that forbidding stare, and relieved that, for today at least, the Guardian was silenced by the ceremony. Perhaps by the time they returned at nightfall, Tamen might have forgotten to be angry, and she would escape yet another lecture. Perhaps.

The Penderwicks in Spring by Jeanne Birdsall
Dahmer Flu by Cox, Christopher
Mary Tudor by Anna Whitelock
Just Another Day at the Office by Lacey Kane
Dead Life (Book 2) by Schleicher, D. Harrison
Echoes in the Darkness by Jane Godman
The Judgment by Beverly Lewis
Sea Change by Aimee Friedman
Get Happy by Mary Amato
The Legacy by Katherine Webb