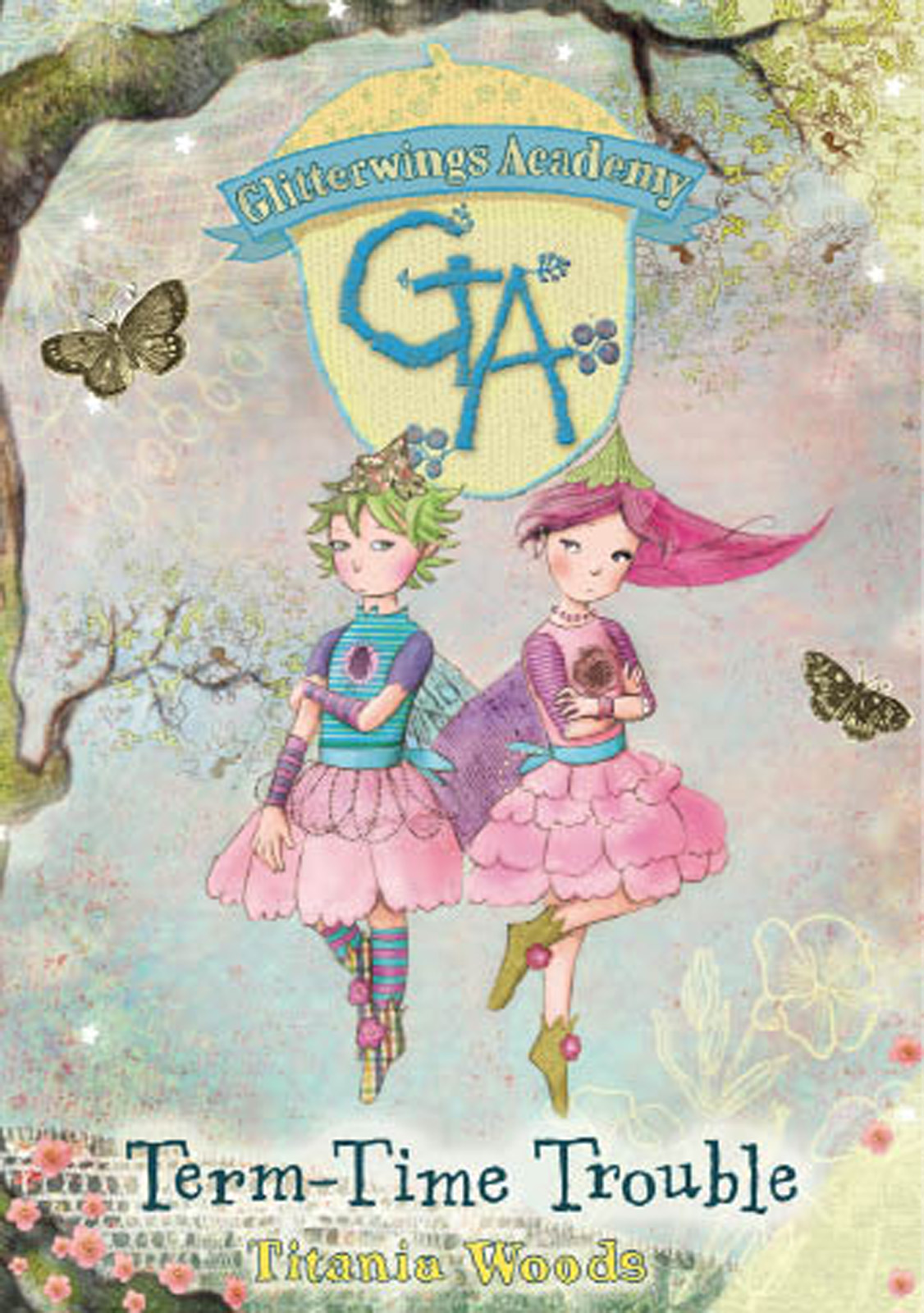 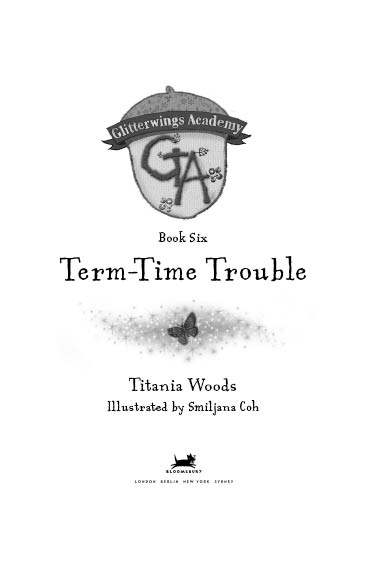 To Susan and Chuck 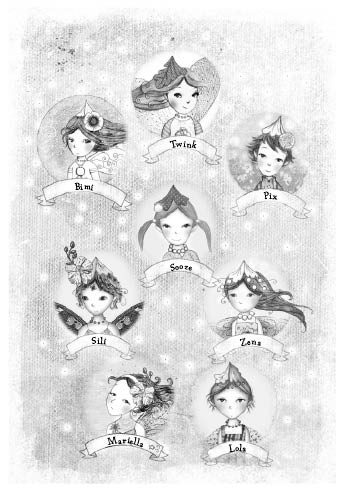 Twink Flutterby groaned to herself as she flew along behind her parents. The rain had been drumming down all day, and showed no signs of stopping. What an awful start to the new term!

â
Everything
is getting wet,' grumbled Twink, adjusting her rose-petal umbrella. Beads of silvery rain formed on its edge, racing off it like pearls. Twink shook it grumpily. âI bet Glitterwings has floated away by now.'

Her father laughed. âOh, I think you'll find it's still there. Your school has seen worse rain than this in its time!'

Twink's spirits lifted as Glitterwings Academy came into view. The massive oak tree sat calmly on its hill, its rich green leaves shiny with rain. Hundreds of tiny gold windows spiralled up its trunk, and a grand double door sat at its base, looking bright and welcoming despite the dampness.

For a change, though, there were no clusters of young fairies buzzing about the tree â it was far too wet for them! Instead, an oak-leaf pavilion had been set up on the front lawn for the returning students. Twink and her parents swooped inside it and landed thankfully on the dry grass. Everywhere Twink looked there were soggy fairies!

âAren't you going to tell us how beautiful Glitterwings is in the summertime?' Twink's father teased her mother as the rain pattered loudly overhead. Twink's mother had gone to Glitterwings herself as a young fairy, and tended to wax nostalgic whenever she saw the school again.

She laughed. âWell, it is â but I do like it better in the sunshine!' she admitted.

Looking around, Twink caught sight of a thin fairy with light blue wings called Lola, standing with her mother. Lola was a second-year fairy like Twink, and the two of them had been in the same branch since Twink's first term.

Even so, Twink hesitated when she saw Lola. Nobody really liked the washed-out little fairy very much â she was the only friend of a perfectly horrid fairy called Mariella, and nobody
in their right wings could
like Mariella!

âIsn't that girl in your branch?' said Twink's mother, noticing her too.

âPoor thing, she looks so sad!' said Twink's mother. âWhy don't you go and say hello to her while we register you with Miss Sparkle?'

Lola, sad? The thought had never occurred to Twink, but looking at Lola now, she could see what her mother meant. Lola's blonde hair looked damp and stringy, and her mouth was turned down in an unhappy grimace.

âGood girl,' said her dad. His expression told her that he understood her dilemma, and was proud of her for doing the right thing.

Warmed by the thought, Twink smoothed back her pink hair and flitted through the crowd towards Lola. She slowed down as she drew near, becoming uncomfortably aware that an argument was taking place between Lola and her mother.

âMum, you're not being fair!' Lola beat her wings fretfully. âI've told you over and over â'

âYou'll do as I say,' said Lola's mother, a large fairy with powerful-looking wings and a firm mouth. âI don't want to discuss it again, and that's that!'

âBut you're not even listening!' Lola looked close to tears. âI
hate
it, don't you see? I gave it a chance like you said, but â' 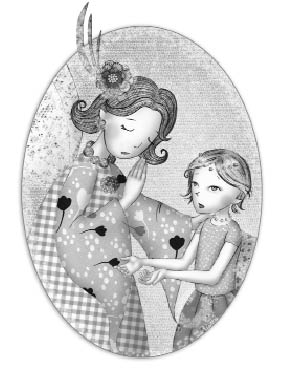 âNonsense!' boomed Lola's mother. âOf course you don't hate it. Now, have a good term, and write every week. And I expect much better reports from your teachers this term!'

Lola stared down at the ground. âYes, Mother,' she mumbled.

Twink watched as Lola's mother flapped away, wondering what the argument had been about. Poor Lola! How awful to have a mother who bouldered right over you like that.

Lola's head jerked up. Hastily, she drew a hand over her eyes. âOh. Hi.'

âGreat.' Twink's voice sounded weak, even to her own ears. She
had
had great hols, but now didn't seem the time to go into the details. She struggled to think of something else to say.

â
There
you are, Lola â I've been looking everywhere for you!' A fairy with silvery-green hair and pale green wings landed beside them and tucked her arm through Lola's. She narrowed her eyes at Twink. âHello.' 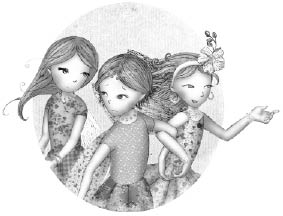 âHi, Mariella,' said Twink wearily. She and Mariella had reached a truce of sorts last term, as they both played on the school's Fledge team. Even so, she couldn't truthfully say that she liked the pointy-faced fairy very much.

The feeling was clearly mutual. Lifting her nose in the air, Mariella tugged at Lola's arm. âCome on, Lo, let's go and catch up. I hardly heard from you all hols!'

Lola hesitated. âYes, but I've just got here. I need to go to Peony Branch, and â'

âI've already saved our old beds for us,' said Mariella impatiently. âCome
on.
'

She dragged Lola away through the crowd. Watching them go, it struck Twink that Lola hadn't seemed very pleased to see Mariella.

How strange â they're supposed to be best friends!
she thought in surprise. Maybe they'd had a row.

Then she forgot all about Lola as a familiar voice called her name. Whirling about, Twink saw her own best friend, Bimi Bluebell, flying towards her. The two fairies embraced with shrieks of delight.

âIt's so good to see you!' cried Twink.

If Bimi weren't so nice, Twink often thought she'd be too shy to even speak to her â for Bimi was easily the prettiest fairy in the school, with her dark blue hair and shimmering gold and silver wings. But Bimi was the best friend in the world, and not stuck-up in the least.

âGuess what?' Bimi fluttered her wings madly, almost lifting off the ground. âMum was talking to Miss Shimmery, and it's official â we're going to have a term of Sparkle Art!'

âOh, hurrah!' cried Twink. She had hoped for ages that the school would find a Sparkle Art teacher. Fairies loved anything that sparkled, and creating works of
art
that sparkled sounded like excellent fun!

Just then Twink saw her mother waving at her from across the pavilion. She tugged Bimi's hand. âCome on, let's say goodbye to my parents before they leave.'

The two friends flitted through the crowd arm in arm, giggling as they tried to avoid bumping into other fairies. Twink sighed happily. Rain or not, she could tell already that it was going to be a perfectly glimmery term!

After her parents had left, Twink and Bimi took their bags and darted out into the rain, squealing as they shot through the open double doors at the base of the oak tree.

The inside of Glitterwings Academy was a high, golden tower that stretched up as far as the eye could see, with branches shooting off in all directions. Fairies darted in and out of the branches, laughing and calling to each other. Twink smiled. Oh, it was glimmery to be back! No matter how many terms she'd spent at Glitterwings, it still looked magical to her.

âYou're such a slow-worm!' laughed Bimi, nudging her with her wing. âHurry, let's get to Peony Branch â we want the same beds as last term, don't we?'

The two fairies leapt into the air. Spiralling quickly up the trunk, they passed dozens of sleeping branches, along with empty classrooms filled with red and white spotted mushroom seats. Finally, near the top of the tree, they came to a branch with an upside-down peony hanging over it.

A curving branch lined with soft mossy beds met her eyes. Over each bed hung a sweet-smelling peony, and cosy bark cabinets were tucked away here and there. Normally sunshine spilled into the branch, but today there were only grey, streaky shadows as the rain pattered down the arched windows.

Twink's face fell. Her old bed had already been taken! An unfamiliar fairy with spiky green hair sat on it, reading a petal mag.

âI don't know,' Twink murmured back. They had been with the same group of fairies since they started school â were they to have a new girl now? 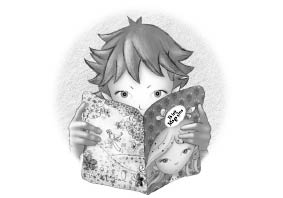 A clever red-haired fairy called Pix flitted over to them. âWe tried to save your usual beds for you two,' she said, âbut
she
wouldn't move!' She gave the fairy with green hair a hard stare. The fairy flipped a page of her petal mag without even glancing up.

Twink and Bimi looked at each other in disappointment. They had loved those two beds on the end last term â it was lovely and private off to the side, plus there was an extra cupboard.

Finally Twink shrugged. âWell . . . she got here first, I suppose.'

Bimi nodded with a sigh. âWe can take those two beds in the middle.'

âIt's funny that she wouldn't move, isn't it?' whispered Twink as they started to unpack. She knew that if she'd been a fairy in a new school, she'd have wanted the other fairies to like her. Refusing to give up her bed to girls who had been there for ages wasn't a good way to go about it.

Overhearing her, a yellow-haired fairy called Zena flitted over. âShe's called Jax, and she's
awful
,'
she hissed, flapping her orange wings.
âI don't know what we've done wrong to get saddled with
her.
When we already have Mariella and Lola, too!'

âWhat's so awful about her?' whispered Bimi, her blue eyes wide.

Zena made a face. âJust try talking to her. Everything about Glitterwings is rubbish, according to her!'

The Return of the Discontinued Man (A Burton & Swinburne Adventure) by Mark Hodder
Descent07 - Paradise Damned by S. M. Reine
How the French Won Waterloo (or Think They Did) by Clarke, Stephen
Not Broken: True Destiny, Book 5 by Dana Marie Bell
Driven by K. Bromberg
Covenant by Crawford, Dean
Kiss Kiss by Dahl, Roald
Absolute Hush by Sara Banerji
A Shroud for Jesso by Peter Rabe
It's Bliss by Roberts, Alene