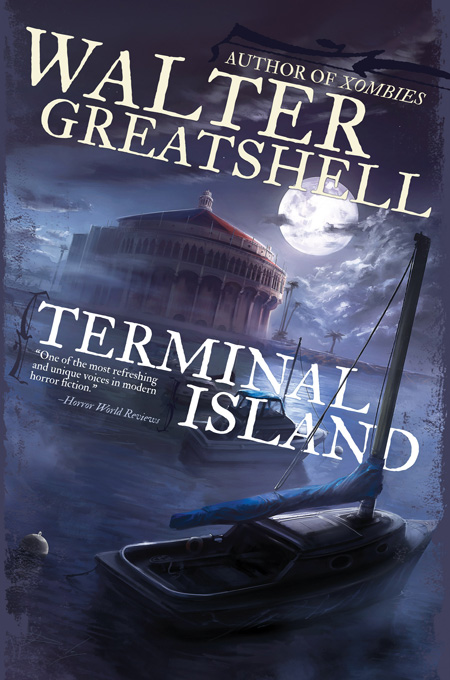 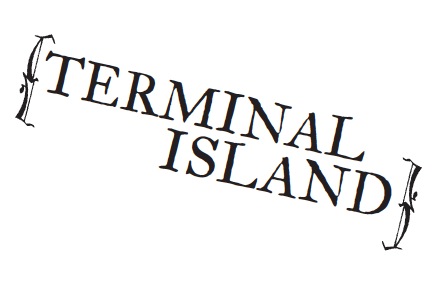 Other books by Walter Greatshell

“The Mexican Bus,” from
The Living Dead 2

This edition of
Terminal Island

I
n this game you’re always on the move. It’s like fighting a fire: stay ahead of the flames, don’t trust the floor, and don’t leave anything smoldering—kill it dead. But no matter how careful you are, there is always an element of chaos. Or fate, if you prefer, in which case we’re both just actors on some cosmic stage. Do you believe in free will? Lord knows there were many times I kicked myself for taking on this thing, but I couldn’t stop. That’s government work for you, though: always just a little too good to pass up. As a private contractor you can’t always count on a steady paycheck. But this has become more than a job to me; as they say in the movies, this time it’s personal.

You know how many people I’ve killed to find you? How many fanatics and fools have tried to stop me? Dead fools, now. But you people are like heads on a Hydra: cut one off and five more pop up. That’s okay, I like a challenge. You might say I was born for this work. Your mistake is that you forgot about me; you got too comfortable. You got old.

Hell of a place you have here, hell of a place. Look at that view! Did you think nobody could find you out here? Or have you been looking out over the ocean all these years wondering when somebody like me was going to finally show up at the door? I bet you have. Look at you: I bet you’ve hardly gone outside in twenty years—you’re a ghost. That’s why it’s such a tomb in here, isn’t it? You’ve gotten to like the dark, you and her, living like bugs under a rock, surrounding yourselves with this freakshow that would give anyone the creeps. You’ve turned paradise into your own private nightmare, you dumb shit. Open the curtains for God’s sake, let in some sun. Sorry to hurt your eyes. Take a breath of fresh air in case it’s your last.

Believe it or not, I’m a pacifist by nature, but I’m not afraid of a little blood—you can’t be squeamish in this business, and I been doing it a long time, long enough to know that the human body is a flimsy sack of guts, all too easily ruptured and spilled, and the sooner you remind a man of this, the sooner he is likely to be forthcoming with useful information.

Also it doesn’t hurt to look like I do. This face has a tendency to make little children cry…and sometimes grown men, too. That’s why I like having a teenage girl make my phone appointments—it makes some guys more inclined to take a meeting, if you know what I mean. You spoke to my assistant, didn’t you? I call her my own personal Siren—that sweet voice has lured a lot of sailors onto the rocks. You’re not the first. They get all decked out like schoolboys about to lose their cherry, and it’s amazing how the blood goes out of their faces when they find
me
waiting for them—you can just about see their nuts shrivel up inside their bodies. Usually it doesn’t take much more than that to get them talking a blue streak.

Only thing I don’t like about this work is when tax time rolls around. It’s always a pain in the ass, what with all the travel expenses, vouchers, receipts, you name it, and I particularly don’t like having to define what I do for a living. Like most bald guys, I wear a lot of hats. In any given year I might pick up a few bucks working someplace like Iraq or Sierra Leone, or maybe I’ll handle personal security for some dignitary or corporate hotshot, or I’ll do a little private investigative work for select clients in the higher echelons of our government—a little headhunting.

I guess you’d know about that.

Is this what my parents died for, this little ivory statue? Is this your good luck charm? Your people out there seem to think so—they swore I’d never get near you while you had this thing. Did you also think it was protecting you? That’s a shame. Anyway, it’s mine now, my own American idol. And while we’re at it I also need names. I need you to I.D. these faces for me. I need phone contacts and offshore account numbers and file access codes. I need cold hard facts—solid evidence of everything you people are doing out here, the whole sick playbook. It’s the only way you’re gonna outlive your wife.

You may think that these things won’t be admissible in court, fruit of a poisoned tree and all that, but we’re not following strict legal channels here. I’m just a private citizen doing his patriotic duty. Consider it a family matter. As for the old lady, she shouldn’t have tried to cut me—I don’t like to kill senior citizens, not even ghouls like her.

So talk, old man. Speak to your long-lost nephew. Unburden yourself while you still can. I’m giving you five seconds to decide, and then I tape your mouth and flick on the old Zippo. Your next chance won’t be for ten long minutes. Yes? No?

R
unning. The two of them running in the spotlight with nowhere to hide. Dark cliffs above, a dark sea below, and a paved ledge of a road in between. No escape from that insane glare, which follows them like the beam of a giant magnifying glass—a magnifying glass in the hands of a sadistic child—

Blink and it’s broad daylight. Night is replaced by the early morning hubbub of a departure lounge—he’s been daydreaming again. Henry Cadmus is taking his family to Catalina Island to visit his mother.

He’s said it aloud a few times already, to people at work and the stewardess on the plane from Chicago, but it still doesn’t sit right.

Hey, I’m only taking my wife and daughter to Catalina Island to visit grandma and do a little sightseeing—what’s so weird about that?
That’s better.

Weird?—nothing. The answer is nothing at all. It’s a perfectly ordinary thing to do—just look around the ferry terminal at all the Labor Day tourists and daytrippers with their beach gear. No big deal. So why is his stomach wrung tight as a wet dishrag?

“What? Sure—
sure
.” Henry smiles reassuringly at his wife’s HD camcorder, embarrassed to be caught in a private moment. Ruby is his soul mate, his savior, the light of his life, and even after five years of marriage he’s still blown away by her creative energy as well as her darkly angelic beauty, but right now he could do without her need to compulsively record their lives for posterity, as if in her husband’s personal traumas she sniffs an Oscar for Best Documentary. That’s what he gets for marrying a younger, cooler woman. An
artist
.

“Just a little jetlagged, I guess,” he says.

“Are you sure that’s all it is?” The camera zooms in close.

Oh come on
. It’s his own fault for being a sucker for art. Even before Henry fell in love with Ruby, he had been seduced by her taste in paintings: the walls of her alternative therapy practice were decorated with dark Goya prints, violent and alarming pictures that acknowledged the horrors of life and thus made slightly more bearable his chronic pain. Between the pictures and the candles and the slightly eerie, atonal music, Ruby’s studio was such an immediate relief from the clinical white hell of the VA medical center that Henry had pointed to Goya’s black Sabbath and joked,
I think I need a witch
. To which Ruby had replied,
You’re in luck
, cheerfully explaining that she was actually a lapsed Wiccan priestess—a fact later proven by her twining Druidic tattoos and discreet body piercings.
Guess I went a little crazy in college, huh?

Henry loves that about her, the casual laughing-off of the awkward past. It is something he would like to be able to do himself, especially right now, when his own idiotic demons are scratching at the door. It is almost time to start boarding the boat. Throwing Ruby an Oedipal bone, he says, “It’s just my mother. The usual.”

“It’s just weird to have to track her down like this; she’s never done it before, just moved without telling me or anything. Not answering my letters. Obviously she doesn’t want to talk to me.”

“Well, it’s not like you haven’t done the same thing to her,” she says brightly, holding the camera in one hand and their leashed toddler in the other.

“Yeah, but…” He shakes his head as if to disperse the reflexive spasm of guilt that comes with anything having to do with his mother. “This is not like her, though. To just disappear and not tell me. Who knows what kind of crazy scam she’s mixed up with this time—I keep thinking of that phony Mexican property she bought a few years back. By going there we might get stuck bailing her out again.”

“God, this carpet is filthy,” Ruby says, zooming in on Moxie’s black-smudged hands and knees, then panning across the foot traffic of the departure lounge as if to emphasize the parade of filth. The smut underlying the sunny myth of the California Dream. “Maybe your mom’s just trying to show you how it feels to be cut out of the picture. You know what a shock it was to her when you moved away.”

“That was twenty years ago! I’m a middle-aged man, for God’s sake.”

“Not in her mind.” Wrestling the uncooperative toddler, Ruby says, “Some help!”

“Oh, sorry.” He takes the wipes from her bag and goes to work.

“My guess is she’s just giving you a taste of your own medicine.”

“But that’s not fair, I have a right to my own—” Henry stops himself, disengaging from the well-worn groove. His wife is just baiting him anyway, for dramatic purposes. “Hey, whose side are you on?” he asks.

“Oh, thanks. Thanks, that’s what I need: a viper in my bed. Anyway, I don’t think so. She’s too needy to pull off something like that for long—if she was doing it out of spite, she’d have caved by now and sent me a big ranting letter. You’ve seen her letters; she’s never been one to suffer in silence. This is something new.”

“You know what I think?”

Prisoner (Werewolf Marines) by Lia Silver
Make Me by Turner, Alyssa
King of the Godfathers: "Big Joey" Massino and the Fall of the Bonanno Crime Family by Anthony M. DeStefano
Witness Bares All by Abby Wood
The Last Dragonlord by Joanne Bertin
Kids These Days by Drew Perry
Rekindled by Maisey Yates
The Queen B* Strikes Back by Crista McHugh
Old Friends, New Lovers (Regular Sex Issue 7) by Kitty French
Misfortune: Christmas With Scrooge by Peggy Ann Craig