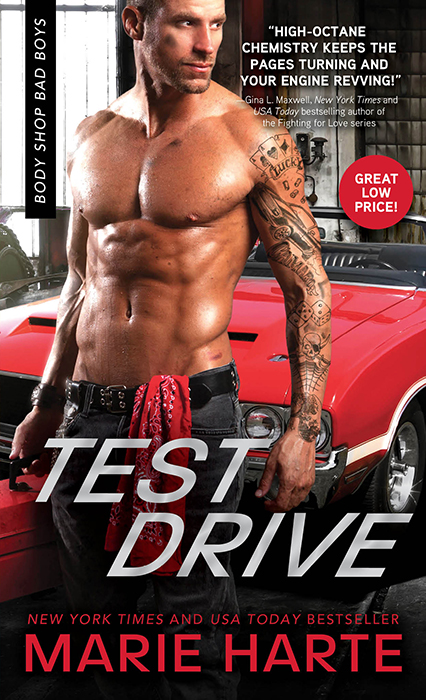 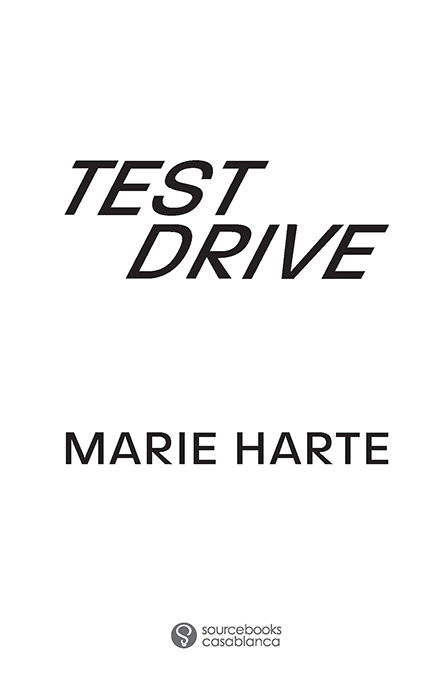 A Sneak Peek at
Roadside Assistance

A Sneak Peek at
A Sure Thing

To D & R. Maybe someday, God willing, my love of books will rub off on you.

And to Dad and Anna. Love you guys!

The opening riff of an old-school AC/DC song echoed through the garage. Johnny Devlin bit back a curse when he scraped his knuckles on the pump of the piece of crap Cadillac he was working on.

The smell of motor oil, sweat, and grease warmed the interior of Johnny’s favorite place in the world. Webster’s Garage boasted a double set of bay doors and a roomy interior complete with a cement floor and red-and-brown brick walls, a holdover from the original Tooley’s Auto Shop.

“Hey, asshole,” he heard Foley snarl. “We talked about this. Hands off my stuff.”

Best buds Foley and Sam were squared off, staring holes through each other. When it came to order—and pretty much everything related to cleanliness—the two thugs sat on opposite ends of the spectrum. Foley—Mr. Tall, Dangerous, and Arrogant—was compulsively neat, while Sam might as well have had the word
chaos
tattooed on his forehead. Covered in tattoos, Sam was a walking billboard for badassery.

Lou stepped over to the radio near his work station, and soon loud classic rock drowned out the rest of the argument.

Just another day at the office.

A cool breeze made Johnny sigh. Seattle’s unseasonably warm autumn temps continued to be a pleasant surprise this year, and they kept the garage doors open to let the air circulate through the sticky auto repair shop. Even at nine thirty in the morning, he had worked himself into a sweat.

Johnny cranked his wrench and stared at a stubborn pump assembly that refused to cooperate. He loosened it, got to the fan belt, then glared down at the problematic power steering pump.

After glancing over his shoulder to make sure he was in the clear, he softly muttered, “Shitty Cadillac.”

The sound of someone shaking a familiar glass jar of coins made him tense. He heard it again, even over the blast of AC/DC. Ducking deeper under the Cadillac’s hood, Johnny wondered who his sexy-scary boss was going to call out for cursing now. He was sure he hadn’t been that loud.

“Seriously, guys?” Delilah Webster held the newly purposed amber glass growler out to Sam and Foley. The woman had a hard-on for swearwords lately.

Such a sad waste of a perfectly good beer container. Once the half-gallon jar had been home to a killer IPA flavored with hops and a hint of citrus. Now, it was nothing but a no-swearing jar filled with goddamn quarters.

As if the shop going clean would prevent Del from slipping up at her wedding.

He imagined her dolled up in a white gown, tats, piercings, and her hair all done up in some funky twist, looking like a million bucks. She’d be glowing at her behemoth of a fiancé before letting loose with an “I
fucking
do.” With a snort, he buried himself back under the hood of the bastard of a car and did his best to calm his frustration. He never had anything pleasant to say before ten a.m. anyway. God knew he needed a jolt of caffeine, and soon, before he took a tire iron to the gray piece of crap he just
knew
was laughing at him.

Sam and Foley bitched about the new no-swear policy even as he heard them drop change into what Johnny had taken to calling the “Rattle of Oppression—ROP.” A few clinks of change against glass and everyone seemed to sink into themselves, anxious that their fearsome boss would come storming back in, demanding a quarter for a “hell,” “shit,” or “damn.”

Johnny knew better. Dubbed the smart one of the crew, he kept his nose out of trouble and everyone else on the straight and narrow. Mostly.

He heard Del step in his direction, grazed his already sore knuckle against the frame as he removed the assembly, and let it rip. “
Fudge.
”

“See?” Del yelled to be heard above a man on the radio screeching about shaking all night long. “At least
someone
can keep his friggin’ mouth clean.” She patted him on the shoulder, and he did his best not to flinch. Woman had hands like rocks. “Thanks, Johnny.”

He kept his head down and continued to tinker, listening as her footsteps gradually faded. Then an office door closed, and he found it safe to look up.

“You are
such
a kiss ass.” Sam frowned. Then again, Sam did nothing but frown.

Next to him, Foley crossed massive arms over a broad chest and made kissy noises. A glance across the garage showed Lou shaking his head, looking disappointed.

“What?” Johnny tossed up his hands. “Am I the
only
one smart enough to know you catch more bees with honey?” He smirked at the many middle fingers shot his way. “Thought so. Dumbasses.”

Of the four of them currently in the shop, Sam was the one whose temper could turn on a dime. He’d gotten better over the years, but everyone knew to avoid the brute when he sank into a rage. Only Foley could talk him down, the pair closer than most brothers. Lou had a sense of humor like Johnny’s, but without the quick wit—or so Johnny liked to constantly tell him.

Keeping on Sam’s good side would be the smart thing to do.

So of course, Johnny had to prod him. “Hey, McSteroid, you and your boyfriend got plans for tonight?”

Sam’s frown darkened. “Why? You got a death wish, stick boy?”

Johnny flexed a greasy arm. “Seriously? Stick boy? Man, I’m ripped. And it’s all natural.” He raised a brow at Sam and pushed his bicep up from the back, trying to appear bigger.

Even Sam couldn’t withstand the Devlin charm. A rare smiled appeared on his face. “Whatever. No, I don’t have plans. And Foley—not my boyfriend, dickhead—has his own life.”

“So.” Lou looked Foley up and down. “No plans for you then?”

Lou grinned. It took a lot to push the guy’s buttons. “Back at you, hombre.”

“I thought we’d hang at Ray’s if you losers have nothing better to do. Darts rematch?” Johnny offered.

“You’re on.” Lou looked eager. The only one of the group who gave Johnny a serious run for his money at the game. Intelligent, a real ladies’ man, and he had a steady hand. A useful trait for a guy who painted with great attention to detail.

“Cool.” Johnny gave them a thumbs-up. “Winner doesn’t pay for drinks. So make sure you idiots bring your wallets.”

“
Foley
,” Del snarled from the office door. “What the hell did I say about swearing?” The ROP had returned.

Johnny buried his head back under the hood of the car. He was pretty sure the others did the same. Survival of the fittest worked only if you let the weaker ones, like Foley, take one for the team.

A few hours later, he lounged outside on a picnic table, eating a sandwich Dale, their service writer, had picked up from their favorite shop two doors down. The rare sunshine, not marred by a single cloud, added to the perfection of the moment. A few birds chirped, cars buzzed down Rainier, and only Foley crunching on a huge bag of chips interrupted Johnny’s peace.

Foley glanced at Johnny’s third sandwich. “Where do you put all that food? You should be really fat.”

“You should talk. And just because I don’t spend my leisure time jerking off with weights doesn’t mean I’m not in shape. I like running.”

“From the law,” Foley muttered and crunched some more, a sly grin on his face.

“Nah. That’s in the past. The trick now is not to get caught.” He wiggled his brows, and Foley laughed. “I run after work, if you’re interested.”

“Nope. I’d rather ‘jerk off with weights,’” Foley sneered. “You know, with that smart mouth, it’s a wonder no one’s rearranged your face lately.”

“It’s been a few months,” Johnny admitted. He had a hard time going without a fight, cursed with an inability to keep his mouth shut around less intelligent, ill-humored people. “I’m not a half-bad boxer. Hence my ability to still breathe on my own.”

“I know. That’s the only reason Sam and I tolerate you. That and if we’re in a fight, we’ll throw them the runt and mosey off.”

Johnny laughed. Foley and Sam weren’t known to
mosey
away from anything. The badass bros, as he and the others called them behind their backs, ended more shit than Johnny ever started. That weird moral code the pair insisted on keeping often had them interfering when a smarter man would steer clear.

“You still dating Alicia?” Foley asked out of the blue.

“Nah. She got a little clingy.”

Foley sighed. “They all do.”

“I take it you and Sue are quits then.”

Granted, Johnny wouldn’t typically let a little thing like a woman kicking his ass stop him if he really wanted her. He’d charmed harder cases than Sue. But he didn’t want to break her heart, then have to deal with her when he went back to the bar.

Dead of Light by Chaz Brenchley
Senda hacia tierras hondas by Matsuo Bashô
Man From the USSR & Other Plays by Vladimir Nabokov
Sacrifice: The First Book of the Fey by Rusch, Kristine Kathryn
Chance to Be King by Sue Brown
Las hijas del frío by Camilla Läckberg
Crime at Tattenham Corner by Annie Haynes
Cures for Hunger by Deni Béchard
The Life of Anna, Part 3: Embraced by Marissa Honeycutt
A Rose Revealed by Gayle Roper