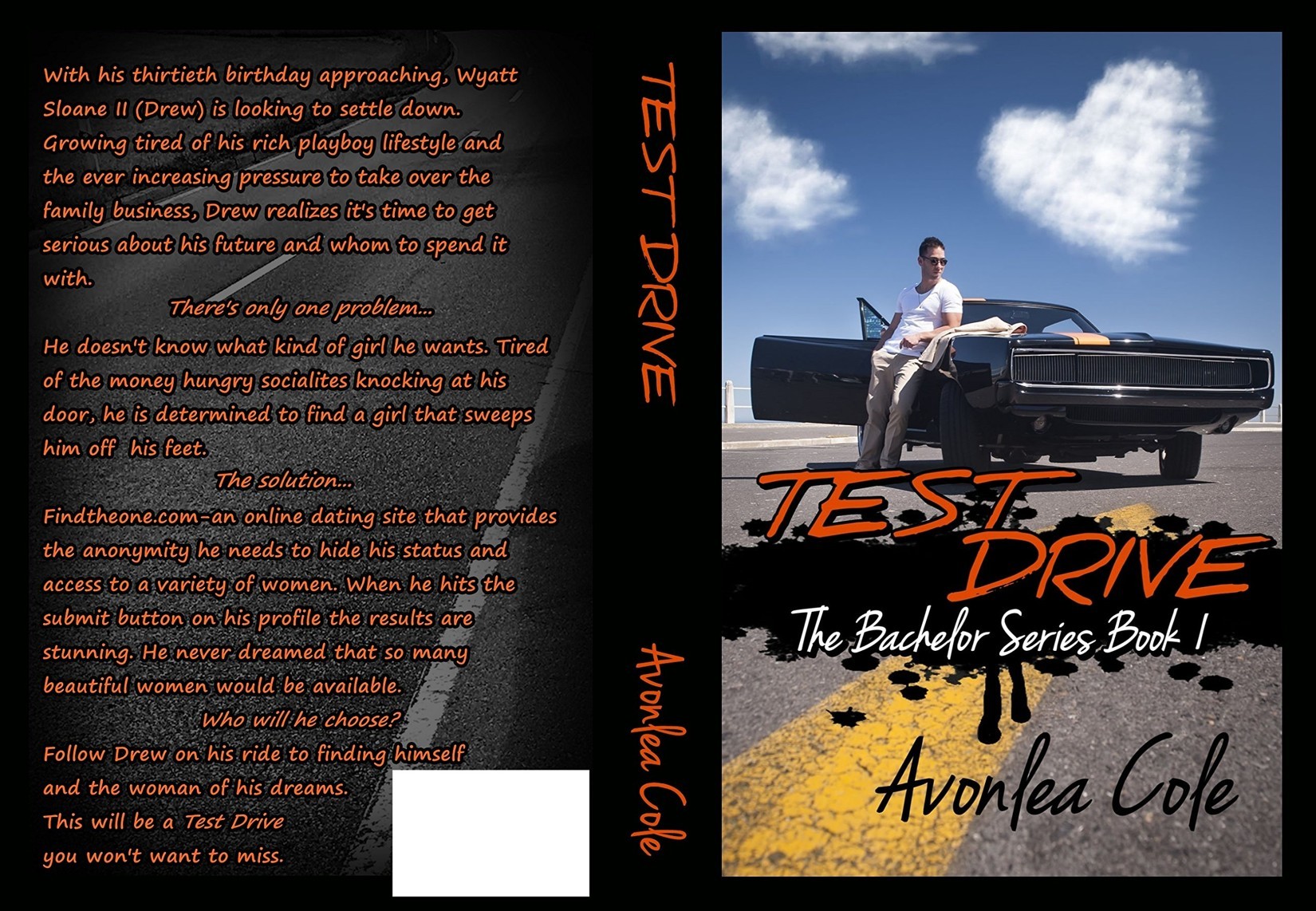 This book is a work of fiction. Any similarity between the characters and situations within its pages and places or persons, living or dead, is unintentional and co-incidental.

"HI! MY NAME IS .
. .” No, that’s not right. "Hello! I’m Drew, and I’m looking for love!" Ugh, I let out an exasperated breath and deleted the lines once again. When had it come to this? Putting an ad on a local site to try to find just one girl I could spend some time with; one I wouldn’t despise after just a few weeks of dating. Well, before you pick up your pitchforks, let me explain. My story isn’t all cupid and fairytales.

My real name is Wyatt Andrew Sloane II, but you can call me Drew. I could be called wealthy, not rock star wealthy, but I have my own plane. My parents happen to own a whole fleet of planes and the family business is doing . . . umm . . . well. Now most of you might think that being rich is easy; like I just float around on clouds all day drinking martinis, but the real story is that I spend most of my days ignoring phone calls and deleting emails from the many women out there hoping to land a wealthy benefactor.

My parents met before the money flowed in. My dad was a pilot, and my mom was a flight attendant so you can imagine how their love story played out.
I want that.
I want to find a woman that sweeps me off my feet like in the love stories, but the trouble is—I don’t know what kind of girl I want.

It hit me a few weeks ago after a rough break up with my most recent girlfriend Camille. She cried, and well, I stood there like an idiot saying it wasn’t her, it was me. I really meant that though. I am sure one day this super-hot model was going to take some guy by the balls and make him hers. Not me though. I want something else. It wasn’t until I was recovering at a local bar with my friend, Matt, that I realized that I had it all wrong. The last five girls I had dated since high school were all socialites, that fashionista princess type that thought the best date was sitting by a runway picking out her "wedding dress" for our marriage that I hadn’t even asked for. Whoa, right?

Matt had a great idea. "Hey dude, you should get on one of those sites—you know the dating ones? I wouldn’t say who you are though. Just try some new girls, like test driving a new car?" His arm extended as he navigated the imaginary steering wheel through the crowd of patrons. Brilliant, right? Suddenly I had a plan. I planned to find different types of girls; maybe dating them briefly, but ultimately I wanted to find someone who meant something to me. Maybe I’d be into cowgirls, yeah, maybe the ones with the boots and the sexy hat. Or maybe I needed an ambitious woman who could fend for herself? I wanted to get started immediately, but I didn’t think in my buzzed state of mind that my profile would be very attractive so I put the plan on hold for a day or two.

And now here I sit trying to type my name for God’s sake. If I can’t make it past this part then how in the hell am I going to put enough
non-loser
things in there to attract the right kind of girl, whoever she may be? I had to get my game together. I didn’t want to feel so pressured, but with my parents pushing for me to settle down and my thirtieth birthday rolling in, my days as a rich playboy were numbered.

I put my hands on the keyboard and began to type. The lines flowed . . .

"Hey ladies! My name is Drew. I am a twenty-nine year old business man looking to settle down." Thankfully the list of questions provided gave me a guideline to go from. What types of personalities do I like in women? Hmmm, I had no response. I decided that was the best way not to limit the responses. "I am not sure what kind of woman I want, obviously
,
the basics like loyal and committed, but beyond that
,
I am open."

My Best Feature: "Ha! What’s not to like?" I smirked to myself. "I am very outgoing
.
" That seemed good enough.

My Favorite food: Duh! "Pizza
—
not just any pizza
—
New York style pizza with all the toppings." I hit the next button before I changed my mind. Honesty was so important with these questions, and well, what guy doesn’t love pizza?

I answered what seemed like a bazillion others. I finished the forty-page questionnaire and went to upload a picture for my profile. I stopped short deciding against anything with an airplane or mansion in the background. I knew it would be necessary to rent another house since bringing them home to my wing of the million-dollar mansion was out of the question.

I uploaded a picture I had taken at a charity event not long ago. You couldn’t tell where I was, but I was wearing a T-shirt, jeans, and boots. As soon as I hit the
complete profile
button, my screen froze. "You have got to be kidding me." I said out loud to a thankfully empty room.

The computer took a few minutes to load, and my patience was ready to give up on this dating site altogether. There must be other ways like speed dating or maybe the mall? Both ideas sounded horrible even as the thoughts crossed my mind.

Finally the screen came back to life, and I realized why it took so long—there were forty-seven pages of potential matches. Maybe I should have been more specific. I popped the top on a beer and sat back in my chair. This was going to take a while.

The site allowed you to
X
off anyone you didn’t like and
Like
the ones you wanted to want to revisit. I won’t lie, some of the people that came across the screen were not my type, and I could see that immediately, but there were quite a few that caught my eye. I made it through about twenty pages before my eyes started to cross and the girls started to look like blurs of bleach blonde hair. I decided to get up and stretch. I made a trip down to the kitchen and made a sandwich.

It was about nine thirty p.m. and usually I’d just be leaving the house to go meet some friends, but today I was on a mission. Who would have thought that searching for girls would be so hard? Forty-seven pages, really?

I returned to my computer with a fresh beer and a full stomach. I sat down and began to click. It took another hour to finish narrowing down the list, and by the end, I had six pages—over 30 women—of likes. Again I knew that was too many. I decided to narrow it down to ten, and who knew if they would even respond. I began clicking on the profiles. I took a few more off based on their questionnaire.

Amy, the dentist, put that she was a total neat freak and wanted a man who shared that trait. Nope—next. Candy, retail associate, totally loved blah blah and Gucci. Next.

Chelsea, the pediatrician, put that she loved kids and helping people in need, even did some volunteer work. Maybe. I clicked on her picture. She was a tall woman with black hair. She wasn’t wearing a lot of makeup, and she was wearing her lab coat with a collared shirt. She looked smart. Nothing wrong with smart and caring. I quickly sent her a message to contact me and moved on.

I rolled through a few more that were
X’d,
and I started to feel like maybe I was being too picky. Next up was Jenna, the yoga instructor, says she loved anything to do with competition and extreme sports. She even used to be on the US ski team before an injury. Her long blonde hair hung to her waist in one picture where she was posing with some other instructors. A few others showed her rock climbing and sky diving. It was kind of hot! I sent her a message and continued my search.

It was kind of fun looking at all the answers the women had put. Some put my answers to shame. Next up was Violet. I almost hit the
X
button when I saw the cross and the word "virgin" pop up, but I held off. She looked sweet. And even though she wasn’t my type in several ways, the whole point of this site was to meet someone new. I had begun copying and pasting the messages as it took too long to write individual ones.

Then there was Sarah, Tammy, Allison, and whatever the hell Kamya was. Another set of girls that were too far out there. I stopped on Victoria. In her picture she was holding one small, beautiful little girl. The thought of children scared the hell out of me, but she seemed nice in the picture, and eventually I wanted kids so I needed the "motherly" type. I sent her the copied message.

The next profile caught my eye for several reasons. The picture showed a girl looking down at the ground. Her face looked sad, like she was grieving someone or something. I couldn’t say why I wanted to meet her. Maybe it was to take the pain away or see if somehow I could help? I messaged her and leaned back in the chair studying her face for a few minutes, taking a break from my hunt. Her name was Sicily, which I found rather odd, but different.

With only two pages left, I began to feel anxious. I wanted so badly to pick a variety, that way maybe I could discover which kind of girl made me happy. On this page only two names stood out, Amelia and Olivia. Amelia was an editor for a book publishing company in the next city over, and Olivia was a downright gorgeous girl who worked as a model. I knew I shouldn’t pick her. I had dated a bunch just like her, but those piercing gray eyes were not easily forgotten, and I couldn’t stop myself from sending the message.

I decided to contact all three girls on the very last page no matter what their profiles said. Christa, Georgia, and Claire were all messaged. This last set was a true variety from a country girl to a chef. I felt pleased at my choices. Now I had to wait. Patience wasn’t exactly a virtue I had been blessed with. I skipped to my message box, which was of course empty.

My bed was calling my name, and as sleep crept in, I couldn’t help but smile thinking of all the possibilities ahead of me.

Labyrinth: The Keeper Chronicles, a prequel by Katherine Wynter
Palindrome by Stuart Woods
A Christmas Howl by Laurien Berenson
The Lover's Dictionary by David Levithan
The Witch of Belladonna Bay by Suzanne Palmieri
A Midsummer Night's Scream (The Dulcie O'Neil Series Book 7) by H.P. Mallory
Love Under Two Jessops by Covington, Cara
Sawbones: A Novella by Stuart MacBride
When Opposites Attract by Romina Valdes-Alsina
The Millionaire's Games by Helen Cooper