The Absolution of Roberto Acestes Laing 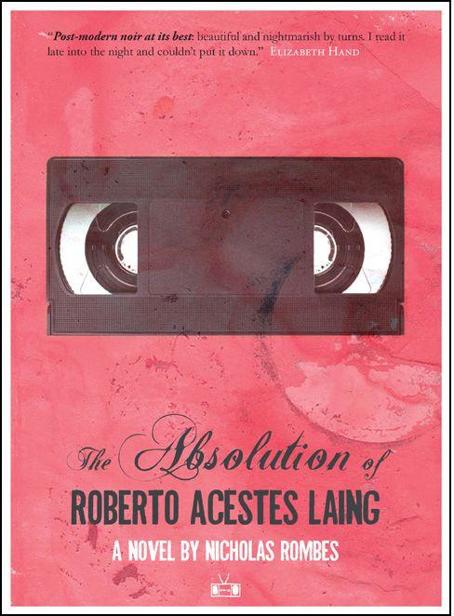 “Like a cross between Paul Auster’s
The Book of Illusions
and Janice Lee’s
Damnation
,
The Absolution of Roberto Acestes Laing
is at once smart and slyly unsettling. It is expert at creating a quietly building sense of dread while claiming to do something as straightforward as describe lost films—like those conversations you have in which you realize only too late that what you actually talking about and what you think you are talking about are not the same thing at all.”

“Suffused with the best elements and obscure conspiracies of Bolaño, Ligotti and speculative fiction, Rombes’ work gnaws away at the limits of what a novel looks like. Through the writing of films that never existed, it finds a space at once eerily familiar and entirely of its own.”

“This hallucinatory and terrifying secret history of film is so meticulously researched and gorgeously written that I wonder if, in fact, Nicholas Rombes has uncovered a lost trove of works by David Lynch, Orson Welles, Antonioni and Jodorowsky somewhere in the California desert.
The Absolution of Roberto Acestes Laing
is post-modern noir at its best: beautiful and nightmarish by turns. I read it late into the night and couldn’t put it down.” 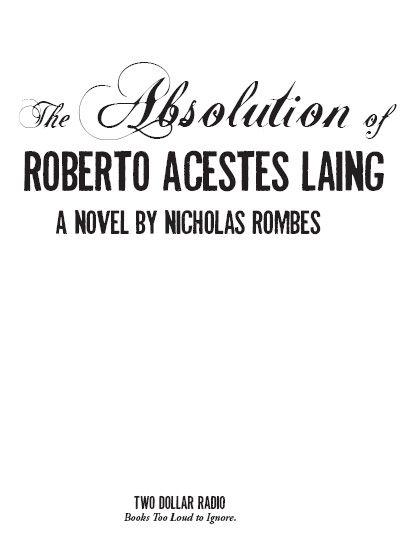 TWO DOLLAR RADIO
is a family-run outfit founded in 2005 with the mission to reaffirm the cultural and artistic spirit of the publishing industry.

We aim to do this by presenting bold works of literary merit, each book, individually and collectively, providing a sonic progression that we believe to be too loud to ignore.

No portion of this book may be copied or reproduced, with the exception of quotes used in critical essays and reviews, without the written permission of the publisher.

Books Too Loud to Ignore.

“So, montage is conflict.”

The Murderous King Addresses the Horizon
(1910)

The Story of A. (Laing’s digression)

The Absolution of Roberto Acestes Laing

“On the edge of non-existence and hallucination, of a reality that, if I acknowledge it, annihilates me. There, abject and abjection are my safeguards. The primers of my culture.”

—Julia Kristeva, from
Powers of Horror

“Thou hast removed my soul far off from peace.”

“Excuse Emily and her atoms.”

—fragment from an Emily Dickinson “envelope” poem, circa October 1882

AS FOR R. LAING, WHO CAN BLAME HIM?

There’s going to be a person named Katy, you understand
. These were the first words he spoke to me. I kept waiting for Katy. Once, during our conversations, he told me he’d “had people hurt in absentia.” I pondered this, the semantics of this.

I interviewed him over a three-day period during a locust-infested summer in a cramped, hot motel room where, to judge from the morbid condition of things—the rotting brown carpeting, the dresser warped and distended as if it had been waterlogged and then dried out, the heaving, peeling sky-blue wallpaper that suggested infestation—he had paid someone in dubious currency to be left alone. He was wearing something like a scarf. Bright red, I remember that, a scarf that brought to mind the sort of clarity that only happens through the iron-willed exertion of power. Did I see a photograph once of Augusto Pinochet wearing a scarf, as well, and a cracked smile that suggested the terror of pure reason? Laing’s dark skin, reddish hair, large hands, and a pale or cream-colored blazer reminded me of the tropics somehow, and in the weary way that he greeted me it seemed as if he had dragged along with him all the time zones he had passed through to get here, and was existing—at this very moment—in each of them simultaneously. A man in his mid-60s but who looks much younger, as if his exterior aging has stalled while his interior aging continued. He has a shock of white hair and an open face. But, for some reason, when he opened that motel room door the first thing I
noticed wasn’t Laing at all but a chair in the corner of the room, a chair that couldn’t possibly have been
from the motel
. It was situated not on the floor itself, but on an unstable foundation of old books (phonebooks, or so I thought) and newspapers. It looked as if it had been reupholstered recently in blue velvet, but done in such a poor way that the fabric was stretched too tightly in some spots and was bunched up or loose in others. And on the chair—which struck me more as a throne or a throne disguised as a chair—there were several neat stacks of uncased VHS tapes, tapes which I assumed were dubs of the films that I’d been sent here to interview Laing about.

Not that he acted courtly. He welcomed me man to man. He called me by a name that only my grandmother used, as if we had shared some secret history that I had forgotten, and at other times called me “A.” which turned out to be the name (or the initial of the name) of a very dangerous person he fell in with during his librarian/graduate school days. He showed me around the place, as it were. A small room, #228, that smelled of scalded milk and had the feeling of a dungeon to it, not that I’ve ever been in one. A door that opened out onto a narrow cement landing looked down across a vast, gullied parking lot, as if built for a motel ten times larger than this one. A bed stripped of its sheets and covers. The throne-chair in one corner. The motel room TV set, its flat screen spray-painted red, in another corner. A small round table where the interviews took place.

Who among us has the authority, the power, to bind and loose?

I had been sent there
on assignment
, as they say, but also out of curiosity, my own, as it were, eagerness to come close to the source of a myth. On the surface I was simply here to interview Laing for a short-lived cinema journal dedicated to the preservation of lost films that had been awarded a grant to investigate and report on neglected films. And whose chief editor Edison (that’s what we called him, after Herman Casler, an early
film pioneer whose ideas Edison stole, and we called him that because he was a thief himself, but a generous one) I had persuaded, in a rare, belligerent show of confidence, to sign over a large chunk of to fund my excursion by borrowed van from central Pennsylvania into Wisconsin (near the western edge of the Chequamegaon-Nicolet National Forest) to interview Laing, whose obscurity had made him fashionable of late, as if nostalgia for the analog had somehow become nostalgia for Laing and his dirty, mistakist, unrepentant ways. I’m certain others had tracked him down but came to believe that what he told them about the films was unreliable. And yet isn’t unreliability its own form of certainty?

Always and Forever by Lindsay McKenna
God Save Texas: A Journey Into the Soul of the Lone Star State by Lawrence Wright
The Epicure's Lament by Kate Christensen
Mayhem by Sarah Pinborough
The Widow's Walk by Carole Ann Moleti
Licensed for Trouble by Susan May Warren
Collateral Damage by Klein, Katie
The Accidental Assassin by Nichole Chase
Best Supporting Role by Sue Margolis
The Legacy of Buchanan's Crossing by Rhodan, Rhea