Read The Age of the Unthinkable Online

The Age of the Unthinkable 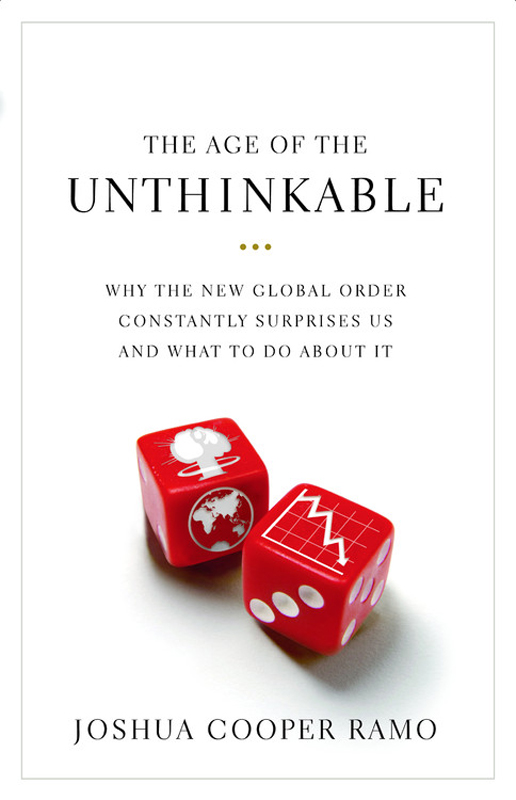 PART I
The Sandpile Effect

1. The Nature of the Age

7. The General and the Billionaire

8. The Management Secrets of Hizb’allah

9. The Limits of Persuasion

11. The Revolution and You

The thick coffee, in two small gilt-edged cups and with that bitter bite of near-burnt Arabic chicory, has gone cold. We are
sitting more or less in silence, each of us thinking, staring idly at a muted television nearby. It is the early fall of 2008,
and the headlines, even on the station we are watching — Al Manar, the TV channel of Hizb’allah here in Lebanon — are about
the global financial crisis. Fouad and I have a settled peace about us at the moment, the slow calm of an early afternoon,
each of us getting ready to return to our respective lives. He will, when he leaves, go back to his work as a chief of information
technology for Hizb’allah, the guerrilla and terror group that is, as one Israeli general has said, “the greatest in the world”
at what it does.

Fouad and I have had a long conversation about the Koran, about the demands of martyrdom, about his sense of himself as “already
dead,” simply walking the earth doing the work he is meant to do before ascending to heaven, probably at some moment chosen
in Tel Aviv. We’ve talked about his children and his brothers and sisters. He has asked me questions about China, which is
where I live and is a place he wants to understand better. I had come to see Fouad because, in all my dealings with Hizb’allah
over the years, I had found myself particularly fascinated and intrigued by their capacity for creativity and innovation,
even in the pursuit of shocking ends. Their obsession with finding better ways to fight and survive under the full pressure
of Israeli attack seemed to me a signpost of sorts, but I had always struggled to figure out what precisely it marked. It
meant, at the least, a record of defeat for the Israeli army. In 2006, for instance, fewer than 500 Hizb’allah fighters had
frustrated a 30,000-man Israeli attack, including one of the most extensive air campaigns in Middle East history. Hizb’allah,
to prove their point, had made a show of firing the same number of missiles on the last day of the war as they had on the
first.

In trying to understand how our global order is now working and changing, I knew I needed to be intimate with the ideas Fouad
carried around, no matter how repellent they might be. In a way, the passion for innovation and the geeky curiosity of fighters
like Fouad reminded me of friends of mine who had started great Internet companies or people I knew who were managing gigantic
hedge funds. They were mostly around my age, in their thirties and forties. And if I had encountered them first in my role
as foreign editor of
Time
magazine, these people had remained interesting and fascinating to me once I left journalism precisely so that I could better
feel how our world was changing, instead of merely observing its shifts and lurches from a reportorial distance. The instinct
for change, an eager fluency with the tools of serious disruption, I had noticed, seemed particularly alive in my generation.
This was the generation that had built the Web into something useful and revolutionary, that had assembled huge and unregulatable
financial firms churning out billions in profits while creating trillions of dollars of risk. It was a sense you could also
find in many people I knew in China as they struggled to build an economic and political order against the unpredictable demands
of constant newness. Change is at the center of all of their lives. They seek it out and, when change is proceeding too slowly,
accelerate it. They operate with the self-regard and courage of people who believe that the tide of history is on their side,
bringing us closer to whatever dream they find most exciting, whether it is fast universal connections to data or wholly new
types of government. They see this process as one in which destabilization of the existing order is not only necessary but
inevitable.

You don’t dare draw a moral equivalency between the crimes of Hizb’allah and, say, the innovations of Google, but you can
see in each the workings of a powerful energy: the imbalance of 500 fighters against 30,000 soldiers or two university students
remaking the whole Web from a dorm room. These hot cells of innovation draw the very best minds of a generation: quantitative-math
geniuses to hedge funds, computer savants to tech startups and, well, darker corners. “Our e-mail is flooded with CVs,” Fouad
told me. “But of course some people don’t have the courage to be on the terrorist watch list, even if it is to serve a sacred
cause.”

When I thought of these rebels I knew in the context of other friends of mine, such as the suits working in the National Security
Council or the U.S. Army or IBM or Time Warner, I realized that there was no chance those conservative places could ever compete.
They were locked, from top to bottom, from young to old, and in every level of their bureaucratic life, in a vision of the
world that was out of date and inflexible. As a perplexed Alan Greenspan confessed to Congress about his own thinking in 2008,
just a few weeks after Fouad and I watched financial news together: “I have found a flaw. I don’t know how significant or
permanent it is. But I have been very distressed by the fact.” The congressman questioning him asked, “In other words, you
found that your view of the world, your ideology, was not right. It was not working?” Greenspan replied, “Absolutely. Precisely.
You know that’s precisely the reason I was shocked. Because I have been going for forty years or more with very considerable
evidence that it was working exceptionally well.”

You probably didn’t need to hear it from Greenspan to have a sense of the confused navigation of our leaders. How can the
president of the United States declare a war won just as it becomes more violent? Why are Russian bombers flying off American
coasts again? How did China, a country with an average daily income of $7 per person, amass nearly $2 trillion in U.S. debt
in less than a decade? How is it that the secretary of the treasury of the United States, a near-billionaire financier, can
say that the worst of a crisis is over in May and then find himself in August furiously battling to save the global financial
system? Why is it we can agree on an immense collection of problems, such as global warming or the spread of nuclear weapons,
that must be solved now — and then make no real progress or only move backward?

After I left Fouad, I recalled a conversation I had had a week earlier with a friend who has a key role in the Chinese banking
system. He explained to me how he had locked down his own financial institutions in 2007 to avoid just the sort of crisis
now sweeping the globe. He was shocked, he said, that the United States had not seen it coming, had not acted. He had seen
it, had
felt
this incipient crisis. It began to dawn on me that what Hizb’allah, China, and those friends of mine working in places like
Google shared was something more than just ambition for change. Remember how, in advance of the tsunami in 2004, animals all
around Indonesia and Thailand and Sri Lanka ran uphill well before the waves that killed 250,000 people arrived, how they
were responding to some instinct for cataclysm, one now comforted out of existence in our own psyches. Well, I realized that
afternoon with Fouad that he and the other people I had been talking with had somehow rediscovered this instinct, had mastered
it. In every twitch of their keyboards or investments or suicide bombs there was the mark of a much larger change that they
knew was, even now, surely rolling toward us.

The night before I was with Fouad, Hizb’allah’s deadly and charismatic leader Hassan Nasrallah had exulted that the U.S. government
had told the Georgian military they should study Hizb’allah to learn how to fight the Russians more effectively. The White
House recommending the tactics of Hizb’allah as a study text? It was impossible, given the rumor mill that is Beirut, to know
(or even hope to verify) if such self-inflating gossip was true. But even if it wasn’t,
should
it have been? Was there something to learn from Fouad and Nasrallah and their few-thousand-man unholy army? Anyhow, if you
were sitting in Beirut on that fall 2008 day, watching allegedly unbreakable billion-dollar financial institutions snap on
one TV channel and Nasrallah celebrating his imagined endorsement from Washington on another, this much at least was obvious:
we had arrived firmly in an age in which the unthinkable had become, frankly, inevitable.

We are now at the start of what may become the most dramatic change in the international order in several centuries, the biggest
shift since European nations were first shuffled into a sovereign order by the Peace of Westphalia in 1648. This change is
irresistible. It is infectious. It will spread to every corner of our lives, to our businesses, our bank accounts, our hopes,
and our health. What we face isn’t one single shift or revolution, like the end of World War II or the collapse of the Soviet
Union or a financial crisis, so much as an avalanche of ceaseless change. It is change that will render institutions that
look unshakable weak and unstable; it will elevate movements that look weak into positions of great power. As much as we might
wish it, our world is not becoming more stable or easier to comprehend. We are entering, in short, a revolutionary age. And
we are doing so with ideas, leaders, and institutions that are better suited for a world now several centuries behind us.
On the one hand, this revolution is creating unprecedented disruption and dislocation. But it is also creating new fortunes,
new power, fresh hope, and a new global order. Revolutions, after all, don’t produce only losers. They also — and this is
the heart of the story I want to tell here — produce a whole new cast of historical champions. This book isn’t the tale of
our inevitable doom. It’s a guide to how we can save ourselves. What you’ll find on the following pages is meant to be a decoder
ring for the perplexities of our current world, for the dangerous magic that seems to be unspooling everywhere. And it is
also, once you’ve understood it clearly, a way for anyone, from eight to eighty, to begin to see what this world means for
you — and to see what you can do about it.

The Terms of Release by BA Tortuga
Fate of the Vampire by Gayla Twist
Lolita by Vladimir Nabokov
Someone Like You by Emma Hillman
The Daughters of Mars by Thomas Keneally
Fourth Day by Zoe Sharp
Irania by Inma Sharii
Blood Moon: A Rowan Gant Investigation by M. R. Sellars
Paxton and the Lone Star by Kerry Newcomb
Heir of Fire by Sarah J. Maas