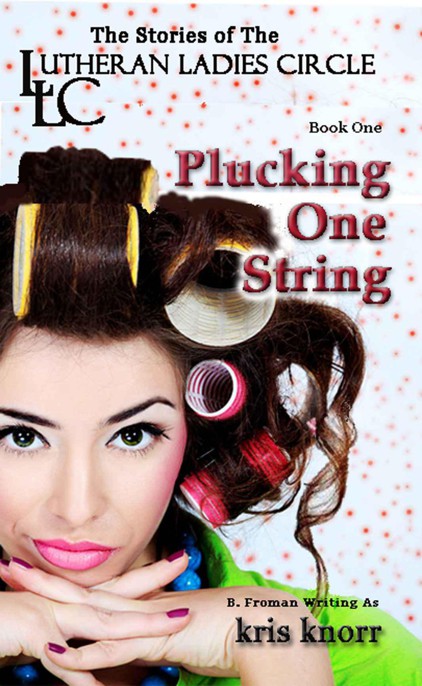 - I’ll Be Home For Christmas

- A Long Wait for an Apology

- The Serious Consequences of Words

- A Night of Easter

- Holding Onto The Traditions of Men

- Secrets of the Soda Shop

ALL RIGHTS RESERVED. No part of this book may be reproduced in any form by any electronic or

mechanical means without permission in writing from the author, except in the case of brief quotations embodied in critical articles and reviews. This is a work of fiction. Names, characters, places and incidents either are the product of the author’s imagination or are used fictitiously, and any resemblance to actual persons, living or dead, business establishments, or events is entirely coincidental.

Reading the Series in Order

Book One: Plucking One String

Book Two: Through the Knothole

Book Three: Thanks for Leaving

You’ll find bonus material in the back because that’s the way Lutheran Ladies do it.

For women everywhere, who are like me, making mistakes and slow in progress—

We’re still ahead of everyone who isn’t trying—

And we’re not alone.

PASTOR JIM HENLEY yawned and rubbed both hands over his gray-stubbled crew cut. As he had done every morning, he thanked God for the day and reminded Him that he hated getting out of bed. The sixty-five-year-old clergyman arose, took three steps, and dropped on the floor. He was at the Pearly Gates before his body hit the carpet.

“It was a brain aneurysm,” the medical examiner later explained to Henley’s wife.

Vera Henley quietly snorted and looked away. She knew it was due to his life-diet of pecan pies and peanut butter cookies supplied by a well-meaning flock. The celebration for his 25th year at Shaded Valley Lutheran Church had been a buffet of cardiac sin.

“There’s nothing you could’ve done.” The doctor patted Vera’s shoulder. She arched an eyebrow, suspecting that Lorena Ard’s lard-laden chocolate cake had probably squeezed the final globule of fat into his barricaded arteries. Why would any responsible person serve a cake containing two sticks of butter in the frosting, aptly named Devil’s Food? Divided into 24 squares, Lorena’s cake had probably nudged over two dozen people closer to their graves.

Vera nodded at the medical examiner, skeptical of his diagnosis. After all, he’d only known her husband for a short time—after he was already dead.

Steuben’s Funeral Home responded almost immediately to her call. They took a short detour to wash the hearse and polish the chrome. They downloaded
The Top Twenty Lutheran Hits for Hard Times
and had it soulfully humming through the vehicle’s speakers before they arrived. They’d worked with Mrs. Vera Henley before.

Pastor Jim may have presided over funerals, but it was Vera who coached everyone, including the undertaker, on the details that exiting this world created. Steuben’s understood that Jesus had burst in and carted her husband off to the heavenly feast, but He’d left Vera, not them, with the earthly arrangements. Without a pause, she herded them as efficiently as she’d attacked everyday life.

Her husband had often teased that God had merely created the world; Vera organized it. Years ago, he’d even given her a small, golden trophy of Atlas shouldering the globe. The plaque on it read.

Manager of the Universe

He’d said it was a visual reminder for her to let go. She’d given him a thin smile and thanked him for the “gift.”

Months after the funeral, Vera stared at the empty windowsill. Her coffee pot gurgled, scenting the kitchen with its subliminal wake-up message. Jim had set the trophy in that very window, over the kitchen sink. Vera sighed at the memory. She’d bided a two-week viewing period, then removed the golden monstrosity—to a shelf in the laundry room.

The trophy showed up on the windowsill again.

“Did you haul this back here?” she’d asked, one eyebrow raised. Jim had only smiled.

Next, Vera had hidden it under the bed in the spare room. It reappeared on the sill.

No matter where she stashed it, inevitably, the golden award reappeared.

Jim said he actually enjoyed this game of Hide-the-Atlas. During his searches, he found items stuck in cabinets and top-most shelves that had been missing for years. Faded, orange Oklahoma State University pennants, Cowboy statuettes, and tacky college mementos resurfaced in his office after he found them in Vera’s “out-of-sight-out-of-mind” boxes.

When she’d exhausted all of her hiding places, she dropped Mr. Atlas at Bernie’s Been-Around, Come-Around Thrift Store in their town of Stillwater, Oklahoma.

That proved to be an even bigger mistake. When Pastor Jim couldn’t find the trophy, it became a quest. He recruited parishioners to help in the search. During one scavenger hunt, they discovered his college mug collection hibernating behind the sleds in the garage. He hadn’t seen those old friends since he graduated from seminary more than 40 years ago. Delighted, he brought them back into the kitchen drinking-glass rotation.

When Vera found Budweiser, NASCAR, and OSU mugs intermingled with her matched set of blue
Pfaltzgraff
dishes, she confessed she’d given Mr. Atlas a one-way ride. Jim had smiled, given her a peck on the cheek, and said he guessed she wasn’t ready to give up her “title” yet.

A
burp
sputtered from the coffee machine, rousing Vera from her memories. She found herself touching her cheek and staring at the empty windowsill. What was the matter with her? The installation ceremony for the new minister was in a few hours. There was much to do.

She noticed the counter. With a sigh and slow shimmy-shake of her white hair, she snapped off the machine and left the kitchen. Two empty mugs sat next to the coffee pot.

At the church, Vera scrutinized the young man standing in front of the congregation in white robes and a red stole. Had it really been four months since Jim had been in that very spot, leading worship? She’d missed her volunteer duties because of the persistent demands of end-of-life details and annoying repairs on their house, which seemed to be trying to join Jim in heaven, piece by piece.

People had been kind. They didn’t seem to mind that she hadn’t been there. Of course, without her oversight, they did a half-finished job of tasks. Like the flowers on the altar. At best, they were skimpy-stemmed specimens that looked like they’d been left over from Jim’s funeral. She made a mental note to speak to the chairwoman of the Altar Guild.

And the incoming clergyman’s choice of music merited another frown. She understood why they’d called such a young man. The congregation was fading into a sea of gray-haired folks ready to travel in their RVs and eager to turn over the reins. This new, young pastor was their solution. He’d pump them up like an energy drink, using his super powers to bring ideas, enthusiasm, and more members. Of course, he’d be impervious to the kryptonite of skepticism and self-righteous old cranks.

Vera gave a judgmental sniff. The congregation was used to an older, more mature person to minister to their needs. There’d be trouble brewing before long. With sixty-five years of wise living—twenty-five of those years at this church—she knew how this congregation worked, their personalities, and how to get projects done. Her skills were needed now more than before. She straightened her shoulders, set her chin like a ship’s rudder changing its bearings, and charted a different path. It was time to leave her sorrow and make sure things ran on course.

When the service ended, the crowd filtered downstairs to the Ladies Circle grand-style celebration in the Fellowship Hall. The coffee was bolt-your-eyes-open strong, and the hunks of cake were sized to cover a plate. Vera pursed her lips, auditing the room. The soiree was free of Devil’s Food cake, so there shouldn’t be any funerals next week. And more serving tables should have been used.

Walt, who had been on the Property Committee since the creation of dirt, gave a nod as he passed her. One of his big hands pinched a crystal cup by its beaded handle. The other hand clutched his personal coffee mug stamped with “Git Yer Own” across it.

“Walt, from the looks of things, I need to resume planning our functions. So, before I forget,” Vera began, “we need to pick a date to set up the Halloween booths.” He paused in mid-stride as though translating the words. Without turning to face Vera, he gave a single shake of his head. “Nope. Sorry you didn’t come to last night’s meeting. There’s no Halloween party this year. That’s one less thing I have—”

“The Ladies Circle always hosts that party. I can get you help in setting it up.” Vera knew Walt and his catch-me-if-you-can ways.

“Not this year.” His confidence leaked from the words like a pricked balloon. Age hadn’t shrunken his body, and though he towered over Vera, he shifted his feet and stared at the little teacup full of pink punch in his left hand.

Vera studied him as he began making his escape. She was surprised that he’d get a drink for anyone other than himself. He’d even combed the few hairs he had on his head. “Nope,” he was saying as he took a half-step. “Not gonna happen.”

Vera pasted on a flat smile. “I’ll talk to the Pastor about it.” She could see Walt eyeing the gap between them.

He inched into the crowd. “Some folks want to change things around here.” He jerked his head toward the new pastor. “He says he supports change.” And with that repulse, Walt made his getaway.

“No. It’s the way everyone’s been doing it for some time now.”

The voices from the meeting drifted up the stairwell as Nan, the organist, hurried down the steps. She didn’t really want to come to another meeting, but the Ladies Circle was like an X-rated parable—entertaining. The only trick was learning how to duck the barrage of extra volunteer work.

She pattered into the florescent-lit basement and slid into a seat next to a large woman fussing her jacket over her chair-back. A pan of gooey-frosted brownies was being pushed along the table, from person to person. The women of the Ladies Circle met the first Saturday of every month. Chocolate was always in attendance.

“Then why don’t we do what the public schools do?” Hettie, an elementary schoolteacher, paused her argument to lick frosting from her finger after serving herself a brownie. “Call it a Harvest Festival. The kids still wear costumes, glutting themselves on candy. Politically correct parents will be happy. Dentists will be thrilled. Everybody’s chipper.” With a glance across the table at Kay, she plopped a second brownie onto her napkin.

“I talked with Pastor Poe.” Vera orchestrated the meeting with her upheld pencil. “He felt Halloween parties were primitive.” She stabbed her pencil toward Hettie as the teacher started to interrupt. “You may disagree, but that’s not the point. I’m very familiar with the trials and strains of one’s beginning ministry, so we will be supportive in his efforts at this church. There’s no reason for you to start a rebellion his first week here.” She went back to studying her typed agenda. “Now, in new business—”