The Aleppo Code (The Jerusalem Prophecies) 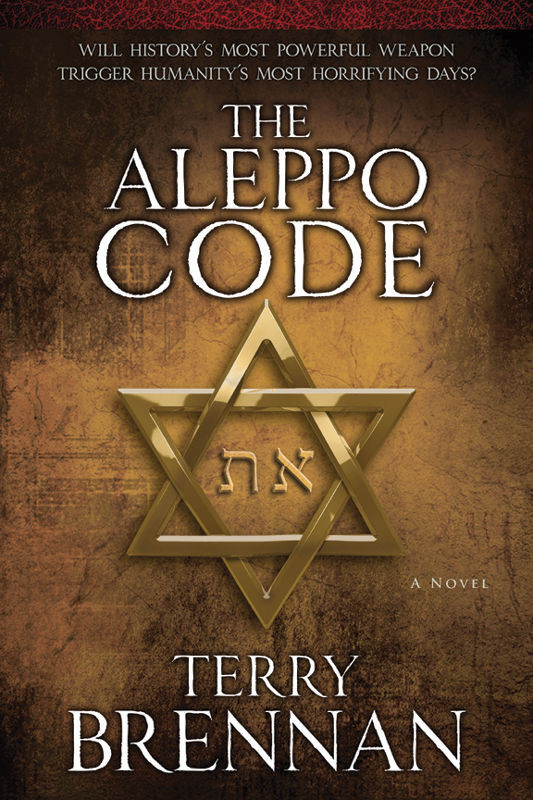 Praise for
The Sacred Cipher
, The Jerusalem Prophecies #1

“I wasn’t sure at times if I was reading a novel … or the newspaper. Except that
The Sacred Cipher
was a far more fascinating read. If you read one book this year, make it this one.”

“More historically and biblically accurate than
The Davinci Code
and just as adventurous as an Indiana Jones movie,
The Sacred Cipher
combines action and mystery to draw readers into a world of ancient secrets and international escapades.”

Praise for
The Brotherhood Conspiracy
, The Jerusalem Prophecies #2

“Terry Brennan meticulously crafts stories of intrigue and action. His ability to weave archaeological and historical detail into a riveting plotline is simply amazing. Both
The Sacred Cipher
and
The Brotherhood Conspiracy
could step off the front page of any newspaper tomorrow. You’ll find them captivating!”

“
The Brotherhood Conspiracy
weaves a beautifully intricate web of intrigue and suspense. Painstakingly researched with powerful characters, it takes the reader on an exciting and thought-provoking adventure. Brennan brilliantly meshes an internal struggle of faith with an epic story about a world on the brink.”

“An international mystery thriller with a rapid-fire plot … Readers who enjoy the creative juxtaposition of history, religion, and geopolitics will find in Brennan’s work a feast for the senses.”

The Aleppo Code: A Novel

All rights reserved. No part of this book may be reproduced, stored in a retrieval system, or transmitted in any form or by any means—electronic, mechanical, photocopy, recording, or otherwise—without written permission of the publisher, except for brief quotations in reviews.

Distribution of digital editions of this book in any format via the Internet or any other means without the publisher’s written permission or by license agreement is a violation of copyright law and is subject to substantial fines and penalties. Thank you for supporting the author’s rights by purchasing only authorized editions.

Apart from certain historical and public figures and historic facts, the persons and events portrayed in this work are the creations of the author, and any resemblance to persons living or dead is purely coincidental.

To my wife, Andrea

Your smile and your spirit sustain me.

For a guy with one idea to come up with an adventure trilogy—well, you know it’s not been a solo journey.

First—always—I give thanks to God for the gift. Nothing is impossible for you.

On this earth, I am deeply indebted to my family for their love, support, and encouragement. Andrea, my wife, has helped keep my eyes on God and my feet on the ground for thirty-six years. You have made me whole. And to Meg, Azizi, and Matt—thanks for all the round-table discussions and debates that helped sharpen my writing and broaden my characters. Particularly for Meg, a fountain of logic and good sense—and great ideas. You’ll write your own someday.

Thank you to Kathy Vance, who helped put life to the one idea; to Wanda Dyson, who believed in the idea, and in me; to my accountability partners—MO, FA, MP, JL, MM, SV, and MW—who held me to a higher standard as a man, husband, and father. Thanks to Stacey Ashton, for thoughtful insight.

And, as always, a rich thank you to the inspiring and talented team at Kregel Publications—Dennis Hillman, Steve Barclift, Dave Hill, Noelle Pedersen, and my editor, Dawn Anderson … I notice a lot of mistakes in the thrillers I read. Dawn, you are the best editor of the bunch. And so gentle with the whip.

The team that discovered the Third Temple of God hidden
under the Temple Mount:

“Sammy” Rizzo.
Director of the book storage and retrieval system in the Humanities and Social Sciences Library on Bryant Park at 42nd Street in New York City; colleague of Joe Rodriguez.

Dr. Richard Johnson Sr.
Managing director of the Collector’s Club in Manhattan; former chair of the Antiquities College at Columbia University; fellow of the British Museum.

Chaim Shomsky.
Chief of staff to the prime minister of Israel.

Jonathan Whitestone.
President of the United States; Republican; evangelical Christian from the state of Texas.

Roberta Smith.
Leader of the Demotic Dictionary Project at the University of Chicago’s Oriental Institute, expert on the Demotic language.

Sam Reynolds.
Career diplomat of the US State Department; assisted the team that found the Temple.

Sheik Khalid al-Kabir.
Head of the Anbar Awakening, the nomadic tribes in western Iraq who joined forces with US Marines to fight Al Qaeda; old friend of Annie Bohannon.

Stew Manthey.
CFO of the Bowery Mission; colleague of Tom’s.

Edward Elgar not only felt like a fugitive, he acted like one. He believed his life depended on stealth.

Elgar’s mind was no longer on the lecture he had just completed to the aspiring composers at the University of Westminster, nor was he conscious of his own shivers as he bundled his wool greatcoat tightly around his neck and pulled his hat down snugly over his thinning hair. He wasn’t as interested in staying warm, protecting himself against the biting December wind that whipped across Paddington Street Gardens, as he was determined to be invisible.

Walking briskly along the east side of the gardens, Elgar kept his head tilted down, obscuring his face as he peered under the brim of his hat, scanning the street in front of him. He kept to the side streets, avoiding the easier walk on the Marylebone High Street in return for the shadows on gaslit Aybrook Street. Elgar regularly changed directions, glancing over his shoulder each time. At Manchester Square, he completely circled the square once, then half again, searching the shadows for movement and praying for his nerves to quiet.

The Dig by Cynan Jones
A Heart in Flight by Nina Coombs Pykare
A Girls Guide to Vampires by Katie MacAlister
Break Through by Amber Garza
The Choice (The Choice Series Book 1) by Heather Gillette
The Sisterhood of the Dropped Stitches by Janet Tronstad
Kissing Carrion by Gemma Files
Here's Looking at You by Mhairi McFarlane
The Painter: A Novel by Peter Heller
Kept by Carolyn Faulkner