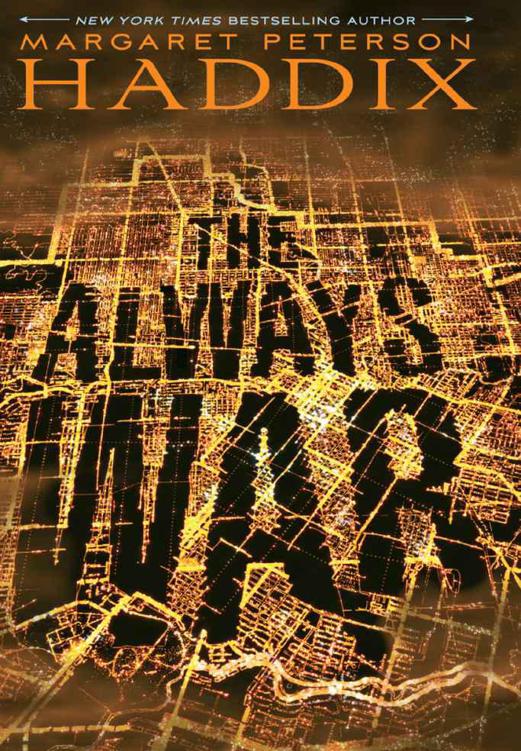 T
essa’s body reacted as quickly as her mind. Before she was even conscious of moving, she was already on her feet and running toward Gideon. Her legs tangled in the blanket, but she kept going, diving for Gideon. She knocked him sideways onto the floor of the plane, so if any of the enemy were already trying to shoot him, the bullets would just whiz harmlessly past. But this wasn’t enough. It wasn’t enough to tackle him, to hold him down, the mud from her ragged clothes rubbing off on his spotless white uniform. Guns could be reloaded, re-aimed, fired again and again and again.

Tessa rose up and slammed her hand against the control on the wall.

—from
The Always War

FOR AS LONG AS TESSA CAN REMEMBER,
her country has been at war. When local golden boy Gideon Thrall is awarded a medal for courage, it’s a rare bright spot for everyone in Tessa’s town—until Gideon refuses the award, claims he was a coward, and runs away. Tessa is bewildered, and can’t help but follow Gideon to find out the truth. But Tessa is in for more than she bargained for. Before she knows it, she has stowed away on a rogue airplane headed for enemy territory. But all that pales when she discovers a shocking truth that rocks the foundation of everything she’s ever believed—a truth that could change the world. Is Tessa brave enough to bring it into the light?

is the author of many critically and popularly acclaimed books for children and teens, including
Claim to Fame, Palace of Mirrors, Uprising
, The Missing series, and the Shadow Children series. A graduate of Miami University (of Ohio), Margaret Peterson Haddix worked for several years as a reporter for the
Indianapolis News
. She also taught at the Danville (Illinois) Area Community College. She lives with her husband and two children in Columbus, Ohio.

Watch videos, get extras, and read exclusives at

The Girl with 500 Middle Names

Running Out of Time

is a trademark of Simon & Schuster, Inc.

The text for this book is set in Palatino LT Std.

For Rich and Mark and Doug, in memory of
certain Iraq War debates

WHEN A CHILD IS BORN by Jodi Taylor
Elemental Fear by Ada Frost
Playing With Fire by Cynthia Eden
The Gift by Jess C Scott
Fall From Love by Heather London
When Heaven Weeps by Ted Dekker
Murder Crops Up by Lora Roberts
Heather Graham by Bride of the Wind
1967 - Have This One on Me by James Hadley Chase
Butterflies in Honey (Growing Pains #3) by K.F. Breene