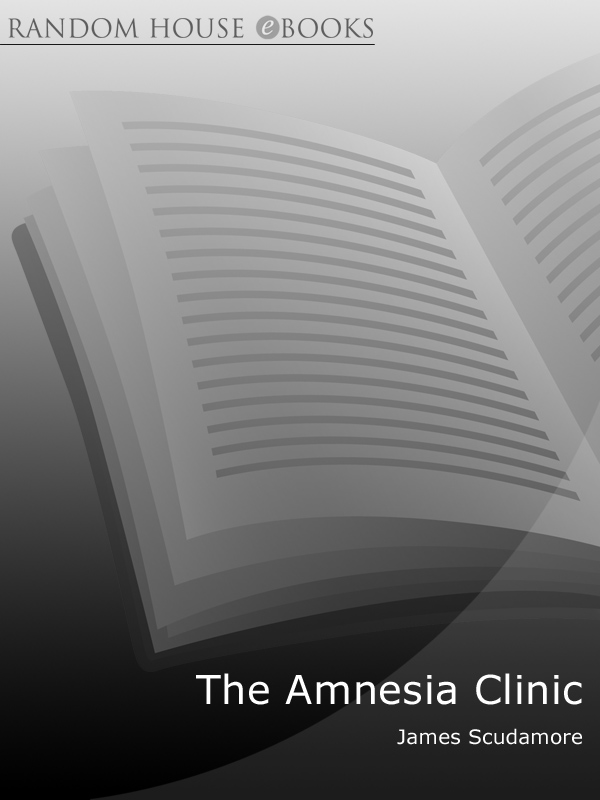 Anti, a quiet English boy living in Quito, Ecuador, strikes up a friendship with flamboyant classmate Fabián, who is everything Anti isn’t: handsome, athletic and popular. What’s more, he lives with his rakish Uncle Suarez, while Anti is stuck in the dull ex-pat world inhabited by his parents.

Suarez, a storyteller par excellence, infects the boys with his passion for outlandish tales, and before long their relationship becomes one conducted entirely through the medium of storytelling. One subject, however, is taboo: Fabián’s parents. But when details surrounding their disappearance begin to emerge, Anti decides to console his friend with a story suggesting that Fabián’s mother may be living at a bizarre hospital on the coast for patients with memory loss. With confused emotions and reality losing its tenuous grip, the boys embark on a quixotic voyage across Ecuador in search of an ‘Amnesia Clinic’ that may or may not exist.

James Scudamore was born in 1976 and lives in London.
The Amnesia Clinic
is his first novel.

James Scudamore has asserted his right under the Copyright, Designs and Patents Act, 1988 to be identified as the author of this work

This book is sold subject to the condition that it shall not by way of trade or otherwise, be lent, resold, hired out, or otherwise circulated without the publisher’s prior consent in any form of binding or cover other than that in which it is published and without a similar condition including this condition being imposed on the subsequent purchaser

‘The first thing she felt was a sinking in her stomach and a trembling in her knees; then, a sense of blind guilt, of unreality, of cold, of fear; then a desire for this day to be past. Then immediately she realised that such a wish was pointless, for her father’s death was the only thing that had happened in the world, and it would go on happening, endlessly, forever after.’

Sometimes great storytellers die before their time. It’s only right that great stories should be told about them in return. I will do my best.

On the 8
th
of September 1995, less than a year before the death of my friend Fabián, an anthropologist named Johan Reinhard and a mountain guide named Miguel Zárate discovered the frozen body of an Inca princess near the summit of a Peruvian volcano. Aware of the importance of what they had found, Reinhard brought the corpse down from the mountain, wrapping it for insulation inside his foam sleeping mat.

The find was not universally welcomed: the mule driver who met the climbers at the foot of the mountain blindfolded his animal to stop it bolting at the prospect of carrying a dead body, and the proprietor of the hostel where they’d been staying sent them away, fearing bad luck. Eventually, however, Reinhard and Zárate made it to the town of Arequipa,
storing the body there in Zárate’s freezer until the proper authorities could be alerted.

The likelihood was that Juanita, or the ‘Ice Princess’, as she was dubbed on subsequent international tours, had been clubbed to death in a ceremony of sacrifice for the god of the mountain. She had been preserved in the ice for five hundred years and was in near perfect condition, apart from a pretty severe head wound.

Six months later, a feature on the Ice Princess appeared in an Ecuadorian national newspaper, and my friend Fabián Morales marched into our classroom at the Quito International School waving a copy of it in front of him.

‘Anti! You have to see this,’ he said. ‘They found some five-hundred-year-old Inca girl up a volcano in Peru.’

My name is Anthony but, as a child, I could never pronounce it. I called myself Anti, and so Anti is what I became. Just one example of how a perfectly innocent mistake can stay with you for ever.

‘Listen to this,’ said Fabián. ‘
Before being sacrificed, it is likely that the Ice Maiden was made to fast, and to participate in rituals involving the consumption of hallucinogenic drugs and strong drink
. Sex, too, I bet – and it says here she was only fifteen. Verena, you’ll do. What do you say we take you up a mountain, get you high and show you a good time? We may have to kill you, but you’ll be immortal, baby!’

‘You wouldn’t get me alone up a mountain, you disgusting pervert.’

‘No problem. How about just getting to it right here?
Mamacita!
Just give me your hand, baby. I’ll be as quick as I can.’

‘You’ll go to hell for saying that, Fabián.’

Verena Hermes wore three earrings in her left ear, tinted
her hair and doused herself daily in cheap perfume. She was one of our most treasured wet dreams, but Verena’s taste was for older men – or so she boasted – and contrary to what we told each other, neither Fabián nor I had ever elicited more from her than crushing words. Unchecked, the discussion might have carried on degenerating for some time. But for now it would have to wait. Our teacher, draped in the regulation corduroy of the British expat, ambled through the doorway, came to rest behind his desk, and exhaled just vocally enough to communicate his wish to bring us to order.

Juanita the Ice Princess was, for the moment, forgotten.

Later that day, as we sat by a basketball court waiting to be fetched from school, Fabián and I considered the discovery more seriously. A pair of snow-capped volcanoes – our own local mountain gods – loomed behind the boxy constructions of the New Town: Cotopaxi, peaking coyly over a scarf of cloud and pollution, and Cayambe, tonight refracting a violet splinter of sunset.

‘We’ve got to get out there,’ said Fabián. He practised a few listless conjuring moves, palming a Zippo in his left hand whilst misdirecting with his right, before pocketing the lighter tersely and sighing. ‘Everything’s being discovered too quickly. If we wait any longer, there’ll be nothing left to find.’

We – by which I meant Ecuador – had been. Although the border dispute had been effectively deadlocked since 1942, tensions between the two countries periodically rose. According to my father, who was cynical in such matters, this tended to happen around election time as a way to score political points, but a series of border skirmishes the previous year had proved more serious than usual, eventually claiming over one hundred lives. At fifteen, we were not yet
of an age to take the deaths seriously, but had both enjoyed the melodrama that went with being A Country At War: electricity rationing, anti-Peruvian sloganeering and even the possibility (however far-fetched) of an actual invasion.

‘Stop pricking around,’ said Fabián. His English was perfect, but he had a distinctive habit of swearing by improvising on half-remembered expressions that he’d picked up from cable TV, which sometimes resulted in bizarre, untried constructions. It was something of a trademark for him. ‘I’m not saying we should go to Peru. The Ice Princess has already been found. That’s what I mean:
everything
will have been done soon if we’re not careful. At the very least, I want to discover a new species before this year is out. Or something.’

‘We went to the Galápagos last year,’ I said. ‘That was pretty cool. That’s probably where you should start looking.’

‘I know that. Don’t fuck me around with your holiday snaps. We need to make our name. All the magic’s going out of this place, and being put in museums. I want a piece of it before it’s all gone.’

‘Something will come up. Here’s Byron – let’s go.’

Byron was the man who chauffeured Fabián’s uncle, although he had, in a former career, been a policeman. Fabián told me that his uncle hadn’t known this until they arrived back at the house one day to find a burglary in progress. Byron told Uncle Suarez to remain in the car, retrieved from the glove compartment a gun that Suarez didn’t even know he owned, and shot both the burglars in the back as they ran away. That’s what Fabián told me, anyway. There had been no opportunity for independent verification, as he said his uncle didn’t like to talk about it, and I certainly wouldn’t have asked Byron, who, though jocular enough, terrified me. My parents had told me horror stories about kidnappings taking place at gunpoint in the backs of cars. I became secretly uneasy whenever Byron’s hand
strayed too far from the gear stick, and I never held his gaze when his bloodshot eyes swivelled towards us in the rear-view mirror.

In spite of this, I loved going to stay with Fabián and his uncle. Even the journey was fun, and not just because we were picked up by an armed chauffeur in a black Mercedes. Byron’s wife Eulalia would leave us sandwiches on the back seat for the ride back, and there was a particular set of traffic lights on the journey where a mestizo on crutches sold packets of multicoloured chewing gum that were a perfect antidote to the cloying effects of peanut-butter mouth. On one celebrated occasion, following a poorly-supervised school excursion to the Equator during which Fabián and I had managed to consume half a litre of filthy
aguardiente
between us, we’d initiated a game on the journey home, the object of which was to chew a packet of gum and consume an entire sandwich simultaneously. Reeking of booze, and feeling very clever, we sat in the back of the car tipping handfuls of lurid pellets into faces already crammed with sandwich, allowing the artificial fruit flavours to detonate inside wedges of white bread and peanut butter and then munching away, digesting the sandwiches piece by piece until only the wad of gum remained. Swallowing one thing and retaining another would have been difficult enough had we been sober, and it wasn’t long before things backfired. Having accidentally bolted everything in his mouth, Fabián screamed at Byron to pull over and vomited a flamboyant mixture of cane alcohol, peanut butter and fruit gum into the gutter. Byron found the episode hilarious and, even now, continued to glance hopefully over his shoulder whenever he picked us up for evidence of more drinking on the sly.

The Sweetest Seduction, Breakaway Hearts by Crista McHugh
Love Under Two Kendalls by Covington, Cara
Under A Harvest Moon by James, Joleen
Wet Dreamz by Bobbi Romans
Brenda Hiatt by A Christmas Bride
The Hound at the Gate by Darby Karchut
Twist of Fate by Kelly Mooney
Ice and Fire: Chung Kuo Series by David Wingrove
A Girl Like You by Gemma Burgess
The Mountain of Light by Indu Sundaresan