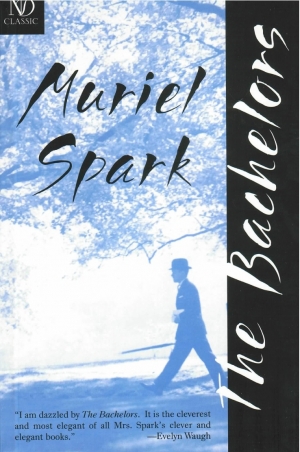 DAYLIGHT was appearing
over London, the great city of bachelors. Half-pint bottles of milk began to be
stood on the doorsteps of houses containing single apartments from Hampstead
Heath to Greenwich Park, and from Wanstead Flats to Putney Heath; but
especially in Hampstead, especially in Kensington.

In
Queen’s Gate, Kensington, in Harrington Road, The Boltons, Holland Park, and in
King’s Road, Chelsea, and its backwaters, the bachelors stirred between their
sheets, reached for their wound watches, and with waking intelligences noted
the time; then, remembering it was Saturday morning, turned over on their
pillows. But soon, since it was Saturday, most would be out on the streets,
shopping for their bacon and eggs, their week’s supplies of breakfasts and occasional
suppers; and these bachelors would set out early, before a quarter past ten, in
order to avoid being jostled by the women, the legitimate shoppers.

At a
quarter past ten, Ronald Bridges, aged thirty-seven, who during the week was
assistant curator at a small museum of handwriting in the City of London,
stopped in the Old Brompton Road to speak to his friend Martin Bowles, a
barrister of thirty-five.

Ronald
moved his old plastic shopping bag up and down twice, to suggest to Martin that
it was a greater weight than it really was, and that the whole business was a
bore.

‘Where,’
said Ronald, pointing to a package on the top of Martin’s laden bag, ‘did you
get your frozen peas?’

‘One
and six. That’s for a small packet; does for two. A large is two and six; six
helpings.’

‘Your
hand’s never out of your pocket,’ said Martin.

‘What
else have you got there?’ Ronald said.

‘Cod.
You bake it in yoghort with a sprinkle of marjoram and it tastes like halibut.
My old ma’s away for a fortnight with the old housekeeper.’

‘Marjoram,
where do you get marjoram?’

‘Oh,
Fortnum’s. You get all the herbs there. I get a bag of stuff every month. I do
nearly all the shopping and most of the cooking since my old ma’s had her op.
And old Carrie isn’t up to it now — she never was much of a cook.’

‘You
must have it in you,’ said Ronald, ‘going all the way to Piccadilly for herbs.’

‘I
usually work it in with something else,’ Martin said. ‘We like our herbs, Ma
and I. Come on in here.’

He
meant a coffee bar. They sat beside their bags and sipped their espressos with
contented languor.

‘I’ve
forgotten Tide,’ said Ronald. ‘I must remember to get Tide.’

‘I make
a list,’ said Martin, ‘when my ma’s away. I always do the shopping at the
week-ends. When Ma’s at home she makes the list. It’s always unreadable,
though.’

‘Do you
mind?’ said a girl who had just come into the coffee shop. She was referring to
Ronald’s bag of shopping; it was taking up the seat which ran along the wall.

‘Oh,
sorry,’ said Ronald, removing his bag and dumping it on the floor.

The
girl sat down, and when the waitress came to serve her she said, ‘I’m waiting
for a friend.’

She had
black hair drawn back in a high style, dark eyes and an oval ballet-dancer’s
face. She returned the two bachelors’ sleepy routine glance, then lit a
cigarette and watched the door.

‘They’re
always in the shops,’ said Martin, ‘these days. In season and out of season. It’s
the same with everything: you can get new potatoes and new carrots all the year
round now, and peas and spinach any time, and tomatoes in the spring, even.’

‘I make
do with streaky. I grudge breakfasts,’ said Ronald.

‘Your
hand’s never out of your pocket,’ Ronald said before Martin could say it.

A small
narrow-built man came in the door and joined the girl, smiling at her with a
sweet, spiritual expression.

He sat
side by side with the girl on the wall-seat. He lifted the menu-card and spoke
to her soundlessly from behind it.

Ronald
looked towards the man, whose body was now hidden by the girl at his side.
Ronald observed the head, unable to see at first whether his hair was fair or
silver-white, but soon it was plainly a mixture. He was thin, with a very
pointed, anxious face and nose, and a grey-white lined skin. He would be about
fifty-five. He wore a dark blue suit.

‘Don’t
stare,’ Martin said. ‘He’s on a charge and I’m prosecuting him. He’s coming up
again before the magistrates next week. He has to report to the police every
day.’

‘Fraudulent
conversion and possibly other charges. Somebody in my chambers defended Seton
ages ago. Not that it did either any good. Let’s go.’

Ronald
put down the newspaper in his hand.

‘Tide,’
said Ronald in the street. ‘I really must remember Tide.’

‘Which
way are you going?’

‘I’m
going there too. I haven’t got a lot of groceries on the list, I’m dining out
four times next week. Where do you go on Sundays?’

‘Oh,
here and there,’ Ronald said, ‘there’s always somebody.’

‘I go
to Leighton Buzzard if anyone comes home to keep Ma company,’ said Martin. ‘It’s
rather fun and a change at Leighton Buzzard. But if Isobel stays in London I go
to her in London.’ They had crossed the road.

‘I’ve
left my paper in the café,’ Ronald said inexpertly. ‘I’d better go back and
fetch it. See you some time.’

‘Feeling
all right?’ Martin said, as Ronald turned on the kerb to cross back over the
road.

‘Sure?’
— for Martin was touchily aware of Ronald’s epilepsy.

‘‘Bye.’
Ronald had crossed over.

He
found the paper. He sat down again in a seat opposite the one he had recently
occupied so that he could the more easily see the silver-yellow-haired man as
he spoke in low tones effortful with convincingness, to the black-haired girl.
Ronald ordered coffee and a cream cake. He opened his paper, from the side of
which, from time to time, he watched the man who was deeply explaining himself
to the girl. Ronald could not decide where he had seen the man before; he could
not even be sure of having done so. ‘I’m becoming a prying old maid,’ he said
to himself as he left, to explain his return to the café, preferring to call
himself a prying old maid than to acknowledge fully his real reason: that he
had been simply testing his memory; for he could not leave alone any
opportunity to try himself on the question whether his epilepsy would one day
affect his mental powers or not.

‘No,’ the American
specialist had said, irritable with the strain of putting a technical point
into common speech, ‘there is no reason why your intellect should be impaired
except, of course, that you cannot exercise it to the full extent that would be
possible were you able to follow and rise to the top of a normal career. But
you ought to retain and indeed expand your present mental capacity. The
seizures will be intermittent; let me put it that your seizures concern the
brain but not the mind. You will learn to prepare for them physically in some
degree but not to control them. They won’t affect the mind except in so far as
the emotional psychological disturbances affect it. That’s not my department.’

Ronald
had retained every one of these words importantly in his memory for the past
fourteen years, aware that the specialist himself would possibly remember only
the gist, and then only with the aid of his record cards. But Ronald held them
tight, from time to time subjecting the words to every possible kind of interpretation.
‘Let me put it that your seizures concern the brain, not the mind.’ But he
believes, Ronald argued with himself at times throughout the years, that the
mind is part of the brain: then why did he say ‘Let me put it that….’ What
was his intention? And anyhow, Ronald would think, I can manage. And anyhow, I
might never have been able to follow and rise to the top of a normal career.
What is a normal career? The law: closed to me; — but, his friends had said,
you need not put in for Lord Chancellor, you could be a successful solicitor.
Oh, could I? — You haven’t seen me in a fit. The civil service: closed to me.
No, not at all, said his advisers. Medicine, teaching, get yourself into a
college, try for a fellowship, you’ve got the academic ability — you know what
some of the dons are like, there wouldn’t be anything odd….

‘I
could never be first-rate.’

He had
been twenty-three, a post-graduate, when the fits started, without warning,
three months after he had turned his attention to theology. The priesthood: closed
to me. Yes, said his friends, that’s out; and, said his theological
counsellors, it never would have been any good in any case, you never had a
vocation.

‘Because,
in the event, you can’t be a priest.’

‘That’s
the sort of retrospective logic that makes us Catholics distrusted.’

‘A
vocation to the priesthood is the will of God. Nothing can change God’s will.
You are an epileptic. No epileptic can be a priest. Ergo you never had a
vocation. But you can do something else.’

‘I
could never be first-rate.’

‘That
is sheer vanity’ — it was an old priest speaking —’you were never meant to be a
first-rate careerist.’ Only a first-rate epileptic?’

‘Indeed,
yes. Quite seriously, yes,’ the old priest said. It was at a time when he was
having convulsions three times a week that he had allowed himself to be taken
by an itinerant specialist to a research centre in California, with the purpose
of submitting to a two years’ clinical trial of a new drug. He was one of sixty
volunteers from five to twenty-eight years old. Ronald lived in a huge
sun-balconied hostel. Some of the other fifty-nine were mentally deficient.
Most were neurotic. None was highly intelligent. Of the total sixty patients
three failed to respond to the drug, and of these Ronald was one. Of these
three, Ronald succumbed to the dreaded
status epilepticus,
enduring fit
after fit, one after the other in rapid succession, only four days after the
treatment had started.

‘This
is due to emotional apprehension,’ Dr. Fleischer told him when, after a week,
he lay partially recovered, thin and exhausted, in a cool green and white room
with the sun-blinds down. ‘You may withdraw from the experiment if you wish,’
Dr. Fleischer said. ‘Or you may continue with profit.’ Dr. Fleischer’s time and
mind were largely occupied with the fifty-seven epileptics who had already
begun to respond favourably to the new drug.

When
Ronald was up and shakily walking about, drowsy from the effects of his usual
drugs, he weighed up for himself the price of his possible cure. The patients
who were responding to Dr. Fleischer’s treatment were all around him, they
seemed even sleepier, drowsier than he — but, thought Ronald, this is not far
from their normal condition, they were born half-awake.

‘The
new drug is successful,’ the smart fresh-lipsticked young research woman told
him. ‘The drug has been found to have anti-convulsant and sedative effects on
rats, and now it looks like being successful with the majority of patients
here.’ She smiled through her rimless spectacles with eyes far away, on the
job, efficient, creamy-complexioned, first-rate.