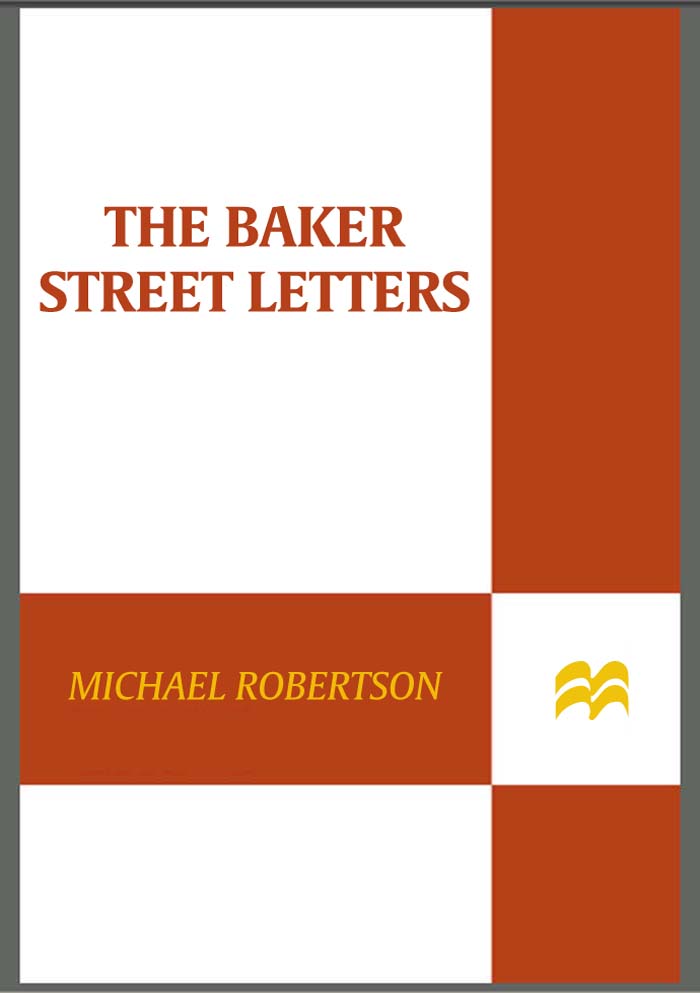 Preview:
The Brothers of Baker Street

For the publication of this book, I'm grateful to my editor, Marcia Markland, and my literary agent, Rebecca Oliver, and to the Maui Writers Conference, which introduced me to them both.

My thanks also to Diana Szu, Elizabeth Curione, Sona Vogel, Elizabeth Catalano, and David Rotstein at Thomas Dunne Books/St. Martin's Press, and to Richie Kern (for representing the television rights) and Laura Bonner (for the audio) at the Endeavor Agency.

And thank you, Barbara and Michele.

He only wanted just one cigarette.

He knew he shouldn't, and not just because both of his ex-wives used to say so or because his doctor still said so.

He knew he shouldn't because the company rules for sandhogs on the new subway dig said so.

But the rules hadn't been pulling twelve-hour shifts.

And the hot permits for acetylene torches had already been granted, so he knew there wasn't any flammable gas.

And he really only needed just one.

So he moved farther into the tunnel, beyond the shining fresh concrete, away from the flammable plastic liners, and out of sight of the foreman. He sat on a muck hauler to take his break, and he took out just one cigarette and put it between his lips.

And then he lit a match.

“Why are you staring at me that way?”

Laura hardly looked up from her dinner to ask this. She arched one eyebrow over one olive green eye.

“Your hair,” lied Reggie, “is in your champagne.”

She laughed, and Reggie hoped it was because she remembered a September picnic in Kensington Gardens, when her red hair had indeed been in the champagne, and pretty much everywhere else.

He wanted her to think of that, because tonight, with moonlight streaming into his Butler's Wharf penthouse, he was beginning to fear that she did not intend to let it down at all.

Nor had she the week before. And so Reggie had begun to stare.

But now there was a noise from the kitchen, and Mrs. Hampsteadâwho should have been getting ready to bring out Blackwell tartsâbrought the phone instead.

“It's your brother,” she said.

“I'll return it in the morning.”

“Your brother!” Mrs. Hampstead said emphatically, thrusting the phone again between Reggie and Laura. “He says it is urgent.”

“Tell him I'll call him back,” repeated Reggie. “In the morning.”

“Suit yourself. Just as though he's not the only brother you've got.”

Mrs. Hampstead had an uncanny knack for spouting phrases that Reggie used to hear from his mother.

“Quite right, Mrs. Hampstead,” said Laura. “Reggie, there's no use in being stubborn.”

Reggie looked across and tried to read Laura's expression, but she did not meet his gaze.

He accepted the phone and spoke brusquely.

“I can't explain it over the phone,” said Nigel. “You'll have to see it for yourself.”

The concern in his younger brother's voice was evident, but to Reggie that was not proof of a crisis. At thirty-three, Nigel was just two years younger than Reggieâbut the brothers did not always rate the crises of life on the same scale.

“I'm sure it can waitâ,” began Reggie.

Laura looked up from her plate. “It's all right,” she said, and she glanced at her watch as she said it. “I should be going anyway.”

Reggie tried quickly to see her eyes, but she looked away again.

“I'll be along shortly,” he said, annoyed, into the phone.

Laura gathered a cream-colored wrap around bare, freckled shoulders, and they took the exterior lift down from the penthouse.

They walked from the shining metal-and-glass lift onto the wharf and then got in Reggie's XJS.

For a long moment, as they drove along the Embankment, with the damp air and river scents being stirred up by a light rain, neither of them spoke.

Then Laura said, “You shouldn't be so sharp with your brother.”

“I'm aware of that,” said Reggie, and he was, though he was tired of having to think about it. “My mind was on something else,” he said.

“I'm tired tonight anyway,” Laura replied, and then added, “I'm sure it will be late when you're through.”

Reggie thought she said this as though she were relying on it. This was worrisome. He said, “I was just beginning to think I'd found him a position he couldn't bollix up. And this was only because his predecessor came back from holiday in America and stepped in front of a double-decker. You can't count on breaks like that for all your positions.” Reggie realized he was speaking sharply again, and he fell silent.

“The poor man,” said Laura, and Reggie, to his astonishment, realized that he was becoming jealous now even of her sympathy. Sympathy for a stranger, for that matter. For a dead stranger, in fact.

“Must have forgotten which way the traffic moves,” added Laura.

He turned right onto a narrow Chelsea street and then into the drive for Laura's ivy-covered brick mews.

They walked on damp flagstones through the front courtyard. Then Laura stood in the doorway, kissed Reggie once lightly, and said good night. He wondered just what alternative
plans she might have for the remainder of the eveningâbut he managed not to ask.

He got in his car and drove around the eastern perimeter of Hyde Park toward Marylebone. He continued almost to Regents Park and then turned south onto Baker Street.

He drove half a block and then parked. He was now at Dorset Houseâa structure that headquartered the Dorset National Building Society and that made up the entire Two Hundred block of Baker Street.

It was late as Reggie entered the building, and the lobby was deserted except for a security guard, who nodded as Reggie passed by.

Reggie crossed to the lifts, his footsteps echoing on the marble floor.

He had just recently leased the next floor above for his new law chambers. The location was uncommonly far from the Inns of Courtâfew barristers in London had chambers beyond easy walking distance of the Inns and their clubbinessâbut Reggie was willing to break that convention. And the lease from Dorset National was at a very decent bargain. Such a good deal, in fact, that at first he had been suspiciousâbut he was beginning to accept it now as just good fortune.

He took the lift up one floor and stepped outâalmost knocking down Ms. Brinks, who was trying to step in.