Read The Becoming - a novella Online

The Becoming - a novella 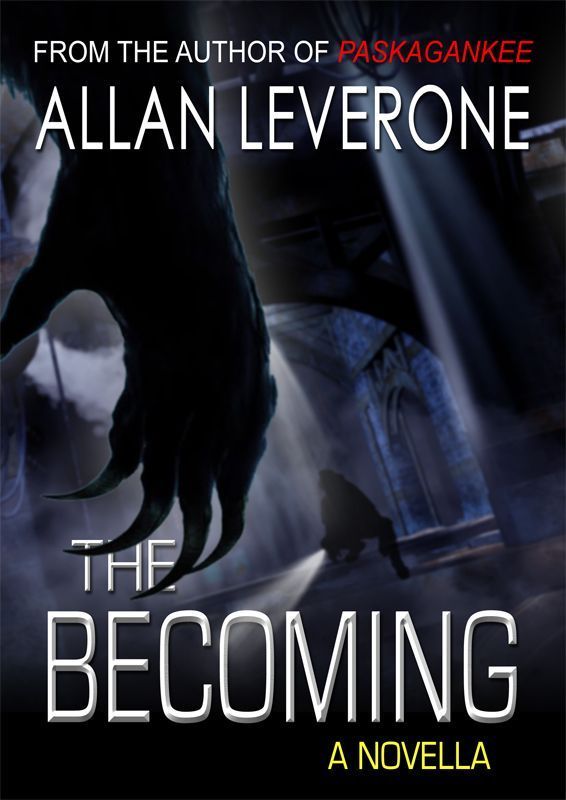 All rights reserved as permitted
under the U.S. Copyright Act of 1976. No part of this publication may be used,
reproduced, distributed or transmitted in any form or by any means, electronic
or mechanical, including photocopying, recording, or by any information storage
or retrieval system, without the written permission of the author, except where
permitted by law, or in the case of brief quotations embodied in critical
articles and reviews.

This is a work of fiction. Names, characters,
places, and incidents either are the product of the author’s imagination or are
used fictitiously. Any resemblance to actual events, locales, or persons,
living or dead, is unintended and entirely coincidental.

For my wife, Sue: The patience you
exhibit while I indulge my obsession for making stuff up and writing it down is
awe-inspiring. As always, thanks for your unflagging support.

Special thanks to Neil Jackson for
the breathtaking cover art…

“Suspenseful and well-written,
The
Lonely Mile
shows how far a father will go to save his child.”

“Written with edge-of-your-seat
suspense and precise detail…The successor to Michael Crichton has landed. And
his name is Allan Leverone.”

—Vincent Zandri,
Amazon bestselling author of
The Innocent
and
The Remains

“Allan Leverone delivers a taut
crime drama full of twists and conspiracy. A serial killer thriller with a
heart.”

“Allan Leverone raises the stakes
with every turn of the page…”

“Thriller fans will enjoy Allan
Leverone’s new book,
The Lonely Mile,
which will carry readers along as
a daughter is stolen by a vengeful serial killer.”

“A dark and creepy chiller!”

“Fast-paced and eerily seductive,
Darkness
Falls
is a well-told and atmospheric tale of loss and obsession, of madness
and revenge. Allan Leverone is a terrific writer with a bright future…”

“I was floored by the great
writing…this book is a steal for anyone that is a fan of a good crime
thriller.”

“…a chillingly realistic suspense
thriller that will have you holding on for the ride of your life.”

“…this story drew me in, grabbed my
attention and would let go until the very surprising and climactic ending…one
hell of a roller coaster ride…”

“From page one to the end you will
be breathless with suspense…simply an entertaining and enjoyable and intense
story…This is one of the things that I love about book blogging—finding new
authors from smaller presses that are true gems.”

“If you enjoy thrillers…this is a
great option. It’s a fast-moving storyline…and you’ll find you care about the
main characters…”

“…feels like I’m watching an
episode of
24.
There is not a dull moment, and absolutely no lag
time…The characters are well developed, and I find the plot easily believable
and very easy to get absorbed in.”

“…keeps you on the edge of your
seat, reading pages as fast as you can…I highly recommend that you read this
book…you will not be disappointed.”

—Two Ends of the
Pen

“…absolutely fantastic…The story
moves along at a good pace, dripping with atmosphere…The frights come at you
hard and fast…A great story, believable characters, tension, atmosphere,
frights galore, blood, and a nice twist at the end…”

“…the storyline was haunting and
creepy…I would recommend
Darkness Falls
to anyone who enjoys a really
nightmarish tale.”

Other
Novellas by Allan Leverone

Postcards
from the Apocalypse

Uncle
Brick and the Four Novelettes

The handcar’s rusty iron wheels
squealed out a song of complaint as the big box wound its way deep into the
earth. Karl Meyer shuffled along behind it, weary after a long day, counting
the minutes to the end of his ten hour shift. Seventy-five to go. Glittering
black coal dust caked his boots, his jumpsuit, his helmet and every inch of
exposed skin.

Karl guided the
car—empty now, but soon to be filled almost to overflowing with black
Pennsylvania gold—around corners, along straightaways and through switchbacks,
moving ever farther from small entryway back at the surface. The Tonopah Mine
had been in continuous operation since the mid 1850’s, and over the ensuing
seventy years a complex network of underground tunnels had been engineered.

Many of these
tunnels had been sealed off, mined until the coal was played out and then abandoned.
Rusting signs nailed to rotting two-by-fours placed in gigantic X’s across mine
shaft entrances warned miners DANGER—TUNNEL CLOSED! Some of the signs had been
in place so long they were virtually unreadable. Karl passed them all without a
thought and kept going.

Karl Meyer was a
trammer, a mine worker whose job it was to run the empty container along the
tracks to an active mine shaft, fill it with coal, then muscle the now-heavy iron
box back to the surface, where it would be unloaded and he would begin the
process again.

It was now 10:45
p.m., and this would be Karl’s final run of the night. By the time he made his
way to the shaft in use—Charlie Five was the shaft’s rather unromantic name—loaded
his car with coal, and worked his way back to the surface, his two to midnight
shift would be just about over. He would have enough time to clean up in the
crowded shack employed as a base building by the Tonopah Mining Company before
clocking out and trudging down the street to The Lucky Shamrock Bar—Tonopah
Mining owned and operated, of course—to exchange some company scrip for a few
beers.

Karl moved slowly
along the main shaft. For an operation as busy as Tonopah Mining, he was continually
amazed at how deep into the earth he could travel without setting eyes on
another human being. He could hear workers every now and then; sound played
tricks on the senses down here, so far beneath the earth’s surface.
Long-abandoned mine shafts and tunnels to nowhere and unreliable ventilation
all combined to result in strange, eerie sound patterns.

Snippets of overheard
conversation might float through the air as if miners were near, but the shaft
would be empty. Weird, toneless noises, ululations like the cries of a loon on
a lonely lake, would begin without warning and end just as suddenly. Pockets of
dead air would float through tunnels for no apparent reason, warm and thick and
stifling as opposed to the cool dampness typical of a tunnel hacked into the
earth hundreds of feet below its surface.

Men had died down
here, dozens that Karl knew of over the seven-plus decades the mine had been in
operation. Coal mining was a difficult, dangerous job and the risk of violent
death was a constant companion to miners, but that was especially true in the Tonopah
Mine. Here safety standards were generally lax, the miners viewed by management
as interchangeable parts; replaceable cogs in the operation.

The old timers
told stories of shadowy creatures living in the far reaches of the deepest
closed-off mine shafts, of hideously deformed monsters skulking through the
darkness, stalking miners and wreaking havoc on them. There were stories of
good men who had walked into the mine and simply disappeared, vanishing into
thin air, their bodies, clothing and tools never recovered.

Karl had heard all
the stories, plenty of times. He tried to ignore them. Working ten hour shifts
six days a week, three-quarters of a mile under the earth’s surface was hard
enough to handle without adding superstitious nonsense to the mix. He was an
uneducated immigrant with a wife and three hungry children to support, and Karl
knew he was lucky to have a job at all. So he wasn’t about to complain, about
the difficulties of the job or about the stupid stories told by a bunch of old
men with coal dust lining their lungs and overactive imaginations or—

Something smashed
into Karl’s empty coal cart and bounced off, sending a loud gong reverberating
through the mine shaft. He ducked reflexively and jumped back, then gazed into
the murky semi-darkness at the edge of the six-foot-wide shaft. A jagged rock,
roughly the size of a baseball, settled into the dust of the ancient shaft
floor, spinning a couple of times and then falling still.

Karl had been
pushing his cart, lost in thought, rolling it past the entrance to one of the
oldest and deepest closed-off shafts in the entire mine. Alpha Seven it was
called, and it had been abandoned for as long as Karl could remember. Hell,
even old Sandy Schaefer, at sixty the oldest and longest-tenured Tonopah Mining
employee, had never stepped foot into Alpha Seven and couldn’t remember a time
when the shaft had been active.

It was also one of
the shafts rumored to be haunted.

But of course that
was ridiculous. Karl stood at the corner of the long-abandoned Alpha Seven and
peered as far into the tunnel as he could, which wasn’t far at all. The light provided
by incandescent bulbs strung too far apart on frayed wiring was weak and insufficient
even in the active portions of the mine; the abandoned shafts were as dark as a
hooker’s heart, as Karl’s father would have said.

“Hello?” Karl
attempted, cupping his hands and directing his voice down the inky blackness of
the long-dead shaft. “Who’s there?” The sound fought its way into the tunnel
and then seemed to give up. There was no echo, no indication anyone could hear
him.

There was also no
reason to believe anyone would. Who the hell would be hanging around in the unrelenting
darkness of Alpha Seven? And for what purpose? No one would have known Karl—or
anyone else—would be passing by at this exact moment, so even in the unlikely
event someone wanted to pull a prank, that person would have had no way of
determining when a potential target might appear.

Karl took a step
into Alpha Seven, then two. “I said who’s there?” he repeated, more forcefully
this time.

He turned back
toward his mining car, shaking his head, and the moment he did, another rock
whizzed past, this one so close to his helmet the displaced air tickled his ear.
It passed directly over his cart and smashed into the tunnel wall on the other
side.

“Goddammit!” he
shouted, and that was when the explosion occurred.

A muffled roar marked the blast,
and then a wall of compressed air rolled through the tunnel, invisible but unstoppable.
It knocked Karl to the ground seconds after the ragged boom echoed down the
chambers. He covered his head with his arms as he fell and rolled over once,
striking Alpha Seven’s side wall, instantly forgetting about nearly being
beaned with a rock.

Of all the
potential dangers posed by earning a paycheck under the earth’s surface, fire
was the worst. It was worse than a cave-in by far, because after a cave-in, unless
a miner was unfortunate enough to be standing in the exact spot of the tunnel’s
collapse, the possibility of rescue was high. He simply stayed where he was and
waited. Collapsed tunnels could be re-dug and reinforced.

But fire was
different. In addition to the obvious danger of being blown to bits or burned
alive, fire meant smoke and smoke meant toxic fumes which had nowhere to
disperse other than through the tunnels.

And fire lived on
oxygen. A raging inferno could suck all of the available air right out of a
shaft in minutes, leaving trapped miners gasping for breath like fish out of
water, suffocating them, condemning otherwise perfectly healthy men to a
horrific death, writhing in the dirt, clutching at their throats as their lungs
burned not from fire but from lack of air.

M or F? by Lisa Papademetriou
Witch Island by David Bernstein
Fallen Darkness (The Trihune Series Book 2) by Austin, RB
The Lightkeeper's Daughter by Iain Lawrence
The Barcelona Brothers by Carlos Zanon, John Cullen
Thief of Hearts by L.H. Cosway
Breathe You In by Lily Harlem
The Witness on the Roof by Annie Haynes
The Gladstone Bag by Charlotte MacLeod
Should Have Killed The Kid by Frederick Hamilton, R.