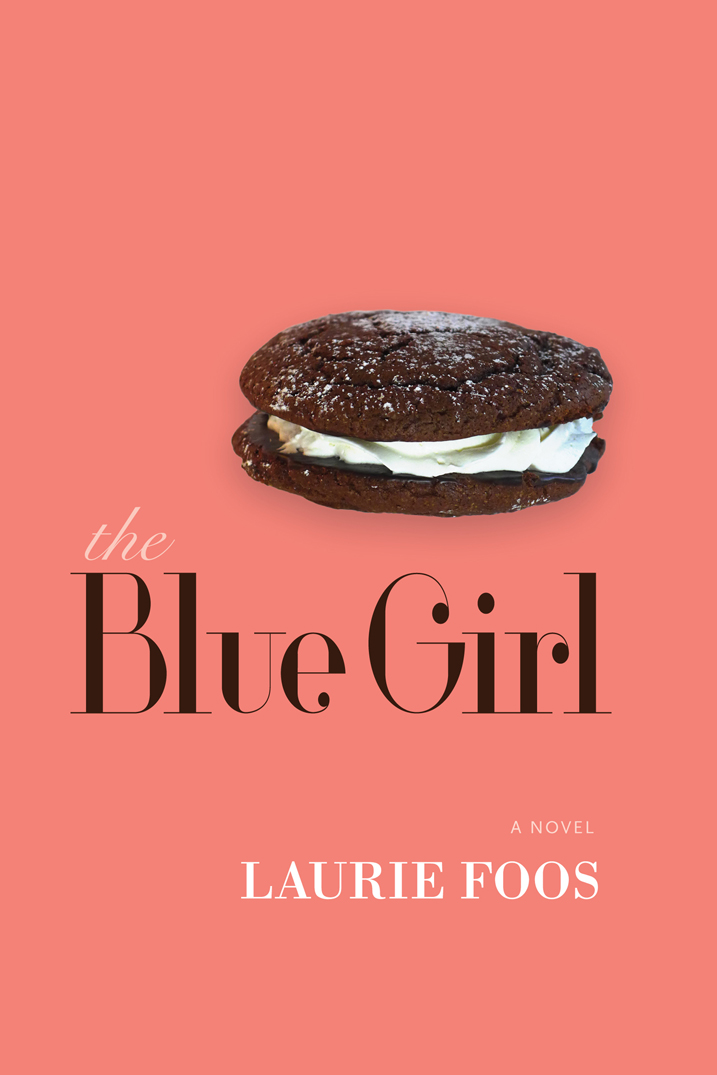 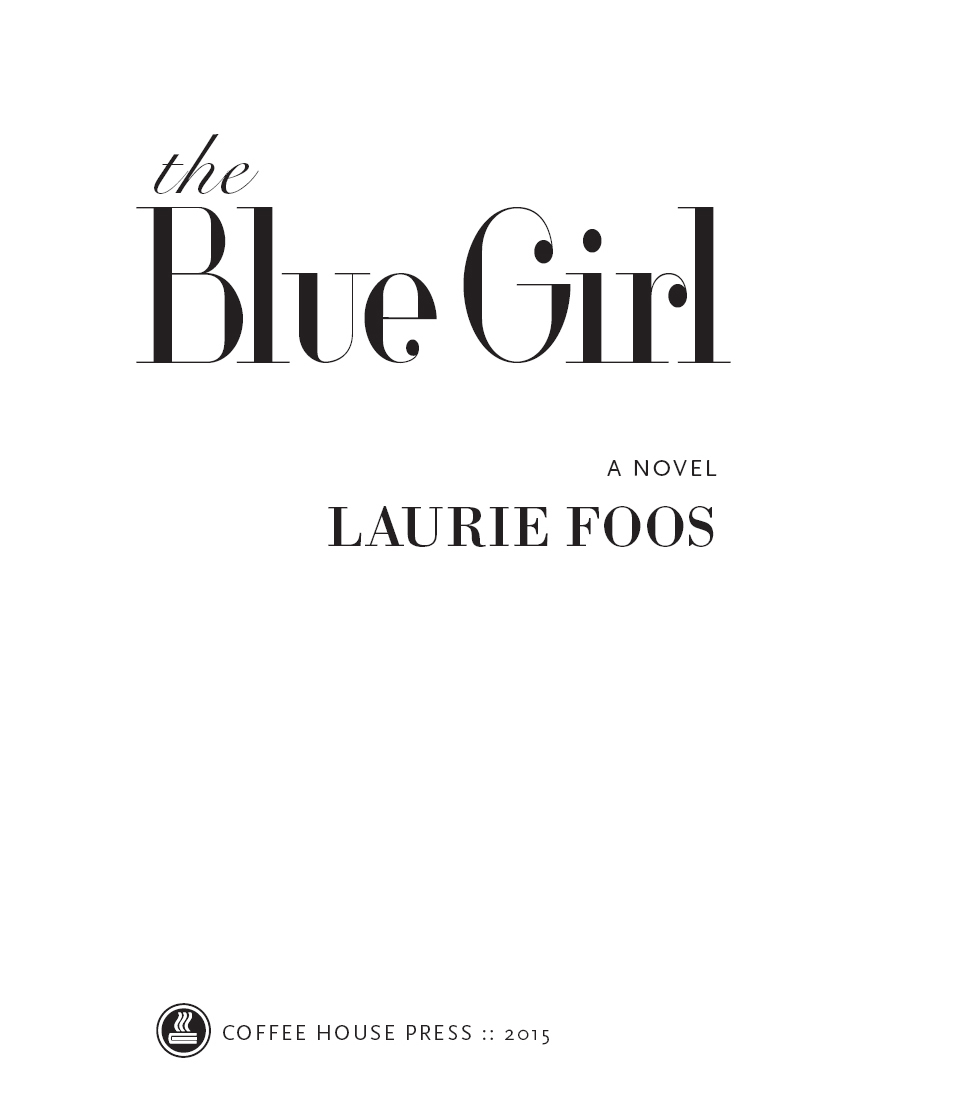 Coffee House Press books are available to the trade through our primary distributor, Consortium Book Sales & Distribution,
cbsd.com
or (800) 283-3572. For personal orders, catalogs, or other information, write to:
[email protected]
. Coffee House Press is a nonprofit literary publishing house. Support from private foundations, corporate giving programs, government programs, and generous individuals helps make the publication of our books possible. We gratefully acknowledge their support in detail in the back of this book. Visit us at
coffeehousepress.org
.

Sections of this book have previously appeared in
Solstice: A Magazine of Diverse Voices
, the
Rake
, and
Wreckage of Reason: An Anthology of Contemporary XXperimental Prose by Women Writers
. “Moon Pies,” an excerpt, was awarded second place for the Calvino Prize in 2007.

for Ella and Zachariah
,

in memory of my mother, Anna Foos

T
HE BLUE GIRL EATS SECRETS IN MOON PIES. SHE
takes them in, her mouth and lips smudged white against her blue skin, tongue clacking at the roof of her mouth, crumbs dribbling down her chin. We present them to her in the quiet of her room while she lies beneath the old, pitted, gray comforter and sucks in ragged breaths. Slowly her eyes close as we pass our secrets across the bed and into her hands. We watch as she swallows them, sometimes whole, sometimes in excruciating bits. Sometimes, when the old woman who lets us into the house draws near, the girl gasps or twists her mouth, but mostly she seems to enjoy them, her lips pursed with the sticky surprise of the things we have come to offer her, the things that she has come to take.

The old woman just opens the door to the girl's bedroom and lets us in, one at a time. Magda is first, and then Libby always last, and I am in the middle, because it doesn't
matter to me when I go in since it was my daughter, Audrey, who saved her, on that day she almost drowned, that day that everything changed.

She breathes in her quiet way when I feed her the moon piesâmoon pies that are never store bought, the ones it takes so much time to bake, to press pieces of my life into round cakes filled with sweet marshmallow cream that occasionally sticks in her throat. She smiles at me when she is finished, and on days when I am brave, I reach forward and wipe her lips with a handkerchief that I keep hidden beneath my wallet and lipstick, empty gum wrappers and tissuesâthe things that mothers my age so often carry with them.

She began eating our secrets after that first time she tried to drown. It was not something we had expected she might do. We did not know where she had come from, what her name was, or why she was blue. We still don't. Some of us have theories. There are whispers that the families who come to summer in the cottages can hear her wheezing through the trees that surround the lake. Some people say that her breath keeps them awake at night, but I never hear it, not even when all the windows are open and I lie in bed listening.

Some say she swallowed a bottle of Drano when she was a child, and that the poison that raged in her throat
left her speechless and blue. But none of us knows why her skin remains mottled and bruised, why she doesn't burn in the sun like the other girls in town, why she doesn't speak to any of us. We do not know who the old woman is, and we know the blue girl will never tell. We do not know her name, not even now, after we have offered her our secrets and watched her swallow them whole.

The day she almost drowned we went out to the lake. It was the end of summer, just after Labor Day and before the first day of school, when the cottage people had finally packed up and gone. Magda and Libby and I had piled our teenage girls into our cars and had driven out to enjoy the lake without the crush of all those summer mothers and their children who left food and toys in the sand, and their husbands who drank too much beer and often came only on weekends.

I'd left my son, Buck, at home, even though he begged to come, hopped up and down and screamed at me in a voice I'd never heard. Perhaps, we thought, that if we saw the blue girl in the lake as it was rumored that the summer people had, we might come to know her, though even then I think we realized that knowing her was not going to be possible.

That day on the lake the sun raged and blistered our
daughters, each of them fifteen and seeming to want to burst free of their bathing suits: my Audrey, Magda's Caroline, and Libby's striking Rebecca. We kept them close to us on the beach towels and watched them slather themselves in oil. They sprayed their hair with lemon juice and smiled at each other but never at us. Their faces turned pink from sunshine, pink as with new life. We sat in a row at the shoreline and looked down at our freckled arms, the three of us squinting even under the heavy straw hats we wore to protect us. We were vain then and did not want wrinkles to drive our husbands further away from us, men who already shrank away when we reached for them, shrank at the feel of the stubble on what had once been smooth armpits and creamy thighs. We did not want our daughters to suffer these indignities. We wanted more for them.

We sat with our daughters at the beach, each of us with sons at home who could be unruly, especially Libby's poor Ethan, eighteen and unmanageable, with his flat ears and eyes that did not focus. We sat with our daughters, free of the sons who so often drained us, and at first we didn't see the blue girl. Our daughters jumped up and pointed at her swimming along the horizon, out past the buoys, but still we did not see. Audrey glared at me and turned her face away from mine, as she'd been doing for so long,
and I pulled my hat down low over my brow and tilted the umbrella to shade her.

The daughters had been leaning together, whispering, when the blue girl began to thrash. At first the water foamed above her, white sparks flying in the air like tiny geysers, but then the water seemed to open up and amass itself into a glittering whole. Someone screamed, and our sunhats blew off our heads, our cellophaned sandwiches kicked by the wind.

That girl is drowning!
someone shrieked, a woman's voice, and at first I thought it came from one of the summer mothers who always seemed to be accompanied by a gaggle of little girls in striped bikinis.

The girl!
came the scream.
The girl out there is drowning!

I looked around for one of the cottage mothers who had lagged behind, one of those with an accent unlike ours, with a husband who did not watch his children. Only then did I realize the scream had come from Magda. One of the daughters screamed, and yet we did not move. We did not throw off our sunhats, our glasses, and our caution to save her.

Only Audrey, my Audrey, ran to the water's edge before I could say or do something to keep her with me. She leaped into the lake, diving into the space where the rocks below the water lurked, and swam with her arms
flying and water sputtering from her lips to grab the girl's arms and drag her to the water's edge.

The girl was lying on her back in the sand, and we stood above her, staring down at her motionless blue body turning bluer with every second that passed. We covered her body in shadow, as if this were the one thing we knew how to do. I felt the sun burning my arms as Audrey pressed her ear to the blue girl's lips and said in a flat, accusing voice,
She's not breathing
.

We said nothing. We, the mothers of these young girls, did nothing to help her. We simply stood and waited as Audrey pounded on the girl's chest, over and over, her hands slamming into the jutting rib cage. We, who had failed so many times, in so many ways, failed to help the blue girl return to life.

Slowly, Audrey turned the girl on her side, the swirls of veins and blood pooling in her bare arms and back, and clapped her between the shoulder blades, once, twice, three times, and still no sounds came from her lips, no breath surged in her lungs. Our daughters said,
Do something, do something
, but we did not, we could not. We did not want to touch her, not then, as much as she fascinated us with her blue hands and chest, the blueness now darkening all over.

Even then I knew that Audrey was not afraid of her, as Magda and Libby and I and most of the others in our
small town had been. We watched, hovering, as Audrey fitted her mouth over the blue girl's lips and blew air into her lungs. We held our breath until she opened her eyes, looked up at us standing above her, and sighed.