Read The Blythes Are Quoted Online

The Blythes Are Quoted 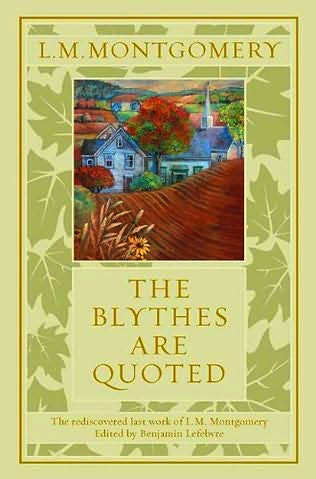 THE
BLYTHES
ARE
QUOTED

THE
BLYTHES
ARE
QUOTED

Edited and with an
Afterword by
Benjamin Lefebvre

All rights reserved. Without limiting the rights under copyright reserved above, no part of this publication may be reproduced, stored in or introduced into a retrieval system, or transmitted inany form or by any means (electronic, mechanical, photocopying, recording or otherwise), without the prior written permission of both the copyright owner and the above publisher of this book.

The Blythes are quoted / L.M. Montgomery ; edited
and with an afterword by Benjamin Lefebvre ;
foreword by Elizabeth Rollins Epperly.

Some Fools and a Saint ~

“The Old Path Round the Shore” ~

“Guest Room in the Country” ~

An Afternoon with Mr. Jenkins ~

“Farewell to an Old Room” ~

The Pot and the Kettle ~

“Oh, We Will Walk with Spring Today” ~

The Road to Yesterday ~

A Note on the Text
~

Even for those who know and love L.M. Montgomery’s twenty other novels, hundreds of short stories and poems, diaries, letters, and scrapbooks, this first-time publication of the full text of
The Blythes Are Quoted
will bring sharp surprises. It may be a fractured work, even full of splinters, but I am drawn through its parts and pieces by Montgomery’s power to make me care.

The Blythes Are Quoted
is the last work of fiction the world-famous author of
Anne of Green Gables
prepared for publication before her untimely death on April 24, 1942. It has never before been published in its entirety. Why? The publishing history of
The Blythes Are Quoted
involves mystery; the very appearance of the current volume is a triumph of several kinds.

Until now, the full text of
The Blythes Are Quoted
has remained something of a secret, and largely enigmatic. The typescript was delivered to Montgomery’s publisher on the day she died—by whom we do not know; Montgomery evidently intended it for publication, since it is amended in her hand-writing. The collection is mentioned in her obituary in the
Globe and Mail
newspaper (see Afterword for details), but for many years it never appeared. The frame story takes Anne Shirley Blythe and her family a full two decades beyond anything else Montgomery published about them. Surely her publishers would have been delighted to issue a book that took Anne right up to the current day? It wasn’t until 1974 that another publisher decided to bring the book out, but not before changing the title and recasting the work completely. The typescript they used lacked the longest story, “Some Fools and a Saint,” and they stripped out all but one of the original forty-one poems and all the interconnecting vignettes featuring Anne and family, and then rearranged the remaining stories as though the book had been intended to be merely another volume of short fiction. Editors in 1942 and 1974 were evidently troubled by aspects of the book; what disturbed them may be precisely what will intrigue readers today.

Was the book deliberately suppressed as too volatile? The world was aflame with war at the time of Montgomery’s death. After the bombing of Pearl Harbor in December of 1941, the Americans had joined the Allies, and by the spring of 1942, the whole globe must have seemed locked in a death grapple, the very kind Montgomery had perceived in the First World War. She had described the Great War with patriotic ardour in
Rilla of Ingleside
(1921), the last of the original Anne series. The two Anne novels written during the war itself,
Anne’s House of Dreams
(1917) and
Rainbow Valley
(1919), were meant to hearten the home front and the trenches with images of the sacred beauty of home, a home imperilled by war.
The Blythes Are Quoted
does not applaud war; its poetry and interludes—the very shape of the book—call war and its rhetoric into question.

Perhaps her publishers in 1942 were unwilling to tamper with Montgomery’s text but could also not countenance publishing a work framed to address war. Montgomery introduced and ended the book with war pieces, and she divided the collection into two parts, with the First World War as its pivotal point. She linked the two world wars at the very outset of the book by leading with her poem “The Piper.” Probably inspired at the time Montgomery wrote
Rilla of Ingleside
by John McRae’s “In Flanders Fields,” Walter’s “Piper” became famous overnight and symbolized the war effort within the story but was never produced in the novel itself. Montgomery explains in an authorial note in
The Blythes
that she had only recently written the poem, believing it even more appropriate for “now” (the Second World War) than earlier (in the First World War). A lacklustre lyric, Montgomery’s “Piper” is also a tepid endorsement of war. Its weakness is underscored by the fact that the volume ends with another war poem, also by Walter, but “The Aftermath” is a gripping, agonizing piece in the manner of Wilfred Owen or Siegfried Sassoon. Walter’s last poem is followed by a final dialogue between Anne and her son Jem, now himself the father of sons ready to go to war. In one line, Anne delivers a scorching indictment of the First World War, if not the Second.

In 1974, whether or not the editors were perturbed by the war references, they were certainly disturbed by the book’s shape. Their solution was to cut out the frame story entirely and to eliminate many of the remaining stories’ references to war. Montgomery had created a two-part text, with Part One set before the First World War and Part Two beginning after that war and concluding after the start of the Second World War. Interspersed through each part were short vignettes or dialogues, evenings where Anne reads poetry aloud to various family members and they briefly comment. Between the vignettes, and sometimes in provocative relationship to them, Montgomery placed the short stories, singly or in groups. Each story contains references to, quotations from, or even brief appearances by one or more of the Blythe family members. The poems and dialogues capture intimate moments with the Blythe family, and the stories offer glimpses of them within a larger surrounding community. The 1974 editors retained the internal story references to the Blythes but removed the context in which the use of the Blythes as a touchstone makes sense. Instead, the 1974 editors hoped for shock value. They made their collection of stories begin and end with themes they hoped might startle readers who may have come to accept as true the modernist debunking of Montgomery as a sunny, one-song warbler. Beginning the book with “An Afternoon with Mr. Jenkins,” about a man newly released from prison and his encounter with a son who does not know him, and ending with “A Commonplace Woman,” involving a dying woman’s satisfied recollection of an undetected murder, the 1974 editors replaced Montgomery’s controversial war framework with a controversial arrangement of their own.