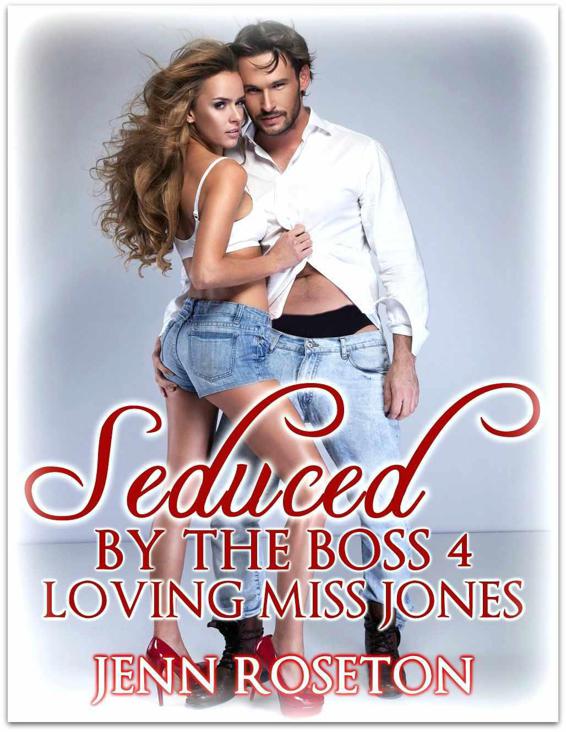 No
part of this publication may be copied, reproduced in any format, by
any means, electronic or otherwise, without prior consent from the
copyright owner and publisher of this book.

This
is a work of fiction. All characters, names, places and events are
the product of the author's imagination or used fictitiously.

This
is the fourth and final installment of the Seduced By The Boss
series. I've tried to include as much background information as
possible, in case you haven't read the previous three titles in the
series, but in order to get the full picture of the subplot involving
sneaky Matt, I feel you need to at least read
Seduced
By The Boss 3: For Her Pleasure

However, I think you'll
still be able to enjoy this installment even if you haven't read the
previous titles.

Jemma Jones unlocked the
office door of Sinclair Consulting. She’d just spent an
amazing weekend with Adam Sinclair, her boss and lover, but now it
was 9am Monday morning; time for the work week to start.

Adam had left her
apartment earlier this morning and gone home to change before coming
to the office. Her stomach fluttered as she thought about their
love-making last night. Adam had dedicated the whole weekend to her,
as they had been so busy at work recently that they hadn’t had
much time to spend together outside the office.

Of course, sometimes they
had a lot of fun inside the office. When there was a lull at work,
Adam would lock the inner door of his successful one man office and
give her some
very
personal attention.

She’d been dating
Adam for a month now, and sometimes she still couldn’t believe
that she was dating her hunky boss. As soon as Jemma had started
working for him, she’d privately nicknamed him Mr. Sexy
Sinclair. His dark hair, ocean blue eyes and trim, muscular physique
made her pulse race every time she was near him.

That had been 19 months
ago, and she’d immediately been attracted to him, until one day
she realized she’d actually fallen in love with Adam. It had
been hard to conceal her feelings, especially since her love life had
been pretty much in the doldrums, but everything
had changed
four weeks ago when Adam invited her to lunch.

At first, Jemma had been
worried she was going to get fired, but when Adam made it clear that
his intentions were romantic, she
’
d
found it hard to breathe. After all, she had boring light brown,
shoulder length hair, brown eyes, and a girl-next-door face. It
wasn
’
t as if she was a stunning blond
with big breasts and a look-at-me personality.

But when Adam promised
that if it didn’t work out between them and they couldn’t
work together, he’d make sure she had at least the same level
of employment elsewhere, she knew this was her chance to discover if
dating her boss matched up to her fantasies.

It was the best
relationship she’d ever been in. Jemma only wished she had the
courage to tell Adam she was in love with him.

For the last week or so,
they’d been working hard on their pitch for the Walker account
- one of the largest accounts in the city. Now they just had to wait
and see if their pitch was successful
.

Still thinking about Adam
as she walked into the outer office, Jemma suddenly stopped in her
tracks. A gasp escaped her lips. Shards of glass littered the
carpet and a faint breeze wafted in through the broken window.
Scattered files covered the floor and her desk was in disarray.

She picked her way
through the open doorway into Adam’s inner sanctum. It looked
as if it had been ransacked. Fingers trembling, Jemma unzipped her
handbag and reached for her phone.

“
Why didn’t
you want me to call the police?” she asked curiously.

“
Because in a few
minutes we’re going to find out who did this. And if it’s
who I think it is, the police are the least of his worries.”

Adam clasped her hand and
led her into his inner office. Even in a serious situation like
this, she still felt the electricity of his touch. He walked over to
a tall, mahogany bookshelf, moved a couple of books aside, and
returned with a small, silver clock.

“
I took precautions
just in case something like this happened,” he said grimly.

Jemma watched in surprise
as he opened the clock and took out a small SD card.

“
After you told me
about Matt sniffing around for information on the Walker account, I
thought it would be wise to install a hidden camera.”

“
You don’t
think Matt had something to do with this,” Jemma protested.
“Do you?”

She bit her lip as they
watched the footage on Adam’s computer. Thankfully, both
office computers hadn’t been damaged during the break-in.

The video footage started
to play on the screen. A shadowy figure turned on the light in
Adam’s office. Although the person wore a balaclava, dark
trousers and a sweater, their height and build looked similar to
Matt’s. He or she rifled through Adam’s desk, then
flicked through a folder they found in one of the drawers. The
person grew more agitated as they couldn’t find what they were
looking for
.

Jemma watched, finding it
hard to breathe, as the intruder shook the folder upside down and all
the papers fell out of it. Moving around the office, they tossed
aside anything that was in the way. Only once the intruder
was
satisfied nothing had been missed in the search, did he take off the
balaclava with a gesture of frustration.

“
I don’t
believe it. He wouldn’t stoop so low.” She looked up at
Adam, shock written on her face.

He put his arm around her
and pulled her close, his fingers caressing her shoulder. “We’ve
just watched the evidence, Jem.”

“
He didn’t
find it. I put it in my safe at home. I made up a dummy file with
blank paper and put it in my desk drawer.”

“
Why?” Her
eyes flickered with curiosity.

“
In case something
like this happened. Anyway, we submitted our pitch on Friday. Even
if Matt had found the file, he’d still have to come up with his
own pitch.”

His face darkened. “I
think we’re going to have a talk with Matt.”

“
Why didn’t
you tell me you suspected this might happen?”

His hand stroked her
hair. “I didn’t want to worry you.”

Jemma leaned into the
caress. “But I was so worried this morning when I walked in
and found the office like this.”

“
But you didn’t
tell me. Don‘t you trust me?” She turned her face up to
his, her heart in her eyes. What if he hadn’t told her because
he
didn’t
trust her?

“
Of course I trust
you.“ His lips claimed hers. When he drew back to look at
her, he cupped her face. “I didn’t want you to be in an
awkward position if Matt asked you for information again.
That‘s
why I didn’t tell you.”

She started to speak but
he continued, “I knew you wouldn’t disclose anything, but
I didn’t want you to have to lie to him. And if he thought you
were being unco-operative, he might have thought aggression would
work in his favor.”

Jemma drew back slightly
and frowned. “Matt wouldn’t hurt me.”

Adam‘s jaw
twitched. “But he doesn’t mind hurting my business.”

Matt’s office décor
consisted of highly polished steel and glass fixtures. Jemma blinked
a couple of times, glad that Adam didn’t go in for such an
ultra-modern look. She supposed
it was the right look for a
man who wanted to be successful, no matter the cost. But she was
glad that Adam operated by a different set of rules.

Her eyes skipped past the
blinding décor as she faced her old college boyfriend.
Tension coiled inside her stomach as she looked at the man she once
thought she had loved.

Matt met their accusing
eyes without flinching. “That’s a nifty trick,” he
said in an admiring tone. “I’ll have to buy one of those
covert video cameras myself. Coffee?” He gestured to the pot
near his desk.

“
I don’t
think you realize how serious this is, Matt.” Jemma folded her
arms across her chest.

Matt‘s emerald eyes
snared hers. “Oh, I get it all right, Jemma. You caught me
breaking into your office and looking for something. So what? I
didn’t steal anything.”

“
Only because I put
the Walker file in a safe place.” Adam’s brows knitted.

“
So why haven’t
you called the cops?” Matt taunted.

“
I thought we could
resolve this ourselves,” Adam replied.

“
How?” Matt
rested his fist on his hip.

“
By you packing up
and leaving. I never want to see you again.”

“
And how does Jemma
feel about that?” Matt smirked.

Jemma took a deep breath.
“Ecstatic, actually.” She realized it was the truth and
felt a momentary pang of sadness that her relationship with the guy
she had once thought of as “the one” in college had come
to this.

“
I think you should
follow Adam’s suggestion. Leave and start your business
somewhere else. Preferably a long way away.” She looked him
straight in the eye, wondering what she had ever seen in him.

“
Because if you
don’t, I’ll give this video footage to the police.”
Adam’s eyes narrowed. “You’d be surprised how
quickly word spreads in the business community about shady business
practices.”

Matt snorted. “So
you’re going to run me out of town.”

Crazy Love by Tara Janzen
Floating City by Sudhir Venkatesh
Edge of Dawn by Lara Adrian
The Count of Castelfino by Christina Hollis
p19mrehm7610lfcse7nob5uv4m4 by Unknown
For the Save (Playing for Keeps #4) by Amber Garza
Rockstar Daddy (Decoy Series) by Fisher, K.T
Marissa Day by The Surrender of Lady Jane
The 42nd Parallel by John Dos Passos
Bev: The Interview by Bobbi Ross