Read The Book of Love Online

The Book of Love 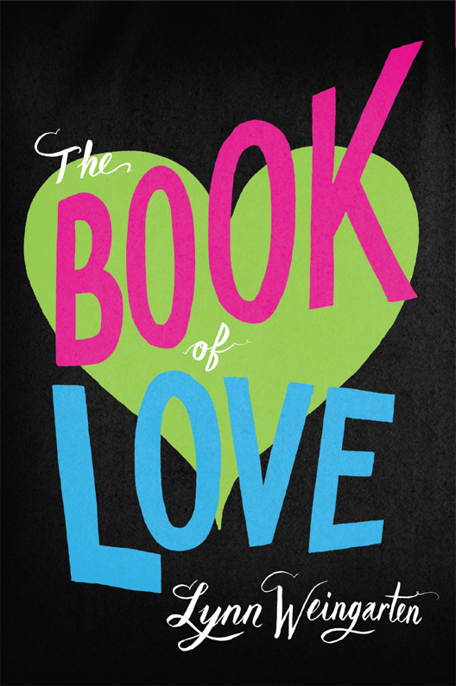 ON BREAKING A HEART

When you’re breaking a guy’s heart, it’s important to remember to look him in the eye.

He might not understand at first. He’ll think this is a joke or a dream. Surely he won’t have seen this coming. But, of course, you did.

Tell him he is wonderful, that you are sure that he is just perfect for someone, perfect for the person who is perfect for him. When he asks you if you really mean it, don’t turn away. Don’t stutter. Don’t blink. Don’t give him reason to think back and wonder what if, what if, what if. It’s only fair to dash all hope once you have what you want.

Look him in the eye for his sake. But mostly do it for your own.

If you can’t see his eyes, how will you know when the tears begin to fall?

P
icture it: blinking lights, glistening skin, dozens of bodies moving as one, and Lucy Wrenn in the center of the dance floor, shaking her hips to the beat.
Moonshine Party
was what the invitation had said.
Dress code: MOON LANDING
. So everyone dressed as astronauts, as space aliens, as cheese, or all in silver, and headed off to this gorgeous old theater.

The reason for the Moonshine Party was that Jack—eighteen years old, looked like a surfer, thought like a chemist—had been brewing up a big vat of it in the bathroom of the apartment he shared with some friends, and it had just finished, or ripened, or whatever it is moonshine does when it’s ready. The invitation read:

* It’s already been tested, so we promise you won’t go blind.**

The place could easily hold a thousand people, and on many nights it did, but on that particular night, there were just an intimate fifty, dancing, laughing, flirting under a high-domed ceiling from the center of which hung a huge chandelier, an entire planet of crystal and light.

Just then, the music changed from a fast thunking beat to something slow and slinky, and a guy who’d been trying in vain to get Lucy’s attention decided to try a little bit harder. Robin was his name, and he was not important in the slightest, although he certainly thought he was. He was absurdly good-looking and had made the mistake of thinking that mattered a lot more than it did. Lucy knew he had a girlfriend but that he was there by himself pretending he didn’t.

Robin leaned over. “What’s your poison, sexy?” he said. Robin was the kind of guy who would hear a line in a cheesy movie, and then say it to a girl thinking he’d made it up.

Lucy acted like she hadn’t heard him. He thought she was playing hard to get. He didn’t know she was impossible.

Lucy reached up and brushed her fingers over the tattoo that was peeking out over the top of her dress: a crimson heart, locked with gold, an aquamarine jewel-drop tear dripping off the point, and across the whole thing a violet
ribbon on which had been inked
Secret Sisterhood of Heartbreakers
. She was one of them now and had been for the past six weeks. This meant many things—it meant she had broken a heart within the first seven days of having been dumped by her boyfriend, and she had brought the brokenhearted tear to a secret group of girls who used the tear’s power to make her one of them. It meant now her heart was unbreakable and would be forever. It signified the fact that she could never again be sucked in by a jerk who didn’t deserve her.

It also meant she was magic.

The tattoo was invisible to anyone who didn’t have one herself, but at the party that night there were three people who did. Lucy’s brand-new sisters: Olivia, Liza, and Gil.

Liza was on the opposite side of the dance floor with her arms snaked around the neck of a broad-shouldered tough guy, who was grinning like a fool. She was tall, with long streaky hair, a huge mouth, strong legs, smooth skin. Think of the word
luscious
and that’s what she looked like.

Gil was over by the stage, brown eyes framed in a swoosh of silver eye shadow, short pixie hair spiked up. She was dancing with two skateboarder types, smiling and laughing as she did the moonwalk, the moon run, the moon shimmy and shake.

Off to the side, lounging in a big high-backed velvet chair, was Olivia, Lucy’s third sister, platinum haired, high cheekboned, lightly freckled, calmly and coolly observing everything, the way she always did.

Lucy’s and Olivia’s eyes met, and Olivia winked, the corner of her mouth curling up. She smiled as if they shared a secret, because they did.

Next to Olivia, there was Pete, who was desperately in love with her and was the host of this party. Pete was from London and was handsome and fine featured in a way that made it easy to imagine him out in a field riding a horse. There was a rumor going around that he was a complete genius, had graduated from college at nineteen, and was now writing his PhD dissertation on some new field of sociology that he’d created himself, and his constant party throwing counted as research. This big old theater was his house, where he lived with his two roommates, Betsy and Caramellow, who were cats.

Seven weeks ago, Lucy had never met any of these people. But they were part of her world now, her brand-new life.

And there next to Pete was a piece of her old one.

Floppy hair, a little bit of face scruff, a sweet smiley mouth, and squinty blue eyes that made him look like he was always laughing. Tristan. From far away it would appear he hadn’t dressed up at all, but if you got close to his feet, you’d see his gray Converse had been painted to look like the surface of the moon. Glued to the toe of one was a miniature rocket ship. To the other was an assortment of tiny aliens. He was leaning against the wall, slowly sipping a beer, and either didn’t notice, or didn’t particularly care, that there were three different girls appreciatively eyeing him from various parts of the room.

Tristan was Lucy’s best friend, or at least used to be. That day it was hard to say for sure what Tristan was. This was the first time they’d hung out in the six weeks since Lucy had inadvertently found out he loved her and had accidentally broken his heart.

Lucy watched as a curvy girl in a sequin dress danced over to him. The girl leaned down to get a closer look at his moon feet. She stood up laughing. They smiled at each other. Lucy felt a rush of something. Hope, that’s what it was. Hope that something would maybe start between him and this girl, or any girl, really. It was the secret reason she had invited him.

Lucy crossed her fingers as she watched them. Tristan looked up, saw Lucy staring, raised his beer, and tipped it toward her smirkily, a little joke about the kind of suave slickster who’d do that and mean it. And Lucy smiled at his mouth, his nose, his hair. She could not look him in the eye. Not anymore.

Everyone agrees it sucks to be in love with a friend who doesn’t love you back. But no one talks about how hard it is to be the friend.

The girl was gone now. Tristan waved Lucy over, and she danced her way toward him.

“I LOVE your shoes!” Lucy shouted when she reached him. “You made those, right?! They’re AWESOME!” She’d started overemphasizing everything, adding exclamation points to the end of every sentence, as though by staying relentlessly perky she could distract him from everything else.

Lucy pointed up to the ceiling. “Big chandelier, huh?! I hope it doesn’t fall and crush us!”

“Looks pretty sturdily up there!” Tristan grinned. Tristan kept his feelings on the inside and dealt with this the way he dealt with everything—by joking, by smiling, by trying to
make sure everyone else was having fun. He had no idea just how much Lucy knew.

Up on the stage, blue lights began to blink. “That’s my cue,” Lucy said. She felt a little flood of relief. She didn’t know how to act around him, but more importantly, she had no idea how to help him.

“Go get ’em, tiger,” Tristan said. And Lucy smiled and nodded and made sure not to look him in the eye so that for a moment, just a moment, she could pretend everything was okay.

L
ucy smiled out into the sea of silver. “Ready, boys?” she said. She turned halfway around to check. Behind her, Jack was dressed like a space professor and holding a guitar. B was wearing a glow-in-the-dark alien T-shirt and holding a
bass. In between them were two laptops, and off to the side a guy named Mica, who Lucy had never met before, was sitting behind a drum set, shirtless, wearing a silver Mylar blanket as a skirt. Apparently he always dressed like this.

Snatchers (A Zombie Novel) by Whittington, Shaun
Less Than Human by Meyer, Tim
Stripping It Down by Alden, Jami
I Hope You Dance by Moran, Beth
The Master by Melanie Jackson
Stephen Frey by Trust Fund
Bohanin's Last Days by Randy D. Smith
The Olive Conspiracy by Shira Glassman
The Recycled Citizen by Charlotte MacLeod
Hidden Vices by C.J. Carpenter