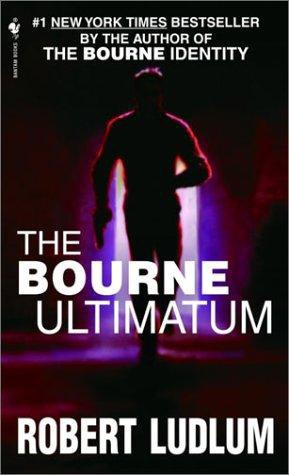 The station wagon raced south down a backcountry road through the hills of New Hampshire toward the Massachusetts border, the driver a long-framed man, his sharp-featured face intense, his clear light-blue eyes furious.

“We knew it would happen,” said Marie St. Jacques Webb. “It was merely a question of time.”

“It’s crazy!” David whispered so as not to’ wake the children. “Everything’s buried, maximum archive security and all the rest of that crap! How did anyone find Alex and Mo?”

“We don’t know, but Alex will start looking. There’s no one better than Alex, you said that yourself—”

“He’s marked now—he’s a dead man,” interrupted Webb grimly. “They’ll kill him and come after me ... after us, which is why you and the kids are heading south. The Caribbean.”

“There’s nothing to discuss.” Webb breathed deeply, steadily, imposing a strange control. “I’ve been there before,” he said quietly.

Marie looked at her husband, his suddenly passive face outlined in the dim wash of the dashboard lights. What she saw frightened her far more than the specter of the Jackal. She was not looking at David Webb the soft-spoken scholar. She was staring at a man they both thought had disappeared from their lives forever.

Ask your bookseller for the books you have missed

THE ROAD TO GANDOLFO

THE ROAD TO OMAHA

This edition contains the complete text of the original hardcover edition.

NOT ONE WORD HAS BEEN OMITTED.

A Bantam Book / published by arrangement with the author

No part of this book may be reproduced or transmitted in any form or by any means, electronic or mechanical, including photocopying, recording, or by any information storage and retrieval system, without permission in writing from the publisher. For information address: Bantam Books.

Bantam Books are published by Bantam Books, a division of Bantam Doubleday Dell Publishing Group, Inc. Its trademark, consisting of the words “Bantam Books” and the portrayal of a rooster, is Registered in U.S. Patent and Trademark Office and in other countries. Marca Registrada. Bantam Books, 1540 Broadway, New York, New York 10036.

For Bobbi and Leonard Raichert,

two lovely people who have enriched

Darkness had descended on Manassas, Virginia, the countryside alive with nocturnal undercurrents, as Bourne crept through the woods bordering the estate of General Norman Swayne. Startled birds fluttered out of their black recesses; crows awoke in the trees and cawed their alarms, and then, as if calmed by a foraging co-conspirator, kept silent.

Manassas
! The key was here! The key that would unlock the subterranean door that led to Carlos the Jackal, the assassin who wanted only to destroy David Webb and his family. ... Webb!
Get away from me, David
! screamed Jason Bourne in the silence of his mind.
Let me be the killer you cannot be
!

With each scissoring cut into the thick, high wire fence, he understood the inevitable, confirmed by his heavy breathing and the sweat that fell from his hairline. No matter how hard he tried to keep his body in reasonable shape, he was fifty years of age; he could not do with ease what he did thirteen years ago in Paris when, under orders, he had stalked the Jackal. It was something to think about, not dwell upon. There were Marie and his children now—David’s wife, David’s children—and there was
nothing
he could not do as long as he willed it! David Webb was disappearing from his psyche, only the predator Jason Bourne would remain.

He was
through
! He crawled inside and stood up, instinctively, rapidly checking his equipment with the fingers of both hands. Weapons: an automatic, as well as a CO
2
dart pistol; Zeiss Ikon binoculars; a scabbarded hunting knife. They were all the predator needed, for he was now behind the lines in enemy territory, the enemy that would lead him to Carlos.

Medusa
. The bastard battalion from Vietnam, the unlogged, unsanctioned, unacknowledged collection of killers and misfits who roamed the jungles of Southeast Asia directed by Command Saigon, the original death squads who brought Saigon more intelligence input than all the search-and-destroys put together. Jason Bourne had come out of Medusa with David Webb only a memory—a scholar who had another wife, other children, all slaughtered.

General Norman Swayne had been an elite member of Command Saigon, the sole supplier of the old Medusa. And now there was a
new
Medusa: different, massive, evil incarnate cloaked in contemporary respectability, searching out and destroying whole segments of global economies, all for the benefit of the few, all financed by the profits from a long-ago bastard battalion, unlogged, unacknowledged—non-history. This modern Medusa was the bridge to Carlos the Jackal. The assassin would find the principals irresistible as clients, and both camps would demand the death of Jason Bourne.
That
had to happen! And for it to happen, Bourne had to learn the secrets concealed within the grounds belonging to General Swayne, head of all procurements for the Pentagon, a panicked man with a small tattoo on his inner forearm. A Medusan.

Without sound or warning, a black Doberman crashed through the dense foliage, its frenzy in full force. Jason whipped the CO
2
pistol from its nylon holster as the salivating attack dog lunged for his stomach, its teeth bared. He fired into its head; the dart took effect in seconds. He cradled the animal’s unconscious body to the ground.

No
, countered his other self, David Webb.
Blame the trainer, not the animal.

Get away from me, David
!

The cacophony spun out of control as the crowds swelled through the amusement park in the countryside on the outskirts of Baltimore. The summer night was hot, and nearly everywhere faces and necks were drenched with sweat, except for those screaming as they plunged over the crests of a roller coaster, or shrieking as they plummeted down the narrow, twisting gullies of racing water in torpedo sleds. The garishly colored, manically blinking lights along the midway were joined by the grating sounds of emphatic music metallically erupting out of an excess of loudspeakers—calliopes
presto
, marches
prestissimo
. Pitchmen yelled above the din, nasally hawking their wares in monotonic harangues while erratic explosions in the sky lit up the darkness, sending sprays of myriad fireworks cascading over a small adjacent black lake. Roman candles bright, arcing bursts of fire blinding.

A row of Hit-the-Gong machines drew contorted faces and thick necks bulging with veins as men sought furiously and frequently in frustration to prove their manhood, crashing heavy wooden mallets down on the deceitful planks that too often refused to send the little red balls up to the bells. Across the way, others shrieked with menacing enthusiasm as they crashed their Dodge ’Em carts into the whirling, surrounding vehicles, each collision a triumph of superior aggression, each combatant a momentary movie star who overcomes all odds against him.
Gunfight at O.K. Corral
at 9:27 in the evening in a conflict that meant nothing.

Farther along was a minor monument to sudden death, a shooting gallery that bore little resemblance to the innocent minimum-caliber variety found in state fairs and rural carnivals. Instead, it was a microcosm of the most lethal equipment of modern weaponry. There were mocked-up versions of MAC-10 and Uzi machine pistols, steel-framed missile launchers and antitank bazookas, and, finally, a frightening replica of a flamethrower spewing out harsh, straight beams of light through billowing clouds of dark smoke. And again there were the perspiring faces, continuous beads of sweat rolling over maniacal eyes and down across stretched necks—husbands, wives and children—their features grotesque, twisted out of shape as if each were blasting away at hated enemies—wives, husbands, parents and offspring. All were locked in a never-ending war without meaning—at 9:29 in the evening, in an amusement park whose theme was violence. Unmitigated and unwarranted, man against himself and all his hostilities, the worst, of course, being his fears.

A slender figure, a cane gripped in his right hand, limped past a booth where angry, excited customers were hurling sharp-pointed darts into balloons on which were stenciled the faces of public figures. As the rubber heads exploded the bursts gave rise to fierce arguments for and against the sagging, pinched remnants of political icons and their dart-wielding executioners. The limping man continued down the midway, peering ahead through the maze of strollers as if he were looking for a specific location in a hectic, crowded, unfamiliar part of town. He was dressed casually but neatly in a jacket and sport shirt as though the oppressive heat had no effect on him and the jacket was somehow a requirement. His face was the pleasant face of a middle-aged man, but worn with premature lines and deep shadows under the eyes, all of which was the result more of the life he had led than of the accumulated years. His name was Alexander Conklin, and he was a retired covert operations officer in the Central Intelligence Agency. He was also at this moment apprehensive and consumed with anxiety. He did not wish to be in this place at this hour, and he could not imagine what catastrophic event had taken place that forced him to be there.

He approached the pandemonium of the shooting gallery and suddenly gasped, stopping all movement, his eyes locked on a tall, balding man about his own age with a seersucker jacket slung over his shoulder.
Morris Panov
was walking toward the thunderous counter of the shooting gallery from the opposite direction!
Why
?
What had
happened
?
Conklin snapped his head around in every direction, his eyes darting toward faces and bodies, instinctively knowing that he and the psychiatrist were being watched. It was too late to stop Panov from entering the inner circle of the meeting ground but perhaps not too late to get them both out! The retired intelligence officer reached under his jacket for the small Beretta automatic that was his constant companion, and lurched rapidly forward, limping and flailing his cane against the crowd, smashing kneecaps and prodding stomachs and breasts and kidneys until the stunned, angry strollers erupted in successive cries of shock, a near riot in the making. He then rushed forward, slamming his frail body into the bewildered doctor and shouting into Panov’s face through the roars of the crowd, “What the hell are
you
doing here?”