The Bride of Devil's Acre 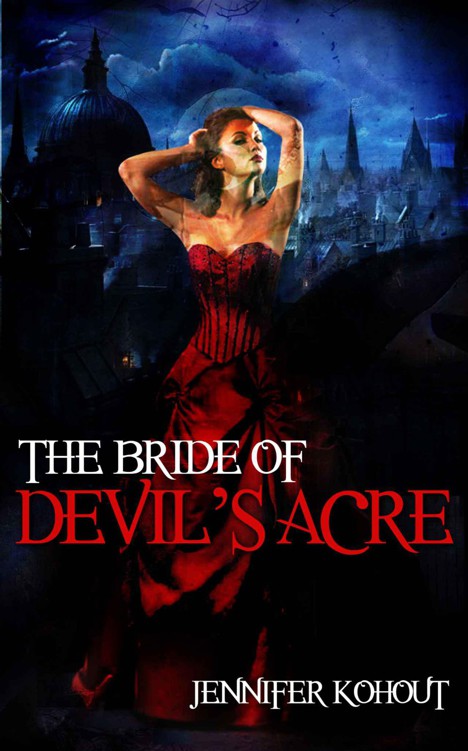 To my husband, I couldn’t ask for a better writing partner. Thank you for your support and gentle (
cough, cough
- relentless) encouragement with story structure.

I’d also like to thank Diogo Lando for the beautiful cover art. As always, it was a pleasure working with you.

Finally, I’d like to thank Jade at CreateSpace for her editing advice and patience with my incorrect comma usage.

OTHER TITLES BY JENNIFER KOHOUT

Heart pounding, Jacqueline fled to her room, slamming the door and throwing the lock. Chest heaving, she eyed the wood panel and prayed.

Please, God, not again
. It was such a simple prayer, but one destined to go unanswered.

“Get back here!” Lord John Edwards hollered, stumbling out of his study after his daughter. The world tilted, and a sharp pain shot up his leg as his knee met the black-and-white checkered floor of the foyer. Gripping the banister, he pulled himself to his feet. “I’m not done talking to you!”

Jacqueline could hear her father making his way up the stairs. The brandy slowed his progress and loosened his tongue. It was always like this when he drank. Lately, she had resorted to hiding the booze. She couldn’t remove it from the house, but she could move it out of sight—and mind.

Her father must have ordered one of the servants to bring him a bottle.

Heat prickled Jacqueline’s skin, a fine sheen of sweat breaking out across the back of her neck as her father’s uneven steps grew closer, an unsteady shuffle, hitch, and stumble that ended at her door.

“Open this door!” Lord John pounded on the door with his fist.

“Papa, please!” Jacqueline pleaded, knowing it did no good. Her father would spend the night outside her room, ranting until he consumed enough brandy and slipped into a drunken stupor. Only then would his valet come to collect him.

Jacqueline closed her eyes. It was going to be a long night.

“If it weren’t for you, your mother would still be alive!”

Pain sliced Jacqueline’s chest, the familiar accusation leaving an icy chasm forever between her and her father.

“I wish you had never been born! Do you hear me?” Lord John slammed his shoulder into the door. This time there was no pain. Slowly, he slid to the floor, his legs sprawled out in front of him. “It should have been you!”

Jacqueline pressed her forehead to the closed door, her palm flat against the cold wood. She wanted to go to him, to offer him the comfort he denied them both, but time had taught reaching out would do more harm than good.

“It should have been you!” her father sobbed.

“Is everything to your liking, my lady?” Benson asked.

“Yes, Benson.” To illustrate, Jacqueline took a bite of ham, chewing the tasteless meat before forcing it down with a sip of tea. “Please tell Mrs. Turner that everything was wonderful.”

It wasn’t the cook’s fault. The wait over her father’s impending arrival had robbed the meal of flavor, turning it to dust in Jacqueline’s mouth and drying the saliva necessary to swallow.

“Mrs. Turner will be pleased. Will there be anything else, my lady?”

Jacqueline’s father strode into the room.

“Good morning, my dear. I trust you slept well.”

Jacqueline stiffened, the stale odor of brandy tickling her nose as her father pressed a kiss to the crown of her head.

Lord John didn’t wait for his daughter to answer. “This is for you.”

Jacqueline watched as her father slipped the gift in front of her before retreating to his place at the head of the table. “You shouldn’t have—”

“Open it,” Lord John ordered, snapping his napkin and laying it across his lap. “Please,” he added, gently.

It broke his heart all over again, how much his daughter resembled his late wife with her rich mahogany hair and hazel eyes, and the chin that was just a tad too sharp. “It’s my stamp of stubbornness,” his wife had joked. Too bad she hadn’t been stubborn enough to survive childbirth.

Jacqueline stared at the gift, her hands frozen in her lap. The pale blue wrapping was always the same, as were the ivory ribbon and simple bow. She wondered who wrapped the gifts for her father, and if they ever wondered at the occasion.

Behind her, Benson discreetly cleared his throat.

Jacqueline reached for the gift, sliding the ribbon free and watching the paper fall away from the box. Inside, tucked between folds of tissue paper, was a white enamel music box. She lifted the gilded lid to reveal a singing bird, its mechanical beak opening and closing to an unfamiliar melody.

“It’s beautiful.” Jacqueline snapped the lid closed. Her father was watching her expectantly. The brandy had paled his skin, and regret lined the area around his eyes, but his hair was neat and his suit crisp. “Thank you.”

“You’re welcome.” Lord John sat back as Benson placed a plate on the table in front of him. “I thought you could add it to your collection.”

Jacqueline’s collection of music boxes, snow globes and figurines had grown steadily over the years. Each one was a gift from her father.

Jacqueline hated the collection. The delicate pieces were stored in a glass cabinet, protection not from the elements or a careless maid, but from herself and the ever-increasing desire to smash every single piece to bits.

“I’ll have Emme place it with the others,” Jacqueline said.

That settled, Lord John picked up his paper and took a sip of tea. “I thought perhaps you and I could visit the museum today. I heard they just acquired some new pieces from Egypt. I know how fond you are of anything from that dusty region of the world.”

Jacqueline forced a smile she was far from feeling and tried to accept the olive branch her father offered. If only the peace between them wasn’t temporary.

“I would love to, but I’ve had an invitation to visit Catherine this afternoon.” Jacqueline and Catherine had come out together three years ago.

Lord John’s face remained hidden behind his paper, but Jacqueline didn’t need to see it to know her father was unhappy.

“I thought Lady Morgan was increasing.” Lord John turned the page. “It would be unseemly for an unmarried lady such as yourself to be seen with a woman in her condition.”

“She delivered last month.” Jacqueline kept her tone light. It wouldn’t do to let on how much she was looking forward to this visit. Her father tended to take any interest she had in others as a personal slight. “A boy, I believe.”

“I’m surprised,” Lord John said. “I wouldn’t think you and Lady Morgan would have much in common.”

Jacqueline flinched as her father’s volley found its mark. “No, I suppose we don’t, now that Catherine is married with a child. But she’s still my friend, and I suspect she is eager to show off the baby.”

As Jacqueline rose, Benson stepped forward and pulled out her chair.

“Just remember we have the Hawthorns’ ball this evening.” Lord John didn’t bother coming out from behind his paper. “I expect you to attend as my guest.”

“Of course.” Jacqueline was keen to be on her way. It had been ages since she last saw her friend, and so they were overdue for a visit. “I’ll be back in plenty of time.”

Jacqueline hurried toward the door. At the last moment, she stopped and looked back at her father. “I love you, Papa.”

Lord John snapped his paper. “We leave for the Hawthorns’ at nine.”

Jacqueline waited, wanting to hear the words. She looked from her father to the delicate music box cradled in the palm of her hand. It would seem her father could give her anything, except the one thing she truly needed.

Devil studied the crude map of London. “Are you certain this is the best place to make the grab?”

Finn threw himself into a chair. “Aye, it’s the only thing I’m certain of,” Finn said. They were holed up in Devil’s office, an ornate room situated in the back of the infamous Purgatory club. Nestled in the heart of Devil’s Acre, Purgatory was the only thing separating London proper from the truly wretched souls existing in St. Giles.

“I’m not interested in having this discussion with you again,” Devil warned, without looking up. Finn was his most trusted man, a designation that wasn’t worth much when considering Devil didn’t trust anyone.

“Is that what that was? A discussion?” Finn glanced at his companion Moose, a retired fighter and absolutely no help. His meaty face was blank as he looked back and forth between Finn and their boss. “He calls that a discussion!” Finn said.

“You mistake this for a democracy, at your peril.” Devil finally lifted his eyes and pinned Finn with a glare. “You’ve made your feelings on the matter clear.”

“Have I?” Finn didn’t hesitate to ask. There were many who feared Devil, with good reason. With his black hair, green eyes, and slashing brows, the man resembled his notorious namesake. His reputation was one to match, as well, but it mattered not to Finn. Not because he garnered any special favors. Devil didn’t favor anyone, but alive or dead, it was all the same to Finn. “I wondered, since you’re still considering it.”

Devil leaned back in his chair, crossing his long legs at the ankles and folding his hands on the flat of his stomach. Finn was sprawled in his seat, Devil’s intricately carved desk the only thing between them. The Irishman had been with Devil for years, and, despite what Finn might think, that kind of longevity earned him a few free words. But just a few, and Finn was dangerously close to reaching his limit.

“The plan is perfect.”

“Aye, I know. It was my plan,” Finn said, cursing the day he mentioned it. “But are you sure there isn’t another way to get what you want?”

“There is always another way, but maiming and murdering seem an unnecessary escalation at this point.”

Finn pulled a face. “That’s not what I’m suggesting.”

“Then what, exactly, do you suggest?” Devil spread his hands. The question was rhetorical. “The man made it clear his vote was not for sale. And, as far as I can tell, he doesn’t indulge at either Purgatory or the Petal & Thorn, or anywhere else for that matter.”

Devil didn’t make a habit of exposing his customers and extorting their vices. His business depended on a certain amount of discretion, but Queen Victoria and her plans for Devil’s Acre and St. Giles had forced his hand. If Devil didn’t take action soon, he wouldn’t have a business to worry about. Unfortunately, the lord at the center of this unwanted discussion was a unique paragon of virtue.

“The man has to have something,” Finn insisted.

“You think I haven’t checked?” Devil had made it a point to become intimately familiar with the state of Lord Edwards’ affairs. The man cared for two things: his title and his daughter.